Read Force Me - Asking For It Online

Force Me - Asking For It 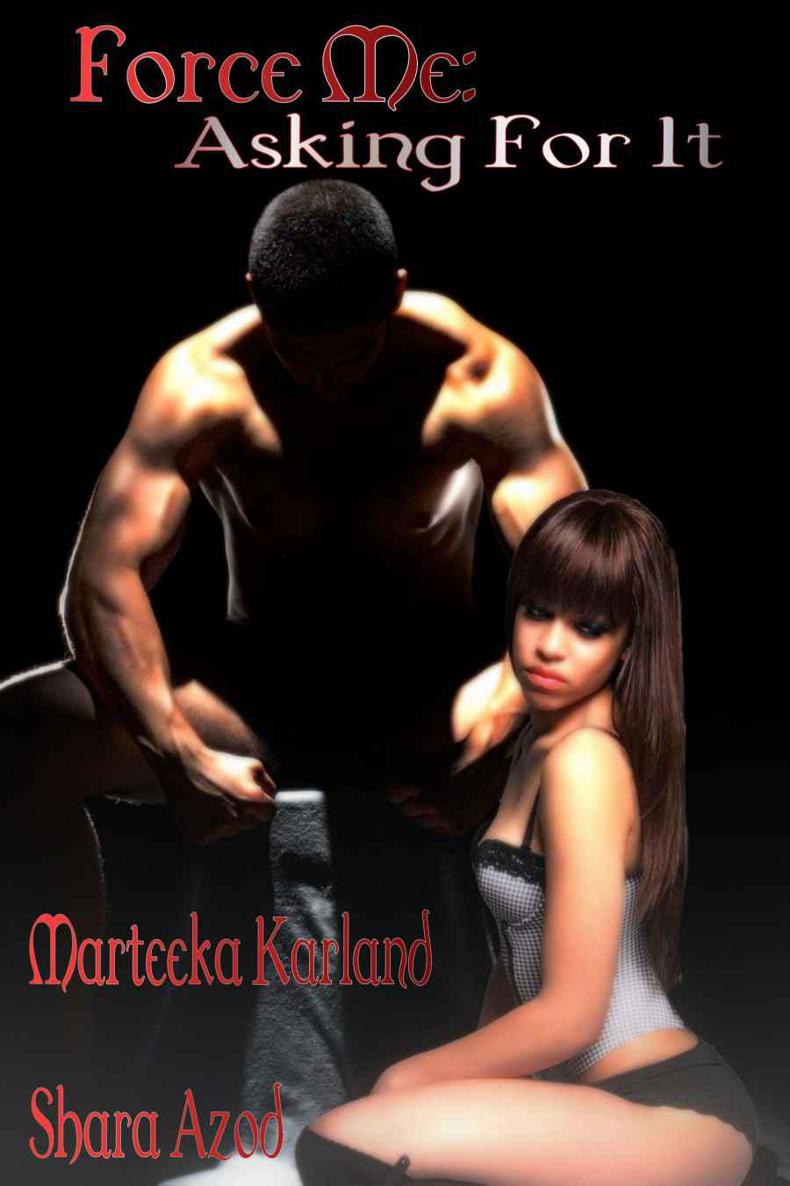 All rights reserved. No part of this book may be used or reproduced electronically or in print without written permission, except in the case of brief quotations embodied in reviews. This is a work of fiction. All references to real places, people, or events are coincidental, and if not coincidental, are used fictitiously. All trademarks, service marks, registered trademarks, and registered service marks are the property of their respective owners and are used herein for identification purposes only.
eBooks are NOT transferable. Re-selling, sharing or giving eBooks is a copyright infringement.

If she swished her ass in front of him one more time, Micaiah swore he was going to bend her over and spank that ass. Seriously, how much was a man supposed to take? Sure, he could have fired Little Miss Trina long ago. Yeah, she was good around the horses—even better with the books—but she was nothing but a walking, talking hard-on, and he’d been sporting blue balls for about two years too long. She may wear those jeans on the tight side, showcasing that lush round ass to perfection, but nothing about her suggested she would be up for the kind of loving he was itching to lay down.

Unfortunately, because he was reluctant to make any kind of moves on her, he had allowed himself to get to know Trina far better than he had ever allowed himself to know any woman. Damned if he didn’t like what he’d come to know. Trina was all feisty Southern, African-American woman, with a sweet streak a mile wide. She was meticulous in her work, playful in her demeanor, and too fucking sexy for Micaiah’s peace of mind. She’d managed to not only engage his interest on a sexual level, but everything about her dared him to take her and keep her, if he were man enough. He’d watched many a cowboy, trainer, jockey, even veterinarian try to get into her pants or her heart. He’d watched them all crash and burn, the devastating blow delivered with a smile and a few honey-coated words.

Fuck, he wanted her! His hands itched whenever she was near, his cock engorged, his brain ceasing to function correctly. If he fired her, all this would be over. He could go back to his life of being a cold-hearted bastard who pulled the women he wanted into his bed, never bothering to stay the whole night. He could blow their minds and leave them panting for more. That was what he excelled at. There were never any repeat performances—it gave a woman ideas. This son of a preacher man could not be tied down.

Tying down was something he really shouldn’t have thought about in Trina’s presence. Not while she pranced around his office prattling on about the quarter’s profits, expenses, and whatever hell else she was talking about.  Micaiah couldn’t really say. He was too busy trying not to see her tied hands above her head, helpless to stop him from feasting on those full, heavy breasts of her. All-natural globes of temptation that bounced even though she’d tried to encase them in bras that confined their bounteous goodness from prying eyes.

But he’d seen them, watched them, studied them, wanted them in his mouth, swaying in front of his face as she rode him like she rode his prized stallions. He wanted to watch as they nourished his children...

Holy hell! What the fuck had she done to him? He was NOT the marrying kind, goddammit, and he was going to prove it right, dammit, now!

She stopped fluttering around the room, almond-shaped brown eyes regarding him in wide-eyed wonder. He didn’t blame her. Anyone who worked on his horse farm knew the quieter his voice got the more serious he was.

Right there in the middle of his overly large office was an adult-sized replica of one of the horses found outside grocery stores. He’d built it himself, with a few modifications. As much as he didn't like to admit it, he got the idea about a month after Trina started working for him, in charge of the books and the rather large personnel issues. The saddle had been modified so that there were ridges right where a woman’s pussy would go. There were three speeds—one, slow and easy to build passion and tease mercilessly; two, alternation between the slow, easy speed and a rougher, faster tempo; and three, rough and fast.

Trina had no idea what the large sandy horse really was—an oversized sex toy. She had no clue that he’d built it for her. Hell, he’d just admitted it to himself.

“Excuse me?” She looked at the horse, then back to him, her brow frowned up all cute and adorable like.

“Get your sexy ass up on that horse.” Micaiah rose slowly from his seat, not giving a damn that, for the first time since knowing her, his painful erection was clearly present, and painfully obvious pressed against his jeans.

Deliberately he held her gaze as he unbuttoned the top of his jeans, unzipping just a little to give his dick a modicum of relief. He watched as her chest heaved, suspicious little pebbles appearing right where her nipples should be. She stood statue still as he walked over to tower over her. Short little thing that she was, he had a good foot and a half over her. He allowed his body to brush hers, destroying any personal space barriers she might have.

“Get up on the sandy horse. I won’t tell you again.”

It was painful not to reach out his hands and bring her closer against him. Harder still to watch as she moved to obey his wishes. Without an argument, she put one foot in the stirrup and swung her leg over the horse. Such a graceful mount she had. He was willing to bet she would mount him just as easily.

As soon as she was seated, he moved to her side.

“Lean forward,” he instructed, starting the horse on the first speed. The horse slowly rocked into motion, a semi-perfect parody of a real horse doing something between a trot and a canter slowly across the field. “Place your hands on the pommel. Grip the horse with your legs.”

The fact that she was allowing this, that she followed his instructions was heady, unbelievable, but oh so very welcome. Her actions were even better. A low moan left her lips, small white teeth biting into her bottom lip. If he reached over and pressed his fingers against her crotch, he would bet he’d find her wet.

“Why are you doing this?” Trina breathed, flexing her hips to go along with the gait of the horse.

Yes, that was it. But one thing would make it perfect.

“Sit up straight,” Micaiah ordered, walking over to a side table to retrieve a small length of rope. He’d forgotten why it was there in the first place, but he was oh so glad it was. “Hands behind your back.”

As soon as she did as he said, he secured her wrists together—not too tight, but enough so she couldn’t easily slip out.

“If you feel like you can’t hold your seat, let me know.”

“Mic— What are you...” Before she could get the question out, he turned up the speed, causing her to gasp. “Oh God, what are you doing to me?”

“Lean forward a little, Trina, but keep those thigh muscles tight around that saddle. Don't lose your seat.”

“That’s good, baby, just feel.” He wanted her so bad, but it was too soon. He wanted her crazy, wild with need. Still he couldn’t possibly keep refraining from touching her. Thankfully she was wearing a thin t-shirt, being as how his office was quite warm. Without a second thought he ripped it down the middle, allowing it to hang off her  as he pushed her bra cups down to expose her magnificent chest. Dark chocolate nipples elongated, sticking straight out in the air like perky little nubs of enticement. The sandy horse was the perfect height so all he had to do was lean forward and close his mouth around the closest, using his fingers to twist the other.

Trina bucked, almost sliding off as he suckled fervently with complete devotion. She was close—he could feel it. And he was about to lose his own head. Both of them.

“What are you doing to me?”  The groan was a sensual caress, wrapping around his dick and demanding he take her. He just couldn’t hold out any longer.

“Making you feel good,” he groaned right back, switching breasts. Suddenly he was inordinately jealous of the sandy horse he’d built just to watch her ride. He wanted to be between her spread thighs; he wanted to be what caused her to moan. What a naughty girl for making him want her so badly, so deeply he was casting off his long-held belief in single life. He'd known once he took her it would be forever; suddenly he just couldn't be moved to care. Grasping her around the waist, he lifted her off the horse. It was well past time he made Trina his.

Normally, he'd have preferred a bed, but damned if he could wait long enough to get her home. Besides, escorting her out of the office with her hands behind her back and her breasts exposed was
so
not going to happen. With an impatience he'd never felt in his life, Micaiah practically dragged her to his desk. One quick swipe of his hand and the contents of his desk scattered across the floor with a thud. He bent Trina forward, forcing her head to the hard wood until her cheek lay against it.

Micaiah stepped back, trying to allow himself to calm down. He wanted her with a passion that bordered on insanity! But if he took her like this—all need and no finesse—she'd likely resent him instead of embracing him.

"Do you have any idea how many possibilities that position affords? I'm so fucking hard thinking about all the wonderfully kinky things I can do to your body, I'm about to explode."

Instead of answering him, she looked back at him, her eyes dark with need, her cheek never leaving the desk. She pursed her jeans-clad bottom upward invitingly. A little whimper escaped her and Micaiah was a goner.

Reaching for her, he undid her pants and jerked them down to her ankles. It was impossible not to caress all that dark chocolate skin on the way back up. Silky smooth, her legs seemed to go on forever. How could such a petite woman have such fucking long legs! The only thing keeping him from the ultimate treasure was a tiny scrap of red lace snuggled between her cheeks and covering her cunt. Moisture glistened through the fabric, evidence he'd succeeded in arousing her.

To Love and to Cherish by Patricia Gaffney
Broken Trust by Leigh Bale
The Testament by John Grisham
The Darkest Lie by Gena Showalter
The Naked King by MacKenzie, Sally
The House at the Edge of Night by Catherine Banner
Killer Flies by William D. Hicks
Lynna Banning by Wildwood
A Little Harmless Obsession by Melissa Schroeder
Diary of a Grace by Sarra Manning
Our partner