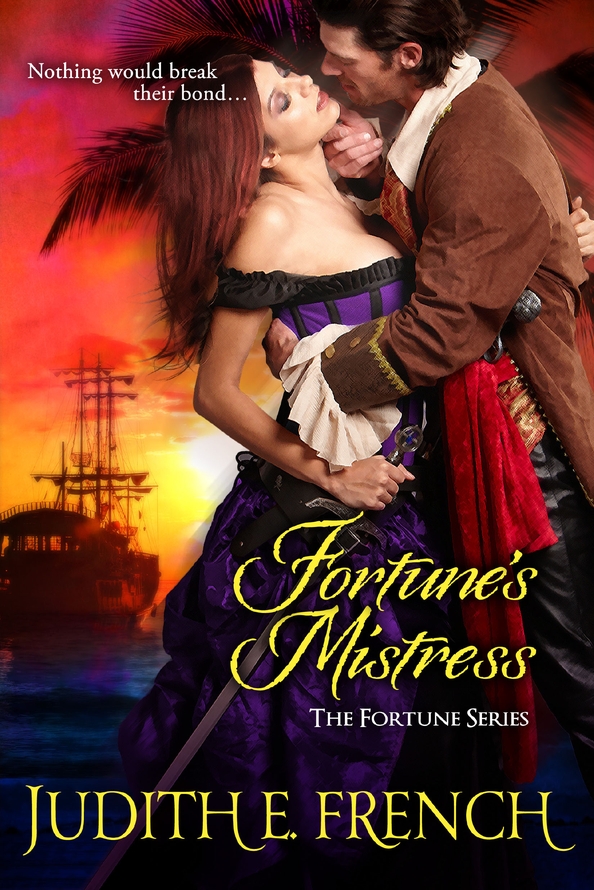 (Original RD March 1993. Re-issue Oct 2013)
A smuggler's spirited daughter and the dashing illegitimate son of King Charles II find they have more in common than meets the eye. . .
Chained together to prevent escape from the gallows, accused witch Lacy Bennett and pirate James Black appear destined for the noose. Only their quick wit and good looks save them from the violence of a hostile crowd. And thanks to a timely distraction, they are soon on a ship bound for the Caribbean--headed toward a hidden treasure. But false friends, treacherous greed, and danger at every turn only serve to bring them closer, and in each other they will find more to live for than gold. . .
150,000 Words

“ALL I’M ASKING FOR IS A KISS. NOTHING MORE
...”
She moistened her lips with the tip of her tongue. “One kiss then,” she dared.
His lips touched hers and their mouths joined, fitting together as easily as if they’d done this a thousand times before. “You’re so beautiful,” James murmured. “Lacy ... Lacy ...You know how to drive a man wild with wanting you.”
Butterfly wings fluttered in the pit of Lacy’s stomach. She’d had her share of kisses ... but none like this. This was like a bolt of lightning on a hot summer afternoon that rippled through her senses and made her sizzle ...
If You’ve Enjoyed This Book,
Be Sure to Read These Other
AVON ROMANTIC TREASURES
T
HE
M
ASTER’S
B
RIDE
by Suzannah Davis
M
IDNIGHT AND
M
AGNOLIAS
by Rebecca Paisley
M
Y WILD
R
OSE
by Deborah Camp
O
NLY
W
ITH
Y
OUR
L
OVE
by Lisa Kleypas
A R
OSE AT
M
IDNIGHT
by Anne Stuart
Coming Soon
His M
AGIC
T
OUCH
by Stella Cameron
Avon Books are available at special quantity discounts for bulk purchases for sales promotions, premiums, fund raising or educational use. Special books, or book excerpts, can also be created to fit specific needs.
For details write or telephone the office of the Director of Special Markets, Avon Books, Dept. FP, 1350 Avenue of the Americas, New York, New York 10019, 1-800-238-0658.
FORTUNE’S
MISTRESS
JUDITHE FRENCH
An Avon Romantic Treasure

Rushed by Brian Harmon
Charming You (Thirsty Hearts Book 1) by Kris Jayne
The Major and the Pickpocket by Lucy Ashford
The Emperor's Silver: Agent of Rome 5 by Nick Brown
Caprice and Rondo by Dorothy Dunnett
A Wall of Light by Edeet Ravel
Life With Toddlers by Michelle Smith Ms Slp, Dr. Rita Chandler
Under An English Moon by Bess McBride
Alien General's Fated: SciFi Alien Romance (Brion Brides) by Voxley, Vi
Henry and Jim by J.M. Snyder
Our partner