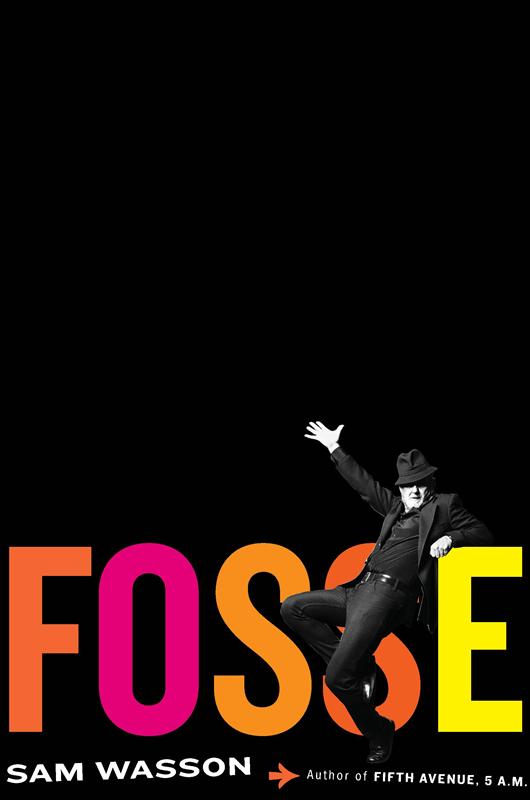 One Hour and Fifty-Three Minutes

For this book’s family:

How much time do I have?

G
WEN VERDON, LEGALLY
Mrs. Bob Fosse, was smiling big. She had perched herself in the foyer beside a tray of champagne flutes so that, with the help of a few servers, she could pass them out between air-kisses and the occasional embrace. Verdon held herself with a poise befitting her legacy as the one-time greatest musical-comedy star in the world, and though her glory days were far behind her, one could immediately recognize the naughty, adorable, masterfully flirtatious song-and-dance girl Broadway had fallen in love with. Fosse’s best friend, Paddy Chayefsky, had called her the Empress.

Around eight o’clock, the flurry of famous and obscure, some of them in black tie, others dressed merely for a great time, hugged and kissed their way off the pavement and into Tavern on the Green. They passed Verdon as they headed down the mirrored hall to the Tavern’s Crystal Ballroom, a fairy-tale vision of molded ceilings and twinkling chandeliers where light was low and sweet and a dark halo of cigarette smoke hovered over the ten-piece band. They played before a wide-open dance floor and dozens of tables apoof with bouquets. Each place was set with a miniature black derby,
a tiny magic wand, and a little toy box that, when opened, erupted with cheers and applause.

For Fosse’s haute clique of friends, lovers, and those in between, the night of October 30, 1987, was the best worst night in show-business history. In work or in love, they had all fought Fosse (in many cases, they had fought one another for Fosse), and they had always come back. No matter the pain he caused, they understood that on the other side of hurt, grace awaited them. His gift—their talent—awaited them. But now that Fosse was dead—this time permanently—many wondered how his wife, daughter, and armies of girlfriends, separated by their own claims on his love, would learn to hold his legacy.

The site of sundry Fosse movie premieres and opening-night bashes, Tavern on the Green had hosted the oddest pairings of writers, dancers, and production people, old and young, sober and drunk, but tonight, the dance floor seemed to scare them away.

People talked in separate clusters. Liza Minnelli cut a line through the procession, squeezed Verdon’s hand, and made her way toward Elia Kazan. Then came Roy Scheider. Without stopping, he nodded at Verdon and eased past Jessica Lange, who was wallflowering by Fosse’s psychiatrist, Dr. Clifford Sager, and Alan Heim, editor of Fosse’s autobiographical tour de force
All That Jazz.
“Alan,” producer Stuart Ostrow said, “you know, Bob always said
you edited his life.” There was Cy Coleman; Sanford Meisner; Buddy Hackett; Dianne Wiest; Herb Schlein, the Carnegie Deli maître d’ who kept linen napkins set aside for Bobby and Paddy, his favorite customers for twenty years. Where was Fosse’s ally and competitor Jerome Robbins? (He was free that night, though he’d RSVP’d no.
) Peering into the crowd, Verdon spotted what remained of Fosse’s closest friends—Herb Gardner, E. L. Doctorow, Neil Simon, Steve Tesich, Peter Maas, Pete Hamill—all writers, whom Fosse idolized for mastering the page, the one act he couldn’t. They were slumped over like tired dancers and seemed lost without Paddy, Lancelot of Fosse’s Round Table. “If there is an afterlife,”
Gardner said, “Paddy Chayefsky is at this moment saying, ‘Hey, Fosse, what took you so long?’”

Before his cardiac bypass, Fosse had added a codicil to his will: “I give and bequest the sum of $25,000 to be distributed to the friends of mine listed . . . so that when my friends receive this bequest they will go out and have dinner on me.”

Fosse thought the worst thing in the world (after dying) would be dying and having nobody there to celebrate his life, so he divided the twenty-five grand evenly among sixty-six people—it came out to $378.79 each—and then had them donate that money back to the party budget so that they’d feel like investors and be more likely to show up.
Bob Fosse—the ace dancer, Oscar and Tony and Emmy Award–winning director and choreographer who burned to ash the pink heart of Broadway, revolutionized the movie musical
twice,
and changed how it danced—died hoping it would be standing room only at his party, and it was. Many more than his intended sixty-six shouldered in—some thought over two hundred came that night—but after a lifetime in show business, having amassed a militia of devoted associates, he had not been sure they all really
really
loved him. Had he been there, Fosse would have been studying their faces from across the room, keeping track of who told the truth and who told the best lies. Who really missed him? Who pretended to? Who was acting pretentious? Who was auditioning? He would have called Hamill and asked him
later that night, waking him up, probably, at two in the morning. Fosse would fondly and faithfully deride the bereaved, but underneath he’d be worrying about the house, how many came, where they laughed, and if they looked genuinely sad.

“This is incredibly sad,”
said Arlene Donovan on one side of the room.

“I’m having the best time,”
said Alan Ladd Jr. on another.

Roy Scheider, who had played a version of Fosse in
All That Jazz,
scrutinized every detail of the party scene from behind his cigarette and said, “It was as if he was orchestrating it.”
He laughed.

By midnight many had said their goodbyes, but you wouldn’t know it to hear the band, grooving hard on their second wind. Ties were loosened. High heels dangled from fingers. Only the inner circle remained. Here was Fosse’s daughter, Nicole. Here was Gwen Verdon, his wife. Here was Ann Reinking, Fosse’s friend and girlfriend of many years. Along with his work, they were the living record of his fervor, adored and sinned against, difficult to negotiate, impossible to rationalize.

In a quiet room
away from the clamor, Fosse’s last girlfriend, Phoebe Ungerer, wept. Then she left.

Suddenly Ben Vereen
flew to the dance floor. He threw his hands into the air and then onto his hips and started slithering. At first he was alone, but moments later the crowd caught on. Reinking followed with Nicole
and the eternal redhead, Nicole’s mother, the Empress. The bandleader upped the tempo to a funk sound with the kind of heavy percussion Fosse loved, and Fosse’s three women moved closer
together. Verdon, sixty-two; Reinking, thirty-eight; and Nicole, twenty-four—wife, mistress, daughter—started swaying, their arms entwined, moving together in an unmistakably sensual, sexy way. Their eyes closed and their bodies merged with the beat, pulsing together, like a hot human heart. Others joined them. First ex-girlfriends, then writers. A circle formed, closing in around the women, then opened, then closed, ceaselessly breaking apart and coming together. Grief and laughter poured out of them in waves.

H
E WAS LOSING
to the blank page.
The problem was not that Bobby Fosse didn’t know how to draw; it was that he didn’t know what to draw to please them a second time. A year earlier, in fourth grade, he had drawn a picture they loved, a rowdy, funny Halloween parade of ghouls and goblins. His teacher was so impressed she sent his artwork to the Field Museum, one of Chicago’s finest cultural institutions, and for a short time, it hung on the wall there, and his friends and family went to admire it, and him, the young genius of Ravenswood Elementary. Fosse had known then that a repeat success would be expected of him the following year, and as Halloween came around again, he felt the grownups peering over his shoulder and onto the blank page, a mean mirror as white as death. Out of ideas, he colored it with the same figures he’d used in the fourth-grade drawing, the same ghouls and goblins, and presented the finished work to his teacher, who was obviously not impressed; she did not send it to the Field Museum, his friends and family did not come, his head was not patted, and Fosse’s drawing career was over.

His father, Cyril Fosse, was also a failure. He failed in show business. “By the time I was born,
he was a salesman,” Fosse said, “but he told me about the act.”
The act:
the words lit up Cy’s face. He described it to his son as the greatest show on earth. “It was probably one
of the worst acts I’ve ever heard in my life,” Fosse said. “But he was very romantic about it.” Cy played the spoons, his brother did some trick stuff with the piano, and in between the four threw their arms around one another and sang barbershop quartet. For the finale, one of them would snap a bedsheet over the piano, and Richard Fosse—wearing a blindfold and thick canvas gloves—played requests to oohs and aahs. Cy told all this to little Bobby Fosse, weaving a colorful tale of bygone glories and heroic saves. He insisted that they’d made a few rounds of a third-rate vaudeville circuit before Uncle Richard got cancer. When Richard’s leg was amputated, the act ended. When Richard died,
Cy gave up hope of a revival.

Now the closest he got to the spotlight was singing for a local Norwegian choral group.
Other than that, Cy Fosse was ordinary, no unhappier than the next guy. Round of face and gut, he was a kind enough man, a good Methodist and a proud father, but he guarded his own blandness in a way Bobby found punitive. “[Cy] would always eat
a wedge of iceberg lettuce with salt [only] and wouldn’t try anything else,” Ann Reinking recalled. “He ate it that way until the day he died. He was so right-angled. It bothered Bob.”

Cy always seemed to be on the road, supposedly hard at work for the Hershey Chocolate Company. Bob would remember him as being closer to Willy Loman than George M. Cohan, and he saw his mother, Sadie, a 235-pound former spear-carrying
extra in the opera, as something like Cy’s general manager. “My mother was
an old-time matriarch,” he said. “She left school at thirteen, but she knew every word in the dictionary. She ran the home, but she wisely allowed my father to think he did.” Sadie had a heart problem.
She did the best she could with the housework, but some days, or weeks, she struggled to get out of bed and make supper for the family. Her illness put an extra strain on Cy, already whipped by the Depression, but he hauled the family through on the strength of his midwestern work ethic. He bought them a home with a little front yard and a little backyard in a pleasant enough section of Chicago’s middle-class North Side, where nothing was more than a few blocks away and neighbors always knew one another’s business. The house at 4428 North Paulina had room enough for their five children—Cyril Jr. (called Buddy), Edward, Donald, Patsy, and Robert Louis Fosse, the youngest Fosse and by far the cutest, born June 23, 1927, sixty years before he died.

Swim That Rock by John Rocco
Desolation Point by Cari Hunter
Pathfinder by Julie Bertagna
Poetic Justice by Amanda Cross
Super Fast, Out of Control! by Louis Sachar
Savage Night by Jim Thompson
Wrong Number 2 by R.L. Stine
Sweet Baklava by Debby Mayne
When We Were Wolves by Jon Billman
Saved by a SEAL (Hot SEALs Book 2) by Johnson, Cat
Our partner