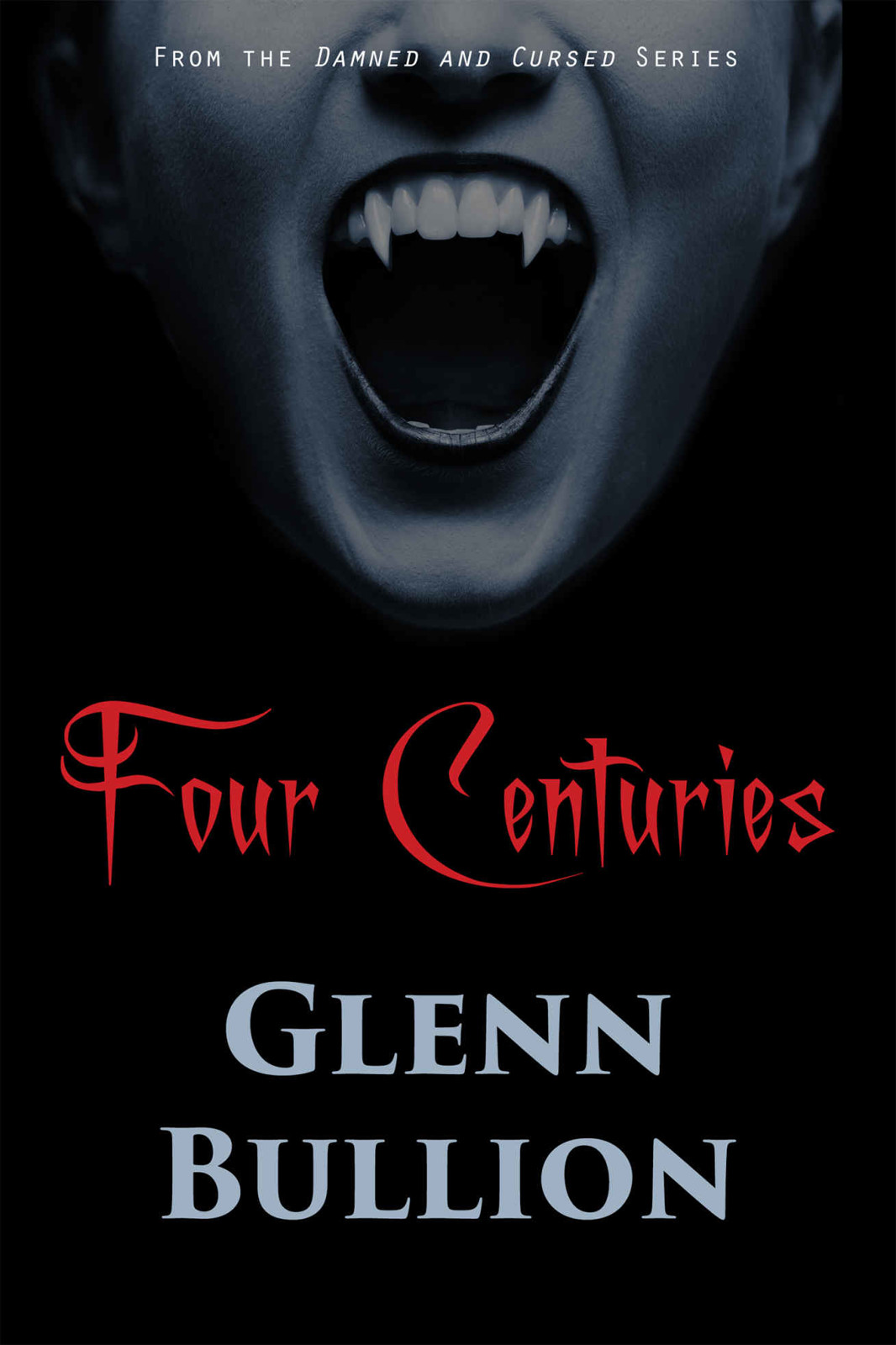 Names, characters, places, and incidents are either products of the author's imagination or used fictitiously.

Any resemblance to actual events, locales, or persons, living or dead, is entirely coincidental.

No part of this publication can be reproduced or transmitted in any form or by any means, electronic or mechanical, without permission in writing from Glenn Bullion.

Victoria laughed and smiled graciously, with an air of flirtation that disarmed most mortals.

"Actually, closer to four-hundred and fifty-one."

The middle-aged man staring at her driver's license rubbed his eyes to make sure he was seeing things clearly.

The name plate sitting on his desk identified him as Gary.

Gary glanced up and down from the license to Victoria, before his eyes traveled along her curvy figure.

His cheeks turned red from embarrassment and attraction, and she detected a slight change in his scent.

Lust, no matter how small, had a distinct smell.

"Uh," he stuttered, doing everything he could to keep his gaze locked on her license.

Lots and lots of plastic surgery."

"Your doctor deserves a medal."

He pushed his chair back and looked past the walls separating his desk, his tiny world, from his fellow employees on both sides.

"Hey, Danielle, check this out.

We've found the Fountain of Youth over here."

Victoria crossed her legs, uncomfortable with the attention and unprofessional behavior, yet keeping the smile on her face.

She could fake being mortal with the best of them.

She laughed shortly and thanked Danielle graciously as the praise poured in.

Every compliment centered around the thought of
you look so good for your age
.

They had no idea.

She'd spent most of that time working from the shadows, but still accomplished much.

She'd saved lives, sometimes entire countries, possibly even the world here and there.

She'd come to terms with what she was, and the never-ending thirst that was a constant companion.

Still, as far as challenges went, she'd rather spend twenty minutes going fang-to-claw with a werewolf than waiting in line at the Department of Motor Vehicles.

The DMV was crowded, as she imagined it typically was.

Miserable men and women from all walks of life fidgeted in place, stared at their mobile phones, frowned at the clock on the wall.

Gary and Danielle should have been tending to the people waiting their turn, but instead would rather fawn over the shape of a woman they thought to be five decades old.

Victoria sensed some of the glares she was getting.

Some rolled their eyes at the sight of employees wasting their time talking with Victoria.

"My ex, when we were dating—I'm single now," Gary added.

"She has the same last name as yours."

I think I'd remember you at any family dinners."

As flattered as she was, she simply wanted to renew her driver's license and leave.

She didn't have a boyfriend, liked to go on the occasional date, but had the feeling Gary wasn't her type.

He processed her renewal with agonizing slowness, no doubt in an attempt to keep her at his mercy a while longer.

Victoria remembered when automobiles slowly gained traction in the world.

She remembered when the first laws were put into place to regulate their use.

She remembered her first speeding ticket, given to her by a handsome policeman named Roger.

They'd spent the evening together and she fed from him that same night.

There was the first time she renewed her license, so long ago.

Special arrangements had to be made due to the fact that vampires and the sun didn't mix very well.

Surprisingly, with the technological advancements humans had made, going to the DMV was still painful.

"I'm sorry this is taking so long," Gary said.

"No trouble at all."

"What do you have planned for the day?

Where are you heading after here?"

Victoria smiled, glad to finally have the chance to say something honest, at least partially.

She had a task looming before her, but not until later.

"I think today I'm just going to enjoy being outside."

I've been cooped up in here all morning.

"Believe me,
any
day outside is nice."

It was another ten minutes of one-sided flirting before she was finally able to sit up straight in the chair and stare into the camera.

Being a vampire had its drawbacks.

She often wondered what it was like to taste a pepperoni pizza, or a spoonful of ice cream, without getting sick.

However, being photogenic was one of the many perks.

Her figure was enhanced by the supernatural.

She would always have a tone body, beautiful skin, bright red hair.

Her complexion was fair; her skin would never tan.

But that was a minor quibble.

The mortals she lured away into the darkness for a quick sip certainly didn't complain about her pale skin.

Her lip curled into a smile as she looked over her license, at features that would never change.

Five and a half feet tall.

The woman staring back at her easily passed for thirty years old.

Her smile faded as she sensed Gary continuing to stare at her.

She had to get moving before he dropped to one knee and proposed.

Gary and Danielle's amazement at
how good she looked for her age
reinforced a sad thought.

A change in identity was inevitable, and it drew closer than she would have liked.

"I'm afraid we are," he said, sadness in his voice.

"But it was a pleasure.

Next time, though, you can always renew your license online."

Victoria flinched at this new information.

She suddenly felt very old, which she was.

When did this happen?

She could have skipped the tantalizing trip to the DMV completely?

She made a mental note to yell at Kevin Mishnar, one of her dear friends.

Kevin was a full-blooded witch, and enjoyed technology as much as he did cats and brewing mysterious potions.

It was his job to keep her updated on all the latest happenings in the tech world, and avoiding the DMV should have been high on that list.

She managed to smile once again, so she wouldn't frown as she walked away.

Leaving Gary and Danielle behind, her sense of smell thanked her as she stepped into the morning air.

The scents of unwashed underarms and dirty clothes vanished as the daylight greeted her.

She closed her eyes and enjoyed the moment, reaching out with her nose and ears, her favorite two senses.

A dog urinated on a tree not far away, the scent of urine mixing with a rosebush.

A man and woman argued in a parked car about a boyfriend the woman had on the side.

A mother quickly crossed the street, holding her daughter's hand, while they talked about what they were going to eat for breakfast.

A man bumped into her harshly as he made his way inside.

He didn't apologize, didn't slow down.

He simply pushed past Victoria rudely, reminding her that not everyone shared her love of the morning.

"And good morning to you, too," she said.

Through the glimpses into the lives of the couples, families, and assholes around her, she remained aware of one thing.

The sun felt wonderful on her face.

The clouds parted momentarily, and the light that most mortals took for granted caught her eye.

She raised her hand, blinded, before fishing in her purse for her cheap sunglasses.

A grin took hold as she allowed herself another moment of reflection.

A vampire with sunglasses.

She hoped there would never be a time when she reached for them and didn't appreciate the unique position she was in.

She'd spent centuries away from the day, living her life constantly keeping sunrise and sunset in the back of her mind.

The last time she saw the sun with mortal eyes was the day her family was slaughtered by the vampire that changed her.

She helped her father in the fields, helped her mother cook dinner, and then went to bed.

She woke up to screams and blood, before being brutalized herself.

Never once did she see their attacker, or even hear him make a noise.

She wasn't sure what consumed her the most those first hundred years.

Trying to find the vampire that killed her family, or never seeing the sun again.

Then the witch popped into her life.

When Victoria met Kevin Mishnar she broke his neck and buried him in a coffin.

The supernatural world didn't agree on much, but they all agreed that a witch was too powerful to be left alive.

Magic had no place in the mortal or supernatural world.

It didn't matter if the witch was a frail old woman, a young child, or a lively teenager.

But Kevin wasn't easy to kill, and somehow, some way, the two became friends.

It was Kevin's magic that let her walk in the day.

Victoria was the only vampire that could.

She crossed the parking lot and headed toward her Porsche, the favorite of the vehicles she owned.

Despite the clouds threatening overhead, she rolled the top back as she settled behind the wheel.

A little rain never hurt anyone.

Armed with her new license, she had some time to herself, a rare thing.

She'd made her millions a long time ago, and hadn't worked a real job in quite a while.

Still, it seemed her time was always in demand for one reason or another.

Starting her car, she leaned back in the seat and thought of something fun to do.

Despite her age, Victoria wasn't a complicated woman.

She liked to go out, watch movies, enjoy Baltimore, spend time with friends.

The local movie theater was five minutes away, and she had several bottles of blood on ice in the trunk to get by.

There was her upcoming chore, but she had plenty of time to catch a movie or two.

Perhaps there would be a delicious man or woman sitting in the dark who wouldn't mind a vampire slipping a pair of fangs into their neck.