Four Dukes and a Devil 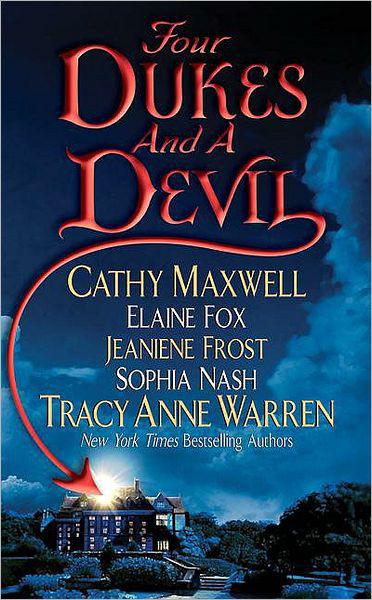 Four Dukes and a Devil

The Duke Who Came to Dinner

Catch of the Century

Charmed By Her Smile

B
ut what about love?" Miss Susan Rogers had anticipated Lady Theresa Alberth’s question. It was the mental inclination of young women nowadays. She understood because she’d also once believed love was the only true concern when it came to marriage. But now, at six-and-twenty and firmly established as a spinster, she knew differently.

Lady Theresa was Lord and Lady Alberth’s only child. They sat on chairs next to their daughter and turned to Susan as if they, too, needed an answer.

Susan set her cup and saucer on the side table next to her chair. She knew her role. It was to convince Lady Theresa to obey her parents’ wishes.

“Love is important,” Susan agreed, very certain of herself and her message. After all, she’d given this lecture numerous times over just the last week as anxious parents with willful daughters had sought out her services. “But is it more important than compatibility? Than security? You will have children someday, Lady Theresa. What do you hope for them?”

“I’m not going to tell you,” Susan continued, “that it is as easy to love a wealthy man as it is a poor one. Or that you have obligations to your family line. I’m certain your parents have already told you all that.”

Lady Theresa nodded, her expression tense. Lady Alberth had confided in Susan earlier that their daughter believed herself in love with their land steward’s son, a Mr. Gerald Grover. They were hiring Susan to convince her differently. They wanted a good family for their daughter, and a title.

“What they say is true,” Susan said matter-of-factly. “However, that doesn’t change how one feels when one is in love.”

Susan leaned forward, reaching for Lady Theresa’s hand. The girl gave it to her. “I’m going to advise you to remember that love
must
be tested. It can be a liar, a
thief.
”

Lady Theresa shook her head, but Susan pressed on. “Let me tell you my story. I was once in love. I would have willingly sacrificed everything for him. He said he loved me, too, and we were to marry. One week before the wedding, both of my parents died in a coaching accident.”

“Oh, dear,” Lady Alberth said. Her husband’s expression had gone grim. Lady Theresa listened, that frown between her brows deepening as she placed herself in Susan’s position.

“My two younger sisters and I were alone,” Susan said. “The estate went to a cousin, who did not want the responsibility of us. My betrothed had told me he loved me. It was only natural I turned to him in this difficult situation. He said everything would be fine, but on the day of our wedding, he didn’t appear for the ceremony.”

“You were left at the altar?” Lady Alberth asked.

Susan nodded. “Publicly humiliated.” The words no longer embarrassed her. She’d said them too often…to other girls…in front of other parents. “You see, my gentleman had been informed an hour before we were to be wed that my cousin refused to pay my dowry. He had other plans for the money.” She gave Lady Theresa’s hand a squeeze. “Don’t be foolish as I was. Is it so much for your parents to ask you to participate in one Season? Is your love so fragile it would not survive a few parties, a couple of balls?”

Lady Theresa looked to her parents. “Does that mean I may marry Gerald if I go through a Season?”

“The lad is unsuitable—” her father started.

“You must follow
my
guidelines,” Susan said, directing her comment to Lady Theresa but boldly cutting her father off. No good came from arguing with a young woman who thought she was in love.

To his credit, Lord Alberth shut up.

“If you believe in love, then this young man—what is his name?”

“If Gerald is the one, nothing will sway your love for him, but
you
will be certain,” Susan assured her. “There is much at stake. I’m certain you wish to please your parents. And you don’t want to look back in life and wish you’d had the fun and excitement of at least one Season. Just one.”

Lady Theresa nodded solemnly. The frown line was still there.

Susan smiled. “So, will you join me? Just for this Season?”

“You will enjoy yourself immensely,” Susan promised.

“I shall endeavor to try,” she said, directing her vow toward her anxious parents. “I will.”

“That’s all we can ask, kitten,” her father said.

Lady Theresa stood. “If you will excuse me?”

Her parents nodded. Lady Theresa gave a graceful nod to Susan and left the room.

“Well done,” Lord Alberth said, when his daughter was out of earshot. “We’ve been attempting to bring her to this conclusion for weeks.”

“She is very much ‘in love,’” Susan observed.

“They
all
are at this age,” Lady Alberth said. “I blame myself for not having been more vigilant over her when she was around Gerald Grover.”

“They played together as children,” her husband said dismissively. “You couldn’t have seen it coming. After all, we thought we’d raised her better than this.”

“No, he isn’t. But he’s not
suitable,
” Lord Alberth said, and that was that. He changed the subject. “You handled her very well, Miss Rogers. And you come to us highly recommended. However, I do have a concern about your fee.”

“My fee is not negotiable, my lord. Over the past four years, I have seen not only to the marriages of my sisters to respected, highly placed men—” She did not need to add the word “wealthy.” It was assumed. “—But also the marriages of several of your peers’ daughters. Lady Theresa is not the first girl to be in love with an unsuitable man at the beginning of the Season and wed to a
suitable
man by the conclusion of it. With my guidance, of course.”

“And Miss Rogers knows a great deal, my lord,” Lady Alberth chimed in, “that not even we know. Matters I wouldn’t have thought of.”

Lady Alberth shot Susan a bright smile. “Tell him about the Irish Duke.”

The “Irish Duke” was turning out to be a very fine selling point for Susan’s services. It exhibited her complete knowledge of the Rules of Society. Several weeks ago she’d discovered an odd bit in the Order of Precedence, the list that determined ceremonial importance for the peers of the Realm.

She now explained to Lord Alberth. “You would be pleased if your daughter married a duke.”

“But what if I told you not all dukes are the same? For example, in the Order of Precedence, the Irish Duke will always be at the end of the line.”

Lord Alberth frowned. He had the same frown line between his brow as his daughter.

“For state dinners,” Susan assured him, “the Irish Duke and his duchess will sit at the foot of the table if there is no one but dukes in attendance. They will be the last to enter to pay their addresses to the King and the last to be admitted to any ceremonial function. Is that what you wish for your daughter, my lord? To be last?”

“I thought not,” Susan agreed. “And that is where my services are most appreciated. I will steer your daughter away from the Irish Duke. I will keep her safe from his attentions.” She didn’t add that there were only two Irish dukes in the world and both safely tucked away in Ireland. Besides, one’s title had been attainted for plotting rebellion and the other was so old, a wife would have been useless to him.

“Let us also remember how good Miss Rogers was in handling Theresa,” Lady Alberth reminded him.

Susan could see his reluctance and held her breath. The very well respected Lord Alberth was not a man who liked to spend money. But with a commission from him, there was no telling what wealthy doors might open to her. She might finally be able to afford a small house on Beech Street and a few other creature comforts—

“Yes, very well,” his lordship said. “Didn’t know about the Irish Duke. I don’t want my daughter last at anything. Besides, I’ve never been fond of the Irish. Keep the fellow and that dratted lad Grover away from my daughter,” he ordered, rising.

“I will, my lord,” Susan said, also coming up to stand. Keeping unwelcome suitors away from precious daughters was all part of her services. “Thank you for your trust in me.”

Lord Alberth grunted a response and left the room. It was left to Lady Alberth to clap her hands, and say happily, “I can’t wait to tell Claire Bollinger that we, too, have hired you. She thought she was so special, but now, we’ll see which daughter marries first.”

She and Susan finished the arrangements. Her fee would be paid at the end of the Season, with a bonus if Lady Theresa married a “suitable” gentleman.

Susan was quite pleased with herself when the butler escorted her to the door, and she went out into the damp February afternoon—until she saw the coach and footman waiting for her.

For a second, Susan was tempted to go the other way, but knew it would be useless. The coat of arms on the door told her it was her sister Ellen this time.

Susan went down the steps and walked to the coach door a footman held open for her. She climbed in, not surprised when her sister launched into her without preamble.

“What were you doing at Lord Alberth’s? Susan, don’t tell me you were peddling yourself to the Earl of Alberth?”

“Fine, I won’t.” Susan reached for the door handle.

Ellen grabbed her arm. They were three years apart, Susan being the oldest. They were both honey blondes who looked enough alike with their gold-brown eyes for people to think them twins, except that the cut of Ellen’s clothes was far more expensive than Susan’s.

“I didn’t mean it that way,” Ellen snapped.

Her brows coming together in consternation, Ellen said, “You must stop this. You mustn’t keep going around amongst people of Dodgin’s set and offering yourself for hire.” Dodgin was her husband, Lord Dodgin. He was some twenty years older than Ellen and a rather strict man. Susan hadn’t realized how strict when she’d arranged Ellen’s marriage to him. She’d feared Ellen would be miserable. Instead, Ellen had turned out to be just like him.

“I have no choice, Ellen. I must support myself.”

“In the country,” Susan objected. “And with the role of playing companion to Dodgin’s eldest sister. No, thank you.”

“I can’t believe you are so ungrateful—”

“I can’t believe you’ve forgotten everything I’ve done for you. I sold everything we had to bring you and Jane to London. I took care of you. Without me, the three of us would still be penniless in Little Hereford.”

“And we do appreciate you,” Ellen assured her. “If I could return the favor, I would. However, Dodgin doesn’t want my spinster sister idling around. You know how he is.”

“I’ve learned. And I’ve learned how Jane and Sir Alec are, too. I refuse to be a charity case in my own family. I value my independence, Ellen, and you’d best warn Dodgin to become accustomed to hearing my name in his circles. This Season will make me a success, especially after I find a husband for Lord Alberth’s daughter, and you’d all best come to peace with it.”

“We’ll do everything we can to stop you,” Ellen answered.

“You may try your best,” Susan responded, and opened the door. She climbed out of the coach, refusing the footman’s hand, and marched down the street, head held high for the first time in years.