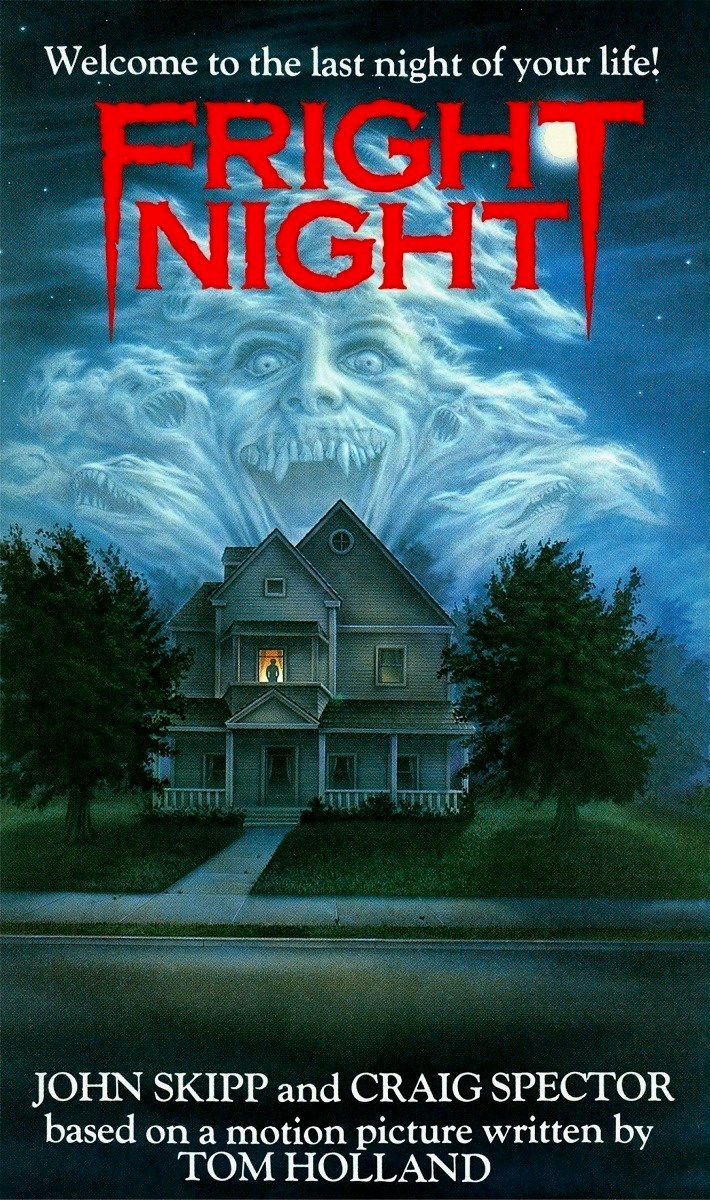 It lives next door to Charley Brewster

Charley has seen the coffin and the bodies drained of blood. He knows he will be the vampire’s next victim. But no one will believe him: not the police, not his girlfriend Amy, not even the school weirdo, Evil Ed. Charley’s last chance is to enlist the help of Peter Vincent, Vampire Killer, star of a hundred horror movies and host of TV’s

Nobody thinks he’s telling the truth—until Evil Ed becomes a vampire and Amy is dragged into his next-door neighbour’s evil, foul-smelling house of death!

Charley popped open the Coke can and swigged heavily. He was locked in mid-swallow when the scream slashed a hole in the night.

Carbonated sugar-water sprayed through the air, spattering the desktop, books and papers with a million wet splotches of brown. He choked; tears flooded his eyes. By the time he recovered, the scream was long gone. It had only lasted a second.

But it was still ringing in his mind’s ear, a single bright bauble of terrified sound, one second of horror that twitched in the air.

Written and Directed by
TOM HOLLAND

C
harley Brewster wasn’t sure where the inspiration behind bra clasps came from. If God were responsible, then clearly he wasn’t meant to fondle Amy’s naked breasts, in which case he should feel guilty as hell. If, on the other hand, the devil were behind it, then God clearly approved of bared-bosom explorations, in which case it was his sacred duty to go about it with all speed.

Charley gave this weighty philosophical question a full second of his undivided attention. Then he went back to struggling, sneakily, with the goddam clasps.
Whoever
was behind it had done an impressive job. Breaking into Amy’s treasure chest was harder than breaking into Evil Ed’s gym locker.

And Amy wasn’t making it any easier. She clearly believed that God had secured her bra tightly around her for a reason. One tiny chunk of his brain could sympathize: she was simply being stronger, and more righteous, than he. The rest of him wished that she would just cut it out, because he wanted Amy Peterson so bad that it hurt.

They were grappling on the floor next to Charley’s bed, a couple of throw pillows cushioning their heads and shoulders. Charley was slightly on top, a half-hearted attempt at the dominant male position. She wouldn’t let him mount her completely. Her hips had ground against his at one point, however—he was
sure
of it—and the one overriding thought in his head was,
If I do this right, I’m gonna make it, gonna make it, gonna . . .

His right hand swept nonchalantly along her naked back. She tensed as it neared those hateful hooks. He veered to the left, moving up to take her shoulder beneath the buttoned blouse.
You’re not fooling anyone, you know,
he could almost hear her thinking.

Throughout it all, they continued to kiss: tongues describing loop-dee-loops, lips nearly spot-welded together. If she didn’t want him to go any further, she also didn’t want him to stop. Her hands were under his shirt as well, and he noticed that they’d hit
his
nipples a couple of times without being struck by lightning.

Dammit, this is stupid,
he silently muttered. Then Amy did something particularly nice with her mouth, and he lost himself in the kiss for a minute.

Self-consciousness returned with the soundtrack music. Spooky strings—foreboding, swelling—in accompaniment to the stilted dialogue from the three-inch speaker of his portable TV:

“Yes, Jonathan.” Young, female, also British, with the cool and cheesy theatrical creepiness of the living dead,
circa
1945. “It’s so marvelous to see you again.”

“Yes?” A short pause. Then, wickedly, “Would you like to kiss them?”

The music reared its corny head, melodramatically mounting in intensity.
Jesus,
Charley thought, lips still grinding on Amy’s. The movie made him feel suddenly ridiculous, his clownish insecurities blown up to the size of floats in the Macy’s Thanksgiving Day Parade.
They probably aren’t even opening their mouths,
he added sourly.
It’s stuff like this that makes us so hung up.

He steeled himself for a moment, then decided to go for broke.

Amy wriggled beneath him as he went for her bra clasp with both hands. Her hands grabbed him just below the armpits and tried to push him away. He held on tenaciously, arms wrapped around her, desperately wrenching at the miserable elastic. The hooks held tight. He began to suspect that she’d glued them closed. She was beating on his back now. There was no time to lose. Charley made one frantic last-ditch effort, and—

“STOP, O CREATURE OF THE NIGHT!”

The voice was deep and commanding. It was also coming from the TV set. Charley responded to it anyway, freezing just long enough for Amy to successfully push him away.

On the screen, the vampire hissed.

“God damn it,” Charley moaned, and his gaze flickered over to the screen. The beautiful vampire woman was backing away from Peter Vincent, teeth bared. The fearless vampire hunter advanced, a wooden stake in one hand and a prodigious mallet in the other.

Peter Vincent was tall and foreboding, his gaunt features taut beneath his stovepipe hat. Everything about him was dire and sober, from his black suit and cape to the smoldering darkness of his eyes.

Amy Peterson, on the other hand, was cute and cuddly. She had a wholesome face and a wanton body; they mirrored the conflict in her soul. When she looked at him, bright-eyed and cheerleader-pretty, he was struck with the full brunt of teenage love and adulation; when she touched him, every nerve in his body screamed with lust.

She refused to look at him, so Charley turned back to the movie. The music was really howling now, and the vampire shrieked as the stake pounded home. There was a little blood at the corners of her mouth, and her eyes were wild.

“I’m sorry,” Amy said from behind him.

“Yeah,” Charley mumbled, his eyes pasted to the screen.

“Yeah, I know. I bet.” He knew he was being pissy. There was something perversely satisfying about it. A minute ago, he’d been physically pleading with her. If she had to crawl a little now, well . . . that might just bweak his widdow heart.

“You can’t help it,” Charley echoed sarcastically. He thumped his fist against the shag carpet for effect, then leapt to his feet and started pacing around the room. “Well, what am I supposed to do about it? I can’t help it, either! We’ve been going together for almost a year—”

“Well, almost
half
a year, then—” he stormed on, inconsolable “—and all I ever hear is ‘Charley, stop it’ and ‘I’m sorry!’ It’s making me crazy. It really is.”

He’d never yelled at her like that before, and it made him a little uncomfortable. He stopped in front of the window and looked from Amy to the screen.

The words
Fright Night
appeared in big dripping letters, the Channel 13 logo below it. Then a Carvel Ice Cream commercial came on, and Charley turned to face his ghostly windowpane reflection.

While the gravelly voice droned on about Cookie Puss, Charley appraised himself.
Yeah, you’re a real Cookie Puss, all right,
he thought bitterly.
You’re as plain as a bag of potatoes.

In truth, Charley Brewster was not a bad-looking guy. He wasn’t exactly rugged, but there was nothing cutesie about him, either. He was just a solid, decent-looking kid: brown hair, brown eyes, a prominent Roman nose, full lips and symmetrical ears on a pleasant, rounded face. Nothing special, but nothing to kick out of bed.

When the commercial switched to an ad for the Rancho Corvallis Dragway (the Woody Woodpecker voice howling, “SATURDAY! SATURDAY!”), Amy snuck up behind him and snaked her arms around his neck.