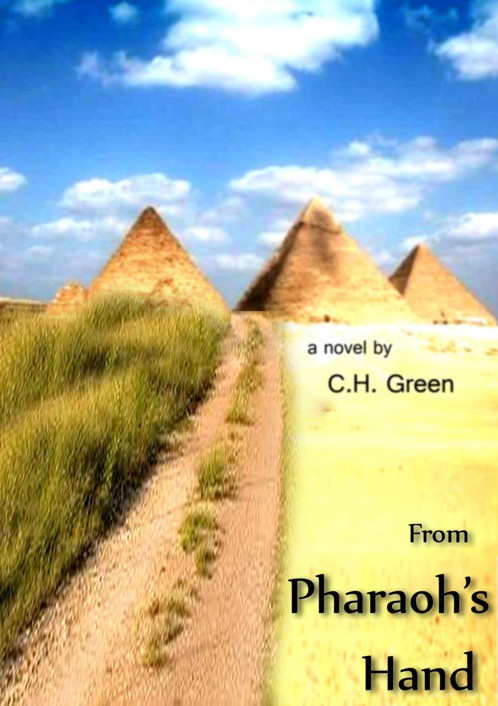 Dedicated to my wonderful son who helped me brainstorm, who is and always will be the sunshine of  my life.

"Thou shalt not kill."

It was well after midnight when the SUV pulled back into the back parking lot of a boarded up motel and cut its lights.  The mission had been a success.  Frankie had promised to pay Catfish extra if he would help with this one heist.  All Catfish would have to do was watch out for the security guard making his rounds.  It was even better and easier than he thought it would be.  And what a haul they had made.

“Look at all this gold, would you.  Man, must be a fortune here.  What do ya suppose this is, Bones?” Frankie asked Catfish as he pulled a heavy odd shaped item resembling a crocodile from the pillowcase.

“Probably one of them idols that heathen worship.  Is it heavy?  I bet it’s solid gold.”

“
Yeah, man.  It’s heavy.  Here, hold it and see.  And look here in this fancy box all       trimmed in gold.  Ain’t it cool, man?  There’s rings.  Five of ‘em.  All of them solid too, I bet ya.  Look here at this plate with the funny writing.  Oh here’s the translation down at the bottom: ‘Death to all who enter Pharaoh’s tomb.’” His eyes widened in mock horror.  “whoa, scary stuff.  Good thing I ain’t superstitious.  I sho ain’t.  These babies going ta change my luck forever.”  And he whistled a low whistle of admiration.

“Well, now Frankie, helping you pull off this here elaborate job, it bein’ so risky an’ all, well I figure a special reward on top o’ my standard rate.  Whadda ya say?”

“What exactly did you have in mind?  You know I don’t get paid on the goods ‘til they delivered to Ace.”

“Well, what Ace don’t know won’t hurt him.  How about one of them there gold rings plus my five grand.”

“Whadda ya mean… I could have been shot to death back there!”

“Wouldn’t be no big loss.   Besides, what’s a stupid redneck like you gonna do with a gold ring? You low-class white trash moocher,” said Frankie, throwing his head back for a big belly laugh.  The laughter ended, though, when the idol came crashing down against his bare head.

The idol came down on Frankie’s skull three times more.  The second blow had already rendered him unconscious, but Catfish was so infuriated at Frankie’s attempt to cheat him out of payment that he just kept striking.  Blood poured from Frankie’s head.  Who was this low belly calling a redneck?  Bones had risked his life, just like Frankie.

Cat labored to breathe when he finally stopped to survey the damage to Frankie.  Once again his temper had won.  If he had just been patient.  If he had just let Frankie have his laugh, he could have convinced him that he deserved the reward.  But Frankie was gone now.  There was no sign of life.  Catfish held the bloody idol in his hand and wondered what in tarnation he was going to do next.

The river.  The river was his answer.  It was not that far away.  He could drive Frankie’s SUV to the river, put it in gear, and let it sink to the bottom of the muddy Mississippi.  Frankie would never be heard from again.  Catfish regretted that the golden idol would have to go too.  It had his fingerprints all over it, not to mention all that blood
.  One couldn’t be too careful these days, what with all them fancy pants scientists and their DNA.

“Cryin’ shame.  Bet that was worth a pretty penny, ” he said aloud.

But at least he had the rings and the fancy box.

Catfish got out on the passenger side, checked to make sure they were safe from view, and pulled Frankie’s lifeless body over to the passenger side.  What a mess.
Frankie, my man, you should never try to con a country boy
.  He fumbled around in the Frankie’s vest pocket and found his wallet
.  Serves you right.   Now I get my five grand plus what you got left, not to mention these here golden trinkets.
He stuffed the wad of bills down in his pants pocket and started the SUV.  Good thing the river wasn’t far.  He would have to walk back to the truck.  And walking around this part of the city this time of night gave him the creeps.  No telling what danger lurked around the alleyways and tall dark buildings.  There just was no telling.

Everything had gone as well as expected, she reckoned. She hadn’t been missed yet. No one was the wiser. Elizabeth had swapped the gym clothes in her backpack for the clothes and money she had stashed in her car. She had worked her regular four hours and then hopped the casino shuttle at the end of Wal-Mart parking lot around 7 p.m. Piece of cake. Throwing back the covers, she sat up in bed too fast and the room swam. She decided it might be best to just sit still for a few moments for it to pass, and as she did so, reflected on the long night that had just passed.

Two silver haired ladies had passed the time on the bus ride discussing the seafood buffet at the Grand Hotel, and the eighty miles ticked off quickly as they passed by the Brownsville and Somerville exits. Billboard after billboard promoted the loosest slots in Tunica or the stage shows at the Horseshoe, the litany of casino advertisements being broken by one that was particularly colorful. “King Tut is back,” It featured a huge golden head of the ancient Pharaoh.  Other than that, there had not been much to see en route to Memphis on I-40, except the occasional State Trooper or stalled vehicle by the side of the road.

Elizabeth had told the driver she was sick and needed a rest area once they reached the outskirts of town, but just as she had mustered the courage to begin her scene, a gentleman near the front had spoken up.

“
I believe my lady friend here would like to shop a bit before we proceed to drop our nest egg down the slots.  Anyone else feel like stretching their legs?”

“
Hey, that’s a good idea. I hear that new Wolfchase mall has an ice cream parlor.”

“
Don’t matter to me none,” said the driver.  “I get paid the same either way, buddy.

“
Well you just passed the exit,” muttered another near the front of the shuttle.

Elizabeth had ditched the party at the Shell station. It was no big deal. Finding her way around Memphis--that was going to be the big deal.  She wished she had taken the time to print out directions.

She had been shopping in Memphis many times with her parents. She had seen most of the landmarks like Graceland, Sun Records, and Beale Street, and she had gone to sporting events at the dazzling replica of the Pyramid. She had been on field trips to the Pink Palace museum and the Memphis Zoo. But her parents had always driven while she slept in the backseat, or she was busy chatting with friends on the bus. She was fairly clueless about how to get anywhere in a city this size. It was a good thing she had purchased a map of Memphis back at the convenience store. That and a Diet Dr. Pepper.

Her first priority had been to find a hotel for the night, but she needed a phone book. How sick and anxious she had been, as she had waited in line behind a well-dressed, clean-cut black man of about fifty sporting a huge diamond ring and new leather loafers. Behind him was a not-so-well-dressed, thin white man with a scraggly beard and holes in his faded grungy jeans.  He appeared to be in his forties, though with all the facial hair, Beth wasn’t real sure.  They had bought Marlboros and Miller Lite and seemed to know each other.  Elizabeth remembered how she had through a Hollywood tabloid near the counter trying to hide the fact that she was eavesdropping.

“You wanna follow me so you’ll know where you’re going?” the black man asked.

“Now how’m I gonna lose that big old rattletrap you drive. Man, ain’t it time for some new wheels?”

“I’m workin on it. A couple more jobs ought to get me into a Navigator.”

“Yeah, man. Then you be stylin and profilin and all yo buddies be wondering where you get the jack to afford all that.”

The dirty white man’s grin revealed several crooked, yellowed teeth with a large gap in the bottom. Beth remembered recoiling in disgust at the smell of stale smoke, body odor, and garlic.  The man’s nicotine-stained fingers fidgeted with a ring of keys as he spoke.

“
Don’t you worry ‘bout that. I’ll keep Old Faithful for ‘round town and drive the Navigator when I make my trips into the city. Gonna finally get me a decent roof over my head too.”

Track buddies
?  Maybe. Southland Greyhound park was just west of Memphis across the river bridge. She had known that much. She guessed the dirty white man had won a couple of thousand and was dreaming to hit it big on his next gambling excursion.
He probably has a wife and six children at home,
she remembered thinking to herself as the two men headed out the door. She had stood there for a moment and watched as the man called Bones went to the back of his rusted out, two-toned, black and red GMC, placed the beer inside, then hoisted what appeared to be a 100 lb. bag of feed onto his shoulder.  The black man opened the back door of his SUV, and the bag was thrown inside. The two shook hands, looked around, and then looked directly toward her. She looked both ways and pretended she was looking for a cab or someone to pick her up, and then took the phone book back to the booth and slid onto the cracked red seat to plot her course.