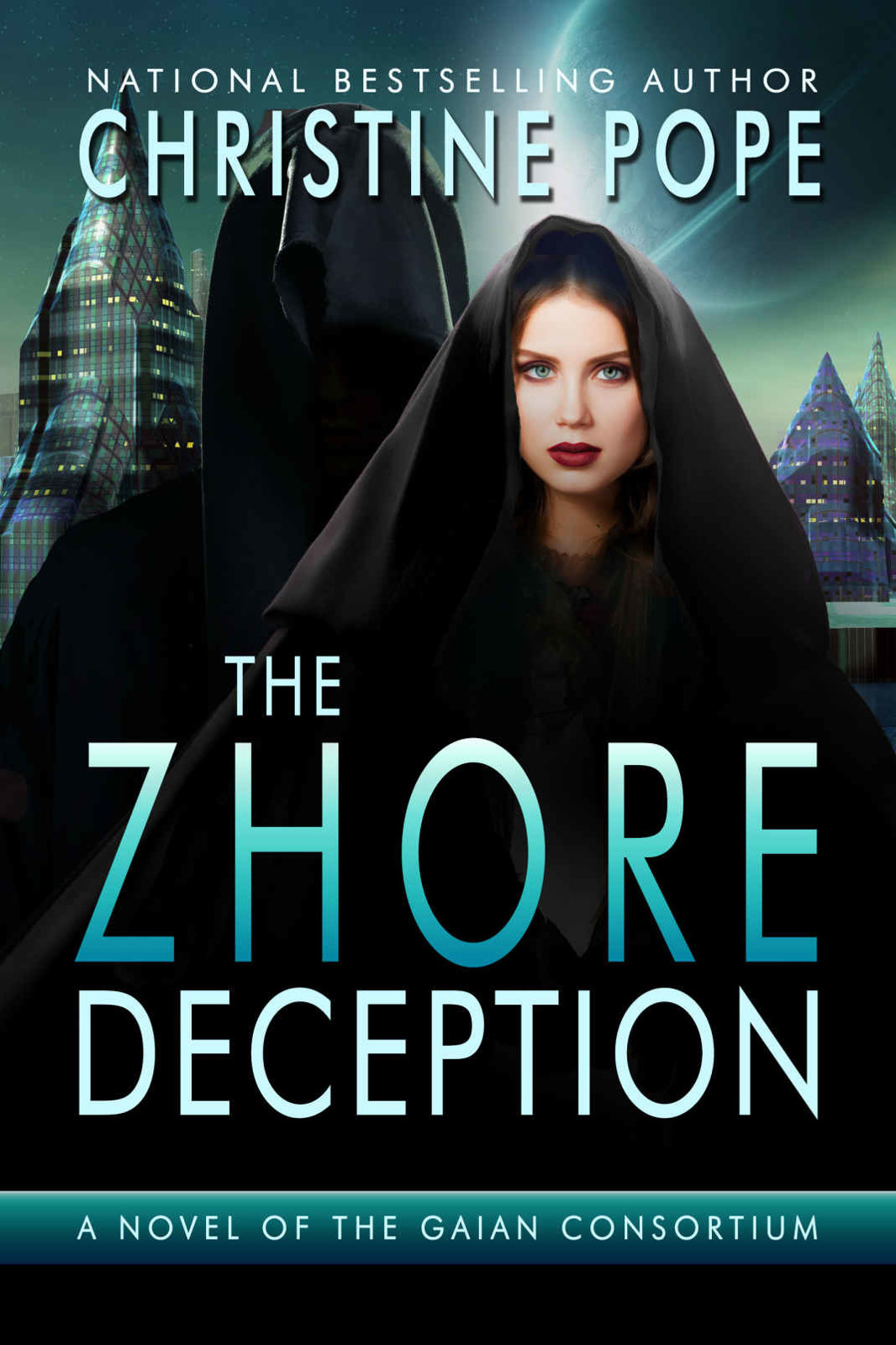 A NOVEL OF THE GAIAN CONSORTIUM

This is a work of fiction. Names, characters, places, and incidents are either the product of the author’s imagination or are used fictitiously. Any resemblance to actual events, places, organizations, or persons, whether living or dead, is entirely coincidental.

All rights reserved. No part of this book may be reproduced in any form or by any electronic or mechanical means, including information storage and retrieval systems — except in the case of brief quotations embodied in critical articles or reviews — without permission in writing from its publisher, Dark Valentine Press.

Please contact the author through the form on her website at
www.christinepope.com
if you experience any formatting or readability issues with this book.

Trinity Knox sat in a sterile chamber precisely ten feet square. The only furniture the room contained was a plain steel table and two steel-framed chairs with mesh seats. She tried to sit as quietly as possible while she waited in one of those chairs, eyeing the empty one across the table from her with mounting dread. Sooner or later someone would come in and take that empty seat, and that, she knew, was when the real fun would begin.

There was no sign of any surveillance devices, which of course meant nothing. The designers of a facility like this one would have made damn sure that every bit of tech was carefully hidden. However, the smooth, uninterrupted gray-beige surfaces of the walls and ceiling didn’t mean that every movement, every breath she took wasn’t being recorded.

So she sat quietly, hands folded on the table in front of her, and stared into what she hoped looked like the middle distance. Not that there was much of a middle distance in a room as small as this one. However, schooling her features to a careful blankness helped a little to hold back the panic within her, the small frightened beast inside her ribcage that threatened to burst out and show her captors how truly terrified she was.

She’d really screwed up this time.

How could she have been so stupid as to confide in Caleb Prescott, of all people?

Because she’d thought she was in love with him. And he’d told her that he loved her. That was her first mistake, she supposed. Caleb was one of the rare few she couldn’t read. His thoughts were opaque to her. And she’d appreciated that quality, because it meant there was an aura of mystery around him. She’d never catch him thinking that her ass was too big or her nose too long, or any one of a myriad of faults that a man might comment on during any given day. No, Caleb had said she was beautiful, and he loved her, and then, one night after making love, she’d confessed her big secret.

“I can read minds,” she’d told him, and his eyes had widened in the darkness.

A flash of his teeth. He did have very white teeth. “So what am I thinking right now?”

That had been awkward. She’d had to explain that there was one person in a thousand — maybe one person in ten thousand — whose thoughts were invisible to this strange talent of hers. And he’d looked skeptical…of course he had…until the next day at work she proved she wasn’t exaggerating to him, by reciting word for word what their supervisor had said to Caleb at a closed-door meeting regarding the latest security upgrades to their computer systems.

Caleb hadn’t doubted her after that. No, he was very enthusiastic about her “amazing talent.” Problem was, it didn’t take long before he was scheming, thinking of ways he could use that talent to benefit himself. Of course, he was smart enough not to put it that way. He talked a lot about how the corporation was corrupt, and how it would never miss a few measly million units. Then he’d gone on to explain how they could be away and off-world before anyone could figure out what had happened, and living a life of luxury on Eridani or some other planet that didn’t have an extradition agreement with the Consortium. After all, Trinity would be stealing the passwords right out of their supervisor’s own mind. How could anyone ever detect that kind of intrusion, since there would be absolutely no hacking involved?

Trinity had known it was wrong. She’d resisted for a while. But she was so desperate to believe Caleb — to believe in his love for her — that eventually she’d given in. It was victimless crime, wasn’t it? Maybe their supervisor, Lisanna Cruz, would get her hands slapped for funds disappearing from her department without a trace, but because she was in fact innocent, there wouldn’t be anything that the authorities could actually pin on her. Besides, Trinity could desperately use some of that money herself. When her mother had died halfway across the country, she’d left a mountain of debt as her sole legacy, and Trinity was doing the best she could to pay it off with the tiny amount she had left after covering her expenses each month. Half a million units could do a lot to erase that debt.

The problem was, once the funds were in his hands, Caleb promptly disappeared. Yes, he had planned to go off-world…without Trinity. There was a whole galaxy full of interesting women waiting for him, so why would he want to saddle himself with dead weight like her?

And how kind of him to drop a little note to the local authorities explaining exactly how she’d done it.

When she’d first been arrested and locked up in a cell at the main jail facility in Barstow, she’d cried tears of fear, of anger, of self-recrimination. What an idiot she’d been. She should have known better than to trust Caleb. Didn’t she have the example of her own mother to show her that placing your trust in a man was the quickest way to a broken heart and an empty bank account, or worse? And yet Acantha Knox had gone from partner to partner, always thinking the next relationship would be “the one.” Right until the end, when she’d been murdered for her vehicle and the contents of her wallet, and not a whole hell of a lot else. There hadn’t been anything left.

Now, though, as Trinity waited in this room that frightened her because of its cold functionality, she didn’t weep. Dry-eyed, she stared at that fixed point in the middle distance, the one she’d chosen because she hoped it would make her look untroubled by her current predicament. What else could she do?

This wasn’t a police station, or a holding tank for low-level criminals. No, she would have bet her cut of the take she never received that this was some kind of government facility. Everything was just a little too clean, a little too polished. The guards who’d escorted her to this room had worn no insignia, not one badge or patch to show who they worked for. And that frightened her more than anything else. People were brought to places like this so they could disappear.

She swallowed, then couldn’t avoid startling as the door hissed open, sliding into a cavity hidden inside the wall. A man in his early thirties, some ten years older than she, entered the room. He wore a dark gray suit and had eyes almost the same gray, piercing against his tanned skin.

Some women would have probably found him handsome, but Trinity reflected that she was done with handsome men. They just weren’t worth the trouble.