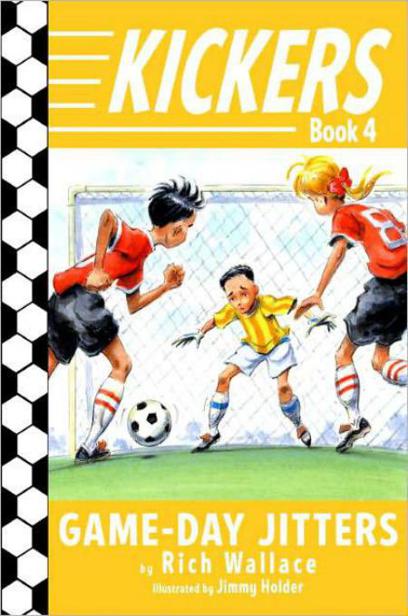 By Rich Wallace for younger readers:

CHAPTER ONE
A Painful Memory

Ben was reading at his desk when a wad of paper hit him in the chin. The paper fell to the floor and Ben turned to glare at his classmate Loop.

Loop was laughing. He mouthed the word “goal” at Ben and looked away.

Ben reached out with his foot and snagged the paper, sweeping it toward him. He glanced at the front of the room, but the teacher hadn’t
noticed anything. They were supposed to be reading silently for ten minutes.

Ben picked up the paper and carefully unfolded it. He could tell that several of the kids nearby were looking at him, but Mrs. Soto seemed unaware.

He flattened the paper out on his desk and read it.

Ben looked over at Loop and shook his head. “No way,” he mouthed.

Loop patted his chest twice and smirked. Then he nodded. He was confident and he had a right to be. The Falcons were by far the hottest soccer team in the Kickers League.

But the Bobcats—Ben’s team—were pretty hot, too. They’d won four out of their last five games and qualified for the play-offs. On Thursday afternoon, they’d be facing the Falcons in the semifinals. The winner of that match would play in the championship game on Saturday.

Ben winced as he thought about the first game between the Bobcats and the Falcons. That had been several weeks ago. At that
point in the season, the Falcons hadn’t won a single game. But things started to click for them against the Bobcats, and the game turned into a rout. Loop and his teammate Alex did all the scoring in a 3–0 shutout.

The memory of that game had stayed with Ben ever since. He and Loop were friendly rivals in most sports and games. Loop definitely had the upper hand lately.

The Falcons had won all of their games since then, usually by big margins. Most of the players in the league thought the Falcons would end up as the champions.

Not me
, Ben thought.
Their season ends tomorrow
.

“All right, class,” said Mrs. Soto, standing at her desk. “Get ready for recess.”

“Yes!” said Loop, who was always ready to play.

Ben didn’t say anything, but he was relieved
to be getting a break. He was a good student, but sitting still all morning made him fidgety. He couldn’t wait to get outside.

Loop caught up to Ben as they walked along the hallway. “What do you think of my predictions?” he asked.

Ben rolled his eyes. “I agree that the Rabbits will probably beat the Panthers,” he said. “But you’re dreaming if you think you guys will shut us out again.”

“We’ll see who’s dreaming tomorrow,” Loop replied. “We’ve scored twenty-four goals over the past six games, and we’ve only given up three. How does your team compare?”

Ben did some quick addition in his head as they stepped onto the playground. In six games, the Bobcats had scored ten goals and given up nine. But if you didn’t count the loss to the Falcons, the past five weeks looked pretty good.

“We never score a lot of goals,” Ben said, “but we score enough to win. And we’re a
lot
better than the last time we played you.”

The other fourth-grade classes were already on the playground. Loop jogged over to the four-square courts. One of the players tossed him a ball and Loop juggled it with his thighs, bouncing it back and forth like a soccer ball.

Ben sat on the edge of a seesaw, straddling the green board and watching Loop.

Loop turned to Ben and waved his hand toward the court. “You playing?”

Ben shook his head. “Not today.”

Loop smiled. “It won’t help. We’ll thrash you tomorrow no matter how much energy you have.”

You wait
, Ben thought. He knew that the Bobcats had made a huge improvement over
the past few games. But he also knew how good Loop’s team was. They were fast and skilled, and they played a smart style of soccer. Beating them would be incredibly hard.

Ben jumped a little as the seesaw shook. He glanced over his shoulder and saw his best friend and teammate Erin pushing the other end.

Ben stood carefully so the seesaw wouldn’t rise up and smack him. “Thinking about tomorrow,” he said.

“The big game,” Erin said cheerfully. She was an excellent soccer player, but she never seemed to take the games as seriously as Ben did. He knew that he sometimes took the games
too
seriously, and that had caused some trouble. He’d been kicked out of one game and suspended for another. He’d worked hard on controlling his temper since then.

“I heard Loop bragging again,” Erin said with a laugh.

“He was mouthing off about the game,” Ben said. “Thinks they’re going to beat us, like, a hundred to nothing.”

“He’s just trying to throw off your concentration,” Erin said. “Don’t let him get to you.”

“He won’t.” Ben took the crumpled-up paper out of his pocket and showed it to Erin. “He’ll eat this tomorrow after we beat them.”

Erin looked at the paper. “Six–nothing?” she said.

“That’s what he wrote. Come on, I need to burn off some steam. Let’s shoot baskets.”

They walked across the playground and Ben picked up a basketball. He dribbled a few times, then charged toward the basket and made a layup. He didn’t really need to save
energy—he just didn’t want to listen to Loop any longer. Ben
never
ran out of energy.

Erin swiped out her hand and stole the ball. “Nah,” she said as she darted away. “Let’s play HORSE.”

Ben frowned but said, “Okay.” He’d rather compete in a real game, but HORSE would do for now. “Go ahead.”

Erin dribbled to the free-throw line, took one step back, and shot a jumper. The ball banked off the backboard and into the hoop.

Erin shrugged. “Bank or not, you still have to make the shot.”

Ben eyed the basket, then jumped and shot. The ball rolled around the rim but fell out.

Erin did a simple layup from the right, and Ben matched it. She missed her next shot, and Ben made one.

By the time recess ended, both of them had reached H-O-R-S.

“Fair enough,” Erin replied. “But I get the first shot.”

Ben wiped his forehead with his hand. He’d broken a sweat, which was always a good thing as far as he was concerned. He felt good now, ready for the rest of the school day. He couldn’t even remember why he’d been so keyed up before recess.