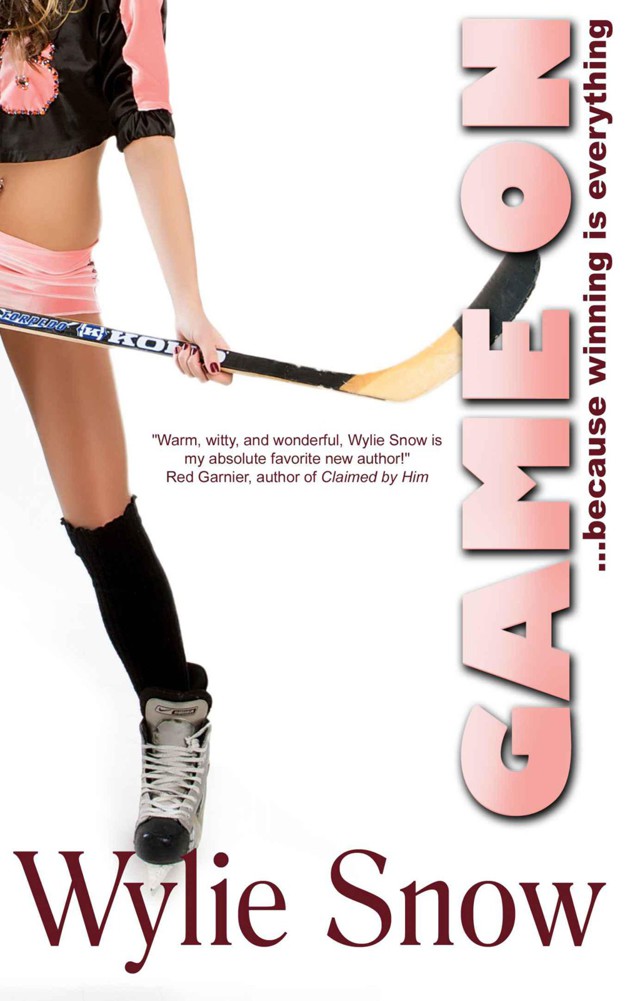 Game On by Wylie Snow

This eBook is licensed for the personal enjoyment of the original purchaser only. This eBook may not be resold or given away to other people. If you would like to share this book with another person, please purchase an additional copy for each recipient. If you are reading this eBook and did not purchase it, or it was not purchased for your use only, then please return to Amazon.com and purchase your own copy. Thank you for respecting the hard work of this author.

C
lara blew her nose into
a dampened, shredded tissue, her twelfth since taking off from Heathrow. She knew this because it was the last one in the travel-sized pack.
Bugger.
How could a mere dozen single-ply squares get a hysterical woman across an entire ocean?

“I’ve blown through the last of them, Lyds,” she said. “And we’re barely over Bermuda.”

Lydia pushed her satin eye mask onto her forehead with an impatient huff and plucked the soggy wad from Clara’s fist, replacing it with a fresh square from her own packet.

“Thanks,” Clara sniffed as Lydia reset her sleeping mask. She waited a beat before adding, “You know, as my best friend, you’re supposed to at least pretend you’re sad.”

Lydia once more extracted a long, pale limb from the ridiculously small airline blanket to slide the mask up. How she did that without smudging her mascara was a mystery.

“I’m sorry, darling,” Lydia said in her crisp London accent. “I know he was your partner, though I use that term loosely, and I
am
trying to be supportive,
really
, but he was perpetually grumpy and hardly personable. He snarled at me like I was yesterday’s whore no matter how many treats I slipped him.”

Clara felt a bit of a pretender herself, using Biscuit’s death as a convenient cover to shed the tears of tension that had been building up since her life topsy-turvied. Or maybe it was simply the final straw. The proverbial
they
say bad things come in threes; therefore, Clara was done. First had been her accident, second was the sale of the newspaper, though the ramifications of that were still pending, and third was Biscuit’s demise. Nothing else could possibly go wrong. “He wasn’t grumpy. He just looked that way because of his severe under-bite.”

“Oh, all right,” Clara shrugged. “I concede. He was a tiny bit grumpy, but only on the days he was stuck in the office. When we travelled, he was fine, completely in his element. And as for his snarling, all I can say is that he knew a bribe when he saw it. He could sense your indifference, that’s why he didn’t come running every time you snapped your come-hither fingers.”

“Yes, well, I’m as shocked as you are by his untimely demise, but he’s just not worth runny eye makeup.”

“Don’t be so such a hard-arse, Lyds,” Clara scolded. “You know I’m completely lost without him. My career is over. I depended on him. And I can’t keep hiding my problem from Charlie now that—”

“Speak of the devil and here he comes,” Lydia warned.

Clara looked up from her mid-row seat to see her rotund boss at EuroNow toddling down the narrow aisle of the aircraft. His ruddy face sported the same adolescent smile most men wore around Lydia. Oh, to have that kind of power over the male species.

“Good of him to venture into the slums of economy class to check on his serfs,” Lydia said under her breath.

Clara smirked behind her tissue. Charlie wasn’t a bad sort, but his sense of self-worth was highly overrated. And he had a crush on Lydia that was embarrassingly obvious to everyone on the staff of the newspaper, including his wife.

He rested a pudgy arm on the back of Lydia’s aisle seat—she always scored the aisle because of her endless legs—and leaned forward until he was practically on top of her.

“All right, Clara? Still upset about your dead Biscuit?” Along with his style of over-enunciating every syllable, as though speaking to thick-headed toddlers, he added an annoying sympathetic whine.

“You’ve got to pull yourself together, Clara,” he urged and patted her head, much like he used to do to Biscuit. Charlie had two modes when dealing with women: adulation and mothering. Lydia got the peeks down her cleavage while Clara got the clucking.

“I know it’s hard, love,” he continued. “But we can’t have you meet our new management in the state you’re in. There are exciting plans in the works, so come on, wipe your tears and put on your big-girl knickers.”

“
That
was unnecessary, Charlie,” Lydia said.

“Of course, Lydia,” Charlie said, his eyes downcast, duly reprimanded. “But Clara, he was just a dog. We’ll get you a new Biscuit.”

“That’s quite enough, Charlie.” She pulled Clara tighter. “Go back to your first class cabin and eat your peanuts.”

Clara didn’t have to see Lydia’s face to know her eyes were rolling.

“Thanks for checking on me, Charlie,” Clara said, pulling back from her friend’s embrace. She was grateful for his attempts to make her feel better, but more grateful to Lydia for running interference. She could barely face him since the lies began all those months ago.

“I’ll get the stewardess to make you a nice cup of tea, shall I?”

Clara blew her nose into the remnants of the thirteenth tissue as soon as Lydia released her from the supportive-friend death-grip. Charlie was absolutely right. She couldn’t possibly drag her sorrowful self into the Bartel Media’s head office with a puffy face and runny mascara. That wasn’t the impression one wanted to give if one wanted to keep her job and travel-happy lifestyle intact.

No, she absolutely had to pull herself together. She’d worked too hard making a name for herself as one of the leading and most trusted restaurant critics in Western Europe. It had taken years, but she’d finally built up reputation and respect enough to make or break a restaurant with a mere mention in her regular Sunday column, “Biscuit and Bean.”

How on earth was she going to manage to hang on to her column once the big American media conglomerate took over? Within the month, she’d be expected to turn in new material. Within the month, her fraud would likely be discovered.

When the buyout had been announced, smug Charlie—the only one who’d been guaranteed his job as editor-in-chief—tried to reassure the staff, had promised to fight for every position, but he could only do so much to alleviate the level of anxiety that had clouded their generally happy work space. Speculation as to
why
Bartel Media Group wanted a piece of the European market had ruined karaoke night four weeks running. EuroNow was the hottest independent newspaper on the stands. Would they be stripped of their unique style, their unbiased reporting on news, culture, and fashion, and be turned into another over-regulated rag? And would
they,
the largest North American media conglomerate, keep the staff, the format, everything that made their daily hip and exciting? So whilst the group should have been annihilating old Spice Girls tunes and Beatles medleys between pints, they were instead contemplating where they would send their curricula vitae.

Clara’s concerns were more selfish. She had to fix her situation—thought she could, in the beginning—but with each passing week without a change in her condition, her confidence diminished and her anxiety grew.

She’d do anything to keep the job she loved, but how long could she preserve the status quo with lies? How long could she crush her moral code into silence before it crushed her? Certainly not long, especially without her crutch, Biscuit.

“What am I going to do, Lyds?” Clara said, disliking the desperation in her voice, but the situation was dire. “I can’t do it alone.”

“You’ll bluff, just like the rest of us do on a day-to-day basis.”

“I can’t bluff something like this, Lyds. It’s too big. It’s like asking a deaf man to critique music.”

“I’m not! What if you were suddenly rendered color blind? Could you write a commentary on Burberry’s fall collection if you couldn’t tell the difference between burgundy and russet?”

“I suppose you have a point.”

“So you see, I’m not being dramatic, I’m being realistic. I can bluff for a while, perhaps, but my work will suffer for it. They’ll find out eventually.” Clara lifted her elbows a few inches off the armrests. “By the way, do I smell?”

“No, you’re good. And darling, stop worrying or you’ll get those unattractive forehead creases. You will figure it out. You always do. You’re the smart one, remember?” Lydia squeezed Clara’s hand affectionately. It was a long-running gag between them, that Clara was the intelligent, resourceful, fix-everything gal while Lydia rode through life on her looks—a joke because Lydia aptly hid her razor sharpness behind her beauty.

Clara palmed her cool, clammy cheeks before wiping her sore eyes a final time. She pushed her fingers through her unstyled hair and took a deep breath in an effort to calm herself. “Charlie’s right about one thing, Lyds. I can’t show up in America looking like this.”

“Now you’re giving me a problem I can solve,” her friend said, tugging the giraffe-print makeup case out from under the seat in front of her. “You need a mile-high makeover.”

“Impossible. I can’t go.” Luc clenched his jaw and resumed pacing in front of the four sixty-inch plasma screens gracing the east wall of his media room. His knee ached on every pivot, but he kept walking to limber up the muscles around the titanium and ceramic joint. There were no windows in his cave but he’d bet his Olympic gold medal a storm was coming.

“You have to,” Sutter countered. “Bartel specifically requested your presence, and we all know that ‘request’ is his polite way of saying ‘be there or else.’ ”

Sacre bleu!
In his current mood, the last thing he wanted to do was stand on Bartel’s rooftop patio, drinking fluorescent cocktails. Luc rubbed the back of his neck. Riley Sutter, vice president of all things sports at BMG
and
the closest thing to a best friend he had, knew he loathed public events. Riley had been with him when the first panic attack hit, when the sweat drenched him and his heart muscle squeezed so tight that he saw black spots.

tales of the latter kingdom 08 - moon dance by pope, christine
What She'd Do for Love by Cindi Myers
The Forgotten: Aten's Last Queen by J. Lynn Else
Too Great a Temptation by Alexandra Benedict
Reapers, Inc. - Brigit's Cross by B.L. Newport
Three Minutes to Midnight by A. J Tata
Overruled by Emma Chase
Witch's Business by Diana Wynne Jones
Stolen (Book One) (An Alpha Billionaire Romance) by Ella London
Heart's Magic by Speer, Flora
Our partner