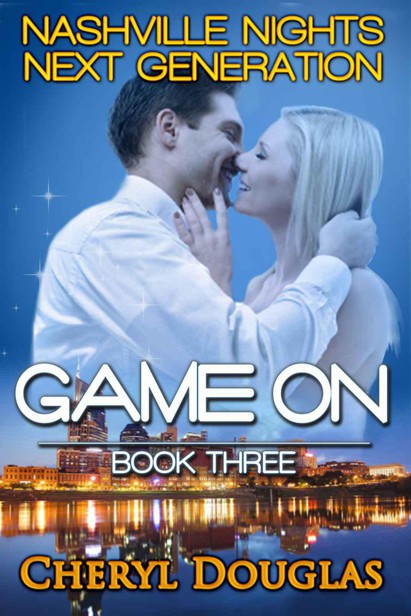 Book Three in the Nashville Nights Next
Generation Series

All rights reserved. No part of this book
may be reproduced, including photocopying, graphic, electronic, mechanical,
taping, recording, sharing, or by any information retrieval system without the
express written permission of the author and / or publisher. Exceptions include
brief quotations embodied in critical articles and reviews.

Persons, places and other entities represented
in this book are deemed to be fictitious. They are not intended to represent
actual places or entities currently or previously in existence or any person
living or dead. This work is the product of the author’s imagination.

Any and all inquiries to the author of this
book should be directed to:
[email protected]

When Brianna Cooper accepts a position with
the legal team at Titan Records, she knows what to expect. She’s been friends
with V.P. of Operations, Ryan Spencer, since they were kids. He’ll try and talk
her into skipping out early and taking long lunches… it’s a good thing she’s
immune to his charm.

Ryan Spencer has earned his reputation as a
ladies man. He loves everything about them, so much so that he’s never been
able to limit himself to just one. But when every guy in the office starts
talking about the gorgeous new lawyer with the killer smile, it makes Ryan
wonder how he can convince Brianna his days of playing the field are over.

Ryan Spencer stared at his spreadsheet,
trying to make sense of the numbers so he could submit his expense report to
accounting, when the source of his distraction walked in without knocking.
Apparently, one of the perks of being his best friend was the freedom to storm
the boss man’s inner sanctuary without warning from his gatekeeper.

“Hey, pretty lady,” Ryan said, grinning at
Brianna Cooper. Ryan grew up with Brianna and her brothers. Her father, Josh,
was one of his old man’s best friends. That meant her family knew his dirty
little secrets, a problem he would have to overcome if he expected to convince
her father and protective older brothers that he was good enough for their little
girl.
Easy,
Ryan told himself.
Just take it one step at a time.

“You’re never gonna believe what just
happened.” She gripped the back of the guest chair in front of his desk,
smiling from ear to ear. She’d had those same dimples since they hung from the
monkey bars in the school playground, but only in recent years had he realized
they were his reward for making her smile.

He and Brianna had grown even closer in the
months since she started working in the legal department at his family’s
company, Titan Records. They would often go out after work for drinks, dinner,
or to the movies. True, the evenings never ended with more than a chaste
goodnight kiss on the cheek, but Ryan had convinced himself it would evolve
into more, eventually. Whoever said patience was a virtue should have said it
was a bitch, because that’s what it felt like to him.

They’d watched half a dozen girly movies that
made her cry while he suppressed the urge to gag. Every time, he just wanted to
reach across the seat and take her hand, to let her know in some small way that
he was ready to take their relationship to the next level, but he always lost
his nerve at the last second and settled for the armrest instead.

She squealed and stomped her stilettos on
the carpeted floor in rapid succession.

He laughed, caught up in her enthusiasm.
Anything that made her this happy was okay by him. “You’ve got my attention.
Just tell me your big news already.”

She took a deep breath and pressed a hand
against her stomach. “I still can’t believe it.”

Ryan rolled his eyes. “Do you think you can
get to the story before it’s time for me to collect my first Social Security
check?”

She stuck her tongue out at him, and his
body responded as though she’d stripped naked and propositioned him. It was
little wonder. He hadn’t gone this long without sex since he lost his virginity
at the tender age of fifteen.

Shortly before Christmas, he came to the
realization that no other woman would ever measure up to Brianna, and he got
tired of trying to fill the void with meaningless sex. He convinced himself she
would appreciate his sacrifice when they were finally a couple.

“Clint Davis just asked me out.”

Ryan barely suppressed the urge to curse a
blue streak. “You can’t be serious.”

“Of course I’m serious. Why do you say it
like that?” she asked, glaring at him. “You don’t think he’d be interested in
me?”

Any man with a pulse would be interested in
her. But Clint-freakin’-Davis? How the hell was he supposed to compete with
that? The up and coming artist just celebrated his first platinum single, and
they were throwing a party in his honor at Jimmy’s bar tonight to celebrate his
achievement. A party Ryan had planned. This must be karma coming back to bite
him for all the women he’d wronged in his past.

“I didn’t mean it like that. I just…” What
could he say? Telling her he was interested in her wasn’t an option. She obviously
still considered him a friend, nothing more, and he knew if he came on too
strong, he ran the risk of losing the best friend he’d ever had.

“You just what?” she asked, tapping her toe
on the patterned carpet. “Expected him to go for someone taller, thinner,
blonder…” She leaned forward, staring him down with the intensity she usually
reserved for the courtroom. “Just say it already, I can take it.”

Her bright green eyes flashed with anger
and he shifted in his seat, knowing he couldn’t escape this conversation
without offending her or revealing more than he intended to. “You’re a
beautiful woman, Bri. But…”

She was so sexy when she challenged him.
That was one of the things he loved most about her. He’d never dated a woman
because he was impressed with her I.Q. In fact, he was ashamed to say he’d never
been drawn to women who were particularly intelligent. But listening to Bri’s
legal jargon was a bigger turn-on than sitting in the V.I.P. lounge at his
buddy’s strip joint.

“I’ve never seen him with anyone like you.
You’re too…”

“Too what, Spencer?” She braced her fists
on his desk and leaned over, revealing the outline of a black lacy bra beneath
the slim black button down shirt. “And I’d tread lightly if I were you. I’m
told these shoes can double as lethal weapons, if need be.”

He tried to hide his smile, to no avail. Despite
the gravity of her threat, he was still tempted to pull her into his lap and
kiss the cherry gloss off her luscious lips. “Isn’t there some law against
threatenin’ your boss with bodily harm?”

“Not when he’s being an ass.” She glared at
him, as though she was daring him to contradict her. “Besides, I’m on a break.
I didn’t come in here to talk to you as my boss. For the next ten minutes
you’re just my friend. Unless you piss me off again, then I’ll demote you to
boss status.”

Ryan chuckled and lowered his head. She may
be going out on a date with Clint Davis tonight, but it wouldn’t take long for
her to realize she would never connect with another man the way she did with
him. “I was gonna say you’re too classy for him.”

She tipped her head back and narrowed her
eyes as though she was trying to gauge his sincerity. “Why do you say that?”

Brianna reached behind his neck to check
the label in the back of his suit, and he felt the brush of her fingers sear
his skin.

“Hey,” he said, grabbing her wrist as their
eyes locked. “I’m not sayin’ there’s anything wrong with appreciatin’ the finer
things. I do, too.”

“Yeah, well I may have a few nice suits,
but I still love a worn pair of blue jeans as much as the next girl.”

And Lord have mercy, he loved to see her in
those worn blue jeans. “I’m just sayin’, Clint’s a nice guy, but…” He shrugged,
wrestling with his conscience. Clint was a nice guy, someone he considered a
friend, but when it came to Brianna, all bets were off. “He’s not like you and
me. He’s country, we’re city. Don’t you think you should look for someone who
gets you?”
Someone like me.

“I tried that, remember?” She sat down in
the chair across from him looking endearingly dejected. “Look how well that
turned out.”

“Don’t mention that loser’s name to me
again.”

Ryan would never forget the night she
showed up on his doorstep, her make-up streaked and eyes swollen, because she
found Jared Ross, her pseudo-boyfriend, in bed with her roommate. Ryan took her
in, made her tea, let her cry on his shoulder and fall asleep in his arms. All
the while, he’d planned to slip out the second she closed her eyes so he could show
that pig what happened when he messed with someone Ryan cared about.

Magicstorm (Heart of a Vampire, Book 4) by Amber Kallyn
Behind The Mask by Rey Mysterio Jr.
Huck: The Remarkable True Story of How One Lost Puppy Taught a Family--and a Whole Town--about Hope and Happy Endings by Janet Elder
Hell or High Water (Gemini Book 3) by Hailey Edwards
Conquered: She Who Dares Book Two by LP Lovell
Backyard Dragons by Lee French
A Merry Little Christmas by Melanie Schuster
Last Train to Paradise by Les Standiford
S.T.A.R. FLIGHT by E.C. Tubb
The Accountant's Story by Roberto Escobar
Our partner