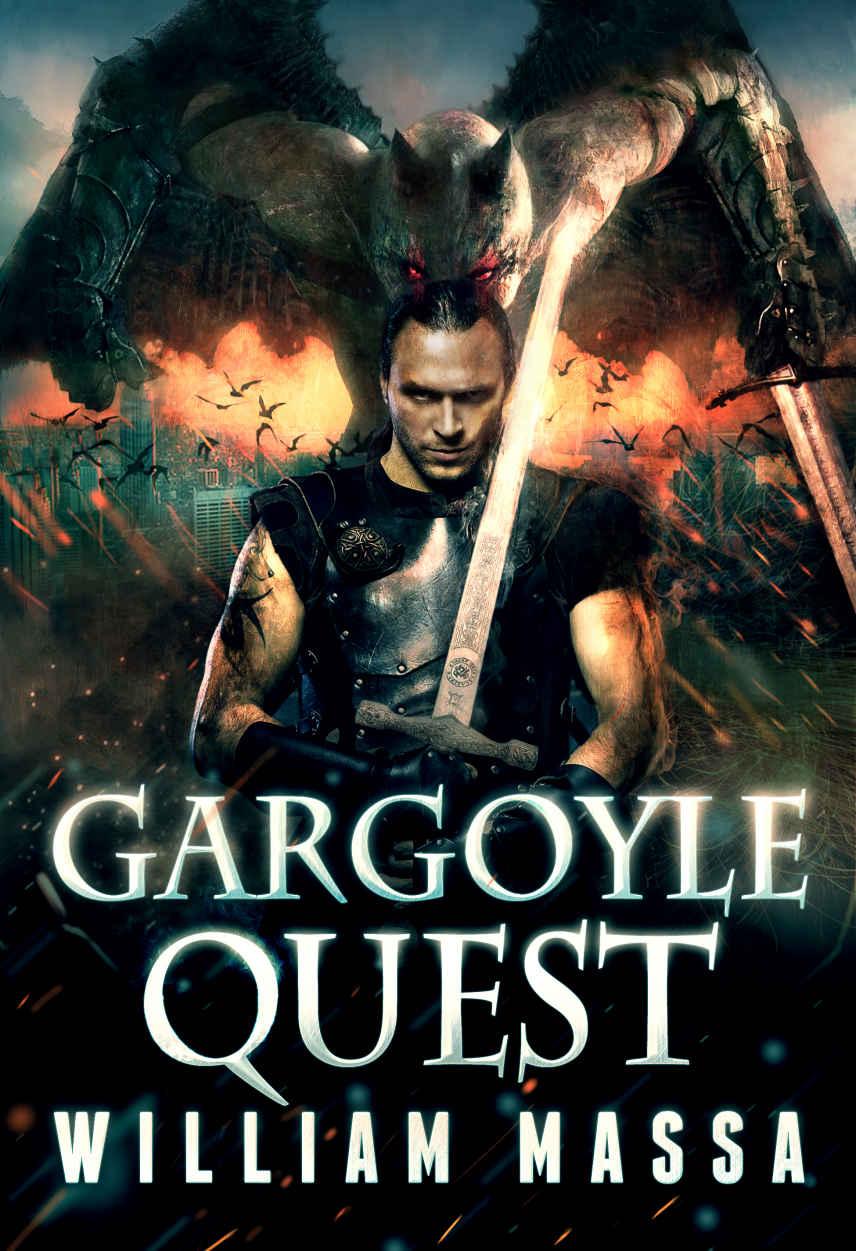 All characters appearing in this work are fictitious. Any resemblance to real persons, living or dead, is purely coincidental. All rights reserved, including the right to reproduce this book or portions thereof in any form.

No part of this book may be reproduced, scanned, or distributed in any form without permission. Please do not participate or encourage piracy of copyrighted material in violation of author’s rights. Thank you for respecting the hard work of the author.

Want to get a FREE NOVELLA?

Not everyone you meet online is who they claim to be.

Sometimes they may not even be alive...

Mark found her photo on a popular dating app. Her name was Akasha, and she was beautiful. Seductive. Irresistible. She wrote that she was looking for friendship. Love. A real connection. But Akasha is concealing a terrifying secret...

Sign up here
.
If you do I will send you a copy of
MATCH: A SUPERNATURAL THRILLE
R
, for FREE.

TONIGHT THE WARLOCK would burn.

A dark joy welled up in the Witchfinder General’s chest as he stood among the villagers in the desolate clearing. Fading sunlight bled across the primordial New England forest, the crimson-tainted twilight approaching fast. Somerset McBride pursed his lips and balled his fists in fearsome anticipation. The need for vengeance smoldered inside the witch hunter with an intensity that matched the flickering torches in the villagers’ hands. Within the coming hour, the terrible fiend that had terrorized the good people of Salem for twelve long months would be meeting his master in hell.

Somerset had devoted his life to hunting down practitioners of the dark arts. Throughout the Colonies, he’d faced horrors most men could not imagine in their wildest dreams, had seen evils not of this world. But they had been nothing compared to the terror he’d encountered within the decaying walls of the warlock’s secluded cabin. The sights and sounds of that fateful night would haunt him for his remaining days, that much was certain.

Reports of a series of mysterious kidnappings had brought him to the small town of Salem. All of the missing women were young, beautiful virgins, snatched from their beds in the dark of night. When he arrived, Somerset was greeted with further chilling accounts of the recently deceased rising from their graves and lumbering through the surrounding forest, ravenous for human flesh.

Most might’ve written off these tales as local superstition, but Somerset knew better. He fought back the horrific images of the skeletal remains he’d stumbled upon in the warlock’s keep. Only years of training, his blessed weapons, and the element of surprise had allowed him to prevail over the devil in human disguise.

The clinking of heavy steel chains pulled Somerset out of his somber musings. The colonial militia brusquely dragged the condemned warlock toward the waiting pyre at the center of the clearing. Even though each man was heavily armed, rapiers and flintlock pistols gleaming in the pale moonlight, their fear was unmistakable. Despite the thick chains, the prisoner in their midst radiated a palpable aura of danger and evil.

Most villagers had imagined the killer to be some grotesque, deformed man-beast, but the reality was quite different. The warlock was tall and well-muscled; he carried himself with the pride and discipline bearing of a seasoned soldier. His features were sharply drawn, with a strong jaw and aquiline nose - he hadn’t needed spell-craft to lure his young victims into his deadly web. By the time they’d realized that the handsome man was a beast borne from their worst nightmares, it was too late.

Even now, in the face of impending death, the villain showed no signs of fear. His face remained composed and relaxed, almost as if he welcomed the tagging fire that was about to consume him. Then again, Somerset questioned if Necron, as the man called himself, was really human any longer. After all, why would a demon be afraid of the flames of hell?

The warlock’s grey eyes fixed on Somerset, and a sardonic smile played across his face. There was no sense of defeat in Necron’s magnetic gaze, only anticipation. That wasn’t the look of a man who expected to die.

The bastard is looking forward to his punishment
.

The insight filled Somerset with a renewed wave of terror.

If Necron wasn’t fazed by the prospect of his own immolation, it could signify only one thing: He had something planned.

The warlock’s voice was strong, even pleasant, as he addressed the Witchfinder General—so different from the guttural hisses that had exploded from those same lips as he desperately tried to weave a spell during their last encounter.

“So the famous Somerset McBride comes to see me burn,” the warlock said matter-of-factly, leaning as close as his heavy chains allowed. Eyeball to eyeball, less than a foot separated the witch hunter and warlock now. A chill rippled up Somerset’s spine, but he choked back his fear to the best of his abilities. This was ridiculous. The prisoner was at his mercy, feet and hands weighed down by heavy shackles. Yet it was Necron who set the tone of this encounter, his confident defiance sapping Somerset’s courage.

It is wise to fear a man who practices the black arts
, Somerset told himself. He’d secured the three grimoires in Necron’s possession. Without those accursed tomes—the source of the warlock’s terrible power—Necron was just another prisoner. Rationally, there was no need to be worried. But Somerset knew all too well that logic and magic made uneasy bedfellows.

“You seem awfully calm for a man about to face his judgment,” Somerset remarked in as measured a tone as he could muster.

“Does that worry you, my dear adversary?”

The warlock leaned even closer, but a sharp tug on the chains pulled him up short. The magician let out a sharp curse, grimacing as the soldiers yanked him back, and Somerset smirked.

So you can experience pain after all
.

But his satisfaction was to be short-lived. The preternatural calm and haughty, almost mocking air returned to Necron’s features as he regarded Somerset and the villagers who’d ventured into the clearing to witness this execution. The crowd shrank away under the warlock’s impenetrable glare.

“You’ve all gathered here tonight to see me succumb to the fire, but it is you who will die tonight. Leave now, and perhaps I’ll let you live out your miserable existence. Remain, and I promise you won’t see the next sunrise.”

A nervous rumbling passed through the gathered townspeople, and Somerset’s neck muscles bunched up with growing tension. Necron was stirring up the crowd. Chained, awaiting death, the warlock still managed to exert control over the situation. A master manipulator. Some of the villagers made signs of the cross and began a hasty retreat, unwilling to risk magical retribution for their presence.

Necron’s lips turned upward in a confident smile. “A new dark age will fall upon this world. The dead will rise and outnumber the living, paving the way for my lord’s return.”

There is only one true Lord, you fiend,
Somerset thought, his own sense of defiance surging within him. He nodded at the men to proceed.

The guards roughly shoved the warlock toward the pyre and bound Necron to the thick wooden stake at its center. Burning witches was an Old World tradition, a practice from a bygone age, which had mostly been abandoned in the Colonies. Nowadays British rule dictated that witches and warlocks should be hanged, but for Necron, the Witchfinder General had decided to make an exception. The more primitive form of execution suited his crimes. Something more dramatic than the noose was needed to restore the community’s faith and heal the wounds inflicted by the murderous warlock.

There was another reason to choose fire. Somerset feared Necron’s followers might try to revive the warlock’s lifeless corpse or use parts of him in their own terrible rituals. An example had to be made of this dark mage, so as to discourage others from following his twisted path. The flames would erase Necron from existence. The New World had to be cleansed of black magic. It should be a place where humanity could start anew, free from the fears and evils of the old continent. A new world indeed, where innovation and the light of science would finally defeat the old superstitions and allow mankind to reach its full potential.

As the soldiers secured the chains around the stake, Necron followed their efforts with an almost bored expression. Taking a step toward the pyre, Somerset suddenly noticed a flash of torchlight playing across a strange object near his feet, gleaming like a knife’s edge in the dark. He knelt down and scooped up the mysterious item in question.

Closer inspection revealed it to be a glass vial. Had the warlock dropped it there? What did it signify? Perhaps there was a simple explanation for the warlock’s lack of fear in the face of death. Had one of the villagers slipped the fiend a drug? Doubtless the warlock counted followers among some of the colonists, men and women drawn to the promise of his supernatural power. A narcotic might account for Necron’s detached behavior. It would dull the senses, replace a state of abject terror with a euphoric high. Somerset hoped with all his heart this wasn’t the case. After what he’d seen in the Necron’s keep of horrors, he wanted the warlock to suffer.

Somerset nervously scanned the clearing, taking in the crowd of villagers more closely. He recognized some of the worn, wary faces, the families of the murdered girls who’d gathered to see the killer meet his just fate. Somerset prayed it would provide some small measure of comfort and closure for them. No execution would ever be able to fill the emptiness in their gutted souls, but at least they would sleep soundly at night knowing Necron would never, ever again claim an innocent life.

His sense of unease deepening, the witch hunter decided it was time. An irrational feeling of urgency had taken hold of him, his senses on full alert. The empty vial in his hand seemed like a omen of greater horrors to come, giving rise to a stream of dark thoughts.