Read Gently at a Gallop Online 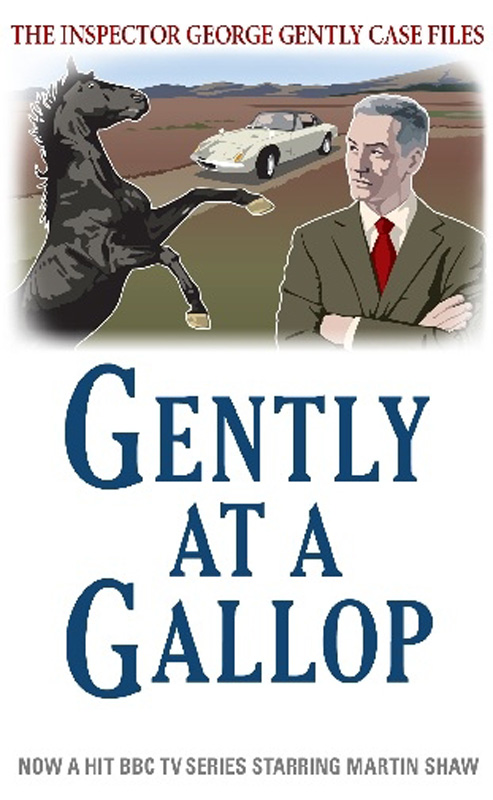 Alan Hunter
was born in Hoveton, Norfolk, in 1922. He left school at the age of fourteen to work on his father’s farm, spending his spare time sailing on the Norfolk Broads and writing nature notes for the
Eastern Evening News
. He also wrote poetry, some of which was published while he was in the RAF during the Second World War. By 1950, he was running his own bookshop in Norwich. In 1955, the first of what would become a series of forty-six George Gently novels was published. He died in 2005, aged eighty-two.

First published in the UK by Cassell & Company Ltd., 1971

This paperback edition published by Robinson,
an imprint of Constable & Robinson Ltd., 2013

The right of Alan Hunter to be identified as the author of this work has been asserted by him in accordance with the Copyright, Designs & Patents Act 1988

This is a work of fiction. Names, characters, places and incidents are either the product of the author’s imagination or are used fictitiously, and any resemblance to actual persons, living or dead, or to actual events or locales is entirely coincidental

S
EAWARDS THE SUN
was burning off the mist, but as yet it still clung to the high plateau of the heath. The thick bush-heather was sodden with moisture and scoured Cator’s stout boots as he stumbled through it. It was August, and the heather was flowering, but in the mist it was dark and drab: more colourful were the yellow tabs of the gorse, which grew in low, scanty islands.

The heath was silent. It had little bird-life. Cator had rarely seen a snake or a lizard. Between the continents of ling and bell heather ran trackways of stones and growthless grey sand. The slanted plane of the heath was fretted with valleys and frequent ridges and hollows. Towards the sea it cut off sharply in precipitous falls, bushed and pathless.

Cator reached the mouth of one of the valleys which drove upwards to the summit of the heath. Its sides were shaggy with shoulder-high bracken in which tints of russet had begun to show. To his left, above a hard skyline, a pale disc of sun swam in the vapour; for brief seconds it warmed the valley with a surge of colour, then chilled and faded in fresh wrack.

Cator plodded on. Up the valley ran a track, but it was narrow and impeded by the wiry heather. Once, where it crossed a burn of sand, he checked his stride, seeing there the print of a horse’s hoof. A recent print . . . ? Cator couldn’t be certain. Not many riders ventured this way. He planted his boot on the half-moon, leaving in its place a pattern of nails.

Now he was half-way up the valley and approaching its solitary landmark. This was a ragged thicket of hawthorn and bramble, drooping down the right-hand slope. Nearing it, Cator paused again. He had noticed an object at the foot of the hawthorns. Dark and still, it resembled a small heap of wet, discarded clothing. Somebody lying there? That seemed unlikely, in the early-morning mist. Cator’s breath came faster. He began to lope forward, careless of the heather that soaked his ankles. He reached the hawthorns. He saw death. Cator wasn’t afraid of death. A farm-worker, he was familiar with the stiffened carrion of dead animals. The animal here was a man-animal, but Cator saw it without shock: he stood staring, breathing through his teeth, trying to understand what he saw.

The body was male; it was wet; it was stiff; it had received damage. It lay on its back with one arm thrown up and the other evidently fractured, and the hand crushed. One leg also was apparently fractured and the chest had a curious, sunken appearance. The features were partly pulped and they retained a semicircular impression in the broken flesh. Around the body were signs of disorder. Cator noticed scuff-marks in the sand. An area of heather-bush had been churned up and several of the embedded flints were kicked out.

Though he’d never met such a thing before, Cator could guess what he was looking at: this man had been savaged by a horse. It had left its signature in his face.

Cator felt horror. He took some steps backwards, when suddenly the sun broke through behind him. It lit the dank side of the valley and coloured the mist still heaped above it. And on the mist, printed high and clear, was the rainbow shadow of a gigantic horseman, sitting motionless, his horse still, his face turned, watching Cator. It was the illusion of a moment; then the mist closed again. The rasp of Cator’s breathing had been the only sound to accompany the phantasm.

Cator ran. He dashed up the valley, his legs pumping like machines, boots squeaking in the heather, arms thrashing the moist air.

On a ridge behind him sat the horseman whose presence had occasioned the phenomenon.

He was dressed in black, and rode a black horse.

‘Does the name Lachlan Stogumber mean anything to you?’ the Assistant Commissioner (Crime) asked Gently.

Gently considered it, making at the same time a swift mental review of the morning papers.

‘Is he a pop singer?’ he ventured.

‘Does he play for Spurs?’

‘He isn’t a footballer. At least, I wouldn’t think it likely.’

The A.C. grinned. ‘Admit it,’ he said. ‘You don’t know him. The man Stogumber has made no mark in your nasty, criminous little sub-world.’

Gently rocked his shoulders. ‘My loss,’ he said. ‘So who is Stogumber – among the elect?’

‘The elect,’ the A.C. said, ‘being the pot-smoking stratum and presumably the editor of the
New Statesman.
He’s a poet.’

‘According to the authorities quoted. He’s the young Byron of the jazz idiom. Allow me to make an introduction.’

The A.C. picked a copy of the
New Statesman
from his in-tray and folded it back at a marked page. Gently accepted it without enthusiasm; a culture session was not among his priorities. The Assistant Commissioner, it was as well to know, had himself published verse when at Cambridge: he had been a near-contemporary of Auden and Spender, and rather viewed himself as leaguing with them. The politic didn’t lightly enter upon these topics with the A.C.

Gently fidgeted. ‘This isn’t my century. I’m a little Après-Keats-le-déluge.’

Gently sighed, and tried reading Stogumber. Stogumber was less enigmatic than Gently had feared. His title,
A Mood A
, was not explicit, but the words that followed had a wistful coherence. 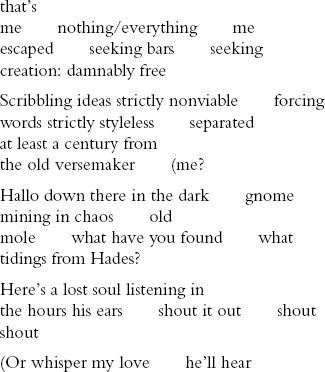 Gently cleared his throat. ‘Interesting,’ he said. ‘It could be a code, but probably isn’t.’

‘There you go,’ the A.C. said. ‘I think Stogumber has passion. I’m not sure that I’m sympathetic with his excursions into punctuation, but I like his energy, and the shrewd picture of a creator stuck for a subject. Brainumbra – rather fine.’

‘I’m coming to it,’ the A.C. said. ‘Briefly, Lachlan Stogumber had a brother-in-law called Charles Berney – a brewer.’

‘They’re the people. They were taken over by Watney’s in a reshuffle a few months back. Berney was given a seat on the new board and the usual office and pseudo-job, very pleasant. It left him free to pursue what was apparently the hobby of a lifetime.’

‘But Berney is dead?’

The A.C. nodded. ‘He died on Tuesday. He was trampled by a horse.’

‘So what is our interest?’

‘Just that. The Mid-Northshire Police are uneasy.’

Gently stared blankly. ‘But it’s an Act of God – being trampled by a horse!’

The A.C. nodded sympathetically. ‘And a ruling you would expect to appeal to constabularies in the remoter provinces. Brewer stricken by Act of God. Divine judgement on Berney’s Fine Ales. It must be all this box-culture that’s destroying the simple faith.’ He rubbed his chin. ‘Berney was a womanizer. That was the hobby I mentioned. He appears to have been keeping an assignation when he got mixed up with the horse.’

‘She hasn’t been identified.’

‘Who owns the horse?’

‘They haven’t found it.’

‘So,’ Gently said. ‘No horse. No woman. Just a brewer dead from injuries. Why couldn’t he have been knocked down by a bus?’

‘Because it happened on a heath,’ the A.C. said.

The A.C. graciously ordered coffee, which was fetched by a policewoman of elegant statistics. The A.C. drank his coffee waspishly, like a man remembering cigarettes.

‘Of course, Mid-Northshire may have made a cock-up and offended some people round there. Berney could have been savaged by a stray. You wouldn’t expect the owner to come forward. Then the local Keystones move in demanding alibis and insinuating adultery. Last resort: call the Yard, try to make it look real.’

Wings of Love by Scotty Cade
For the Thrill of It: Leopold, Loeb, and the Murder That Shocked Jazz Age Chicago by Simon Baatz
Nordic Lessons by Christine Edwards
Game of Queens by Sarah Gristwood
At Home with Mr Darcy by Victoria Connelly
Trafalgar by Benito Pérez Galdós
Devil's Vortex by James Axler
Baxter Moon, Galactic Scout by John Zakour
The Supernaturalist by Eoin Colfer
Fast Slide by Melanie Jackson
Our partner