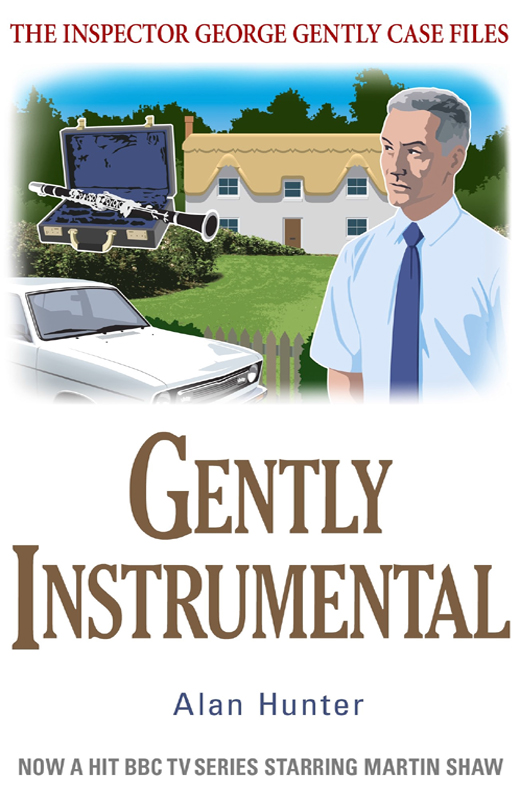 Alan Hunter
was born in Hoveton, Norfolk in 1922. He left school at the age of fourteen to work on his father’s farm, spending his spare time sailing on the Norfolk Broads and writing nature notes for the
Eastern Evening News
. He also wrote poetry, some of which was published while he was in the RAF during the Second World War. By 1950, he was running his own bookshop in Norwich. In 1955, the first of what would become a series of forty-six George Gently novels was published. He died in 2005, aged eighty-two.

Gently by the Shore

Gently Down the Stream

Gently Through the Mill

Gently in the Sun

Gently with the Painters

Gently to the Summit

Gently Where the Roads Go

Gently with the Ladies

Gently with the Innocents

Gently Where She Lay

Gently in the Trees

Gently Where the Birds Are

First published in the UK by Cassell & Company Ltd, 1977

This edition published by C&R Crime,
an imprint of Constable & Robinson Ltd, 2014

The right of Alan Hunter to be identified as the author of this work has been asserted by him in accordance with the Copyright, Designs and Patents Act 1988

Cover by David Woodruffe and design by Joe Roberts

S
INCE MAY THERE
had been no rain and now it was the twenty-fourth of August. Though a little haze had appeared that day it had done nothing to temper the glaring heat. A smoky wrack, it had driven over the sky to turn the sun into a baleful eye: a taunting spectre that half-hinted at some phenomenon forgotten. Then the sea breeze had stripped it away, the breeze that didn’t cool the sun, didn’t colour the bleached sky or refresh the sear trees. And the sea itself was tired. It barely whispered along the shingle-banks (there were no beaches on the coast beside which the small town lay): a grey, drained, uneasy plain, furrowed with waves too weary to break, it fretted at its edge the blunt pebbles which in storm it had heaped high. So long the sun had burned unchallenged! The bricks, the pantiles were never cool. Here and there streets, scarred by melting, had been roughly patched by council workmen. Hot in the air hung the smell of the bitumen, which shoes carried to floors and pavements; while the stalls of the fishermen, though scrubbed and rinsed, smelled strongly as one passed by. When would it change? When would the drought break? In heaths behind the town burned fires – bright-eyed flames, visible afar, with lazy columns of smoke by day. The world had lurched to produce such a summer. And now it was Tuesday, 24 August. The Festival banners hung limp in the streets, sagged by the sun and beckoning . . . whom? Though dusk had come, and one bright star, still heat like sickness sealed the town.

‘Right then, people,’ Walter Hozeley said. ‘We’ll have to take the Larghetto again.’

In the Music Room there was a faint stir, a clink as someone put down a glass. Yes . . . they
would
have to take it again! And it wasn’t only the heat that was the problem. Though with both fans going and the windows wide . . . what would it be like in George V Hall?

But that was just tinkering, and everyone knew it. The fault didn’t lie with the Quartet. Playing together now for three seasons . . . five, if you didn’t count Second Violin. Not the Quartet and not the heat: and you certainly couldn’t fault Walter’s score.

Terence Virtue hadn’t picked up his instrument. Ebony and glinting silver, it lay on a cloth by his chair.

He must have known that all their eyes were on him. But what he was staring at was the open window, through which one glimpsed the darkening sea.

‘Nothing special, old man! Only this is the place, where we want contrast . . . all that lovely, lingering quality . . . the sensuous touch you do so well.’

‘Are you saying I’m not doing it?’

‘No, of course not! But we’ll just run through to get it set . . . and
hang
on to those notes, Terry. They bring out the
instrument
. I could hear you playing them when I wrote it.’

And quickly he turned to the others, spreading his hands, so that they cocked their bows at the ready, and watching only from the corner of his eye for Virtue to take up the clarinet.

He ducked head and hands. The muted strings came in together. Then the clarinet, just a breathing late, and so cutting short its first, key phrase. Would Hozeley halt them? He didn’t. But there was a sick look in his eyes . . .

Dr Capel, First Violin, sighed through his prominent Grecian nose. He was aware of, on his left, Laurel Hazlewood’s determined chin, and on his right the burly shoulders of Tom Friday, Viola. Then, beyond Laurel, the shadowed, neat face of Leonard Meares, bent over the cello, and centre, wearing tight slacks that accentuated his behind, the slender, swaggering figure of the clarinettist.

Because what these rehearsals had taught Capel had surprised him – not less than that Walter, old Walt Hozeley, Queen of the May, was a genius. Yes, a genius! How very surprising! It had perhaps occurred to nobody before Capel – that the old, grey-thatched aunty of Gorse Cottage was any more than a dilettante, a Festival cowboy.

In Shinglebourne, at least, he had no standing: just his smelly reputation. Virtue, he’d picked up at Eastbourne or somewhere, as one might pick up a tart. And yet, yet . . . in this
Festival Quintet
wasn’t he matching himself with Mozart – hadn’t he taken the
A Major Quintet
apart, to restate it in terms deliriously new?

Surely it would establish him: others must recognize it! That had been Capel’s growing conviction. This year would go down as Hozeley’s year, the year of the
Festival Quintet
. Shinglebourne had produced another genius in the grey-haired pederast of Gorse Cottage . . .

The cantilena ended, leaving clarinet and viola to pursue their dialogue with chords from Leonard. Fiddle under chin, Capel reached for a handkerchief to pat his broad, slanting forehead. He caught Laurel’s eyes, round with meaning. Yes . . . that little squirt was still at it! Oh, he could play: no doubt about that . . .
if
he wanted to. There was the rub.

And Walt, he still had that sick expression on his craggy, droop-mouthed face, eyes suffering under heavy brows, his hands beseeching, willing Virtue. Oh Walt, you damned old fool! Why mix sodomy with music? Chase behinds, if that’s your nature, but in the bowels of Christ, keep it separate . . .

The dialogue sank to its lush conclusion and the strings swept into their brilliant restatement. Virtue, freed, turned his back on Hozeley and once more stared out of the window. The bastard! It was deliberate sabotage . . . both of the
Quintet
and of Walt. What was the point of going on with the rehearsal . . . or Saturday’s performance, if it came to that?

Yet he re-entered just on time, with a sneer on his delicately formed features, and for some moments in the coda played flawlessly, as, if he’d wished, he could have played throughout. A taunting glimpse of the real thing, the talent that Walt had seen in him – had nurtured and developed, and at last provided with a perfect vehicle. Goddamn sex! Yet perhaps, without it, the
Festival Quintet
would never have been written.

Smooth, smooth, Walt’s hands were saying, smooth to the exquisite ending, the seabird’s note that fails in the fading surf of the strings . . .

The strings responded, soft, softer, with the ground-swell of the cello muting. The clarinet, on the other hand, blew a raucous ‘Colonel Bogey’.

Walt’s face had turned pale – good heavens, you could see the old woman in him! There, in his trembling thin lips and hurt eyes, tear-filling. And his body had drooped, lost its mannishness, might have been that of an ageing dowager, while his hands, at times so masterful, now quavered in their weakness.

Virtue’s brown eyes were like a weazel’s, staring, steady: you felt he was judging you, passing sentence. Slim, dark, in a huge-collared shirt unbuttoned across a hairless chest, brown hands lightly clasping the clarinet, teeth white in a half-grin.

‘What are you on about, Aunty?’

‘Terry, don’t you understand? This is your chance, a chance that may never come again.’

At which point, Capel thought, I would certainly have hit him.

But Walt didn’t hit him. The poor dolt was still infatuated, still thought the young devil would show him mercy. Oh dear! And Laurel, Miss Hazlewood, drinking it all in with wide eyes.

‘Well, I’ve had enough, anyway.’ This was Leonard, unwinding himself from the cello.

‘Me too,’ Tom Friday said. ‘What I need is a ruddy great drink.’

‘Then eff-off and get one,’ Virtue sneered at him.

‘But what on earth is the use, Walter?’ Leonard demanded. ‘Can’t you see this rehearsal is done for?’

‘No, no.’ Old Walt made an effort to become the hearty conductor again – his usual pose, and quite unconvincing: now it was well-nigh caricature. ‘Terry doesn’t mean anything, do you, Terry? This heat is getting us all down! Let’s break for a smoke, people, and then we’ll take a crack at the Allegretto.’

But nobody gave a sign of accepting the motion.

‘
I
think we should have a showdown,’ Leonard said. ‘It’s only three rehearsals to Saturday, with every seat in the hall sold.’