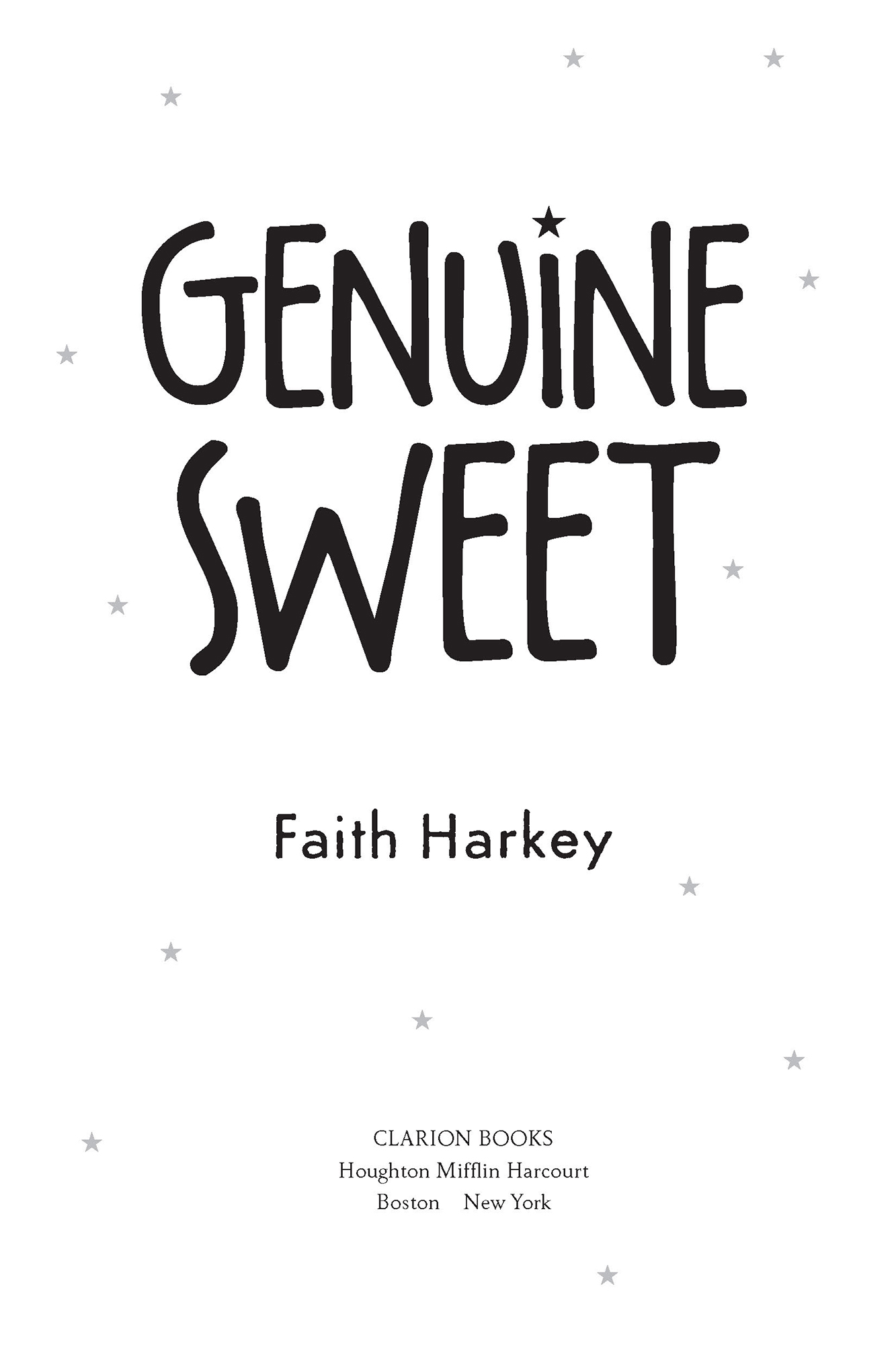 A Biscuit for Scree

A Glint of Silver

What Comes of It

The Library of Congress has cataloged the print edition as follows:
Harkey, Faith.
Genuine Sweet / Faith Harkey.
pages cm
Summary: Genuine Sweet, twelve, of tiny, impoverished Sass, Georgia, inherited the ability to grant any wish except her own but with help from new friends, her life and town are improving until unexpected trouble arrives and Genuine learns the difference between wishing for a better life and building one.
ISBN 978-0-544-28366-4 (hardback)
[1. WishesâFiction. 2. MagicâFiction. 3. Family lifeâGeorgiaâFiction. 4. Community lifeâGeorgiaâFiction. 5. GeorgiaâFiction.]Â Â I. Title.
PZ7.1.H37Gen 2015
[Fic]âdc23 2014027739

For the joy of itâ

G
ENUINE SWEET. THAT'S ME. AND SINCE EVERYONE
always asks how I came by such an unlikely name, I might as well tell you now.

Twelve years ago, on a night so dark the midwife couldn't find her way through the woods to our house, my ma gave birth to me. They say it was a long labor, and a hard one, and her body just tuckered out, so she died. But before she died, Ma held me in her arms and looked down at me and smiled.

Pa, whose family name is Sweet, was only slightly drunk when he added, “Ten fingers, ten toes, and ugly as get-out. A genuine Sweet.”

Gram swatted Pa on the head and told him to hush. “All newborns are a little soggy. They've been floating in goo for nine months.” Turning to Ma, she asked, “What'll you call her, Cristabel?”

Ma glanced at Pa, who she loved very much even though he was dumb as a post when he drank, which was most of the time. “Genuine Sweet. Genuine Beauty Sweet.”

I usually don't tell people about the “Beauty” part because, as you can see, I'm not one. Big buckteeth and more freckles than you'll find stars in a backwoods sky. But you don't seem like the teasing sort, and besides, you say you're here to know the whole story, and I believe you.

I guess the other thing you'll want to hear about is how I came to be in such an unusual line of work. There aren't a whole lot of twelve-year-old wish fetchers, and even fewer who end up in a muddle like mine. So here's the truth, plain and simple. My gram used to say this, by the way. I never take credit where it's not due. She said,
Necessity is the mother of invention.

See, in small towns like Sass, Georgia, towns where one logging company employs three-quarters of the citizenry, you don't find a whole lot of fresh opportunity. So when Pa Sweet showed up drunk to work one day and nearly cut off Bill Hasting's right hand with the circular saw, there weren't too many other jobs for him to choose from. He did apply for the part-time security opening at the old folks' home, but as you might imagine, no one was too pleased with the idea of leaving the safety of all those seniors to Dangerous Dale Sweet, as he'd come to be called.

Me and Pa were broke. Gram kicked in as much as she could from her Social Security check, and moved in with us to help make ends meet, but in the end, we were hungry most of the time, and even chubby Gram was starting to look a little pinched.

One night, as I lay in bed, my stomach rumbling something fierce, I tried to think of an idea, anything to bring in a little extra cash. I was no scholar, so a career in tutoring the younger kids was probably out. And as for babysitting, who would ever hire Dangerous Dale Sweet's daughter?

About then, I started thinking of Gram's vanilla spice cake, which, if you like sweets, I won't let you leave without the recipe for it. It's light and heavy all at once, just the thing to fill up an empty andâI'll say itâforlorn-feeling belly. So, there I was, thinking about that cake. With a glass of milk on the side. Warm milk, maybe, with a sprinkling of nutmeg on topâand all of the sudden I remembered something.

It had been some months prior, a few days after my last birthday, before Pa lost his job. Gram and I had been snacking on leftover vanilla spice cake, which still had holes in it from where my twelve candles had gone.

“Now that you've come to your womanhood, there's something you ought to know,” Gram had said.

I set down my fork to listen. As I mentioned, this was before we got to be so hungry that not even a black bear could have come between me and a piece of cake.

Gram reached into the pocket of her apron and pulled out a yellowed piece of newspaper. She unfolded it gingerly, so it wouldn't tear. The headline read,
MACINTYRE GIRL GRANTS BOY'S LAST WISH.
“That's Flo MacIntyre, my mama, your great-gram.”

I read the short clipping. It mentioned a crowd of people gathering to watch Great-Gram MacIntyre sing to the stars, which, somehow, had something to do with a sick boy who'd died happy.

I shrugged at Gram, baffled.

“You and me,” Gram began slowly, “and your ma, tooâall of us MacIntyre womenâwe're wish fetchers.” The way she said it, I could tell she felt she'd offered me the keys to a real treasure chest.

“Really?” I said, trying to rally some excitement. I knew I'd failed, so I went ahead and admitted, “I don't, uh, I don't know what that is.”

“No. No, I reckon you wouldn't.” She used her tongue to fiddle with her dentures. “All right. Think of it this way. Some folks are born knowing how to play the guitar. The first time you set the box in their hands, they can play you a tune. Right?”

“And some people can crochet a doily like nobody's business. Your great-great-uncle Felix was that way, Lord bless him.” She folded the clipping and set it back in her pocket. “The women in our family, we have a certain shine, too. We can draw down the magic from the stars. We can grant wishes.”

“Like the genie in the bottle?” I asked with a little laugh because, truth to tell, I didn't believe a word of it.

But she kept on.

“A genie is a made-up thing, an old story. Besides, genies were always trying to trick people,” said Gram. “Wish fetchers are real. The underlings of angels, my ma used to say, with humbler clothes.”

We didn't say much more about it then. It had been a nice story, I figured, but not much more than that, and surely Gram had been able to tell I hadn't been in a snake-oil kind of mood that night.

So, as I said, that's what I was thinking of on that hungry, hungry night some months ago. Vanilla spice cake and the clabberheaded notion that I might have wish fetching in my blood. Foolish, really.

And we were a fourth-generation
Sass
family, after all. The town was full of folks who had family shines. Everyone knew Mina Cunningham was a pain lifter and the Fullers could soothe bad dreams. But granting wishes? That was hanging the basket mighty high.

Just then, a mouse so familiar I'd named it Scooter skittered across the floor. Our house had more cracks than it did walls. It wasn't bad enough we were hungry. Winter was coming, and without money to pay the electric, we'd soon be cold. Dangerous cold. I was
scared.

But wishesâthat would remedy everything. Not just now, but forever.

All right, then. I'd play the huckleberry. But what should I wish
for?
At first, I wasn't sure. Maybe for my pa to wake up and get sober and fix things before they broke any worse. Not real likely. There was a better chance of my dead ma showing up at the door with angel's wings and a basket of money.

Food. House repairs. Electricity through the winter. All the things we needed. It pretty much came down to cash.

Now. How would a body go about fetching a wish? In the end, I couldn't think of any other way but to say it out loud.

I took a deep breath. In the moment before I spoke, my belly lurched. First, because my wish might actually come true. Second, because I knew it probably would not.

“I wish-fetch myself one thousand dollars!” I spoke into the night.

I know what you're thinking. Why only a thousand? But I reckoned if I really was a wish fetcher, I could always wish up some more. Better to start small.

The amount ended up not mattering a whit. I could have wished for a million. The outcome would have been the same.

But remember, now, I was desperate. There was no way I was going to give up after the first try.

No, what I needed was a little schooling.

I got up out of my bedâwhich was the living room sofaâand went into Gram's roomâwhich used to be my old room.

“You sleeping, Gram?” I whispered.

“Shht. Gram. It's just me.” I sparked a match and lit the candle beside her bed. “I need to ask you something.”

“You scared the golly out of me!” Her face looked a little green in the candlelight.

“Well, what is it?” Gram sat up in the grumpiest manner she could muster.

“Do you think .Â .Â .” I looked at the flickering of the little candle flame.

My stomach rumbled. I stuck my fist in my gut to shush it. “Did you mean what you said, after my birthday, about all that wish-granting stuff?”

I nodded, chewing on that. “Do you think you might teach me to grant wishes?”

She smiled just a little. “I think I could.”

“And then I could wish us a better life? With money and food and all?”

“A wish fetcher can't grant their own wishes, Gen,” she replied.

I pondered that for a while.

“Well, you can do it, too, right? What if you grant me and I'll grant you and we can both of us grant Pa? He could use a double dose of wish, surely.”

I flared my nostrils. There's few things that bother me as much as a person who gives up easily. “Gram, you are hungry, ain't you?”

“You wanna be hungry any longer than you absolutely have to be?” I asked.

Just then, her belly made a sound like an angry cat.

“Then shouldn't we at least
try?
”

She thought this over.

“Lemme tell you a true story.” She wrapped a blanket around my shoulders.

“A mess of years ago,” she said, “there was a man, a wish fetcher who lived in the city of Fenn. It was a big city, one of the grandest in all the South, mostly because of this man, who spent his days granting the good-hearted wishes of the people.” She pointed a finger at me. “
Good-hearted wishes.
Let that be the only kind you ever fetch, you mark me?”

“So, here's this man,” Gram went on, “granting wishes. And one day he wakes up and realizes everyone in Fenn is getting everything they wantâexcept him! He'd fetched wishes for loving wives and housefuls of kids, good jobs and good health, and what did he ever get from it? He lived comfortably enough, sure, but
he
had no wife, no kids, no job but granting wishes, and, sure as sunshine, he came down with a bad cold every August, no matter what.”