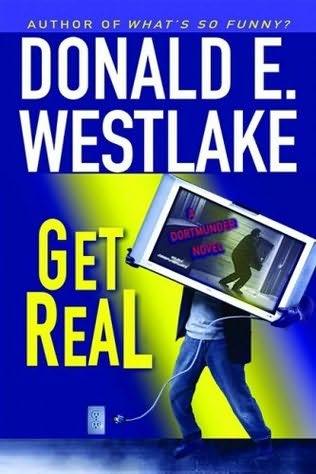 Money for Nothing • The Hook • The Ax • Humans • Sacred
Monster • A Likely Story • Kahawa • Brothers Keepers • I Gave at the
Office • Adios, Scheherazade • Up Your Banners

Smoke • Baby, Would I Lie? • Trust Me on This • High Adventure •
Castle in the Air • Enough • Dancing Aztecs • Two Much •
Help
I
Am Being Held Prisoner • Cops and Robbers • Somebody Owes Me
Money • Who Stole Sassi Manoon? • God Save the Mark • The
Spy in
the Ointment • The Busy Body • The Fugitive Pigeon

Under an English Heaven

Once Against the Law (coedited with William Tenn)

Television isn’t something you watch.

Television is something you appear on.

D
ORTMUNDER DID NOT
like to stand around on street corners. A slope-shouldered, glum-looking individual in clothing that hadn’t been designed
by anybody, he knew what he looked like when he stood for a while in one place on a street corner, and what he looked like
was a person loitering with intent. The particular intent, as any cop casting an eye over Dortmunder would immediately understand,
was beside the point, and could be fine-tuned at the station; the first priority was to get this fellow in charge.

Which was why Dortmunder didn’t like standing around on street corners: he hated to give cops the feeling there was duty to
be done. And yet, here he was, in the middle of a weekday morning in April, as obvious as a carbuncle in the pale glare of
the weak spring sunshine, the near-beer equivalent of real sunshine as in, say, August, but still plenty bright enough to
pick out a questionable detail as large as John Dortmunder, who happened to be waiting, in fact, for a cab.

But not just any cab. The cab he wanted to see before he became a known loiterer would be driven by Stan Murch’s Mom, Stan
being a fellow with whom Dortmunder had engaged in for-profit activities from time to time in the past. Murch’s specialty
was driving; when it became necessary to leave a location at speed, Stan was your man. And his Mom drove a cab; so that was
probably an argument for nurture.

Earlier this morning, Stan had phoned Dortmunder to say, “My Mom had an interesting fare yesterday, she wants to tell us about
it.”

“No, I think something interesting for us.”

So they were making a meet, except it hadn’t happened yet. Amid the coughing buses and snarling delivery vans of Madison Avenue
the occasional empty cab did go by, cheerful rooftop light gleaming its invitation, some even pausing fractionally to see
if Dortmunder felt like hailing anything, but none of them was piloted by Murch’s Mom, so he let them pass.

But then one did arrive with Murch’s Mom herself glaring out from behind the steering wheel. It angled to a stop at Dortmunder’s
feet, and he quickly took shelter in the back, already occupied by Stan, a carroty-haired guy with a skeptical slant to his
brow.

“Harya,” Dortmunder told him, and to the driver’s reflection in the rearview mirror, “Morning.”

“I need a traffic jam,” she explained, “so I can talk without distraction.”

As Murch’s Mom headed across Thirty-seventh Street toward her traffic jam, Dortmunder said to Stan, “How we doing?”

“I don’t think we
are
doing,” Stan told him. “I think we come to a stop. The last time I looked in my wallet, we’re growing mushrooms in there.”

“Does your mother’s anecdote have a cash crop in it?”

“I hope so. Mom wanted to wait and tell us both together.”

“So you don’t know what the story is here.”

“Nope. Mom wanted to wait and tell us both together.”

Since the conversation had deteriorated to a loop, Dortmunder abandoned it and looked out his window instead at the thin sunlight
out there, until Murch’s Mom made the right turn onto Eighth Avenue and sank contentedly into the perpetual blockage there,
a traffic snarl well into its second century, running—or not running—from below Penn Station up to above the Port Authority
bus terminal.

“Now,” Mom said, half turning in the seat, back against the door, one negligent hand on the steering wheel, “we can talk.”

“Yesterday I had a fare.”

“Coming in from Kennedy,” she said. “You know, when you pick up a fare at Kennedy, you don’t throw the flag, it’s just a flat
rate.”

“Says so on the back of your seat here.”

“That’s right. So there’s no point you do anything but the shortest quickest route. Not that any of them
are
short and quick.”

“So we were in a mess on the Grand Central,” she said, “kind of like this here—Hold on.” And she moved the cab two car-lengths
forward toward the next light. Then, “So the guy and I get into a conversation, he’s a TV guy, they do productions in New
York, I started to tell him about Stan here—”

Stan said, “Hello? You started telling him
what
about me?”

“Whatever,” his mother said. “Face it, Stanley, your previous occupation is coming to an end.”

Stan frowned at her profile. “How do you work that out?”

“Cameras,” his Mom said, and pointed at one mounted on a nearby pole. “Security. ID. Tracking. Records of everything. Global
positioning. Radio chips. It’s harder for people like you and John every day, and you know it is. It is time, Stanley, you
underwent a career change.”

Dortmunder said, “It isn’t that bad.”

“Oh, it’s all right for you,” she told him. “You go on doing what you’re doing because what else have you got, but Stanley’s
possessed of an actual marketable skill.”

Stan said, “Which skill is that?”

“Driving,” she said. “Keeping your wits about you. Anyway, the point is, I liked this guy, Doug Fairkeep his name is, so I
wound up I gave him a little more of your background than I originally planned.”

“It’s okay,” she promised him. “Turns out, what he is, he’s a producer of those reality shows, you know the deal, and when
he figured out what sort of driver you are and your kind of associates and all that, he got very interested.”

“He did. He wants to do a reality show of you guys.”

Dortmunder said, “That’s the shows where they follow real people around while they do real things. Kinda real.”

“That’s right,” she said. “Hold on.” And she burrowed the cab forward all the way across the intersection, at the same time
shifting one lane to the left.

Dortmunder waited till that maneuver was complete, then said, “What does he want to follow
us
around while we’re doing?”

They both looked at her as though she’d lost her mind. Dortmunder said, “He wants to make a
movie
of us, committing a crime?”

“He’s got some ideas,” she said. “How you could do it and not have anything fall on you. He wants to talk it over with you.”
Drawing a business card from her shirt pocket, she extended it toward Stan, saying, “Use your cell, give him a call.”

“When you’re committing a felony,” Dortmunder pointed out, “the idea is, you don’t want witnesses. What you want is privacy.
And you especially don’t want the entire television-watching population of America for a witness.”

Stan, who had taken the card from his mother’s fingers to study it, said, “Well, John, the guy does look legitimate.”

“Of course he’s legitimate,” Dortmunder said. “
We’re
the ones that aren’t.”

“While I’m over here anyway,” Murch’s Mom said, “I might as well pick up a fare at the Port of Authority. Unless you want
me to deliver you two somewhere, only I’d have to throw the flag. I still got a living to make.”

“Well, we’re stopped anyway,” Murch’s Mom observed, “so you might as well get out. I got my Port of Authority right over there.”

As they stepped out of the cab into this diorama of un-moving transportation at its worst, she opened her window to say, “Call
Fairkeep, Stan. The rest of your future starts right here.”

O
NE OF THE PRODUCTION
assistants had a problem. A short overweight girl named Marcy Waldorf, a very recent hire, she wandered into Doug Fairkeep’s
office at
The Stand
looking bewildered, which is to say looking mostly like a chipmunk on steroids. She held some script pages in her hand and
waved them vaguely as she said, “Doug, I’m sorry, but this just looks to me like writing.”

“Marcy,” Doug said, turning his attention with some relief from the budget for next week’s shoot, “what have you got there?”

“The script I’ve been writing, Doug,” she said, and held it out to him as though he’d never seen a script before. “And it’s
just—I’m sorry, Doug, this is
writing.
”

“That is not writing, Marcy,” Doug assured her, being patient and kind. This was not the first time he’d explained the facts
of life to a newbie. “Those are
suggestions.
”

Marcy now held the pages out in front of herself with both hands, as though she intended to sing them, but intoned instead:
“Grace: Why don’t we display the strawberries right next to the melons? Maybe then some people will buy both. Harry: That’s
a good idea. Worth a try, anyway.”