Read Ghouls of the Miskatonic (The Dark Waters Trilogy) Online

Ghouls of the Miskatonic (The Dark Waters Trilogy) 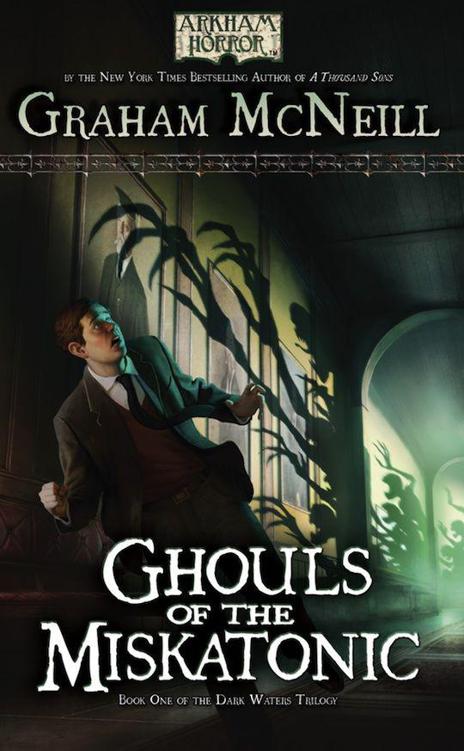 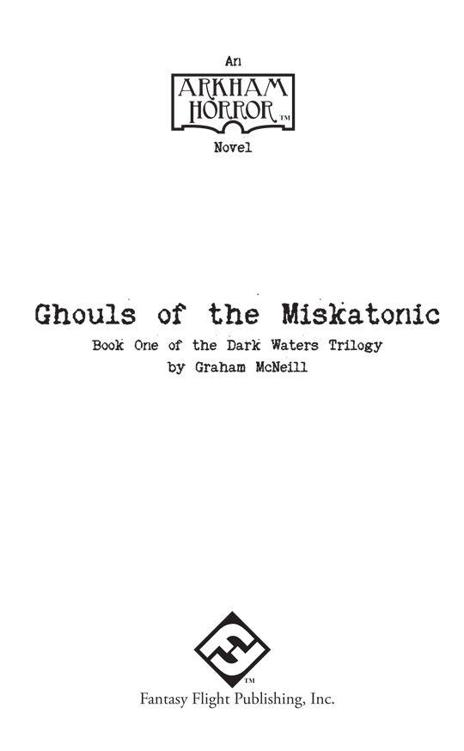 To the Wednesday Night Guys for all the years of horror, and to Dan Abnett, for the right word in the right ear.

This is a work of fiction. The characters, incidents, and dialogue are drawn from the author’s imagination and are not to be construed as real. Any resemblance to actual events or persons, living or dead, is entirely coincidental.

No part of this publication may be reproduced, stored in a retrieval system, or transmitted in any form or by any means, electronic, mechanical, photocopying, recording, or otherwise, without the prior permission of the publishers.

Find out more about Fantasy Flight Games and our many exciting worlds at
www.FantasyFlightGames.com
.

It starts with the sea. Always the sea. She loved the water, remembering weekends at her grandfather’s Vermont home on Lake Champlain, where she and her brother would swim out from the shore and dive down to try and see the coral reefs below the cold water. No amount of creepy tales her dad told her of Champ, the monster said to live in the lake, could dissuade her from swimming out as far as she could go. She loved the silky feel of water over her skin, the refreshing sharpness of jumping into its cold embrace, and the sense that she was almost flying.

So why did this dream of water scare her so much?

Perhaps because it was so vast, so enormous as to defy comprehension. She was floating in the middle of an uncharted ocean, so far away from land that it might not even exist. In this trackless ocean, land was a memory, a myth of ancient times forgotten by the denizens of this watery expanse. Without knowing how, she knew she was as far from land as it was possible to be on this spinning globe.

The ocean was peaceful, still and undisturbed, like a vast black mirror reflecting the stars wheeling above in their ceaseless dance. But some primal part of her felt a nascent terror that something was somehow out of place, disjointed, or otherwise out of alignment. She was adrift in the middle of the sea, lost and without hope of rescue, yet her fear was not of drowning, but rather of the isolation and the sense that she was an insignificant speck in the face of something unutterably vast, something too large and cosmic to be understood by a human mind.

No sooner had she formed the thought than she was dragged beneath the surface, and she felt the aching cold of the deep ocean envelop her as the water closed over her head. She gasped for breath, feeling the water pour into her lungs, filling them with bitter cold, yet leaving her able to breathe. She struggled against the invisible fetters pulling her down into the darkness, thrashing the water to bubbles as she plunged deeper and deeper into the abyssal void below.

Down into the depths she went, past the point where her struggles should have ceased, and past the point where the pressure should have crushed her body and left her as little more than food for the hunters of this lightless palace. It seemed like she descended into the deeps for a lifetime, the dim glow of starlight long since forgotten and the impenetrable darkness surrounding her completely.

She stopped struggling, knowing it was useless, and let the current—or whatever it was that had hold of her—take her down. Down, down she plunged, past any hope of return to the surface and the fleeting world above. At last her descent slowed and the darkness was leavened by a faint suggestion of light below, a lambent greenish glow carpeting the irregular surface of the ocean bed.

The floor of this deep abyss was not flat; it was a rugged mountain of titanic blocks, like the remains of some ancient city of giants left to fall into ruin over millions of years. Vast stones and gigantic statues, taller than the greatest skyscrapers taking shape on the New York skyline, towered over this dead city. Mute sentinels were garlanded with shimmering seaweed and encrusted with barnacles. This was an alien place of the unknown and the mysterious.

She floated above this vast island, now seeing its far-flung boundaries and knowing that this place had once basked in the sunlight of the world above. In ages past, this sunken enclave had known the touch of the wind and the lash of salty breakers. The thought of this place rearing up like a mountain range above the ocean’s surface filled her with dread, and her gaze was drawn toward an arrangement of blocks vaguely reminiscent of a great archway, miles high and surely too enormous in scale to be required for anything living to pass through.

A dread moaning drifted from somewhere far beyond the archway, the mumbled moans of some vast sleeper who dreams fitfully in an eons-long slumber. The meaningless garble of syllables and animal noises were unintelligible to her, but filled her with such dread that she could not bring herself to look into the blackness of the arch for another second. The sound of pipes and echoing chants from distant lands seemed to swirl around the island, as though in answer to the dreamer’s wordless call.

This was the source of her nameless fear, this city of something dead yet still enduring and sunk beneath the sea to keep it from the world above. Though surely she was too deep for starlight to penetrate to the ocean floor, she saw the reflected light of ancient suns glistening on the glassy surface of polished blocks of unimaginable scale, tracing their patterns across the island tomb until they reached their appointed positions in the heavens. As she watched, the ocean floor shook with the tectonic heaves of a great undersea earthquake. Billowing clouds of sand geysered up from the bottom of the ocean as the monstrous island shifted and the siren song of meaningless chants intensified.

The fear she had felt previously peaked into a terrifying crescendo of horror as she felt something move deep beneath the accursed island, something of infinite alien malice and uncaring destructiveness. She looked up, seeing something hanging in the ocean above her, a glittering orb of bronze. Yet even as she caught a glimpse of this new strangeness, the clouds of sand obscured it as the island broke free of the ocean floor.

Swirling water-borne sandstorms engulfed her, but not before she saw something gigantic and monstrous moving in the shadow of the great archway. Too vast to be anything living, too hideous to be anything of this earth, it moved with great lumbering steps, gelatinous and fashioned from matter beyond human conception.

She awoke with the undersea scream on her lips, her heart beating a furious tattoo on her ribs, and her bed sheets soaked in sweat. The covers were bunched in her fists and as her gaze swept the dorm room, she felt a momentary dislocation as the angles of the room she shared with Rita seemed to warp and twist like she was drunk.

Amanda glanced over at Rita’s bed, seeing it was unoccupied. Rita’s nightclothes were folded on the pillow, and there was a glass of half-drunk water on the bedside cabinet. The first rays of sunlight poked through the blinds, illuminating a picture of some foreign long-distance runner tacked to the wall above Rita’s bed. Amanda took a deep breath as she tried to slow her breathing.

She closed her eyes, but that only made the fleeting vision of that dreadful…
thing
flicker on the inside of her eyelids like the jittery images at the beginning of a movie reel. Her stomach lurched and she felt a swimming nausea uncoiling in her gut, reaching up toward her throat. Amanda threw off her bed sheets and bolted for the door, pulling it open and running down the corridors of Dorothy Upman Hall to the communal washroom facilities she shared with sixty other female Miskatonic University students.

No one else was up yet, and she was grateful for that as she lurched along the corridor and through the door to the washroom. Amanda launched herself at the nearest basin in the line, just in time, and emptied her stomach of last night’s meal in one explosive expulsion. She coughed and spat acidic bile from her mouth, holding tight to the cold porcelain and letting herself sink slowly to the green-and-white tiled floor.

With her forehead pressed tight to the edge of the sink, Amanda felt a measure of equilibrium return. The coolness of the porcelain and the hardness of the tiled floor were reassuring in their normality, the solidity of the waking world enfolding her in its comforting safety.

“Jeez, Mandy, you okay?” said a voice with more than a hint of the Bayou to it.

Amanda turned her head and saw Rita standing farther along the line of sinks, clad in her knee-length running skirt and a cotton top with “M.U. Athletics” printed on the front. Rita spat toothpaste into the basin and was at Amanda’s side a second later, helping her to her feet. Satisfied Amanda wasn’t about to keel over, she filled a cloudy glass from the tap and handed it to her.

“Here, get this down you,” said Rita.

“Thanks,” said Amanda, swilling the water around her mouth and spitting the last of the acrid remnants of last night’s beans and chicken into the basin.

“You been having that damn dream again?” asked Rita. “How many nights is it now?”

“The hell you say,” said Rita. “More like you been waking up screaming for two weeks now. Trust me, I know.”

“Don’t be foolish,” said Rita. “I ain’t looking for no apology. I’m worried about you.”

She saw Rita wasn’t convinced. Rita was a smart cookie, born and raised in New Orleans before winning an athletics scholarship and coming north to Miskatonic. Her skin was smooth Creole dark, with deep brown eyes and full lips. She was pretty in a way the boys hadn’t caught onto yet.

“Fine my ass,” said Rita. “You need to sort this thing out. You gotta speak to Doc Waldron. Get him to give you something to help you sleep.”

“No!” said Amanda, more sharply than she intended.