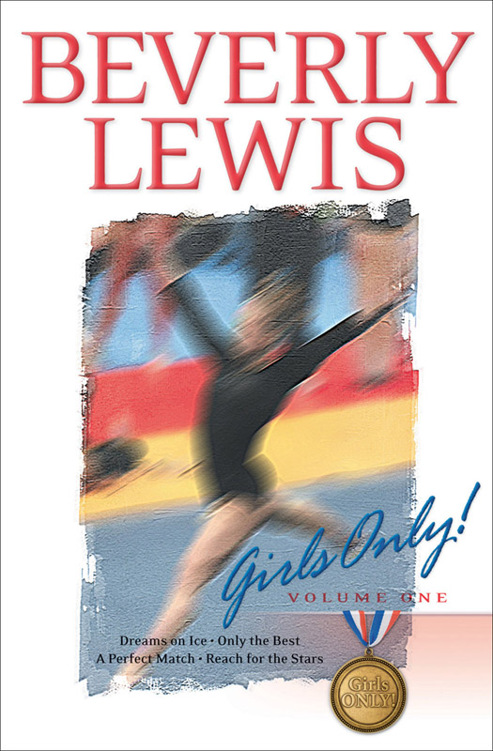 Girls Only! Volume One

Girls Only! Volume One

BEVERLY LEWIS is the bestselling author of more than eighty books for adults and children, including the popular C
UL-DE
-S
AC
K
IDS
and S
UMMER
H
ILL
S
ECRETS
series, several picture books, and numerous adult fiction series. Five of her blockbuster novels have received the Gold Book Award for sales over 500,000 copies, and
The Brethren
won a 2007 Christy Award. Beverly and her husband make their home in Colorado, within miles of the Olympic Training Center, headquarters for the U.S. Olympic Committee.

Special thanks to the U.S. Figure Skating Association and the U.S. Olympic Committee for research assistance. Also, hugs to Heidi Van Wieren, who answered all my questions about skating competitions, programs, judging, and jumps. And to each of my readers who asked me to please write another series—
for girls only
—thanks for your encouragment and wonderful letters!

devoted to her own ice

Olivia Hudson pushed off toward center ice. Gaining speed, she skated a smooth, backward glide across the practice rink—the setup for her next move. She dug her toe pick hard into the slick surface.

She leaped high into the air, tightening her arms against her body as she whirled around. A single skate met the ice on the back outside edge—the perfect landing for a super double flip.

Livvy clenched her hands in triumph, circling the arena. “I did it!” she shouted. Then, extending her left leg, she moved to a graceful spiral glide.

After a short cooling-down period, Livvy took her ten-minute break. “My timing’s still off,” she moaned.

Elena touched Livvy’s shoulder. “Don’t be too hard on yourself. We’ll get your sparkle back . . .
and
your confidence. You’ll see.”

I hope she’s right
, Livvy thought, hurrying off to get a drink.

Two heartbreaking months had passed since the coolest mom in history had lost her battle with leukemia. Livvy would never forget that June night, standing next to the hospital bed and holding the soft, dear hand. Never, ever would she accept the unbearable moment when she said her tearful farewell.

Yet here she was, anticipating her regular forty-minute skating session, trying her best to go on with life.

When she returned to the rink, she inhaled deeply, ready to go to work on her technique. “I need more practice on my flips,” Livvy said.

Livvy paused a moment on the mat-lined walkway. “C’mon, now . . .
focus!
” she told herself, stepping onto the ice.

She skated backward for the setup. But she entered the jump too slowly and tilted off balance, losing her footing on the landing.

“Rats!” she muttered and got up to try again.

She waited a bit longer into the glide before attempting the jump. But her concentration was off, and she fell to the ice.

I’ve landed this a thousand times
, she told herself.
I can do this!

Promptly, she got up and brushed the frost off her leg.

At eleven, going on twelve, Livvy knew enough not to be discouraged over one bad skating session. Often, she’d had to force her brain to focus on winning thoughts, even at her advanced novice stage. Only one step away from juniors!

“I believe in you,”
her mom had always said. The encouraging words echoed in her memory. Loud and clear.

Since her preschool days, Livvy had been attending group skating classes near Riverdale, the close-knit Chicago suburb she called home. And Mom never missed a practice.
“Keep smiling!”
she would call from the stands.

Skating was the best part of the day. Any day. Livvy would rather skate than sleep, even on a summer Saturday. She’d hopped out of bed at the first musical strains of the clock radio. Even though it might’ve seemed like the middle of the night to the rest of the neighborhood, she hurried to the kitchen for her usual cereal, fruit, and juice. Cold (and lonely) breakfasts were common these days.
Gone were the amazing breakfast specialties Mom often prepared: whole-grain waffles or homemade cereals.

Sighing, she skimmed the rink. “Oh, Mom, I wish you were still alive. I
need
you.” She glanced at the bleachers—Mom’s old spot—and thought about this one-sided dialogue.
Dad would probably be upset if he knew
, she thought.

Her father was a freelance artist—and totally occupied with deadlines. Definitely, he’d frown on her endless murmurings to her dead mother. She was absolutely sure he would, because after the funeral he’d stopped talking about Livvy’s mom. He didn’t even mention her name anymore.

Elena had said not to worry. “Your father is facing grief his own way. He’s a sensitive man. He’ll learn to cope . . . eventually.”

It seemed like a reasonable explanation at the time. But now—two months later—her dad was still silent. A dismal kind of silence that frightened her. Worse than that, she felt terribly alone in the world. Alone and wondering how she could possibly reach her skating goals without the support of a parent who understood her Olympic dreams.

On top of everything else, money was tight. Especially after her mom’s health declined so quickly and the hospital bills started pouring in. She honestly wondered if
they could even afford a new outfit for the Summer Ice Revue—in just ten days!

Livvy wished with all her heart she could talk certain things over with her dad. She’d outgrown her old costumes, for one thing. And she wished he’d show even the slightest interest in her skating. Or maybe just take her to practice sessions once in a while. Things like that.

But she knew his broken heart was stuck in the past, in those wonderful Mom-filled days before everything changed . . . for the worse.

“Try again, Livvy!” Elena’s voice always gave her the strength to start over.

Everything she had went into the next setup—her speed and every ounce of strength. She dug the toe pick hard and lifted her body up, up, high off the surface of the rink.

For three rapid rotations, she was flying. But the landing was off.

Livvy dropped her skate bag on the living room floor. “Dad, I’m home!” she called, wandering through the house. She found him in the family room, reading the evening paper.

He looked up only briefly. “Hi, Liv. Good day?”

“Horrible.” She dropped into the chair that had been her mother’s favorite—a cozy, old wingback—and stared at her tall, slender dad. He seemed to be growing thinner by the day. “I’m really worried,” she said softly.

His eyebrows arched as he peered over the paper. “Are you all right?”

“I’m worried about
you
,” she answered.

He sighed and folded the newspaper. Leaning back
against the sofa, his green eyes were serious, his lanky arms folded tightly against his chest.

“You aren’t yourself.” Livvy felt her heart pounding like a snare drum. “You’re tired all the time, Daddy. And you don’t eat enough.”

Without speaking, he ran his fingers slowly through his thick, dark hair. The silence unnerved her.

“I think I know what’s wrong.” Her throat felt tight. Achy. “I think I understand . . . because I miss Mom, too. I miss her more than ever.”

He blinked repeatedly, his gaze clearly fixed on her. It would do no good to continue. The conversation was going nowhere. Same as all the other times.

Frustrated, she stood up to leave, but his startling words stopped her. “I’m thinking of moving.” He paused for a moment. “There’s a mountain town in Colorado . . . not too far from Colorado Springs. I’d like to move us there before school starts.”

Livvy froze. This was her home—Dad’s too. And Mom’s! What was he thinking?

“We can’t . . . move, Daddy.” She stopped short of crying. There were hundreds of reasons for them to stay. Sensible reasons—more than she could count. But one of the best reasons on earth was her skating coach. How could she possibly leave the woman who’d brought her through all the early competitions of her life? Elena, who
had instructed her and cheered her on all the way to novice level—incredible for Livvy’s age.

She shook her head, hair swirling against her face. Standing, she faced her father. “How can you even think of doing this to me? You’re going to ruin my life!”

He frowned, then a helpless look clouded his face. “Perhaps we should consider having you stay here in Riverdale. Grandma Hudson has an extra bedroom.”

She could hardly believe her ears. Her father was going to abandon her? Move halfway across the United States? Hand her off to Grandma?

Nexus: Ziva Payvan Book 2 by EJ Fisch
The Judas Goat by Robert B. Parker
From Yesterday by Miriam Epstein
The Queen and the Nobody Boy by Barbara Else
Tango by Mike Gonzalez
The Case of the Psychic's Vision by Franklin W. Dixon
It Was Me All Along: A Memoir by Andie Mitchell
Fortress Of Fire (Book 4) by D.K. Holmberg
Something About You (Just Me & You) by Landis, Lelaina
Hamster Magic by Lynne Jonell
Our partner