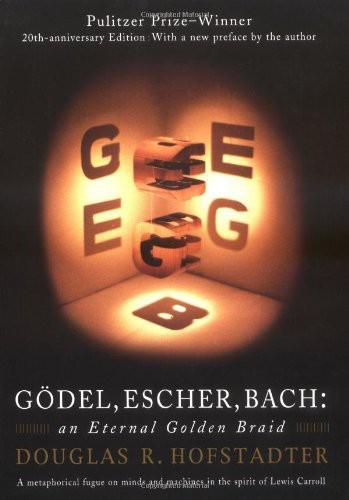 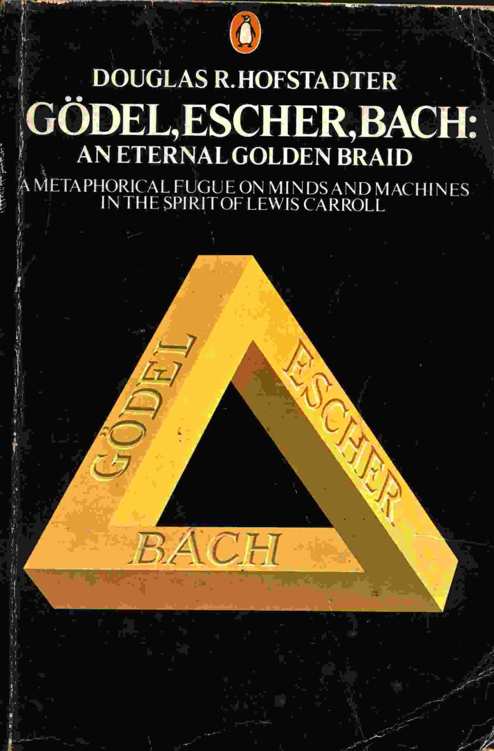 Chapter I: The MU-puzzle

Chapter VI: The Location of Meaning

Chapter XV: Jumping out of the System

Edifying Thoughts of a Tobacco Smoker

Introduction: A Musico-Logical Offering
. The book opens with the story of Bach's Musical Offering. Bach made an impromptu visit to King Frederick the Great of Prussia, and was requested to improvise upon a theme presented by the King. His improvisations formed the basis of that great work. The Musical Offering and its story form a theme upon which I "improvise"

throughout the book, thus making a sort of "Metamusical Offering". Self-reference and the interplay between different levels in Bach are discussed: this leads to a discussion of parallel ideas in Escher's drawings and then Gödel’s Theorem. A brief presentation of the history of logic and paradoxes is given as background for Gödel’s Theorem. This leads to mechanical reasoning and computers, and the debate about whether Artificial Intelligence is possible. I close with an explanation of the origins of the book-particularly the why and wherefore of the Dialogues.

Three-Part Invention.
Bach wrote fifteen three-part inventions. In this three-part Dialogue, the Tortoise and Achilles-the main fictional protagonists in the Dialogues-are "invented" by Zeno (as in fact they were, to illustrate Zeno's paradoxes of motion). Very short, it simply gives the flavor of the Dialogues to come.

Chapter I: The MU-puzzle.
A simple formal system (the MIL'-system) is presented, and the reader is urged to work out a puzzle to gain familiarity with formal systems in general. A number of fundamental notions are introduced: string, theorem, axiom, rule of inference, derivation, formal system, decision procedure, working inside/outside the system.

Chapter II: Meaning and Form in Mathematics.
A new formal system (the pq-system) is presented, even simpler than the MIU-system of Chapter I. Apparently meaningless at first, its symbols are suddenly revealed to possess meaning by virtue of the form of the theorems they appear in. This revelation is the first important insight into meaning: its deep connection to isomorphism. Various issues related to meaning are then discussed, such as truth, proof, symbol manipulation, and the elusive concept, "form".

Sonata for Unaccompanied Achilles
. A Dialogue which imitates the Bach Sonatas for unaccompanied violin. In particular, Achilles is the only speaker, since it is a transcript of one end of a telephone call, at the far end of which is the Tortoise. Their conversation concerns the concepts of "figure" and "ground" in various

contexts- e.g., Escher's art. The Dialogue itself forms an example of the distinction, since Achilles' lines form a "figure", and the Tortoise's lines-implicit in Achilles' lines-form a "ground".

Contracrostipunctus
. This Dialogue is central to the book, for it contains a set of paraphrases of Gödel’s self-referential construction and of his Incompleteness Theorem. One of the paraphrases of the Theorem says, "For each record player there is a record which it cannot play." The Dialogue's title is a cross between the word "acrostic" and the word "contrapunctus", a Latin word which Bach used to denote the many fugues and canons making up his
Art of the Fugue
. Some explicit references to the Art of the Fugue are made. The Dialogue itself conceals some acrostic tricks.

Chapter IV: Consistency, Completeness, and Geometry
. The preceding Dialogue is explicated to the extent it is possible at this stage. This leads back to the question of how and when symbols in a formal system acquire meaning. The history of Euclidean and non-Euclidean geometry is given, as an illustration of the elusive notion of "undefined terms". This leads to ideas about the consistency of different and possibly "rival" geometries. Through this discussion the notion of undefined terms is clarified, and the relation of undefined terms to perception and thought processes is considered.

Little Harmonic Labyrinth
. This is based on the Bach organ piece by the same name. It is a playful introduction to the notion of recursive-i.e., nested structures. It contains stories within stories. The frame story, instead of finishing as expected, is left open, so the reader is left dangling without resolution. One nested story concerns modulation in music-particularly an organ piece which ends in the wrong key, leaving the listener dangling without resolution.

Canon by Intervallic Augmentation
. Achilles and the Tortoise try to resolve the question, "Which contains more information-a record, or the phonograph which plays it This odd question arises when the Tortoise describes a single record which, when played on a set of different phonographs, produces two quite different melodies: B-A-C-H and C-A-G-E. It turns out, however, that these melodies are "the same", in a peculiar sense.

Chapter VI: The Location of Meaning.
A broad discussion of how meaning is split among coded message, decoder, and receiver. Examples presented include strands of DNA, undeciphered inscriptions on ancient tablets, and phonograph records sailing out in space. The relationship of intelligence to "absolute" meaning is postulated.

Chromatic Fantasy, And Feud
. A short Dialogue bearing hardly any resemblance, except in title, to Bach's
Chromatic Fantasy and Fugue
. It concerns the proper way to manipulate sentences so as to preserve truth-and in particular the question

of whether there exist rules for the usage of the word "arid". This Dialogue has much in common with the Dialogue by Lewis Carroll.

Chapter VII: The Propositional Calculus.
It is suggested how words such as .,and" can be governed by formal rules. Once again, the ideas of isomorphism and automatic acquisition of meaning by symbols in such a system are brought up. All the examples in this Chapter, incidentally, are "Zentences"-sentences taken from Zen koans. This is purposefully done, somewhat tongue-in-cheek, since Zen koans are deliberately illogical stories.

Crab Canon
. A Dialogue based on a piece by the same name from the
Musical Offering
. Both are so named because crabs (supposedly) walk backwards. The Crab makes his first appearance in this Dialogue. It is perhaps the densest Dialogue in the book in terms of formal trickery and level-play. Gödel, Escher, and Bach are deeply intertwined in this very short Dialogue.

"TNT" is presented. In TNT, number-theoretical reasoning can be done by rigid symbol manipulation. Differences between formal reasoning and human thought are considered.

A Mu Offering
. This Dialogue foreshadows several new topics in the book. Ostensibly concerned with Zen Buddhism and koans, it is actually a thinly veiled discussion of theoremhood and nontheoremhood, truth and falsity, of strings in number theory. There are fleeting references to molecular biology-particular) the Genetic Code. There is no close affinity to the
Musical
Offering,
other than in the title and the playing of self-referential games.

Chapter IX: Mumon and Gödel.
An attempt is made to talk about the strange ideas of Zen Buddhism. The Zen monk Mumon, who gave well known commentaries on many koans, is a central figure. In a way, Zen ideas bear a metaphorical resemblance to some contemporary ideas in the philosophy of mathematics. After this "Zennery", Gödel’s fundamental idea of Gödel-numbering is introduced, and a first pass through Gödel’s Theorem is made.

Prelude
... This Dialogue attaches to the next one. They are based on preludes and fugues from Bach's
Well-Tempered Clavier
. Achilles and the Tortoise bring a present to the Crab, who has a guest: the Anteater. The present turns out to be a recording of the W.T.C.; it is immediately put on. As they listen to a prelude, they discuss the structure of preludes and fugues, which leads Achilles to ask how to hear a fugue: as a whole, or as a sum of parts? This is the debate between holism and reductionism, which is soon taken up in the Ant Fugue.

Ruined by Amy Tintera
The Love Wars by Heller, L. Alison
Burn by Julianna Baggott
Come the Fear by Chris Nickson
Find the Innocent by Roy Vickers
The Texans by Brett Cogburn
Warrior's Daughter by Holly Bennett
Bending Bethany by Aria Cole
The Lostkind by Stephens, Matt
All of me by S Michaels
Our partner