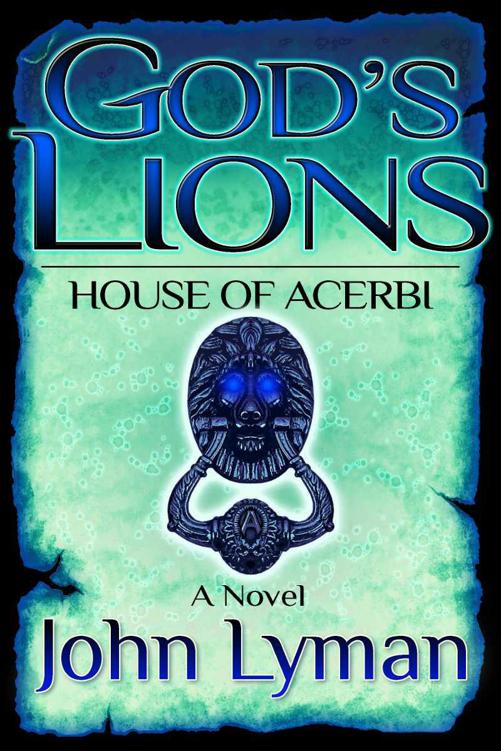 For my mother, Evelyn Lyman, and my father, Jack McCulley, whose adventurous spirits taught me that, despite its many flaws, the world is a place of both wonder and enduring enchantment.

Whoever fights monsters should see to it that in the process he does not become a monster. And when you look into an abyss, the abyss also looks into you.

And there shall be a time of trouble, such as never was since there was a nation

The name of the star is wormwood.

Cry havoc and let slip the dogs of war.

After the attacks of September 11, 2001, Bible code researchers went back to their computers and discovered the details of the attack encoded in startling clarity in the Book of Genesis. Using the ancient Hebrew text that has been handed down for the past 3000 years, they found the words
Twin Towers
encoded next to
Airplane
in the same place, and running across these two words was a message that sent chills up their spines—
It caused to fall, knocked down
. The odds against these words appearing together, encoded in the same place, are at least 10,000 to 1. But there was more. In Israel, the mathematician who discovered the code found the words,
the sin, the crime of Bin Laden
on the same page of Genesis where the original text of the Bible stated,
they saw the smoke rising above the land like the smoke of a furnace.

The South of France near Carcassonne

On the day when everything in her world would change forever, little Catherine Acerbi was skipping behind her mother through a field of tall sunflowers. For most of the morning, Catherine and her mother, Marie Acerbi, had been drifting on the slow-moving current of the beautiful Aude River, talking and laughing against the sound of insects buzzing along its banks, until finally the sun’s arc across the sky announced that it was time for them to go.

After walking through the field of flowers, they emerged at the base of a mountain trail and stopped to gaze up at a massive castle perched at the edge of a vertical cliff. The site of their fortress home had always been a source of fascination to the little girl, and in her imagination she had come to believe that a giant hand had somehow lowered the towering structure from the heavens to its lofty position just so she could watch the birds soar among the clouds outside her bedroom window.

Under a brilliant sun that had chased the blueness from the sky and turned it white, the two had just begun their climb up the steep path that led to the castle above when a flock of birds suddenly burst from a nearby tree and screeched into the sky over their heads. Startled, the two stopped just as the ground began to shake, while in the distance, they could hear the sound of thunder as the faint tremor beneath their feet grew into a steady rumble. The movement and noise continued to intensify, until soon it seemed as if the very air around them was vibrating in a tactile assault of both motion and sound that was quickly spreading across the land.

Looking to the north, Marie felt the hair rise on the back of her neck when she saw a cloud of red dust rising above the trees beyond the field, and it was coming closer.

The shaking in the ground grew stronger.

Marie held her daughter close and began to pray just as the undulating wall of red dust exploded from the tree line and rolled across the field. It was headed straight for them.

Marie began to run, but Catherine’s nine-year-old legs could barely keep up as her mother urged her on. “Come,
Chérie
, you must run. You are too big to carry now.”

Glancing back over their shoulders, the two witnessed a sight that made them freeze in place. Fast-moving black shapes were weaving through the tall sunflowers, trampling them in their path as they moved across the field.

Marie shivered in the heat.
It was as if the devil himself was riding across the land.

Against the sound of trumpets calling the castle’s defenders to arms, the two began scrambling up the side of the hill just as an advance group of soldiers came running down the path. Behind them, riding a wild-eyed horse padded for battle, Catherine saw her father holding his sword high, his long dark hair curling down over the shoulders of his armor. With a slight jerk on the reins, Armand Acerbi brought the snorting animal to a stop. Looking up at her husband, a knot of fear grabbed at Marie’s stomach, for she saw that he was smiling the smile of a warrior on his way to battle.

“Go quickly to the castle, my loves. Seal the doors. I will return!”

Marie ran to him, but as she reached out to touch his hand, their eyes met with a look of understanding, for it was evident by the size of the force now charging through the field below that Armand Acerbi would never return.

“And also with you, dear wife.” With that, Acerbi galloped away as Marie brushed the long blonde hair from her face and wiped the tears from her eyes before leading her daughter the rest of the way up the winding path.

At the top of the hill, Marie and Catherine raced under the grated portcullis into the castle’s inner courtyard, while down below, in a field of tall sunflowers, two armies well-versed in the art of medieval combat were now coming together in a violent clash of stabbing, merciless death. Pausing for a moment to gather her thoughts, Marie waited until the heavy iron grating had been lowered inside the main gate before motioning for Catherine to follow her up a narrow stone stairway.

With their swords drawn, two of her husband’s best soldiers ran behind her, for she was the lady of the castle, and her husband, Armand Acerbi, was its lord. Before he had departed for battle, Acerbi had given these two soldiers orders to protect his wife and young daughter with their lives.

“I’m coming!” Catherine cried. She looked up and saw her mother and the two soldiers disappear around a corner. Scrambling up the steps, Catherine caught sight of them running down a long corridor to her mother’s bedroom. Posting the guards outside, Marie motioned Catherine inside and closed the door. Marie crossed the room to a blackened fireplace and removed a stone block from the wall above the mantle. From a hollowed-out space, she removed a small wooden box—a box that young Catherine had never seen before. Placing the box on the table, Catherine’s mother slowly opened the lid and lifted three parchment scrolls from inside. She held them to her breast and closed her eyes for a brief moment before fixing Catherine with a look that caused the child to step back in fear.

“Here, little one ... take these. You must keep them safe. Hide them well and guard them always.”

“There are men outside the walls. Bad men. Your father has gone to fight them. The soldiers outside the door will take you to the tunnels beneath the castle. Hide these scrolls inside your tunic and go with them. Do what they say, Catherine. They will take you to my sister’s house in Carcassonne.”

“I must wait for your father to return,
Chérie
.”

With the sounds of battle outside growing louder, Marie Acerbi rushed to the open window and gasped. An army of mounted invaders dressed in black had just blown through her husband’s small band of men.

It had been a senseless gesture trying to defend this pile of stone,
Marie thought to herself. But deep down inside, she knew that her husband had been defending much more than just stone.
He had been defending his family and the honor of his people.

In the valley below, Marie saw a bearded man on a white horse looking down at the bloodied body of her husband lying next to his men in the field of trampled sunflowers. The man on the horse then swiveled in his saddle and looked up at the castle, and for a brief second it seemed to Marie that their eyes had met in an icy embrace. From the edge of the window, she watched as he turned to a soldier beside him and pointed to the hill. With the sun reflecting off his blood-splattered armor, the soldier waved his sword in the air and began galloping toward the castle. Within minutes, the dark invaders were swarming up the hill from all directions, their hearts pounding and their veins still engorged from the adrenaline-fueled frenzy of battle.

“You must go now, Catherine!”

Marie held her daughter close before opening the door to her room and nodding to the two soldiers outside.

“Watch over my daughter and remember my words well, for if my husband had not left you behind to guard his only child, your bodies would now be lying next to his in the field below. Your lives have been spared so that you would live to deliver his only child to my sister’s house in Carcassonne. You have been given a sacred trust, and if you fail in my husband’s final command to you, your very souls will be doomed to hell for all eternity!”

The two soldiers exchanged frightened glances as they both dropped to their knees and bowed their heads.

Good
, she thought, smiling to herself. Her speech to the two soldiers had obviously assured that they would pass through hell itself to deliver her daughter to safety. She bent down and took Catherine’s small face in her hands before kissing her gently on the forehead.

The Haunting of Hill House by Shirley Jackson
Falling Between (The Vaettir Serial, #1) by Sara C. Roethle
The Man in the White Suit: The Stig, Le Mans, the Fast Lane and Me by Ben Collins
Soldier's Redemption by Sharpe, Alice
Courting Emily (A Wells Landing Book 2) by Amy Lillard
The New Moon with the Old by Dodie Smith
Bought by Charissa Dufour
Wet: Undercurrent by Renquist, Zenobia
Dreamwielder by Garrett Calcaterra
Personal Protection by Tracey Shellito
Our partner