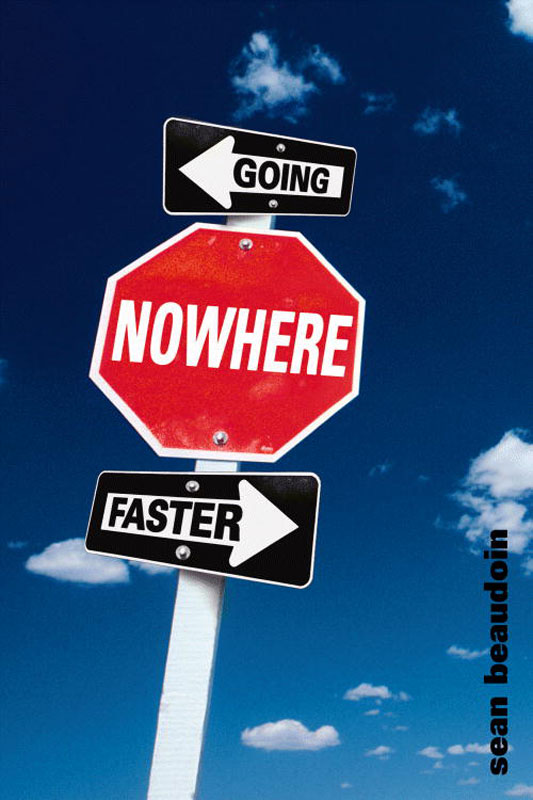 Summary: Although his past accomplishments have convinced everyone else he is headed for college and greatness, seventeen-year-old Stan just wants to work at Happy Video, live in his parents’ basement, write a movie script — and convince someone there really is a madman after him.

CHAPTER ONE: STRANGERS ON A very strange and long and boring TRAIN

CHAPTER FIVE: SUNSET is a bad time to be caught on the BOULEVARD of broken dreams

CHAPTER SEVEN: LORD OF THE very crunchy and salty and delicious pRINGle S

CHAPTER EIGHT: THE GRAPES and other unpleasant varietals OF WRATH

CHAPTER NINE: SPLENDOR or something equally as unlikely IN THE crumb-strewn GRASS

CHAPTER TEN: THERE’S not a thing SOMETHING absolutely nothing ABOUT Ellen MARY

CHAPTER ELEVEN: TAKE THE what MONEY AND where? how? RUN

CHAPTER TWELVE: THE BLUE but very talkative and lane-switching and horn-beeping ANGEL

CHAPTER THIRTEEN: THE bedridden and not worthy of it SHAWSHANK and foot-stank REDEMPTION

CHAPTER FOURTEEN: RAGING actually pretty calm but probably hungry and not at all happy BULL

CHAPTER FIFTEEN: THE really not all that BAD, okay, maybe that bad SEED

CHAPTER SIXTEEN: THE MAN actually “man” might be a slight exaggeration WHO KNEW actually very little TOO MUCH

CHAPTER TWENTY: A RESERVOIR of nostalgia for a town about to be left to the DOGS

CHAPTER TWENTY-ONE: OUT not entirely OF THE very recent PAST

For Jordan and Alec

Alice Jones, Lauren Tarshis, Connie Hsu, Christine Cuccio, Kirk Benshoff, and Catherine Beaudoin for their invaluable advice and critique during the development of this book.

Treatment for the feature-length film titled

Sgt. Rick Steele quits the force after his partner is killed in a bank robbery. He starts a detective agency called Steal Acquisitions, making a solemn vow to find the killer. Ten years go by, but all he’s done is find lost cats, follow cheating wives, and solve the mystery of a tasteless meatloaf (not enough garlic). One morning Ginny Lambert, tall and beautiful, walks (not walks, glides) into his office. Her twin sister has been kidnapped. (Twins? Man, oh, man.) Police are baffled. Leads are cold. Rick, looking deep into Ginny’s blue eyes, takes the case. That night he punches information out of various hoods and lowlifes, most of them named Maxie or Ratso. He learns Suzie Lambert was kidnapped by a Chinese white slavery ring. Rick and Ginny follow the trail to Shanghai, where Ginny’s sister is toiling on a collective work farm. The foreman, in an ironed green Mao jacket, is Scar Ramirez, the man who killed Rick’s partner! Just when they are about to free Ginny’s sister, they are captured and tortured . . . and . . . and . . .

Oh, who the hell knows? This is terrible, isn’t it? Next thing, there’s going to be a fight between Scar and Rick on top of the Statue of Liberty. Hey, maybe that’s not such a bad idea. Actually, it is. It’s a really, really terrible idea. Never mind.

STRANGERS ON A very strange and long and boring TRAIN

My name’s Stan, so right there I was more or less doomed from the beginning.

You don’t think so? Try this: Close your eyes. Clear your mind. Get to a comfortable place. What does the name Stan remind you of? Football star? Lead singer? Private detective?

Nope.
Stan
is a Hollywood agent who represents anorexic twins and says “Ciao” into his cell phone all day.
Stan
is your fat uncle, the one who ruins Christmas every year never shutting up about his shoe box collection or his divorce or his acid reflux. At any rate, Stan is definitely not me, which is to say: a skinny, bored, not-worth-half-his-paycheck counter boy.

3. Do you even need a number three?

As I stacked returns, a woman walked to the counter.

“Do you carry anything with Barbra Streisand?”

She gave me a confused look and left. We actually do have some (
way
too many) Streisand movies, but they’re all so awful I tend not to rent them. That may sound unfair, but I can tell you from experience that not a single person has ever returned
Yentl
with a smile on their face. Besides, I have other problems. Like how Chad Chilton wants to kill me. Why? He just does. On the last day of school he cornered me near the gym and said:

“I’ve never been good at multiple choice,” I said, mostly because Mr. Camacho, the Spanish teacher, was coming down the hall. Chad Chilton almost laughed, but didn’t. What he did instead was poke me in the chest, hard. “Have a good summer,” he said, and then walked away.

I rubbed my sternum. I decided to breathe.

“Cómo está?”
Mr. Camacho asked, with his big smile and his tan slacks and his Estrada chin.

“Totally
bien,
” I answered, and then went to my next class. That was two months ago. Now it’s the middle of August and I’m still more or less intact, so maybe I lucked out. Or maybe Chad Chilton forgot. I guess it depends how optimistic you (I) want to be (not very). Twice after work I’ve found my bike tires slashed. I’ve also found notes left in my parents’ mailbox: BETTER WATCH YER ASS! And someone spray-painted STAN SMITH IS GONNAA GET IT on the sidewalk in front of Happy Video. Bad spelling is a clue even Sergeant Rick Steele couldn’t miss.

Another problem, also sort of a minor obstacle, is that I have absolutely no chance of getting into any college, anytime, for any reason, under any circumstance, anywhere.

Mr. Lawlor owned a store down the street that sold (mostly didn’t sell) wooden duck decoys and plastic ferns and other junk people were expected, for some reason, to put on their mantel. He slid his videos toward me, a romantic comedy on top, an action film in the middle, and, of course, something from the
Adult
section hidden beneath.

“Hey, that’s too bad,” he said, shifting weight, anxious for me to ring him up before a neighbor walked in and saw what was lurking below
When Harry Met Sally. . . .

“Actually,” I said, “I’m not going anywhere. I’m gonna stay in town and live in my parents’ garage and write a movie script.”

It had been a
really
long time since I’d won the Young Juniors’ Chess Championship. My mother made me enter. The local papers took pictures of me in the world’s ugliest and lamest suit and tie, and so people thought I was destined to Become Something. What that something might be was more or less negotiable, as long as it involved a bow tie, some chalk, superthick glasses, and lots of published articles in journals no one ever reads. What it definitely was not was my current handle as the Town’s Laziest Register Monkey at the Town’s Only Video Store.

“That’ll be five ninety-eight, due back Wednesday.”

Mr. Lawlor sweaty-palmed me a ten. I gave him change with my Blank-And-Nonjudgmental face (probably my only true clerking skill) and watched as he waddled out to his Volvo (
Spanking Professor 6
safely in the trunk) before driving the hundred yards back to Lawlor’s Duck and Fern Emporium.

Okay, I made that up. That’s not the name of his store. It’s just called Lawlor’s. But the rest is true. I’m trying hard not to exaggerate so much. For some reason, I can’t help myself. My therapist says I have trouble stifling my creativity.

Dr. Felder: “You have trouble stifling your creativity.”

Me: “I have trouble stifling this costs sixty an hour.”

(Picture me lying on a couch. Picture Dr. Felder taking notes. Picture me rolling my eyes.)

“I sense some hostility here, Stan.”

“Yes, I’ve heard that before.”

“You’re too young to be paranoid.”

“Have you ever noticed that the paranoid guy is the only one who ever makes it through the night in the old cabin?”

“The one by the haunted lake in every horror movie.”

“Let’s change gears for a minute.” Dr. Felder sighed. “How’s it coming with the lists?”

You may have noticed by now that I make lists. I can’t help it. Even when I was little I made them, like my parents would come home to find me writing on the wall in orange crayon:

“It’s coming great with the lists.”

“So tell me about rolling your eyes. What are we trying to say there?”

Anyway, the stifling creativity thing is a bunch of crap. Someone creative would’ve already finished their script with Bobby De Niro calling every ten minutes wanting to play the sensitive guy part. The truth is I’m a liar (serial exaggerator) and can’t help it. But I’m trying to stop. I promise.

“Hey, guy!” said a freckle-face kid who leaned his BMX against the
Classics
section, knocking over a picture of Bette Davis. “You got
The Terminator?”

“No,” I lied. It was clear Arnold wasn’t going to do him any good.

The kid rolled his bike out the door and did a wheelie across the parking lot. A gang of other kids caught up to him, and they tore away in a pack.

In the next four hours I had eight customers, rented out three videos, and fielded five questions about college. I tried to work on my script, writing down things like
Guy goes into house. Cut to close-up. Door slams.
Great. Now what? Zombie Lacrosse Team? Ninja Rabbi? Shy Girl That Learns How To Be Beautiful in Time For The Big Dance?

I gave up and just sat behind the register and watched
In a Lonely Place,
my favorite Bogart movie. It’s about a lonely guy who drives too fast and picks up women and punches people who annoy him. Perfect. I also ate potato chips and bent staples into a long chain, which looked like either raccoon DNA or the world’s ugliest necklace. I was trying to decide which when Keith walked in, three hundred and twenty pounds of former football hero.

He wore a ridiculous curly perm and a huge tan sweater that made him look like an offshore island.

He was also my boss. He was large and obviously boozy and more or less useless, but I loved him.

I showed him the staple necklace. I held it up to my neck and smiled like what’s-his-name from Most Recent Boy Band, and in my mind girls screamed and flashbulbs went off and a white limo came roaring up at my side as a nine-foot chauffeur held the door and pushed away groupies and then whisked me over to IHOP for blintzes.

“Hey, that’s beautiful,” Keith said, grabbing the necklace out of my hand and tossing it into the garbage. “I’m deducting the cost of six hundred staples from your paycheck.”

“I get
paid
? I thought this was volunteer.”

The Owner of His Heart by Taylor, Theodora
A Series of Unfortunate Events: The Ersatz Elevator by Lemony Snicket
Swept Away by Susan Kiernan-Lewis
Pleasuring the Lady (The Pleasure Wars) by Michaels, Jess
THE DEAD AMERICAN (The Inspector Samuel Tay Novels Book 3) by Jake Needham
Debra Burroughs - Paradise Valley 04.5 - The Color of Lies by Debra Burroughs
10 Date with Destiny - My Sister the Vampire by Sienna Mercer
Flesh & Blood by John Argus
Covert Craving by Jennifer James
Happy Endings: Finishing the Edges of Your Quilt by Mimi Dietrich
Our partner