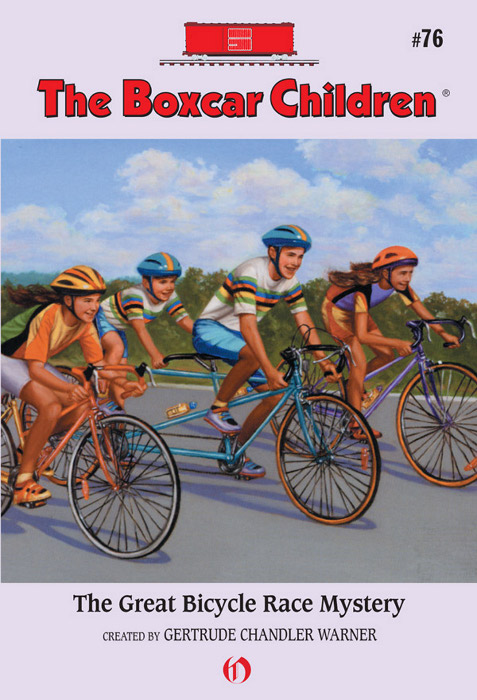 Chapter 1 And Grandfather, Too

Chapter 5 On the Road

CHAPTER 1
And Grandfather, Too

Benny Alden spelled out the letters of the first word on the sign in the front window. He looked up at his oldest sister, Jessie. “Help! That’s what it says, doesn’t it?” he cried. “Is someone in trouble?”

Twelve-year-old Jessie laughed. “Don’t worry Benny,” she told her youngest brother. “No one’s in trouble. From what the sign says, it’s a mountain that needs help.”

“A mountain?” asked Benny, who was six. “How can you help a mountain?”

The four Aldens—Benny, Jessie, Violet, and Henry—had just stopped their bicycles in front of Greenfield Wheels. It was a bicycle shop in their hometown of Greenfield. But they hadn’t ridden their bikes to the shop. They’d walked, because Henry’s bicycle had gotten a flat tire as they were riding into town.

Violet, who was ten, came to Benny’s rescue. “The sign says, ‘Help Save Eagle Mountain. Join the Race to Save the Park. Ask Inside and Thelma Will Tell You How to Sign Up.’ ”

“We can do that while I get a new tube to fix my flat tire,” agreed fourteen-year-old Henry.

Violet held the door open for Henry and his bike, and they all went into the shop.

Inside, bicycles of every kind and color lined both walls: rows of bikes on the floor and rows of bikes hanging from the ceiling on hooks. There were racks displaying wheels and seats and water bottles and helmets and all kinds of bike equipment.

Benny stared. He’d been in the bike shop before, but he always forgot how many bikes it had. As they walked down the narrow aisle at the center of the store, Jessie ran her hand over the cool silver of a handlebar. Violet stopped to admire a purple bicycle. Purple was Violet’s favorite color.

Just as they reached the counter at the back, a voice said, “I’m Louis. What can I do for you?”

Henry looked around. He couldn’t see who had spoken. “I have a flat tire,” he said.

“Ah.” A short, wiry man popped out from around an open door at the back of the narrow space behind the counter. A sign taped to the wall by the door read REPAIR AREA. EMPLOYEES ONLY. The man wiped his grease-stained hands on a rag that hung on a hook below the sign.

He peered over the counter at Henry’s flat tire. “Hmmm,” he said. “Interesting old bike you’ve got there.”

The man nodded. He said, “Okay. Bring it on back. But I have to tell you, I’m not sure a patch will work. That tire is almost worn out. You need a new tire.”

Opening the half door at one end of the counter, the man motioned for Henry to push his bike through.

“We need to know about helping the mountain, too,” Benny spoke up.

“Oh!” said the man. “You want to know about the bike ride. Thelma!” He shouted out the name so suddenly that all the Aldens jumped a little.

A voice shouted back, “Don’t shout! I’m busy. I’m in the middle of a broken spoke.”

“That’s Thelma,” the man said. “Replacing a broken spoke. If she can’t fix your bike, it can’t be fixed.”

“That’s right!” she said, popping into the doorway. She paused to wipe her hands. Unlike Louis, she wasn’t covered in smudges of grease. She was a little taller than Louis, with sandy hair pulled back in a French braid. Tiny silver earrings shaped like bicycles dangled from her ears.

“What’s up?” she asked, stepping aside so Louis could wheel Henry’s bike into the repair area.

“We want to know about the mountain,” Benny said.

“What’s going to happen to the mountain?” asked Violet.

“A
developer
is trying to buy it,” said Thelma, wrinkling her nose as if the word had a bad smell. “Her name is May Whatney and she wants to buy Eagle Mountain, cut down most of the trees, and put in lots of roads and a golf course and a bunch of big houses. The present owner has always let the public hike through his property, but now he needs money and wants to sell Eagle Mountain to the highest bidder. If we can raise enough money, we might be able to convince the state to buy it and turn it into a wilderness park.”

“How will the bike ride help?” Henry asked.

“It’s a three-day ride. It starts at Eagle Mountain and it ends up at the state capitol. We’ll hold a rally on the steps of the capitol building and give the money we’ve raised to the governor,” Thelma said.

“But how does that make money?” Jessie questioned.

“Every rider will have to pay an entry fee and raise at least a dollar a mile for the trip,” Thelma went on. “The riders will ride a certain number of miles each day and camp each night at a camp set up by the volunteers. Tents and food have been donated by different organizations, but all the riders have to provide their own sleeping bag, clothes, and bike.”

“Don’t forget the raffle!” Louis called from the back.

“Right,” said Thelma. “For every five dollars over the minimum amount you raise, you get a raffle ticket with your name on it. At the end of the ride, there will be a drawing and one of the riders will win a custom-made Sergio Spokes titanium racing bike. The only rule is that you have to ride the whole way to be eligible for the raffle.”

Violet nodded, and Benny said, “I want to save the mountain.”

Thelma pulled a stack of papers from a drawer. “Here are the forms. Just fill them out and mail them in with the entry fee. You can hand in the money you raise on the day of the race or you can mail it in, too.”

“That was fast,” said Jessie.

“Practice,” said Louis. He smiled, revealing a chipped front tooth. “I’ll show you how to do it if you sign up for the race. Every bike rider should know how to fix a flat tire.”

The other Aldens laughed. So did Thelma and Louis. “That’s the spirit,” Thelma said. “I can tell that this is going to be a great bike race.”

“Sounds like a terrific idea,” said Grandfather later that night at dinner. “Eagle Mountain is a wonderful place. We used to go hiking there when I was a boy.”

“I want to ride in the race, too,” said Soo Lee. “My dad says I’m an expert rider!” Soo Lee was a cousin of the Aldens. She lived in Greenfield with their uncle Joe and aunt Alice, who’d adopted her.

The Aldens had been orphans, too. They’d lived in an old abandoned boxcar in the woods. That was where they had found their dog, Watch. And that was where their grandfather, who had been searching for his grandchildren, had found them. He’d taken them to live with him in his big old house in Greenfield and put the boxcar behind the house so they could visit it whenever they wanted.

Now Soo Lee was spending the night at her cousins’ house, as she often did. Soo Lee and Violet were good friends, and she was sitting next to Violet at the dinner table. Mrs. McGregor, their housekeeper, had just finished serving them fried chicken, mashed potatoes, and corn on the cob.

“What? Why not?” cried Violet.

“Because it says on the forms that you have to be eighteen to ride, or you have to have an adult ride with you,” Jessie said.

For a moment, everyone was silent.

Then Benny cried, “It’s not fair!”

Henry glanced at Soo Lee. “Maybe we could ask Aunt Alice or Uncle Joe to come with us,” he said.

“Maybe,” said Soo Lee. But she didn’t sound as if she thought they would be able to do it.

But then Grandfather Alden smiled and said, “I’ll go on the bike ride with you.”

Benny was so surprised that he dropped the ear of corn he’d been holding. “You will?” he exclaimed.

“Why not?” said Grandfather. He smiled at Benny. “I haven’t been on a bicycle in a while, but I think I can remember how to ride it. It’s something you never forget.”

“But what will you do for a bike, Grandfather?” asked Jessie.

“I can rent one at Greenfield Wheels,” said Grandfather. “That shouldn’t be any problem.” He glanced around the table. “But you have to do your own fund-raising.”

“We can do that,” said Benny. He picked up his ear of corn and looked over at his grandfather. “You should eat everything on your plate,” Benny told him. “And dessert. You have to get good and strong for the bike ride.”

The next morning, the Aldens began thinking of ways to raise money for the bike ride. They started in the kitchen, right after breakfast.

“Soo Lee and I are going to have a lemonade stand. Mrs. McGregor said she could help us with the lemonade,” said Violet.

“While you are selling lemonade, we can ride our bikes to all the stores and ask for donations,” suggested Benny. “That way, we can practice for the bike ride, too.”

Using a wagon and with Henry, Jessie, and Benny helping, Violet and Soo Lee took the lemonade, a table, two chairs, cups, napkins, and a sign to a busy corner near their house. Watch trotted along behind, and when the table had been set up, he sprawled out in the shade beneath it. 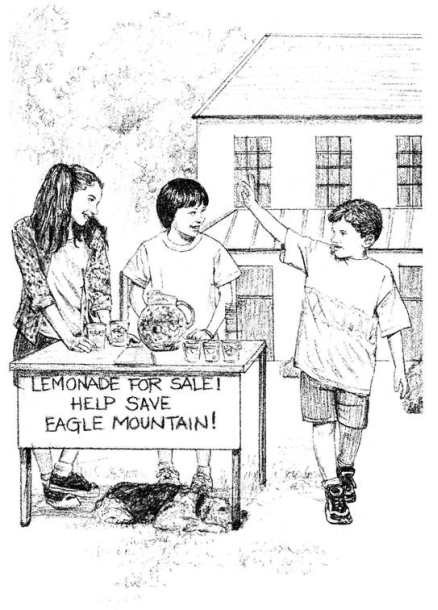 Watch thumped his tail in agreement.

But not everybody was as kind as Sam and Dr. Scott. The owner of the card shop, who was reading a newspaper at the counter when they came in to ask for a donation, listened with a stony face as they told him about Eagle Mountain. Then he raised the newspaper. “See this? This is May Whatney. She’s a good customer and I’m not making a donation to you. That mountain doesn’t need saving from her; it needs saving from people like you who are against progress.”

“May your bikes all have flat tires,” the man said. “Now go.”

“Wow,” said Henry. “That wasn’t any fun. I guess some people have very strong feelings about the Eagle Mountain issue.”

“Let’s go in there,” said Jessie, pointing at the antiques store. “I think Mr. Bellows will make a donation.”

They were right. Will Bellows, like the veterinarian and Sam, had been part of one of the mysteries that the Aldens had solved and was happy to make a donation.

“So, are you going to solve any crimes on this bike ride?” Mr. Bellows asked.

Jessie smiled. “We’ll probably be too busy riding our bikes to think about any mysteries,” she agreed.