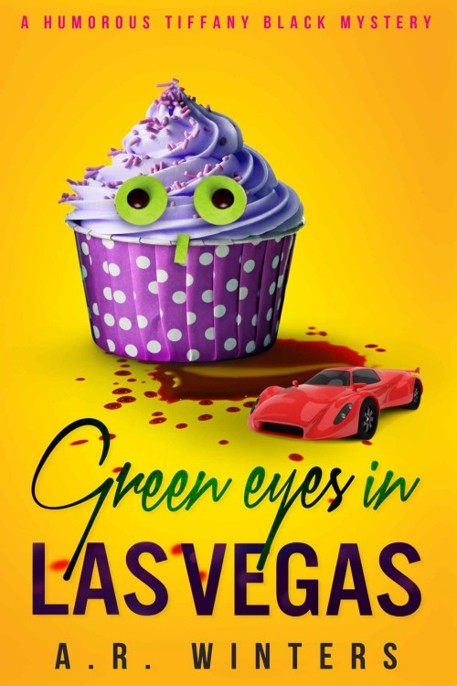 All trademarks mentioned herein are respected.

When cupcake-loving croupier and private investigator Tiffany Black witnesses a handsome, green-eyed man making a getaway after an art heist, she finds her normally chaotic life becoming even more complicated.

Tiffany flits between her two new cases – investigating the missing Van Gogh, and the murder of a Hollywood starlet with a secret life. When her investigation takes an intriguing turn and a man with mesmerising green eyes comes into her life, Tiffany starts to wonder if this man might be the missing link between both crimes.

As she follows the investigation from movie sets to museums, danger strikes a little too close to home when Tiffany discovers that not only was the
murdered starlet being stalked, someone with a deadly motive appears to be watching her too…

I was walking down the street, minding my own business, when the man fell out of the sky.

He landed
lightly on his feet and a parachute drifted to the ground behind him. I watched in silence as he unclipped the billowing fabric, bundled it neatly into a tiny roll that fit under his arm, and noticed me staring at him.

If I’d been thinking straight, I would have screamed.

But it was three o’clock on a Monday morning and I was standing on a deserted Vegas side-street. I’d left the bright, garish lights of the Strip behind me, and this street was as unexciting as it got – a tall apartment complex on one side, and the high, window-less wall of a small-time convention center on the other.

Anyone who reads the papers, watches the news, or is even vaguely aware of how the world works, knows that when a woman meets a strange man in a deserted side-street in the wee hours of the morning, he’s more likely than not to be a thug, rapist, or murderer. Or all three.

But instead of screaming and running away, I stood there, frozen like a Greek statue, my mouth gaping,
mesmerized by the man’s gorgeous green eyes.

Sure, he
was
wearing a black ski-mask that covered the rest of his face. And yeah, he
had
just parachuted out of nowhere, wearing an expensive-looking black business suit, along with the ski-mask and parachute. If I’d been anywhere else, his strange dress-sense would’ve bothered me, but this was Vegas; I figured the man was just taking part in one of those high-adrenaline sports that are all the rage these days.

He winked at me, and I felt my knees turn to jelly. I stared as he turned around and walked up to a red Ferrari
, parked half a block away. The view as he walked away was a feast for hungry eyes, but he reached the car all too quickly, stepped in and drove away.

I stood there by myself,
still rooted to the spot, as the car disappeared over the horizon.

I’ve never been a fan of sappy rom-coms. I’ve always known that love and romance don’t happen in real life the same way they do in the movies, and I’m cynical enough to know that no man could ever be half as perfect and charming and handsome as any of the leads in popular movie
s.

But I still stood there
, on that deserted street, half-expecting Green Eyes to drive back and whisk me away with him. Or, at the very least, drive back and ask for my number.

After a while, when
the street remained empty, common sense revisited me. I headed back home, replaying the events over and over in my mind. The way his eyes twinkled, the way he winked, the way he walked away so suavely.

The man was probably just another visitor to Vegas, someone who’d be on a flight back home in a couple of hours. Most likely, I’d never see him again. But that didn’t stop me from creating a fantasy life for the two of us as I trudged home…

It was almost four when I reached my tiny condo and after a long night of dealing cards to hopeful gamblers, I could barely keep my eyes open.

I dumped my mail on the coffee table, where it joined a growing pile, and glanced at the dying cyclamen that was sitting in a pot on my kitchen windowsill. The place needed a vacuum and the kitchen needed a mop, but that would have to wait.
It also needed some artwork on the walls, decent curtains and a light bulb needed changing – but all those things would have to wait, too. I was exhausted.

I’d purchased my condo with my own meager savings a few months back, thanks to the collapsing Vegas real estate market. The building is run-down, with the Home Owner’s Association unable to raise fees for proper security guards or a fancy pool area, but that suits me fine. It’s within walking distance of the Strip, my friend Glenn lives downstairs, and hopefully I’ll move somewhere nicer as soon as I can afford to.

I was asleep within minutes of my head hitting the pillow, and the next thing I knew, light was streaming in through my bedroom window and my cell phone was buzzing.

I reached out to switch it off,
but relented and groggily answered when I noticed the caller ID, wondering what the hell was going on.

“Hi
, Tiffany!” Emily Sinclair sounded annoyingly alert. “I didn’t wake you up, did I? Wasn’t yesterday your day off?”

I’d just become an accredited
private investigator in the hope of being able to quit my job at the casino, and on my very first case, I’d uncovered the person behind multi-millionaire Ethan Becker’s murder. Although this early success had infused me with more cockiness than I deserved, and some deep-rooted hopefulness, it didn’t mean that clients were lining up around the block to hire me. Yet. I was still crossing my fingers and hoping for the best.

A quick glance at the clock showed me that it was almost twelve, so Emily was probably taking an early lunch break. Her work as an LVMPD detective was pretty stressful and
, although we were reasonably good friends, she wouldn’t be calling in the middle of the day unless there was something important she wanted to talk about.

“I’m sure something’ll come up,” she said. “But right now I’m dying to know – how was the dinner?”

I frowned and rubbed my eyes, and then I remembered. “Right.” I’d completely forgotten to update Emily. “Did Nick tell you anything?”

“I asked him how it went and he shrugged and said something like ‘Mehhrghw
.’”

I laughed. “Yeah, that sums it up. Maybe we’ll stay friends, but it’s not going to be romantic.”

“Bleh.” Emily sounded disappointed and I felt a quick pang of guilt. After all, she was the one who’d set us up, and Nick was her co-worker, so things might be awkward for her. But was it my fault the chemistry wasn’t there?

I smiled to myself. “Actually…”

“What? You’ve met someone else?”

I sighed. “Not quite.” I found myself telling Emily the whole story, ending with Green Eyes’ driving away.

She was silent for a few long seconds after I’d finished my tale, and then she said, “Tiff. You’ve got to come into the station and make a statement.”

I laughed nervously. “So, now it’s a crime to see a man jumping off a building?”

“No. But the street where you saw this guy… It was the little side street just off The Cosmo Hotel, wasn’t it?”

“Yea-eah.” I was awake enough to recognize the heavy feeling in the pit of my stomach.

“I’m pretty sure the guy leaped off Ascend Towers.”

“We just had a burglary report. Someone stole a Van Gogh from the Ascend Towers penthouse.”

I was on hold briefly while Erika transferred me to Detective Elwood, who she said was working the Ascend burglary. While I waited, I remembered my view of the man walking away, and the heavy feeling in my stomach got worse. In addition to the bundled-up parachute under his arm, he’d also had a narrow poster tube slung across his back.

Elwood’s gruff voice startled me and I sputtered, “Uh, huh-hello. This is Tiffany Bl-”

“Yeah. Sinclair says you witnessed something.”

I rolled my eyes. The man had the raspy voice of a two-pack-a-day smoker and the condescending tone of a man who knew everything.

“Yes,” I said. “I saw a man jumping
off a building on Cecil Stree-”

“Did you actually see him jump out?”

“No, I heard a noise behind me and turned around just in time to see him land. He-”

“But you didn’t see him actually jump?”

“Was he behaving suspiciously in any way?”

The man’s interruptions annoyed me, but I thought back to Green Eyes’ behavior. He’d winked at me, but surely that wasn’t too suspicious? Surely an attractive man might want to wink at me. “I guess not.”

“Then what makes you think he’s tied up with the burglary?”

“I don’t – I mean – maybe he’s not.” I didn’t
want
to believe that Green Eyes was involved in anything illegal; I’d much rather think of him as a thrill-seeking urban-sports lover.

“Then why was Sinclair dumb enough to think I’d want to talk to you?”

I felt a flash of loyalty toward Emily, sucked in my breath, and spoke quickly so Elwood couldn’t interrupt me. “He was wearing a ski-mask and carrying a poster tube and a parachute.”

Elwood was silent for a second and then he said, “Come into the station to make the report. Can you make it within the hour?”

“Yeah,” I felt my heart sink. I didn’t really want to talk to Elwood or get involved in this, but I didn’t see how I could say no.

He hung up before I could say anything else, and I cursed myself silently, hoping that Green Eyes wasn’t really involved in anything illegal.