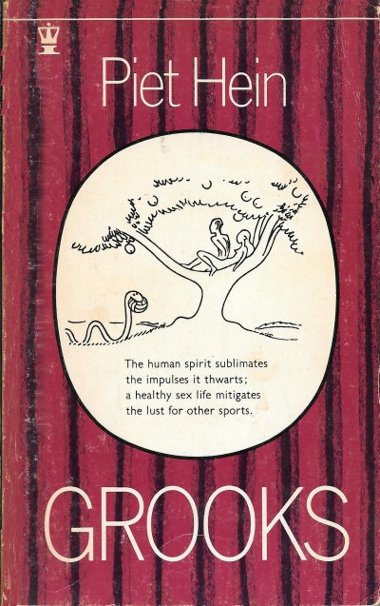 With the assistance of Jens Arup

I first met Piet Hein in charming Copenhagen many years ago. So it is not so surprising to me as it may be to others to find a book of short epigrams in poetic form written in English by a Dane.

Piet Hein is a many-sided man. He began as a scientist. He has been called a poet, a city planner, a mathematician, and a philosopher. In response to a call for help from planners redesigning the central zone of Stockholm he invented a new geometric shape, the ‘super-ellipse’. As if all this were not enough he has devised some splendid table games.

‘Grooks’. Piet Hein told me that he invented the word. ‘Grooks’ is evidently a better name than ‘Illustrated Rhymed Epigrams’ which is what they are. I know little about drawing, and I am Inclined to suspect what is called ‘economy of line’: but I know a good deal about the writing of verse. I have even, though rarely and cautiously, attempted the rhymed epigram, which is a most hazardous enterprise. It must have wit, or wisdom—preferably both—compressed into a tiny space, yet perfectly intelligible. Your obscure ‘modern’ will write no memorable epigrams. Then it must have rhyme and it must scan. All this is formidable enough if you are writing in your own language. It is like (I imagine) being asked to do a graceful dance in corsets and a crinoline. To try it in someone else’s language you must be a hero: to bring it off you must be pretty good. Piet Hein gives himself another restriction—he avoids the long rolling line the master Belloc used:

The accursed rule that rests on privilege

And goes with women, champagne, and bridge:

Broke, and Democracy resumed her reign

Which goes with bridge, and women, and champagne.

To be brave is to behave

Bravely when your heart is faint

So you can be really brave

Only when you really ain’t.

your mind does visit

Naturally, not every card in the pack is an ace, but there are lots of aces: and I am proud to welcome Piet Hein to this part of Anglo-Dania.

by way of an Introduction

When we asked Piet Hein for some facts to constitute a short biography, his reply was to the effect that he didn’t believe in facts, he believed in atmosphere-that details were for people who don’t understand nuances. So we tried to put together an atmospheric biography from his many essays, and the numerous Interviews and articles that have appeared throughout the world.

He started in the field of science, studying and working with things of his own at the Niels Bohr Institute in Copenhagen. But ‘since science has to be misused for one of two things, the university career or technology’ and he felt that he was ‘more of a wild animal than a tame one’, Piet Hein entered the field of invention, based on scientific knowledge, but still writing essays, fables and poems on the side.

For many years he was an acquaintance of Albert Einstein, who, intrigued by Piet Hein’s mathematically based but essentially simple puzzles, spread the word to universities and from there on to the general public. Norbert Wiener, the father of Cybernetics, the science behind electronic brains, wrote his last book
God and Golem, Inc
while staying with Piet Hein in his country house in Rungsted in Denmark, and dedicated the book to him.

Recently Piet Hein was offered the post of general secretary to an international foundation which aimed to gather Nobel Laureates and other eminences from throughout the world and put them in close contact with each other. The post carried an annual salary (tax free) of 50,000 dollars. But Piet Hein remained unshaken-‘I am a composer; I am not a conductor’ were the words he used to get the record straight.

When the Nazis invaded Denmark in 1940, Piet Hein, at that time president of the anti-Nazi union, went underground and Invented the short aphoristic poem, the grook. With its double-edged meanings and its pithy charm, the grook seemed a fine way—possibly the only way—to say the sort of humanistic and democratic things that needed to be said. He was immediately claimed ‘a born classic’, a descendant from the writers of the Old Nordic Havamal poems. He has written over seven thousand of these to date, and has sold half a million copies of his grooks books in Denmark alone, a country with a population of less than 5 million people. Look at this in terms of the English-speaking world and you have a sale that is the equivalent of over 30 million copies.

According to Swedish and Norwegian reviews he is ‘the most quoted Scandinavian’, a kind of unofficial (the institution doesn’t exist) Scandinavian Poet Laureate, and has often been proposed for the Nobel Prize. When Grooks finally came to be published in America they became immensely popular and were hailed in collected form as being ‘a runaway bestseller’ by the New York Times. One of the many people who reacted with great appreciation to the grooks was Charles Chaplin, with whom Piet Hein developed a close understanding.

Piet Hein regards himself as ‘a characteristic specialist’ because he feels he applies the same kind of creative imagination to all the types of work he tackles, thus helping to bridge the artificial chasm between the humanities and the sciences.

He interprets the enormous response to his work not as a tribute to himself so much as a highly encouraging sign that people throughout the world are wide-awake to anything that bridges the gaps in our human universe.

compared to the pain

throwing away the other,

the first one again.

Blue City by Ross Macdonald
All He Really Needs by Emily McKay
Wasted (Dirty Boys of Chicago #1) by Morgan Black
The Secrets She Keeps by Deb Caletti
Summer Secrets by Freethy, Barbara
Amok and Other Stories by Stefan Zweig
Anna's Contract by Deva Long
El caballero inexistente by Italo Calvino
This Perfect Kiss by Christie Ridgway
At Home with Chinese Cuisine by T P Hong
Our partner