Harley Rushes In (Book 2 of the Blue Suede Mysteries) 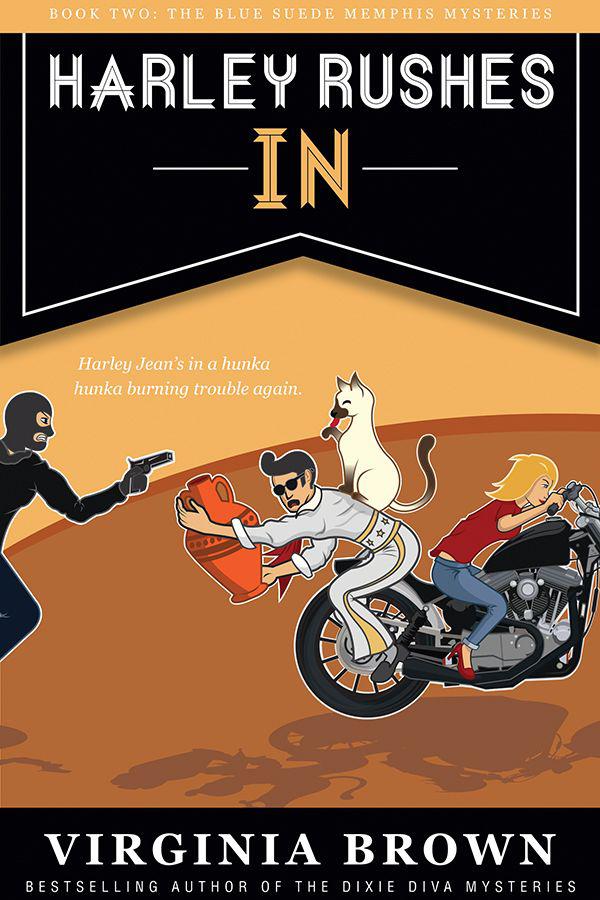 She must be on the right track if someone wanted to kidnap her...

The Novels Of Virginia Brown

She must be on the right track if someone wanted to kidnap her...

Harley made one last trip to the nightclub’s bathroom. One glance in the bathroom mirror was enough to convince her that four beers were past her limit. She looked like something out of Fright Night.

She fumbled with the latch on the stall door, then eased out and felt her way along the tiled wall. She bumped into the sink and ricocheted off the opposite wall. Swearing loudly, she wrenched open the bathroom door and ran right into a solid wall of muscle. A smelly bag was yanked over her head and her arms were pinned in a viselike grip as she was dragged down the hallway and out into the alley.

Whoever had her was trying to force her into a car, and she was just as determined not to go. Somehow, she got her legs up with one foot braced on each side of the open door. She blindly grabbed for a handful of his clothes to pull him off balance. He made a high-pitched sound like a loose fan belt and dropped her. His family jewels were probably missing a few stones by now. She crawled away and stumbled to her feet, ripping the bag from her head to yell for help.

That was when someone smacked her on the side of the head and she saw stars explode in front of her eyes. She hit the ground in the alley hard. Unable to move, she just lay there staring up at the stars.

Then someone bent over her, squeezing her cheeks together and peering into her eyes. “Hey, are you all right? Talk to me, honey. Focus . . . that’s right, both eyes looking in the same direction at once, now.”

A face slowly came into focus. She blinked. Diana Ross? “Why’d you break up the Supremes?”

Diana laughed and said to someone else nearby, “She’s coming around. She’s just not making much sense yet.”

“Trust me, she doesn’t make much sense when she
hasn’t
been hit in the head,” a familiar voice said. “I’ve never met anyone who can’t even go to the bathroom without getting into some kind of trouble.”

That would be Morgan
, Harley thought hazily.
He sounds upset.

The Novels Of Virginia Brown

of Baby and Ranger, two wonderful dogs who left me behind as they went on a great adventure to the next life, where I hope there are plenty of squirrels to chase, biscuits to eat, and sunshine to keep them warm. No longer in my life, but forever in my heart.

And to a temperamental cat that will race from the back of the house to attack me when I sing. Of course, if you heard me sing, you’d probably do the same.

“You da
One
, baby.” Tootsie grinned, then tossed back a strand of his long auburn hair and inspected his newly painted nails with a critical eye. The smell of Raspberry Soufflé nail polish thickened the air of Memphis Tour Tyme offices. “Now you da famous
One
,” he added.

“You mean infamous.” Harley tried and failed to be modest. She rustled the front page of the Sunday edition of the Commercial Appeal, Memphis’s only major newspaper. There it was, in black and white and blurred color:

Local Tour Guide Breaks Jewelry Theft Ring and Helps Crack Murder Case,
read the large headline. The leading sentence in the article said so much less than had really happened:

Harley Jean Davidson, 27, tour guide for Memphis Tour Tyme, had a narrow escape from jewelry thieves Friday night that ended with an arrest on charges of grand larceny, attempted murder, and two counts of murder. Ms. Davidson was instrumental in capturing the suspect . . .

She looked up with a satisfied smile. “I just love it when justice works.”

“Don’t get too excited yet,” Tootsie said as he applied a top coat of clear polish over the bright raspberry color on his nails. “A jury could always set him free.”

Harley frowned. That was daunting.

When Tootsie added, “But at least it’s a good photo of you,” she studied the blurred color of the picture apparently taken as she was leaving the warehouse. Her short blonde hair stuck straight up, her green eyes looked red, the man’s tee shirt she wore hung almost to her knees, and she had an expression on her face like she’d just been hit with a stun gun. She’d been so focused on skipping out, she hadn’t even noticed the reporters or photographers at the crime scene. Just her luck. She sighed.

“I bear a startling resemblance to Billy Idol. My hair looks like porcupine quills. And my mouth is open. I think I’m drooling.”

“A natural look for you, baby.”

“That’s unkind,” Harley said, but all in all, wasn’t totally displeased. The article gave her credit for hunting down dangerous felons, which in a way she had, although after running for her life, it’d certainly seemed more like she was the one being hunted. An unpleasant memory, but not without some residual benefits.

“So,” she said as she handed Tootsie yesterday’s paper, “with all this free publicity for Memphis Tour Tyme, I’ll bet Mister Penney is happy.”

Mr. Penney owned and operated Memphis Tour Tyme, and while rarely seen on a daily basis, frequently made his presence felt. Never in a pleasant way.

“How true. He always looks like a basset hound. Sad brown eyes. Floppy ears—did I say that last out loud?”

Tootsie grinned. “You did. I’m trying to picture a bald basset hound.”

“Spare yourself. It’s not pretty.”

“He wants to see you first thing this morning, you know.”

“Right.” The phone rang, and he punched a button and gave his usual “Good morning, Memphis Tour Tyme, how may I help you?” spiel. After he transferred the call he handed her a stack of pink message slips and said, “The phone’s rung all morning, people wanting you to find their dog or cat, and one even wants you to find her iguana. No lie. A Mrs. Beasley wants you to find a necklace she lost when she was in high school way back in the sixties. Oh yeah, and your aunt Darcy said she has to speak to you as soon as possible.”

“Aunt Darcy?” Harley blinked. Her mother’s younger sister never called her at work or anywhere else. “I can’t believe she called. She never calls.”

“Not everyone is unappreciative of your talents. Your aunt seemed very impressed.”

Harley took the pink slips of paper he held out, amazed and gratified. If even her family was impressed, then all was not lost. It usually took events of gigantic proportions to impress them. After all, her family knew all her flaws with annoying attention to detail, and they could be counted upon to regale complete strangers with youthful foibles that still had the power to make her cringe. Aunt Darcy was not only
not
an exception to that fact, she was the poster celebrity for it.

Tootsie lowered his voice to a dramatic baritone. “And Mike Morgan called. I assume that you’ll be returning his call first.”