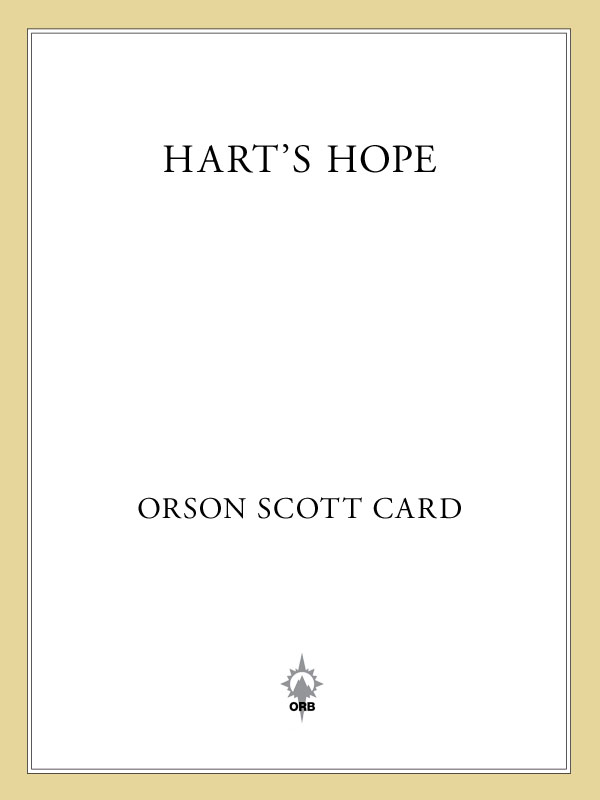 Copyright infringement is against the law. If you believe the copy of this e-book you are reading infringes on the author's copyright, please notify the publisher at:
us.macmillanusa.com/piracy
.

TO MARK PARK,
WHO KNOWS THE LITTLE KING
FROM THE HEART OUT

1: Palicrovol Becomes a King in His Heart

2: The Girl Who Rode the Hart

3: The Descent of Beauty

7: The Birth of Palicrovol's Son

9: The Man with Golden Eyes

18: The Dance of Descent

23: The Freeing of the Gods

25: The Victory of the Hundred Horns

O Palicrovol, with death and vengeance in your eyes, I write to you because over the centuries there are tales you have forgotten, and tales you never knew. I will tell you all the tales, and because my tales are true, you will withhold your blade-filled hand, and no longer seek the death of the boy Orem, called Scanthips, called Banningside, called the Little King.

This is not the earliest of the tales, but it is the first that I must tell, because if you remember this, you will hear me to the end.

He came to her in the garden, where her women were draping her with flowers, which they must do every day of the spring. “What is the name of the girl?” he asked.

Her women looked to her for permission to answer. She nodded at sharp-tongued Cold-in-the-Western-Waters, who would know the proper words to say.

“Our lady will know the name of this man who walks boldly in the holy garden, and risks knowing all the secrets that only eunuchs know.”

The man looked slightly surprised. “But I was told I might walk anywhere in the city.”

Again the women looked to her, and this time she chose Bent-Back-from-Birth, whose voice was high and strange.

“You may walk where a man may walk, but you must pay what a man must pay.”

To her surprise, the man did not look afraid. By his fearlessness he was a fool. By his clumsy accent he was a foreigner. By his presence in the holy garden, he was new to Isle-Where-Winter-Is-But-One-Day-in-the-Mountains. But above all, by his face he was strong and beautiful and good, and so she nodded to Born-among-Falling-Lilac-Petals.

“You are in the presence of the eldest child of King Over-the-Sea-on-a-Swan's-Back,” said Mesmisfedilain in her most velvet voice.

At once the stranger dropped to his knees and bowed his head, but he did not bend his back. This was remarkable. She nodded to Truth-without-Torture.

“If you are a king in your own land, Man, why do you kneel? And if you are not a king, why does your unbent back pray for your death?”

“I am Palicrovol,” said the man. “I am one battle away from death or a throne. My enemy is Nasilee, who rules by right of blood in Burland.”

Truth-without-Torture took the challenge of his words. “If he rules by right of blood, how do you dare oppose him? Answer truthfully, for your life is in your tongue.”

“Because I am a good man,” answered Palicrovol, “and Nasilee is one of those who rule by right of blood, but earn the hate of all good men. Still, I would not have rebelled if the gods had not chosen me.”

“If the gods have chosen you, then why are you an exile here in Isle-Where-Winter-Is-But-One-Day-in-the-Mountains?”

Palicrovol leapt suddenly to his feet. For a moment the girl was afraid that he meant to harm her, and even more afraid that perhaps he meant to flee. But instead he flung out his arms and half-chanted the tale of the battle. In her language the words were clumsy, but she soon realized that the awkwardness was because he was translating from poetry. You know the poem. He told her that he stood on a hilltop late in the evening before the battle, the campfires of the largest armies ever brought to war in Burland spread out before him, and he saw that whether he won or lost, too many men would die. There would not be army enough left to defend the borders against the raiders from the inland mountains, or the coasts against the raiders from the sea. So he told his great general Zymas to break the army into pieces and send them into hiding before morning. Let all men think that Palicrovol is a coward, and then Palicrovol will come and win his battle when the cost is little and the prize is greater. In those days, Palicrovol was wise.

And she smiled at him, for he was a fit king.

“With my lifelong accoutrements intact?”

The women giggled, but
she
did not laugh. She only nodded, gravely, once again.

“Then may I risk my life again, and tell you that you are only a child, and yet I have never seen such perfect beauty in all my life.”

“Of course she is beautiful, Almost-King-of-Burland. She is the Flower Princess.”

“No,” he said. “I do not speak of her perfect face or the flowers that look harsh beside her perfect skin or the way her hair looks deep as a new-plowed field in the sunlight. I say she has the perfect beauty of a woman who will never tell a lie in all her life.”

He could not have known, unless a god told him, that she had taken that most terrible of all vows when she was given to the sea at the age of five. She was bound to the truth, and though she had said not a word to him, though not even the Sea Mothers knew of her vow, he had looked at her and seen it.

“She is not a woman,” said Born-among-Falling-Lilac-Petals. “She is only eleven years old.”

“I will marry you,” said Palicrovol. “When you are twenty years old, if I am King of Burland I will send for you and you will come to me, for I am the only king in all the world who can bear the beauty of a wife who will not lie.”

She stood then, letting the flowers fall where they would, ignoring the gasps of her women. She reached out and touched his wrist, where he opened his hand to her. “Palicrovol, I will marry you then whether you are King or not.”

Palicrovol answered, “My lady, if I am not King by then, I will be dead.”

“I do not believe that you will ever die,” she said.

Then her women wept, for she had now betrothed herself, and it could not be undone however her father might grieve or rage at her choice.

But Palicrovol cared nothing for their keening. “My lady,” he said, “I do not even known your name.”

She nodded to Bent-Back-from-Birth. She could not say her own name, for in those days her name was not true.

Palicrovol repeated the name softly, looking at her lips. “Enziquelvinisensee Evelvenin,” he said. She listened joyfully, for with his love she was sure that someday those words would be true, though she feared the path that would lead her to her name. “I will send for you,” he said, “and you will be worth more to me than the Antler Crown.”

He went away, and the Flower Princess waited for him. In all her life she has never regretted her betrothal, nor grudged the terrible price she paid for him, nor lied to Palicrovol, even when you wished her to lie, even when you commanded her, so cruelly, not to speak.

Make Me Lose Control by Christie Ridgway
The Fires of Atlantis (Purge of Babylon, Book 4) by Sam Sisavath
As Red as Blood (The Snow White Trilogy) by Salla Simukka
Because of His Name by Kelly Favor
The Secret Knowledge by David Mamet
Heaven Bent by Robert T. Jeschonek
Trouble With the Truth (9781476793498) by Robinson, Edna
A Perfect Square by Vannetta Chapman
010 Buried Secrets by Carolyn Keene
Bad Boy's Baby by Frost, Sosie
Our partner