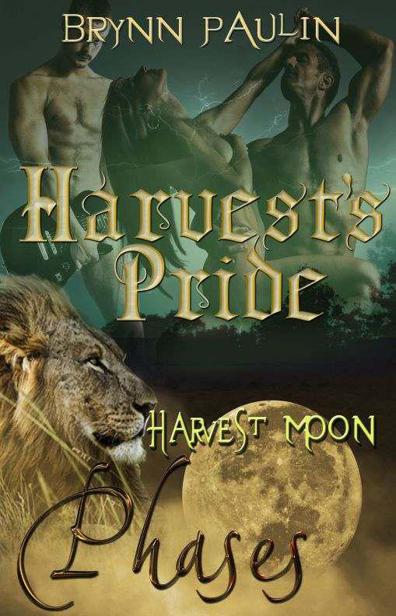 Hanna Herst stood in the shadows of the near empty auditorium and watched two of the most desirable men in the world perform their music. She wasn’t the one declaring that, though she agreed it was true. Tabloids were in accord on this—the front men of
Harvest
were H.O.T. Hot.

The area just in front of the stage was teeming with reporters and photographers vying for their chance at a bite out of the duo and their new look for this tour. Their once long, golden blond hair was closely shorn and their lean bodies were even more ripped than the last time they’d publically appeared. Frankly, the pair made her mouth water and the rest of her warm and melty, though she preferred them with the longer locks.

Kazimir and Demyan Pycnahvich Ruslan were the American-born children of two Russian immigrants. Kaz and Myan. They were exotic and had captured the avid adoration of fans since they’d entered the scene some eight years ago. Yet, for all the fascination, no one really knew much about them—not more than they allowed. Hence, the circus up front. Every one wanted a piece of the twin gods.

Was she the only one who noticed they pandered to the press, giving them boatloads of face time but nothing substantial? No one really knew about the twins’ lives. And she wanted to know. She wanted inside, because she was confident this pair had something to do with her sister’s disappearance. At very least, she was sure they knew something.

Hanna had been on the fast track up the media food chain when Melanie had disappeared. Mel had worked as one of
Harvest’s
roadies. Every communication had been rife with Kaz this or Myan that or gushing about whatever big city the tour was playing. Then suddenly last year, they’d all stopped. As far as Hanna could tell, Mel had disappeared somewhere between St. Louis and Des Moines. Inquiries had turned up nothing. The band claimed Mel had just left the tour. Hanna didn’t believe it. Even more, she couldn’t believe that the police had closed the case. It was untenable! A woman—her
sister
—was missing and no one seemed to care!

Determined to find out what had happened to Mel, Hanna had stepped away from her job as a political journalist and, stunning everyone, commenced entertainment reporting. It had taken her too long, but finally, fate had positioned her to get some answers.

Her magazine had gotten her a coup. She would be allowed to travel with
Harvest
for the next week. They were letting her inside the fold, and she’d get to see what they hid from the rest of the world. She wouldn’t just be behind the scenes of the band. She’d actually travel with Kaz and Myan.

Despite herself, the opportunity excited her. The reporter inside her wanted to see how they lived even if she didn’t like them—but she did grudgingly like them. They made her hot even when her brain screamed no. This wasn’t right. They knew something. She wanted to know their secrets for Mel’s sake and for the sake of her sidetracked career. This would be the exposé of this generation—the fall of these fake idols. Her hormones be damned.

“She’s here,” Kaz muttered under his breath to his brother as they headed backstage, the rest of their band following them while the group’s publicist handled the media circus.

“You think it’s been easy for her to maneuver into this position? Subterfuge takes planning.” Kaz grinned and looked toward Hanna. The shadows backstage hid him from her, while his feline sight cut through the darkness giving him a clear view of her. Notebook in hand, she was staring in his direction while chewing on the end of her pen. Thinking about her “article” or how to pin a nonexistent crime on them? A good question.

He knew she was worried about her sister, but if she’d come directly to them, her fears and all this hassle could have been avoided.

Kaz took a deep breath. Even through the scents of all the others in the building, he could smell her…his mate. He glanced at his brother.
Their
mate. He and Myan had been waiting for her since they’d matured. When they’d met her sister, Melanie, they’d known she somehow knew their destined partner…and then a letter from Hanna had arrived.

He’d nearly lost control and shifted in front of everyone. The other band members were part of his pride, but the crew…not so much. They would have been pretty freaked out to see a full-grown, three-hundred pound African lion in their midst. Then Myan would have felt the need to shift to protect him. It would have been chaos.

But with one whiff, all reason had shot out the door as his blood had drained to his cock. That part of him was filling once more as he scented her now. She was his mate, and he wanted her immediately. Even through the shadows, he could see her honey-brown hair gleaming and her grass-green eyes.

Since the band had left the stage, the lights went up, and he saw the sprinkling of freckles across her alabaster skin. He growled at the sight of her lean frame—thin yet curved perfectly in all the right places. A male reporter was pressing too close to her and everything in Kaz wanted to bound across the space separating them and slash at the man. No one would touch their mate.

“Down, boy,” Myan ground out, his hand on Kaz’s arm and his voice a bit shaky as he obviously fought to keep himself in check. “Let’s go call Melanie and let her know her sister’s here.”

Kaz turned to a man standing nearby, their manager and cousin, Alexi. “Go get her and bring her to us.” Then he turned to his brother. “Let’s go.”

He had to go before either of them did anything stupid. He could sense the urgency flowing through his twin. Myan, usually the more levelheaded of the pair, was ready to pounce as well. That phone call needed to happen now, as did the final arrangements for their transportation after the show.

Hanna had no idea, but their next stop wasn’t on the concert schedule. It was their compound in Northern Michigan.

Hanna looked up to see a muscular tawny-haired man in a white button-down shirt standing a couple feet from her. His head bowed and his fist pressed to the middle of his chest. After a moment, he raised his head and whisky-colored eyes devoured her.

“Kaz and Myan have asked me to bring you backstage,” he said. “I’m Alexi Ruslan, their assistant.”

She tilted her head. “Ruslan?”

He nodded with a small smile. “Their cousin. Will you follow me?”

“Uh, sure,” she said, a little taken aback by his formality.

He glanced behind her then his brow furrowed. “You have luggage somewhere?”

“I left it at the hotel with the concierge. I have to pick it up later to take to my room.”

He nodded. “I’ll see that it’s attended to so you needn’t worry about it. It will be in your room waiting for you, later.”

With that, Alexi turned and led her toward the security personnel manning the entrance to the backstage area. The men looked stunningly close to Alexi’s appearance. Both bowed their heads at her then stepped aside. After she and Alexi had passed, Alexi opened the zippered notebook he carried and pulled out a lanyard holding a plastic credentials pass.

“This will get you anywhere backstage—not that you’d have much trouble. The security staff will all recognize you, but the crew might not, so you should always wear it.” Tucking the notebook beneath his arm, he stepped close then slid the pass over her head. His eyes closed and he took a deep breath as he settled it around her neck, but the moment passed before she could freak out. Was she imagining things? Maybe he was tired. Maybe he was sighing because he was stuck on press detail. Maybe she was oversensitive.

He tilted his head to indicate a nearby hallway. “Kaz and Myan are waiting.”

Without another word, he led her into the hallway with greenish-white industrial lighting. This venue had spared no expense for comfort. She would have thought they’d treat the music royalty playing their arena far better than this. Mentally, she made a note for her article. She’d have to note how the brothers felt about the lack of frills.

The door Alexi opened revealed a much brighter room. It was almost golden in comparison to the gloomy hallway. And inside stood the two men she’d come to see. Immediately, her womb clenched and cream flowed into her pussy. Man, she was a mess.
Remember Mel,
she told herself as her heart beat faster, and she felt heat rush through her.

Beside her, Alexi groaned and she shot him a questioning glance, only to find him disappearing back through the door that slammed behind him as he went.

“Hanna,” Kaz said, taking her hand, his voice a velvety rumble as he spoke. The utterance made her shudder as the sensuous sound rolled over her.

Myan took her other hand, his callused fingers stroking her palm. “We’re so pleased you’re here,” he murmured.

Her pussy was clenching so hard, it amazed her that she didn’t come. What the hell was wrong with her? She’d been around hundreds of celebrities before today. She’d never been star struck—it was one of the things that made her so good at her job—yet here she was almost orgasmic at this pair.

“You feel it too,” Myan observed with a smile.

“Feel what?” she whispered, trying to gather herself and be professional.

“The desire,” Kaz said, flipping the lock on the door. She spun, pulling her hands free from Myan’s grasp. How had Myan gotten to clasp both? How did Kaz get behind her? How had she gotten trapped between them?

Kaz leaned against the door, and she backed away from the feral lust in his eyes. She slammed right into Myan’s chest. His arms locked around her before she could jolt away.

“No you don’t,” she bit out, struggling for freedom.

“Yes, we do,” Kaz replied. He stepped close and cupped her cheek. “We’ve been waiting for you, and so has Melanie.”

His head lowered as she gasped, and his lips covered hers, capturing the sound.

Is You Okay? by GloZell Green
Seeing is Believing by Erin McCarthy
To Trap A Temptress (Southern Sanctuary - Book 2) by Cousins, Jane
Havoc - v4 by Jack Du Brul
Illicit Desire: Outlawed Realm, Book 2 by Tina Donahua
No Way Out by Samantha Hayes
Enid Blyton by The Folk of the Faraway Tree
Cade Creek 11 - Race Against Time by Glenn Stormy
Rush by Eve Silver
A Game of Thrones by George R. R. Martin
Our partner