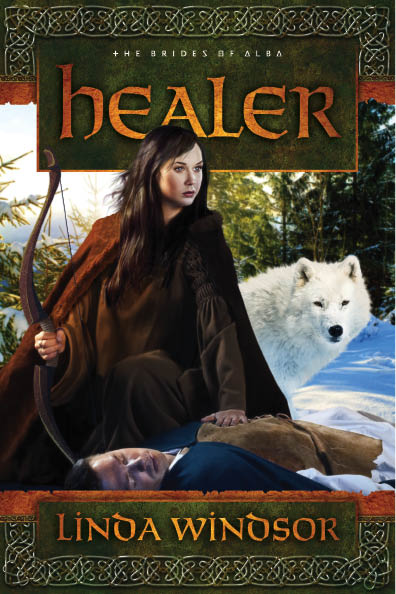 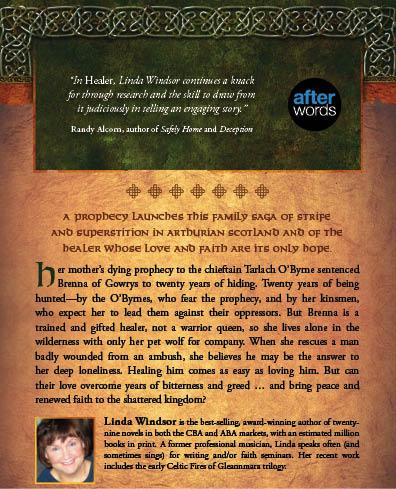 What people are saying about …

“In
Healer
, Linda Windsor combines a knack for thorough research and the skill to draw from it judiciously in telling an engaging story. She weaves together a rich and detailed tapestry of sixth-century life in Scotland. Her notes about Arthurian characters, the Grail Palace, and the bibliography are well worth reading. Linda has done her homework and written a fine story.”

“As a longtime, unabashed fan of Linda Windsor’s novels, I have been waiting and hoping for a new medieval book from her for several years. Not only did
Healer
not disappoint, it exceeded my expectations. A beautiful, heart-pounding love story set firmly against a backdrop of clan fighting and supernatural warfare kept me glued to this book. The next book in this series cannot come soon enough!”

“One of the best historical novels I’ve read in years. Windsor painted a picture that allowed me to journey through sixth-century Scotland—to laugh, to cry, to shout victory, and to praise God for watching over His own. Exquisitely written. Never-to-be-forgotten characters woven with a plot that touches the world we live in today.”

DiAnn Mills,
author of
A Woman Called Sage
and
Sworn to Protect

“With the first book in her Brides of Alba trilogy, Linda Windsor beautifully melds Arthurian legend with early Christianity in an unforgettable story of forgiveness and reconciliation that captivated me at the first page and became my constant companion until the last. I impatiently await the next two books.”

“Windsor weaves together a rich tapestry of intrigue, love, and faith set in Arthurian Scotland. With her beautiful prose she transports you into Brenna and Ronan’s world, a place where hope and light overcome despair and darkness. Prepare to be swept away by
Healer
.”

Kathleen Fuller,
best-selling author of the Hearts of Middlefield series

“Linda Windsor’s
Healer
takes us back to a little-known time. Rich in historical atmosphere, memorable characters, deep emotion, and the triumph of faith—what more could a reader want?”

“This is a beautiful story, full of mystery, romance, and—most of all—redemption. Linda Windsor has written a breathtaking saga combining history and faith with imagination to create a page-turning tale that lingers long after the final paragraph. I can hardly wait for the next book!”

Other Books
by Linda Windsor

The Brides of Alba Trilogy

It Had To Be You 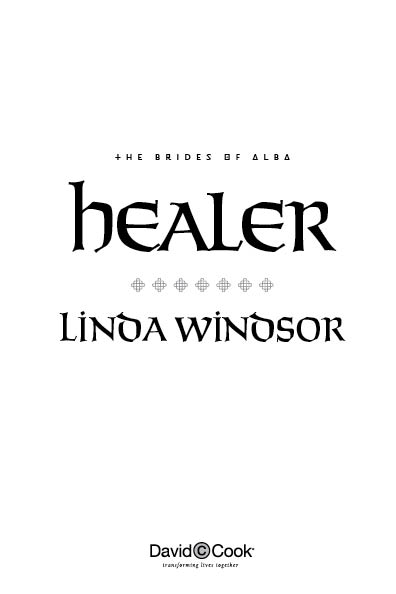 All rights reserved. Except for brief excerpts for review purposes,

without written permission from the publisher.

This story is a work of fiction. All characters and events are the product of the author’s imagination. Any resemblance to any person, living or dead, is coincidental.

To my mom and children,
for their support and sacrifices to allow me time to research and write this novel.

My son Jeff’s by-the-Good-Book faith helped keep me grounded,
while my daughter, Kelly, challenged me to find ways to fish for men
who would not heed Scripture from the other side of the boat.

To David C. Cook,
for giving me the wings to fly with this project.

And finally, to my Heavenly Father,
the Great Creator who would not let me be until I wrote of the things He placed on my heart. Thank You, Jesus, for Your love and grace.

Many of you are aware of my passion for historical research. When a friend forwarded me a magazine article about what happened to the Davidic line after the nation of Israel scattered (1 and 2 Kings), I became intrigued by the possibilities. So I started a three-year journey of earnest research that birthed this new series.

With the Brides of Alba series, I am once again stepping into the Dark Ages and surely controversial histories and traditions. It is set in the late sixth-century Scotland of Arthur, prince of Dalraida—the only historically documented Arthur. Most scholarly sources point to Arthur, Merlin, and even Guinevere/Gwenhyfar as titles, so it’s easy to see why the Age of Arthur lasted over one hundred years. There was more than one Arthur. The Dark Ages become even darker when you consider that there was no standard for dating and even the records that exist are written in at least four different languages. Neither names, dates, place names, nor translations are completely reliable. So I quote eighth-century historian Nenius: “I have made a heap of all I could find.”

The Prince Arthur of
Healer,
like his historical forefathers, had claim to the royal bloodline of David and that of the apostolic priestly line from the first-century family and friends of Jesus according to multiple sources. A few are listed in the Bibliography (see “Bibliography”). Because my hero and heroine are of similar heritage, they are greatly affected by the rules and traditions of these sacred lines. Just how they were affected, came from the Arthurian scholars’ works highlighted in the booklist, Chadwick in particular. From these books come an Arthur and a Scotland/Britain that is unique to history, tradition, lore, and the Christian faith. (See “Arthurian Characters” and “The Grail Palace” for more.)

If figuring out who was who wasn’t hard enough, I also tackled the task of showing our fledgling early church and faith struggle in this time before science evolved from what was known as
nature magic
—and from where nature magic was often supplemented or replaced by miracle or dark magic. It is the last two that involve the supernatural—divine miracle or demonic magic.
Nature magic
(protoscience) was the knowledge and use of the properties of God’s wonderful creation, a knowledge practiced by my Christian heroine and accompanied by God. But sometimes it was used for evil and accompanied by dark magic. I can tell you that the research of some elements needed for the story left me unsettled and clinging to God’s shirttail and Scripture for discernment.

I found myself reading and rereading the verses below as I worked on this novel and endeavored to show the difference between Christians and nonbelievers, as well as between the Christian Celtic or druidic priests, the Roman priests, and the nonbelieving druids. (Bear in mind that
druid
in that time was a word for all professionals—doctors, judges, poets, teachers, and protoscientists as well as priests.
Druid
meant “teacher, rabbi, magi, or master,” not the dark, hooded stereotype assumed by many today.)

With regard to nature magic as well as the power of the Holy Spirit in the believer, I gravitated in my work to these verses:

I am the vine, ye are the branches: He that abideth in me, and I in him, the same bringeth forth much fruit: for without me ye can do nothing.—John 15:5

Many of you know how my daughter was stalked and assaulted in college, how she blamed and turned against God and became involved in Wicca, or white witchcraft. It was through research for another Dark Age series, the Fires of Gleannmara,
that I learned by God’s grace to witness to her effectively when she would not hear anything from the Word
.
I have included even more on this kind of research in
Healer
, Book One of the Brides of Alba
series
.

To reach my daughter, I had to
fish
from the other side of the boat. This was revealed to me once when I read the story of how the disciples had fished all night with no success. Then Jesus told them to try the other side of the vessel. They did and netted a boatload. My child would not listen to Scripture, but she was all ears for the history and oral traditions of the era that became the origins of many of today’s New Age beliefs.

These historical and oral traditions underscored or clarified what Scripture revealed, separating the wheat from the chaff. They distinguish between works done for the glory of God, praising Him for creation and its properties (or use of nature magic, or protoscience), and those done for self-edification and/or to harm others. They reveal how most druids knew who Christ was—the Son and Messiah ordained by the Creator—because their forefathers had recorded the astrological phenomena of His birth star and the darkness after His death (see www.BethlehemStar.com to see how NASA technology and accepted history are used to affirm this). And they define the line between the light use of nature magic, often aided by the Holy Spirit, and the dark use of the same knowledge, aided by demons.

The results of my
fishing
were not as instant as that of the disciples. It took a journey of eight years before my daughter was ready to jump into the boat. But the net had been cast and repeatedly
mended
each time I found something new to share, something that built on common ground and carried her one step closer to Christ. Both mother and daughter emerged stronger from that storm—stronger in faith, friendship, and love. I share this story because maybe someone out there needs to know how to approach a beloved nonbeliever who will not hear Scripture or traditional witness … but must be reached from the other side of the boat.

This is my passion. To reach out and enable others to reach out effectively to those who are swimming on the other side of the boat from the written Word with a net that will bring them to Christ, the Living Word.

With all my heart,

Crazy for Cowboy by Roxy Boroughs
Nothing but the Truth by Jarkko Sipila
Mrs, Presumed Dead by Simon Brett
Danger on Parade by Carolyn Keene
What Remains_Reckoning by Kris Norris
Devils Comfort MC by Brair Lake
Forged In Flame (In Her Name: The First Empress, Book 2) by Hicks, Michael R.
An Amish Country Christmas by Hubbard, Charlotte; King, Naomi
Broker, Trader, Lawyer, Spy by Eamon Javers
Bad Blood by Evans, Geraldine
Our partner