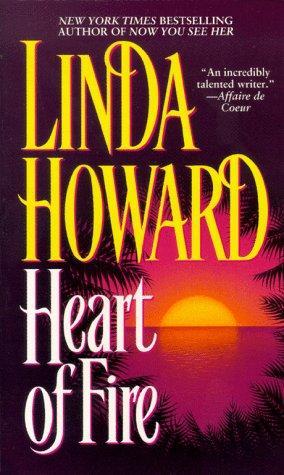 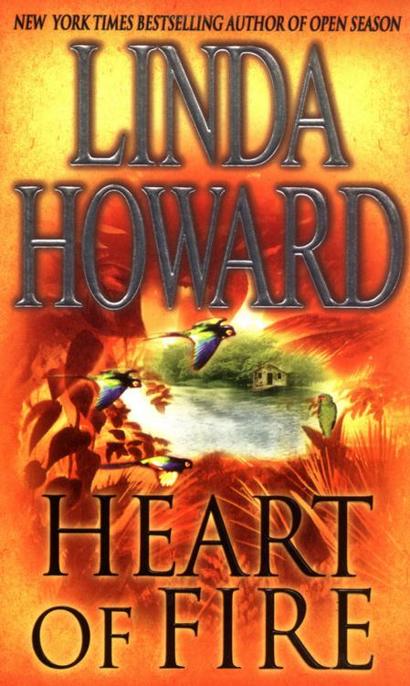 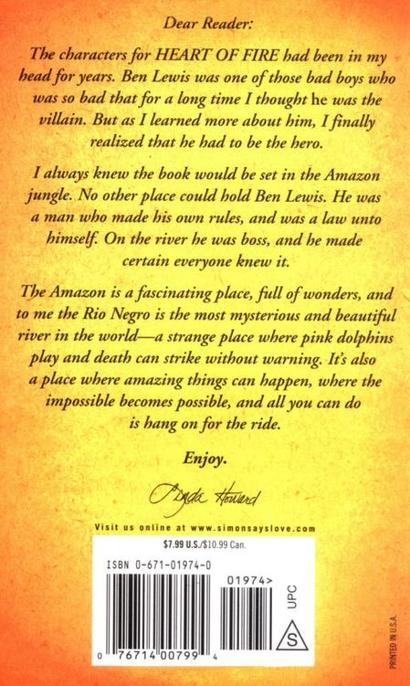 His voice was low and steely. "What's between us won't just go away."

She faced him, seeing the force of his arousal in the hard, taut planes of his face. "I don't have to hold you off forever," she said, a little sadly. "Just until we get back to Manaus. Then I'll be out of your life and it won't matter anymore."

He gave a short bark of laughter, a sound totally without humor. "Getting back to Manaus won't keep you safe from me, sweetheart. You're mine, and you're going to admit it no matter how long I have to keep after you."

To her surprise, his hands were gentle as he knelt by her and brushed out her hair, then caught it up in her usual ponytail. He ended by kissing the nape of her neck.

He knocked her a bit off-balance with the sweetness of his care. She didn't want him to be sweet, she wanted him to be the Ben Lewis she was accustomed to: shameless, raunchy, and reckless. Brave, too, she mentally added, to give the devil his due. Intimidatingly capable. Dangerous. Ruthless.

For the first time, she wondered if she had a prayer of resisting him. She was doing something so stupid she could barely believe it of herself. She was falling in love with him…

"Linda Howard writes such beautiful love stories. Her characters are always so compelling… She never disappoints."

—Julie Garwood
Books by Linda Howard
A Lady of the West
Angel Creek
The Touch of Fire
Heart of Fire
Published by POCKET BOOKS
LINDA
HOWARD
HEART OF
FIRE
POCKET STAR BOOKS
New York London Toronto Sydney Tokyo Singapore
This book is a work of fiction. Names, characters, places, and incidents are either products of the author's imagination or are used fictitiously. Any resemblance to actual events or locales or persons, living or dead, is entirely coincidental.
An
Original
Publication of POCKET BOOKS
A Pocket Star Book published by
POCKET BOOKS, a division of Simon & Schuster Inc.
Avenue of the Americas, New York, NY
Copyright © 1993 by Linda Howington
ISBN: 0-671-72859-
First Pocket Books printing July
POCKET STAR BOOKS and colophon are registered trademarks of Simon & Schuster Inc.
Cover art by Yuan Lee
Printed in the U.S.A.
Prologue
Top
Next

"Who's that, Daddy?" Jillian's small finger poked insistently at a picture in the book her father held. She was ensconced on his lap, as she often was, for even though she was only five years old she was fascinated by his tales of long-ago people and faraway places, and had been since she was a toddler.

"What's her name?" Jillian knew the figure was female because of the way it was shaped. When she was real little she had sometimes been confused by the length of the hair, until she realized that almost everyone in Daddy's picture books had long hair, boys as well as girls. In search of a better means of gender identification, she had soon discovered a much more dependable clue: chests. Men and women had different chests.

"I don't know her name. No one knows if she ever truly lived."

"So she may be a pretend person?"

"Maybe." Cyrus Sherwood gently stroked his daughter's small round head, lifting her thick, shiny hair and letting the dark strands drift down to fall once more into place. He delighted in this child. He knew he was biased, but her understanding and her grasp of the abstract were far beyond what was normal for her age. She was fascinated by his books on archaeology; one of his favorite memories was of her, at the age of three, tugging on a book that weighed almost as much as she did, wrestling it to the floor, and then spending an entire afternoon lying on her stomach, slowly turning the pages as she pored over the pictures, utterly oblivious to everything else around her. She combined childhood innocence with a startling logic; no one would ever accuse his Jilly of being muddleheaded. And if her primary personality trait was pragmatism, her second was stubbornness. He fondly suspected that his beloved daughter would turn out to be more than a handful for some unsuspecting man in her future.

Jillian leaned closer to study the picture in greater detail. Finally she asked, "If she's a pretend person, why is she in here?"

"The Amazons are classified as mythical figures." "Oh. Those people that writers make up stories about." "Yes, because sometimes myths can be based on fact." He usually tried to simplify his vocabulary when he was talking to Jillian, but he never talked down to her. If she didn't understand something, his fierce little darling would demand explanations from him until she
did
understand.

Her little nose wrinkled. "Tell me about these Amazings." She settled back in his lap, making herself comfortable.

He chuckled at her accidental but on-target pun, then launched into an account of the warrior women and their queen, Penthesilea. A door slammed somewhere in the house, but neither of them paid attention, caught up in the old world that was their favorite playground.

Rick Sherwood bounded into the house with unusual enthusiasm, his customary sullenness lost in excitement. The cleats on his baseball shoes made a strange metallic sound against the wooden floors as he ignored the housekeeper's oft-repeated demand to take the shoes off before coming inside. God, what a game! It was the best game he'd ever played. He wished his dad had been there to see him, but he'd had some student appointments and couldn't make it.

Up to bat five times, and he'd had four hits, one of them a home run. That made his batting average for the day a stupendous .800! Math wasn't his strong point, but he could figure
that
batting average easily enough.

He stopped in the kitchen to down a glass of water, gulping it so thirstily that rivulets ran down his chin, then ran another glass. As he brought it to his mouth he heard voices and paused. It sounded like his dad.

Still impelled by excitement, he clumped rapidly toward the library, where he knew his dad would be. He burst the door open and rushed through. "Hey, Dad! I got four hits today, one of them a home run! I had seven RBIs and made a double play. You shoulda been there!" The last was said on a burst of excitement, not as a complaint.

Professor Sherwood glanced up from the book and smiled at his son. "I wish I had been. Good boy!"

Rick ignored his little sister, perched on their father's lap. "Your student appointments didn't take as long as you thought, huh?"

"They were postponed until tomorrow," the professor said.

Rick stood there, his excitement fading. "Then why didn't you come to the game?"

Jillian had been listening with interest, and now she said, "I like baseball games, Daddy."

He smiled down at her. "Do you, Jillian? Perhaps we'll go to the next one."

She was satisfied with that, and her story had been interrupted long enough. She poked at the book to redirect his attention. "Amazings," she prompted.

Obediently the professor responded to the demand in that piping voice, something easy to do when the story was so close to his own heart. Thank heaven Jillian preferred myth to fairy tale, or he couldn't have been nearly so patient.

Rick's happiness died, to be replaced by fury as he found himself once again shut out by that brat. Okay, so she was smart; so what? She couldn't handle a double play. Frustration welled up inside him, and he stalked out before he gave in to the urge to grab her out of their father's lap. The professor wouldn't understand; he thought the little darling was wonderful.

Little darling, my ass, Rick thought viciously. He'd disliked and resented Jillian from the moment she was born, just as he had disliked her mother. Her mother had died a couple of years ago, thank God, but the brat was still here.

Everybody made a fuss over her because she was smart. They treated him like some dummy just because he'd been left back a grade in school. Okay, so he was seventeen, and would turn eighteen just after starting his junior year in high school; he wasn't
stupid
, he just hadn't tried real hard. Why bother? No matter how good he did, people still gave the brat all of their attention.

He went upstairs to his room, where he pulled off his baseball shoes and hurled them against the wall. Now she'd even ruined the best game he'd ever had. If Dad's student appointments had been postponed, he could have come to the ball game after all, but instead he'd come home to tell stories to that little brat. The injustice of it made Rick want to hit something. He wanted to hit the brat. He wanted to make her hurt, the way she made him hurt. She'd stolen his father from him, she and her stupid mother, and he would never, ever forgive her.

Impulse jerked him to his feet. His socks muffled all sound as he padded out of his room and down the hall to Jillian's room. He stood in the middle of it, looking around. Like all children, she gathered her treasures around her, the room was littered with her favorite books and dolls and other mementos with meanings obvious only to her. Rick didn't care about any of that; he just looked for her special doll, the one she loved more than any of the others, a bedraggled plastic playmate she had named Violet. She usually slept with it snuggled against her cheek.

There it was. Rick grabbed the doll and slipped back to his own room, trying to decide what to do next. He wanted to whack the thing to pieces and leave it on Jillian's bed, but animal cunning told him he would be blamed for it, because there was no one else who could have done it. Still, just hiding the doll from her wasn't enough. His jealousy demanded more; he needed to destroy something she loved, even if he was the only one who knew about it.

Smiling, he got his pocket knife from the top of the dresser and opened it. Sitting down on the bed, he calmly and thoroughly dismembered the doll. Jillian wouldn't know what he'd done; she would cry because her favorite doll was lost, but no one would accuse him of anything. He would hug the knowledge to himself, and every time he looked at her he would gloat, because he would know and she wouldn't.