Heart of the Woolf (Woolf Series) 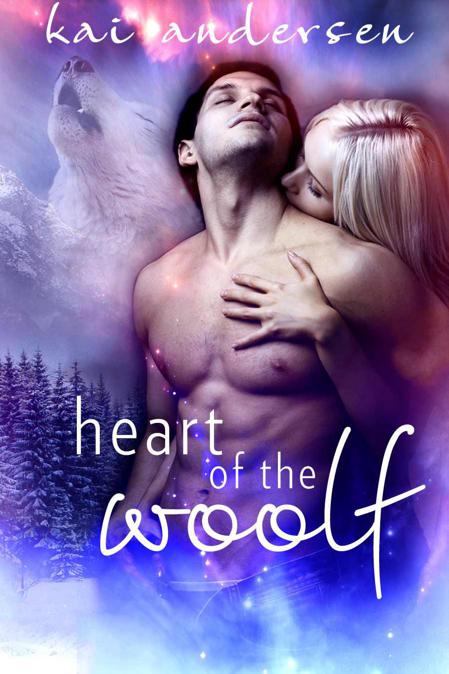 Praise for the writing of Kai Andersen

Tales of Enchantment 1: The Question of Royalty

Tales of Enchantment 2: The Quest

I liked this second installment of the story even better
than the first. The writing is smooth and literate, neither too spare nor too
florid – in fact, it’s just right!

The use of family, court politics, enchantment, and
beautifully written sex made
The Quest
an exceptional book, and one I
can recommend to anyone.

The Question of Royalty
and
The Quest
will
be re-released soon.

Heart of the
Woolf

All rights
reserved. With the exception of quotes used in reviews, no part of this ebook
may be reproduced in any print or electronic form without prior written
permission from the publisher, Chained Hearts Publishing. Please respect the
hard work of our author.

This ebook
is a work of fiction. Any names, characters, places and incidents are a product
of the author's imagination and are used fictitiously, and any resemblance to
actual persons, living or dead, business establishments, events or locales is
entirely coincidental.

Kai Andersen has always loved books. Ever since she could
remember, stories have always fascinated her. The humdrum of her life forced
her to seek the excitement that could be found in books. As Belle had said (in
Disney's Beauty and the Beast), "far off places, daring swordfights, magic
spells, a prince in disguise..." fairies, witches, wizards,
what-have-you...What can top that?

Escape from her boring ordinary life doesn't entail
shopping-till-I-drop excursions (but this isn't a judgement on those who love
these kinds of things!), but journeys into an alternate reality, a fantasy
world with kick-ass heroines and warrior-princesses, where women are strong
enough to make certain choices and take charge of their destinies, including
that scrumptious man they want to spend the rest of their lives with. These are
women who do not wait for their 'heroes' and 'princes' to rescue them. They are
the ones who save the day! (or try to. )

But let's not forget the mysterious mage with his strong
magic and to-die-for body, or the handsome prince with his white charger and
unique fighting abilities. And a wicked sense of humor. That is a must!

She loves heroes and heroines with whom she can identify
with, i.e. characters who are flawed, who have their own sets of strengths and
weaknesses, who find love and passion in each other's arms. So, these are the
kinds of stories she writes. Or hope to write.

Edge of Desire by Crimson Fox

Heart of the Woolf by Kai Andersen

Secret of the Wolf by Sienna Matthews

In the Marquess’ Bed by Jenna Rose Ellis

Woolf Series 1: Heart of the Woolf

Slamming the door behind him, Jake strode into the apartment,
discarding his tie and dumping his briefcase on the first available surface.
“Lila! Honey, are you ready? We have to go!”

He walked quickly into the kitchen. “Lila!”

Damn, where was she? They were cutting it short as it was.

“Lila!” He threw open the bedroom door and stared in shock.

The wardrobe doors were open, displaying the empty space
where her clothes used to hang. Lila’s myriad bottles and vials, which normally
rested on top of the dressing table, were gone, leaving circular imprints in
the dust. A small piece of black paper lay in the middle of their double bed,
standing out in stark contrast against the white satin sheets.

He walked toward the bed in a daze, heart pounding. He wanted
to run in the opposite direction, but his feet drew him inexorably forward. He
picked up the paper. The message, written in silver ink, read:

Ciao, honey. I’ve decided that living with a werewolf just
isn’t my style -- even one with oodles of money such as you have. Have a
good life. I intend to.

He crumpled the paper in his hand. Shaking with rage and
despair, he balled his hands into tight fists. He turned, punching the wall
with such force, his knuckles throbbed, echoing the pain in his heart.

Closing his eyes, he threw back his head and howled.

“It’ll only take me a few minutes to go over the changes
we’ve discussed. Why don’t you sit down?” Jake Woolf, head of Creative Minds’
Consumer Business Division, gestured toward the chairs in front of his desk.
His gaze lit on her for a second before he looked down, focusing on the file in
his hands.

She took one of the proffered seats. Her bearing straight, she
sat near the edge of the chair with her hands coolly folded on her lap. She
assumed the same pose every time she “visited” her boss in his office, creating
a picture of the icy, elegant businesswoman she wanted the world to see.

That she especially wanted her
boss
to see.

In her high stiletto heels and coal-gray blazer with matching
skirt, the kind of outfits she termed her “power suits,” Adrienne knew she
succeeded in creating the cool image she wanted to project.

Because there were some things that she wanted to
hide ... and bury forever.

Unbeknownst to him, she harbored a secret crush on her new
boss of two months. “Crush” sounded childish, but her crush was accompanied by
a lust so intense she dripped with her own juices after every meeting. Nothing childish
about that.

She studied him, as he studied the document. Why the strong
attraction? He certainly wasn’t her usual type of man. Maybe it was his head of
raven-black, slightly curled hair, giving him a dark, haunted look. Or maybe it
was his unusually colored eyes, with their enigmatic expression, hinting at
deep secrets. Or his full, kissable lips? His instinctive command of authority?

Across the desk, Jake flipped through the final draft of her
marketing proposal, his forehead wrinkled in a frown.

As assistant manager, Adrienne’s usual role was to supervise
her team’s marketing efforts and accompany the junior staff on negotiations
they wouldn’t be able to handle on their own. Recently though, a potential
major -- as in
very big, gargantuan and would probably be responsible
for their fat bonuses this year
-- account landed on their doorstep,
and the big bosses sent down a directive stating they must close the deal on
this account, or else! Hence, Adrienne was handed a plum account for her
personal portfolio ...
if
she could secure it.

Jake leaned back in his chair and flipped to the next page.
His lips pursed. His pink tongue peeked out from between his teeth.

Heat hit her low in her belly.

Damn, but the man, already oozing with sex appeal, got sexier
every time she saw him.

She smiled suddenly, the answer to the question of what
attracted her to him becoming clear. His tongue, and the endearing way he held
the tip between his lips when he was deep in thought, never failed to affect
her.

Adrienne bit her bottom lip to keep the moan from escaping,
but she couldn’t control her eyes, which were riveted on his mouth. Her heart
thudded, her pulse in overdrive. Cold sweat lined her forehead, yet a slow burn
swept through her, and a surging wetness pooled between her thighs.

Lust -- old-fashioned, basic, raw lust she kept with
extra diligence from her boss.

Tension pervaded her body. A strong, yet familiar yearning
caught hold of her, making her want to ... soar like an eagle with wings
spread wide, break free of the restrictions she put on herself, give voice to
the passion riding her veins ...

That pink tongue was really driving her crazy.

She leaned forward. Her lips caught hold of it, drawing it
into her mouth. Wet and rough and sandy, the friction rubbed against the
smoothness of the insides of her mouth. So hot, scorching her like the noonday
sun. All heat and power and might. She drowned in the strength of his arms and
in the hardness of his body. She was surrounded by him, his male scent, his
warmth, his virility.

She wanted him, above her, below her, inside her. Her pussy
clenched at the thought of gripping him ... encasing him ... Her
panties were soaking from the wetness pooling at her opening.

Beneath her clothes, her nipples tightened, aching to be touched.
His hand brushed against the taut peaks. Electric bolts of desire sizzled
through her. She leaned into his hands, yearning for him to cup and squeeze her
breasts.

She sucked on his tongue, loving the rough, warm taste. She
gripped the table edge for balance as she leaned closer and their mouths fused
in a voracious kiss. So much passion ... What a gad-awful waste of two
months! If she had only made her move earlier ...

“Adrienne ...” His voice seemed to come through a long
tunnel.