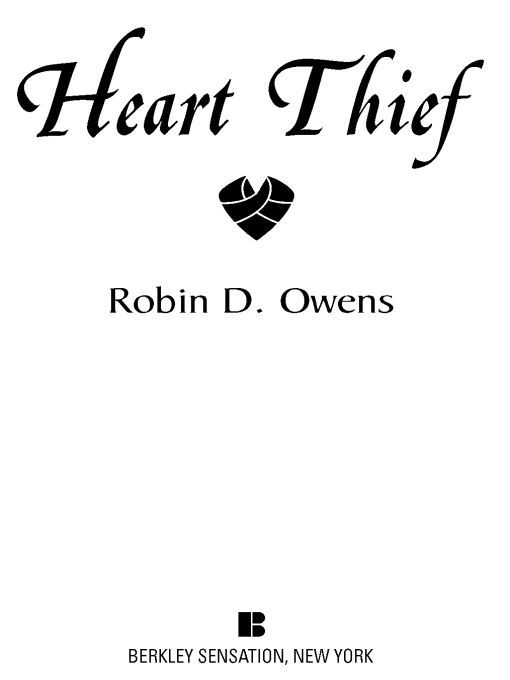 Table of Contents
Title Page
Copyright Page
Dedication
Acknowledgements
Â
One
Two
Three
Four
Five
Six
Seven
Eight
Nine
Ten
Eleven
Twelve
Thirteen
Fourteen
Fifteen
Sixteen
Seventeen
Eighteen
Nineteen
Twenty
Â
Teaser chapter
Praise for
HeartMate
Winner of the 2002 RITA Award
for Best Paranormal Romance
by the Romance Writers of America
Â
“Fantasy romance with a touch of mystery . . . Readers from the different genres will want Ms. Owens to return to Celta for more tales of HeartMates.”
âMidwest Book Review
Â
“
HeartMate
is a dazzling debut novel. Robin D. Owens paints a world filled with characters who sweep readers into an unforgettable adventure with every delicious word, every breath, every beat of their hearts. Brava!”
â
Deb Stover, award-winning author of
A Moment in Time
Â
“A gem of a story . . . sure to tickle your fancy.”
âAnne Avery, author of
All's Fair
Â
“A sensuous and hilarious courtship . . . a fun readâsexy in all the right placesâwith a brooding hero to die for . . . Hope for more adventures on the planet Celta.”
âRomantic Times
Â
“It shines and fans will soon clamor for more . . . A definite keeper!”
âThe Bookdragon Review
Â
“This story is magical . . . doubly delicious as it will appeal to both lovers of fantasy and futuristic romance. Much room has been left for sequels.”
âPNR Reviews
Titles by Robin D. Owens
HEARTMATE
HEART THIEF 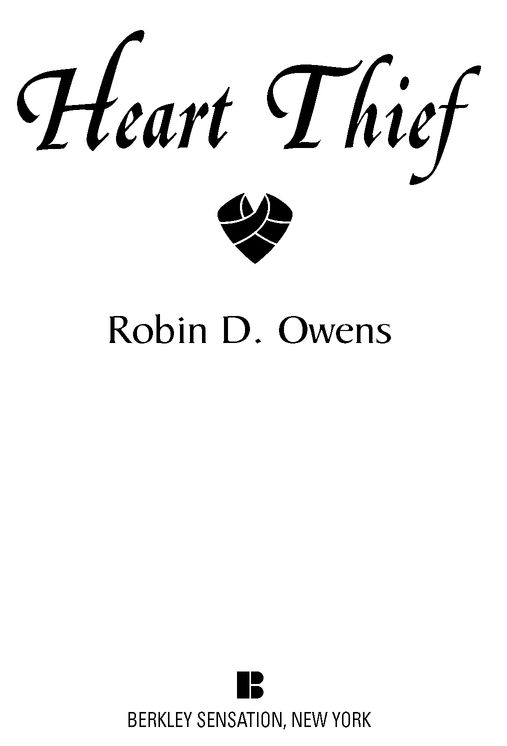 To all my friends online and off
who read and write paranormal romance.
From Australia to Manitoba our passion
transcends all boundaries.
Believe in magic and reach for the stars!
Â
and to
Â
Mistral/Samba
who sprawled at my elbow and told me her adventures
Acknowledgments
Since this book went through five major revisions, I have a lot of people to thank. Naturally, all mistakes are mine.
My friends and coworkers on the “project” for keeping me sane: Joanne, Meraj, Sharon G., Sterritt, Teri, Kay, Laura Kenny (actress), Bill, Carew, Bob, John, DK, Dennis, Judy, Cherie.
In Memoriam: Sonya Roberts
My first critique group, who suffered through three revisions: Anne, Diana
www.dianarowe.com
, Judy, Sharon
www.sharomignerey.com
, Steven;
My other critiquers: Alice, Janet L., Leslee
www.lesleebreene.com
, Sue, Teresa, Monica, Linda H., Wendy, Eric, Charles, Joe, Margie, Donna, Chris, Stephanie, Tahtim, Janet M.
www.millerclan.com/janetmiller
, Margaret
www.margaretmarr.com
, Cate
www.caterowan.com
, Pam;
“Rough draft editors” who cut the manuscript by a third: Anne, Liz R., Kay (Cassie Miles), Peggy
www.peggywaide.com
;
My readers: Giselle and Morgan poodle experts, Anne Braude (Tal) for the brilliant inspiration of the mole; Ann (An'Alcha passion flower)
members.aol.com/captnann/AnnJR.html
;
Aryavarta Kumar who helped incredibly, and at the last minute, with nanotech data and brainstorming
www.nanoapex.com
;
My editor, Cindy Hwang, for buying
another
book;
My proofreader, Rose Beetem;
The cats: Diva, Mistral (Samba), Maddox (Zanth), Muse (Princess), Black Pierre, Pinky (who is not my cat), and Sabrina puppy who lived with me a while and thought she was a cat.
Diva, I TOLD you I'm SORRY I had to cut your scene! I'll have Lisa, (
www.lisacraig.com
), put it up on my website, I promise! And Straif Blackthorn deserves a high-maintenance, nagging, Queen of the Universe Fam Like you . . .
“Diva's Scene”
www.robinowens.com
One

DRUIDA CITY, CELTA, 400 Years After Colonization, Autumn
Â
Ruis Elder stared out windows that faced the street, checking
as he did several times a day that no strangers loitered nearby. No assassins or guardsmen hired by his uncle Bucus.
Ruis's birthright had been denied himâhis rank as the Heir and ensuing Lord of a GreatHouse, and the estate itselfâsomething he strove to forget. To remember made him feel worthless. All he chose to recall was that he must always be on guard.
He went to his bedroom and reached through the open window. The wooden drying bar that extended into the courtyard from the rusty brick wall held his last good shirt. He plucked the red silkeen from the hanger.
The chill autumn air made him catch his breath. The deep blue of the sky with the distant small white sun dazzled his eyes. He savored the sweet-sharp tang of turning fall leaves as he turned from the window. The air felt good, and the silkeen shirt sliding over his skin felt better.
He'd moved into this apartment in the heat of late summer, and it was time to leave. He frowned. The intervals between his moves were getting shorter and shorter.
Stamping into new black boots, Ruis let his gaze linger on the Earth Soil Analyzer, brought with the colonists to Celta. The machine would take more time, money, and knowledge to fix than he'd expected. He stopped himself from picking up tools to tinker with it once more. When he worked on ancient machines, he lost himself in the moment, able to forget his wretched past and ignore his precarious future. His fascination with artifacts that no one else cared about was his salvation.
He tore his gaze from the analyzer. Two Earthsun gems shone in the sunlight on the table. Ruis grimaced. Stealing was a fact of his life since his defect in Flairâpsi powerâprecluded any normal work on Celta. When he was able to find a job, it was as a common laborer. And laboring didn't pay enough to rescue the past.
He took the jewels, placed them in a wall crack, and brushed flaking grit from the surrounding bricks to cover the gems. One Earthsun was for emergencies, for bribes and survival if his murderous uncle Bucus found him. The second was to acquire parts for Earth mechanicals, which Ruis collected from the corners of abandoned warehouses. Ruis thought he, alone in every other way, was the only one on Celta who was interested in saving and restoring the old machines.
The door burst open.
Guardsmen poured into the room; two stumbled over each other, sprawling. Ruis lunged, aiming for a beefy man twice his weight. Ruis slammed a fist into the guard's jaw. The man staggered back.
“Get him!” cried a guard with chevrons on his shoulders. The one in charge. Ruis spun to jump at him.
The two on the floor staggered to their feet. The one he had punched lifted his staff.
It whistled through the air, hitting Ruis's head. Pain exploded into white streaks, then darkness claimed him.
Sometime later the blackness receded and the buzzing in his ears solidified into actual voices.
“Just a tap. It was just a little tap,” the slack-faced guardsman said in a whining grumble, rubbing his chin. “He'll wake up soon, a minute or twoâ”
Someone grabbed Ruis's hair and yanked his head up. He grit his teeth against the roiling pain. Sweat coated his body.
A stink of liquor and tobacchew swept over him, making his senses whirl even more. He blinked and saw he was still in his rooms.
“Don' worry, Toady, he's comin' 'round. He's jus' a little more
delicate
a guy than you're used to tappin'. He's got noble blood in him, ya know.”
Ruis was dragged to his feet with a clanking sound that hurt his head. He looked down in horror. Iron manacles clamped his wrists. He'd never seen such shacklesâthings from the ancient past. The smelly guard held a length of chain as a leash.
Ruis took a step and found himself hobbled by leg irons cutting into his new boots.
Bound and helpless again! His greatest fear. He shuddered, but reminded himself he wasn't a helpless boy anymore. Would the NobleCouncil torture him as Bucus had?
The fact that he even existed, a Null without the psi powers that every other Celtan had, infuriated Bucus. If Ruis had been normal, he would be GreatLord T'Elder, not Bucus. All the status, the power, and the estates should have been Ruis's. So Ruis had always been a painful thorn in Bucus's side. A thorn he'd tried time and again to remove and destroy.
Red-hot anger overwhelmed Ruis's pain. He lifted his hands to strike and was jerked off balance by the smelly one.