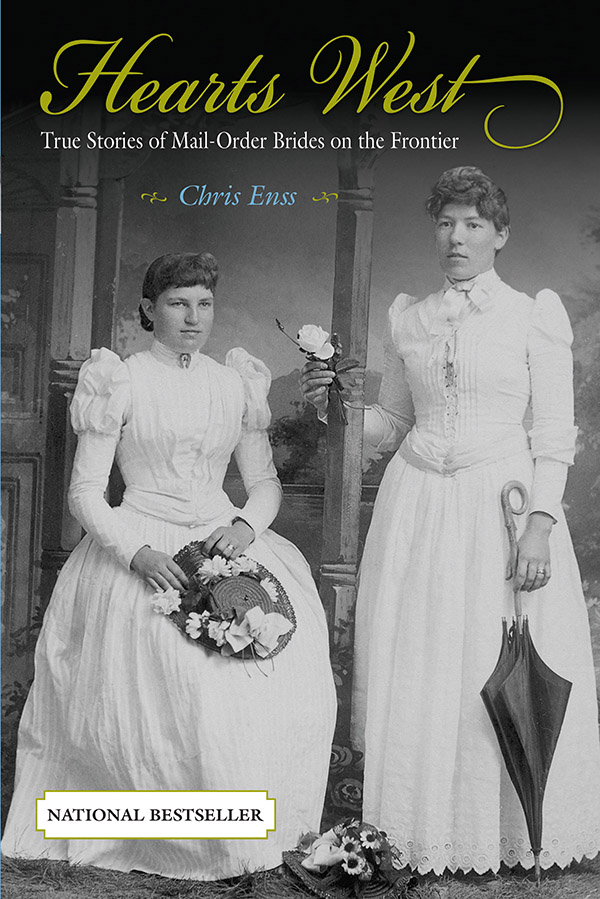 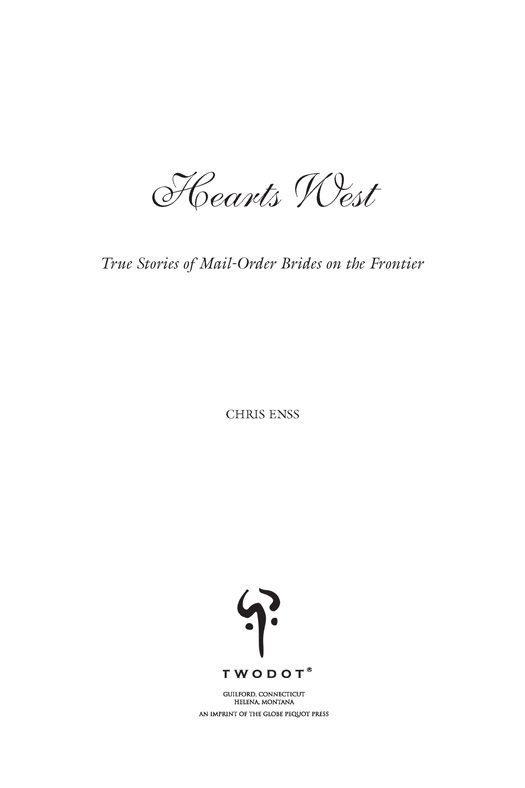 All rights reserved. No part of this book may be reproduced or transmitted in an form by any means, electronic or mechanical, including photocopying and recording, or by any information storage and retrieval system, except as may be expressly permitted by the 1976 Copyright Act or by the publisher. Requests for permission should be made in writing to The Globe Pequot Press, P.O. Box 480, Guilford, Connecticut 06437.

TwoDot is a registered trademark of The Globe Pequot Press.

Trouble on a Bridal Tour

For My Grandma Edna

Who Possesses the Kindest Heart in the East and the West

W
hen I was a teenager, the notion of advertising for a spouse inspired me to use the technique to find a date for the JuniorâSenior Prom. The ad I placed in the school newspaper read like this:

Wanted:
A date to the JuniorâSenior Prom. If even slightly interested in attending this year's big event, please meet me in front of the school library at lunch time.

Fourteen girls in the same situation as I was showed up, hoping there would be an onslaught of boys who wanted to go to the dance. Alas, only one boy stopped by the library and he was waiting for members of the chess club to meet him and get a game going.

And so I begin my thanks and recognition to the Buena High School newspaper editor who allowed me to so boldly tell my classmates I was dateless and needed help. In writing this book, fond memories of that experience washed over me and helped me to identify, on a small level, with the mail-order brides of the West.

I received a great deal of assistance from the librarians at the California State Library in Sacramento and the Madelyn Helling Library in Nevada City. Researchers at historical libraries from Arizona to New York happily shared many of the documents used to create this book. In particular I would like to express my gratitude to Shane Molander at the State Historical Society of North Dakota; Delores Henry at the Public Library in New Bedford, Massachusetts; and Julia Davis Park at the Idaho Black History Museum. Without their generous contributions this material would not be complete. Thank you also to JoAnn Chartier for adding to the content of the book and seeing me through the process.

And finally, thank you to my editors Stephanie Hester and Megan Hiller for their perseverance and direction. I appreciate all you have done.

T
he impact of women on the American frontier in the nineteenth and early twentieth centuries should not be underestimated. To a large degree, women were responsible for taming the wilderness of the “Wild West.” Under their influence, churches were formed, schools and libraries were established, and the importance of home and hearth was rediscovered. The result was nothing short of a complete transformation, the conversion of the western frontier from a rowdy, male-dominated society into a place that became a mecca for settlement even after the Gold Rush and the promise of cheap land came to an end. During these early years of western development, women often worked right alongside their men, turning the soil, planting the crops, and caring for the children who came along.

It didn't take long for men who had traveled to far-off places west of the Mississippi to recognize that their desire and need of the “gentler sex” was profound. It is this desire and need that leads us now to the wonderful compilation before us.

Hearts West
reveals the real-life tales of women who became mail-order brides. Also presented are the stories of those enterprising few who attempted to make their fortune by bringing young women, spinsters, and widows to would-be husbands in the West. By the 1850s, so enticing was the call to riches that there were more eligible bachelors in the West than there were in the East. Some women, after answering a mail-order request, were taken out to the new land by their intended. Others traveled alone overland or by sea. Many of the latter became seasick and would remain so for the length of the voyage. As we shall see in the unfolding set of stories brought together here for our enjoyment and education, not all of the matches were successful. All of them, however, contributed to the rich and colorful history of the West's early years.

Unmarried miners in these parts showed a consciousness of being somewhat the worse for a long, rough journey West in which they had lived semi-barbarous lives, and for their continued separation from the amenities and refinements of home.

T
he promise of boundless acres of land in the West lured hundreds of men away from farms, businesses, and homes in the eastern states as tales of early explorers and fur trappers filtered back from the frontier. Thousands more headed for California after hearing the siren call of Gold! Tracts of timber in the Northwest and a farming paradise in the Willamette Valley of Oregon had even more people packing up and leaving home for the promised land.

The vast acres and the trees and the gold were all there, and men set about carving their place in the wilderness. By the early 1850s, western adventurers lifted their heads and looked around and realized one vital element was missing from the bountiful western territories: women.

“A woman's track was discovered in the road leading to Mormon Island. The track of a woman was such a novel thing the boys enclosed it with sticks (you know women were scarce in California in those days), sang, danced, telling yarns and giving cheers to the woman's track in the dust until a late hour in the evening,” recalled Henry Bigler, third governor of California. 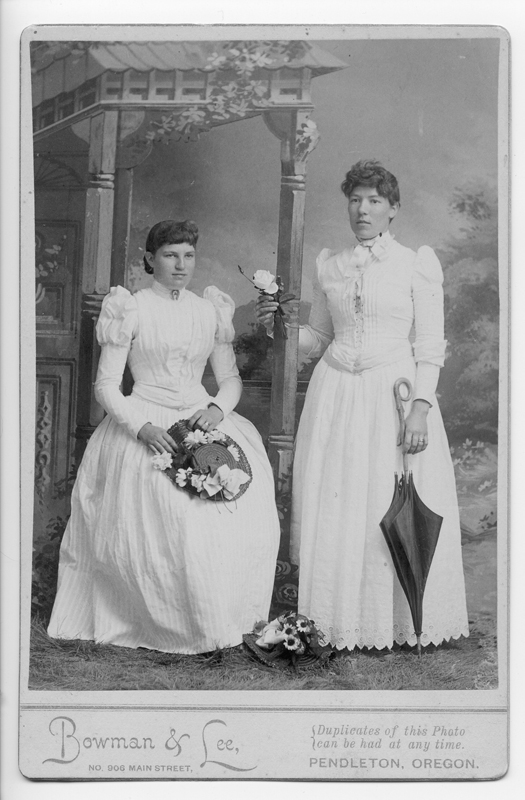 Unidentified sisters dressed in their Sunday finery submitted this photograph to the San Francisco edition of
The Matrimonial News
in 1882.

Eliza Farnham, recognizing that she was no beauty, nevertheless was astonished to be the target of admiring eyes wherever she went in the Gold Country in 1849. Shocked at the dissolute lives of the largely male inhabitants of California, she conceived a plan to bring proper ladies to the West, which she saw as badly in need of the civilizing hand of woman. Her plan included a rigorous application process to guarantee only the most virtuous ladies would arrive on the good ship
Angelique
. The plan was widely publicized and endorsed by clergymen and officials. With anticipation running high, hundreds of angry bachelors nearly started a riot when just three ladies tiptoed down the gangplank in San Francisco.

In Washington Territory, where men outnumbered women nine to one in the 1850s and 1860s, a scheme to ship respectable women and families to the shores of Puget Sound was hatched by Asa Mercer. He raised money for the first trip, traveled to the eastern seaboard, and in 1864 brought his first shipload of marriageable women to Seattle. Only eleven women disembarked, leaving a lot of disillusioned bachelors. Mercer's second trip in 1866 netted a larger cargo of potential brides, but that trip was to be his last attempt at supplying a rather urgent demand.

Newspapers editorialized about the lack of marriageable females: “We want an emigration of respectable females to California: of rosy-cheeked âdown east' Yankee girlsâof stout âhoosier' and âbadger' lasses, who shall be wives to our farmers and mechanics, and mothers to a generation of âYankee Californians,'” opined the editor of the
Alta California
newspaper in 1851.

The
Matrimonial News
, a San Francisco matchmaking newspaper, was dedicated to “promoting honorable matrimonial engagements and true conjugal facilities” for men and women through personal advertisements, and was a forerunner of the matchmaking clubs and personal ads in newspapers today. Not all of the matrimonial bureaus and agencies were legitimate, however, and many a disappointed bride or groom was left with empty pockets after contracting for a mail-order mate.

Mail-order bride Elinore Pruitt, a widow from Arkansas, married Clyde Stewart after answering his ad in the
News
. The two were happily married for more than twenty years. Eleanor Berry was not as lucky. Her mail-order husband misrepresented himself in his letters and the marriage lasted less than an hour.

In Arizona, shootouts over the few eligible females led to the establishment of clubs devoted to arranging marriages. Six Tucson wives met in 1885 and formed the Busy Bee Club. Convinced that marriage would spread calm among the black miners starved for the comforts of home, they met to recruit suitable women to marry the town's unruly bachelors. Some of the men were old enough to be the fathers or grandfathers of the teenagers they selected as their brides. Once the vows were exchanged, these young women often took on a houseful of children as well as a husband.

Hearts West
contains the stories of men and women longing for the tie that binds, who risked everything in making an alliance with a virtual stranger. Some married well; some lost everything. Some, like Seattle's Mercer Maids, became integral parts of the history of a specific region. Others may be anonymous, yet all deserve to be remembered for helping to civilize the rugged frontier.

The Five Kisses by Karla Darcy
Curse of the Granville Fortune by Hashway, Kelly
One Night With a Billionaire (Novella): The Perfect Man by Thompson, VickiLewis
Jericho by George Fetherling
Brides of the West by Michele Ann Young
Finding His Shot by Sarah Rose
Identity Theft How to Protect Your Name by Gummo
The Train to Paris by Sebastian Hampson
The Open Door by Brian Brahm
Bread Machine by Hensperger, Beth
Our partner