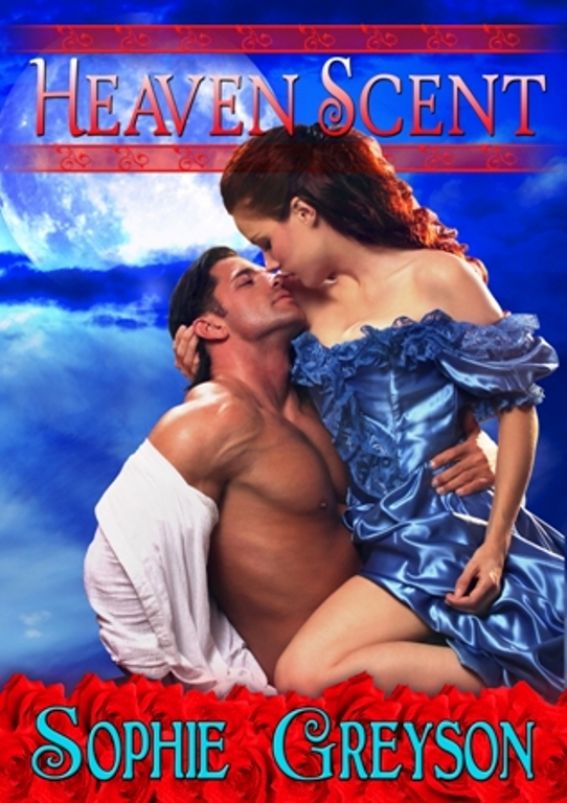 This ebook is licensed for your personal
enjoyment only.

This ebook may not be re-sold or given away
to others.

additional copy for each recipient. If you
are reading this book

and did not purchase it, or it was not
purchased for your use only,

please return to your online retailer and
purchase your own copy.

Thank you for respecting the author’s
work.

This book is a work of fiction. Names,
characters, places and incidents are

either the products of the author’s
imagination or are used fictiously.

Any resemblance to actual persons (living or
deceased),

events or locations is entirely coincidental.
.

Jane Worthington knew it
the moment He appeared at the foot of her four-poster bed, bathed
in rays of dazzling white. She recoiled, not out of fear
of
Him – for he radiated
pure joy -- but fear of leaving all she held dear.

His beating, blood-red heart hovered
above His chest rather than within it, expanding a little with each
heavy thud. It emanated a love so strong, so powerful, it filled
her sunken chest to near bursting. Her frail body struggled to
breathe, her gasps echoing in the quiet, dark master suite of
Tarinworth Manor.

‘Why now?’ she asked Him in her
mind.

His answering smile was warm as He
stretched His hand towards her, offering a blissful, painless
freedom her tormented body craved. She could feel the blessed
relief, the peaceful ecstasy pull her towards Him. It would be so
easy to give in, to take His hand and go. The constant pain and
suffering would be no more. She would finally be able to
rest…

“Mother, are you thirsty? Would you
like some water?”

Jane mustered all of her strength to
open her eyes. No words would come. She gazed upon her beautiful,
eight-year-old daughter and felt an overwhelming sadness that
eclipsed her physical pain.

She would be stunning, her Tarin, with
the emerald green eyes she’d inherited from her father and Jane’s
own shiny, coppery waves.

Her delicate features disguised a fiery
spirit Jane herself had once held. Tarin was bright beyond compare,
but her curiosity would surely bring trouble in the years to
come.

Years Jane would not behold.

She had always been told there was no
pain like that of a child’s death. Yet, leaving her daughter upon
her own death was more agony than Jane could bear. She would not be
here to protect Tarin, to ensure she lived the life she deserved.
Her daughter would play victim just as she had.

'How can I leave her?' she asked Him,
her dry, cracked lips unmoving. 'I am her mother. She will need me
as she grows.'

He stared at Jane solemnly, the truth
written in His soft eyes. Tarin had stayed by Jane’s side every
hour of every depressing day for as long as her father would allow.
She had taken on the role of caregiver despite the number of nurses
the Duke‘s family had hired. Tarin fed Jane when she remained too
weak to do it herself, cooled her forehead when the fever grew
high, and read to her to pass the time.

A rush of shame and self-loathing
engulfed Jane. Tarin was just a child, too young to bother with the
task of caring for an ailing adult. A mother’s purpose was to care
for her children, not the other way around.

She had failed her daughter.

Yet, Tarin never left her side. Even
when the nurses tried to rush her from the room while they dressed
Jane’s sores, Tarin stubbornly remained, holding Jane’s hand in her
tiny fist.

Pride for her daughter burned in Jane’s
chest.

Hopping up to sit on the edge of the
bed, Tarin brushed the hair back from Jane’s forehead, her touch
soft, gentle.

“Mother, you smiled,” Tarin declared
softly, her green eyes shining in the candle‘s glow. “You must be
feeling better.” She cupped a small palm against Jane’s
cheek.

The white rays brightened, nearly
blinding in intensity now as they glittered around Him in a
rotating arc.

“She has worked so hard to
heal me.
Please
.
Have mercy on us.”

Suddenly, a single ray of red and one
of blue shot from the pulsating heart and bathed Jane in a violet
hue. She felt a strength within, as though someone had taken
possession of her body and moved it as a puppet. A joy so profound
it shook her, overcame Jane.

“Mother, first you smile, now you weep.
Please tell me what troubles you and I will make it better.” Tarin
rubbed the back of Jane’s hand with her thumb.

The little girl shot up off the bed and
stared at Jane with eyes like china saucers. Jane would’ve laughed
aloud if she were able.

“Mother! You spoke! I must go tell
Father.” She turned to go, her red waves flying behind
her.

“Tarin,” Jane forced the words from her
dry throat. “Do not go.”

Tarin stopped and stared back at Jane,
her legs and feet twitching. The urge to spread good news ate the
poor child alive. She returned to the side of the bed, her face
alight with hope.

Jane studied every one of her
daughter’s features, absorbing them all, storing the memories to
carry with her into the unknown.

How easy it was to take the gift of
time for granted. She had wasted so many years trying to be a
loving, obedient wife, living under the thumb of her noble family
and a husband that was never home.

She had allowed her talent and love of
painting to die years ago when Tarin’s father denied her study in
Paris.

She had denied herself the love of her
life, a carpenter’s son, by giving into her father’s wishes and
marrying someone of her own station. Henry Worthington, the third
son of the Duke of Tarinworth, was above her station. Jane’s father
had been pleased with the match.

Jane had been miserable.

Long days and nights spent alone in
this enormous, centuries-old mansion ate away her laughter and
happiness, despite the number of ball gowns and jewels Henry
showered upon her.

Now, after eight short years, that life
was over. Just when she had found her worth, Jane must leave it
behind.

She would leave Tarin –
forever.

“I love you, Tarin,” she said softly.
“I am so proud of you. You have taken such good care of
me.”

Her daughter’s smile rivaled the
radiance emanating from Him a few feet away.

“I love you too, Mother,” she said,
throwing herself at Jane and smothering her in a tight
hug.

Jane clung to her daughter with all her
strength, inhaling the sweet, lavender scent of her hair, taking in
the feel of Tarin’s small fingers splayed on her shoulders. Her
breath was soft at Jane’s ear, her body small yet strong where it
rocked against hers.

“She is so young…,” Jane pleaded, His
face a blur to her now.

He extended His hand again through the
violet haze, His smile warm. Her body weakened. She must
hurry.

“Tarin, listen,” she said, reluctantly
setting her daughter away.

Nodding solemnly, Tarin clutched her
hand as she sat back on the bed and played with the large emerald
on Jane’s left hand. “Yes, Mother.”

“I want you to promise me
something.”

Though Tarin’s eyes grew serious, the
hope never faded in their depths.

“Be happy, Tarin. Live each and every
day with a bright outlook. Do not let others weigh you
down.”

Her daughter frowned. “You mean like
when Father comes home angry – I should still smile and give him a
hug?”

“Yes,” Jane replied with a proud smile.
“Exactly like that.”

Tarin nodded once. “As you wish,
Mother.”

Suddenly, a chill swept through Jane.
The violet hue faded as the strength slowly drained from her body.
She shivered violently.

“Mother, you are trembling. Let me
cover you.” Tarin pulled the soft blankets up to Jane’s chin and
tucked them around her.

Struggling with every word now, Jane’s
covers were useless against the iciness that settled inside
her.

With a giggle, Tarin climbed under the
covers and snuggled up against Jane’s side. She wrapped her arms
around Jane’s waist.

Jane squeezed her eyes tight against
the burn of unshed tears.

“Live your life for
you
, Tarin,” Jane
continued. “You can do whatever you set your mind to. If you want
to study law, sing, write books…”

“Or be a physician?”

Jane nodded. “Or be a physician. Do it.
Do not let a man steal your will. Do you understand? Your life is
yours alone to live and you only get one chance at it.”

“Yes, Mother,” she replied. “I shall be
a physician. I will learn all there is to know so I can make you
well.”

Wincing, Jane squeezed her daughter.
“Above all, Tarin, marry for love. Do not settle. Do not allow your
father to arrange a marriage for you. Find a good, strong man - one
that will support you in your quest to become a physician or
whatever you choose to be.” She paused, fighting to muster her
remaining strength. “Promise… me…”

“I promise,” Tarin replied. “You will
help me to remember all of these things, right, Mother?”

The violet hue vanished like a flame
doused with water. No strength remained in Jane’s body. It vanished
as quickly as it had appeared.

“I must go, Tarin,” she whispered, her
eyes transfixed on Him.

“Go?” she asked sitting up to stare at
Jane, brows furrowed. “Go where? I will go with you.”

“No, Tarin.” Jane shook her head
against the pillow.

“Why?” Tarin asked, as she gripped the
covers in a tight fist. “I want to go!”

“I must leave you,” Jane said, His hand
just inches from her now.

The bed jerked. “I will always be with
you, Tarin, even if you cannot see me.”

“No!” Tarin cried, shaking her
shoulders. “Mother, no! Please don’t leave me! I promise I will
make you better.”

“I love you, Tarin. Be happy,” she
whispered, as she grasped His hand and was immediately engulfed in
rapture.

Dammit, no. He didn’t just hear what he
thought he’d just heard. This opportunity had been a long time
coming and tonight was his last chance to succeed. He’d sold his
bounty of land yesterday and tomorrow he’d be well on his way to
Boston. It was now or never.

Slowly, he raised his eyes, cringing
inside at what he hoped like hell he wouldn’t see.

Rosa’s eyes glared at him from where
she sat against the trunk of the old oak, her shoulders bare and
her voluptuous breasts nearly so – until she’d stopped
him.

“You are
muy hermoso
, Rafe, and
many call you hero. But I am a lady. I do not do such things
outside of marriage.”

Leaning in to place kisses along the
side of her throat, Rafe eased his hand over the edge of her blouse
and lowered it further. Rosa moaned softly, turning her head to
allow him better access to the soft, smooth flesh of her
neck.

Love Never Dies by Lockner, Loren
Tear Me Away (Desert Wraiths MC Romance) by Kiss, Amy
Claimed by the Elven King: Part Four by Cristina Rayne
The Clever Fox: Part Two (The Pleasure Hound Series) by Ines Johnson
Cover of Darkness by Kaylea Cross
Summer Apart by Amy Sparling
Thousand Cranes by Yasunari Kawabata
Agnes and the Renegade (Men of Defiance) by Levine, Elaine
The Rancher And The RunawayBride: Part 2 by Susan Mallery
The Birth Of Eve by Hoy, E. S
Our partner