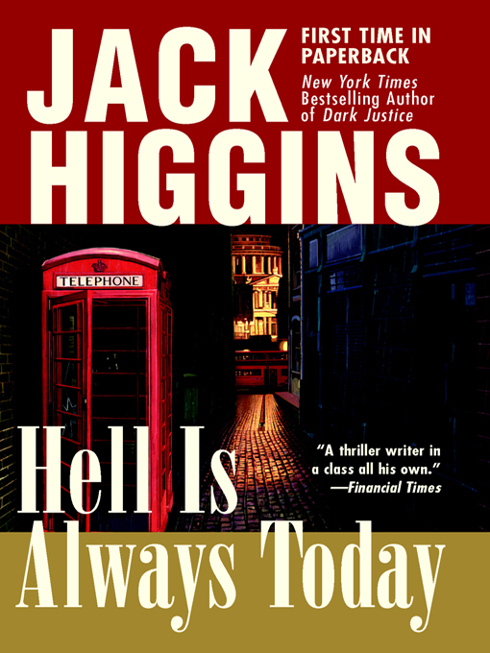 P
RAISE FOR THE THRILLERS OF
J
ACK
H
IGGINS

“Higgins writes with spare velocity, racing through a complex plot…[and] has no equal in the realm of ex-Nazis wreaking havoc…. Higgins maintains the suspense and even manages a series of nasty surprises along the way.”

“Starts off at light speed and quickly goes into warp drive, never easing up on the throttle so that readers never quite catch their breath.”

“The fun comes from the wisecracking band of dangerous but bighearted secret soldiers Higgins wheels out to save the world—and his galloping Hollywood-ready pace.”

“Swift and coursing with dark passion…as credible and steel-hearted as Higgins’s best.”

“This is Higgins near the top of his game…another winner.”

“The action is nonstop.”

“The action is sleek and intensely absorbing, but the supreme pleasure is in those Higgins celebrates—tarnished warriors who value honor over life and who get the job done no matter what the cost.”

“
The White House Connection
has one heckuva heroine…[who] begins a one-woman assassination spree that will keep you turning the pages.”

“High-tension action and harrowing twists—Higgins at his best.”

“A tight story with plenty of action.”

DRINK WITH THE DEVIL

“A most intoxicating thriller.”

“It is Dillon’s likeability and the author’s adroitness in giving his character the room he needs that make Higgins’s novels so readable.”

YEAR OF THE TIGER

“Higgins spins as mean a tale as Ludlum, Forsythe, or any of them.”

EYE OF THE STORM
Also published as
Midnight Man

“Razor-edged…will give you an adrenaline high. It’s a winner.”

“A whirlwind of action, with a hero who can out-Bond old James. It’s told in the author’s best style, with never a pause for breath.”

“When it comes to thriller writers, one name stands well above the crowd—Jack Higgins.”

“Dramatic…authentic…one of the author’s best.”

“A rollicking adventure that twists and turns.”

“Action-packed, colourful and written by a natural storyteller.”

THE KEYS OF HELL

IN THE HOUR BEFORE MIDNIGHT

YEAR OF THE TIGER

DRINK WITH THE DEVIL

EYE OF THE STORM
(
also published as
MIDNIGHT MAN
)

THE EAGLE HAS FLOWN

MEMORIES OF A DANCE-HALL ROMEO

A SEASON IN HELL

NIGHT OF THE FOX

THE LAST PLACE GOD MADE

A PRAYER FOR THE DYING

THE EAGLE HAS LANDED

THE RUN TO MORNING

TO CATCH A KING

A GAME FOR HEROES

THE WRATH OF GOD

A Berkley Book / published by arrangement with the author

The police car turned at the end of the street and pulled into the kerb beside the lamp. The driver kept the motor running, and grinned at his passenger.

“Rather you than me on a night like this, but I was forgetting. You love your work, don’t you?”

Police Constable Henry Joseph Dwyer’s reply was unprintable and he stood at the edge of the pavement, a strangely melancholy figure in the helmet and cape, listening to the sound of the car fade into the night. Rain fell steadily, drifting down through the yellow glow of the street lamp in a silver spray and he turned morosely and walked towards the end of the street.

It was just after ten and the night stretched before him, cold and damp. The city was lonely and for special reasons at that time, rather frightening even for an old hand like Joe Dwyer. Still, no point in worrying about that. Another ten months and he’d be out of it, but his hand still moved inside his cape to touch the small two-way radio in his breast pocket, the lifeline that could bring help when needed within a matter of minutes.

He paused on the corner and looked across the square towards the oasis of light that was the coffee stall on the other side. No harm in starting off with something warm inside him and he needed some cigarettes.

There was only one customer, a large, heavily built man in an old trenchcoat and rain hat who was talking to Sam Harkness, the owner. As Dwyer approached, the man turned, calling goodnight over his shoulder and plunged into the rain head down so that he and the policeman collided.

“Steady on there,” Dwyer began and then recognised him. “Oh, it’s you, Mr. Faulkner. Nasty night, sir.”

Faulkner grinned. “You can say that again. I only came out for some cigarettes. Hope they’re paying you double time tonight.”

Faulkner walked away and Dwyer approached the stall. “He’s in a hurry, isn’t he?”

Harkness filled a mug with tea from the urn, spooned sugar into it and pushed it across. “Wouldn’t you be if you was on your way home to a warm bed on a night like this? Probably got some young bird lying there in her underwear waiting for him. They’re all the same these artists.”

Dwyer grinned. “You’re only jealous. Let’s have twenty of the usual. Must have something to get me through the night. How’s business?”

Harkness passed the cigarettes across and changed the ten-shilling note that Dwyer gave him. “Lucky if I make petrol money.”

“I’m not surprised. You won’t get many people out on a night like this.”

Harkness nodded. “It wouldn’t be so bad if I still had the Toms, but they’re all working from their flats at the moment with some muscle minding the door if they’ve got any sense. All frightened off by this Rainlover geezer.”

Dwyer lit a cigarette and cupped it inside his left hand. “He doesn’t worry you?”

Harkness shrugged. “He isn’t after the likes of me, that’s for certain, though how any woman in her right mind can go out at the moment on a night when it’s raining beats me.” He picked up the evening paper. “Look at this poor bitch he got in the park last night. Peggy Nolan. She’s been on the game round here for years. Nice little Irish woman. Fifty if she was a day. Never harmed anyone in her life.” He put the paper down angrily. “What about you blokes, anyway? When are you going to do something?”

The voice of the public, worried, frightened and looking for a scapegoat
. Dwyer nipped his cigarette and slipped it back into the packet. “We’ll get him, Sam. He’ll over-reach himself. These nut-cases always do.”

Which didn’t sound very convincing even to himself and Harkness laughed harshly. “And how many more women are going to die before that happens, tell me that?”

His words echoed back to him flatly on the night air as Dwyer moved away into the night. Harkness watched him go, listening to the footsteps fade and then there was only the silence and beyond the pool of light, the darkness seemed to move in towards him. He swallowed hard, fighting back the fear that rose inside, switched on the radio and lit a cigarette.

Joe Dwyer moved through the night at a measured pace, the only sound the echo of his own step between the tall Victorian terraces that pressed in on either side. Occasionally he paused to flash his lamp into a doorway and once he checked the side door of a house which was by day the offices of a grocery wholesaler.

These things he did efficiently because he was a good policeman, but more as a reflex action than anything else. He was cold and the rain trickled down his neck soaking into his shirt and he still had seven hours to go, but he was also feeling rather depressed, mainly because of Harkness. The man was frightened of course, but who wasn’t? The trouble was that people saw too much television. They were conditioned to expect their murders to be neatly solved in fifty-two minutes plus advertising time.

He flashed his lamp into the entry called Dob Court a few yards from the end of the street hardly bothering to pause, then froze. The beam rested on a black leather boot, travelled across stockinged legs, skirt rucked up wantonly, and came to rest on the face of a young woman. The head was turned sideways at an awkward angle in a puddle of water, eyes staring into eternity.

And he wasn’t afraid, that was the strange thing
. He took a quick step forward, dropping to one knee and touched her face gently with the back of his hand. It was still warm, which could only mean one thing on a night like this….

He was unable to take his reasoning any further. There was the scrape of a foot on stone. As he started to rise, his helmet was knocked off and he was struck a violent blow on the back of the head. He cried out, falling across the body of the girl, and someone ran along the entry behind him and turned into the street.

He could feel blood, warm and sticky, mingling with the rain as it ran across his face and the darkness moved in on him. He fought it off, breathing deeply, his hand going inside his cape to the two-way radio in his breast pocket.

Even after he had made contact and knew that help was on its way, he held on to consciousness with all his strength, only letting go at the precise moment that the first police car turned the corner at the end of the street.

MATT HELM: The War Years by Wease, Keith
Rivals by Janet Dailey
Serenading Stanley by John Inman
Off Limits by Vos, Alexandra
Get Lost! by Nancy Krulik
Smooth Operator (Teddy Fay) by Woods, Stuart, Hall, Parnell
The Life and Opinions of Maf the Dog, and of His Friend Marilyn Monroe by Andrew O'Hagan
Fade to Black by Wendy Corsi Staub
No Plans for Love by Ruth Ann Hixson
Out of the Shadows by Bethany Shaw
Our partner