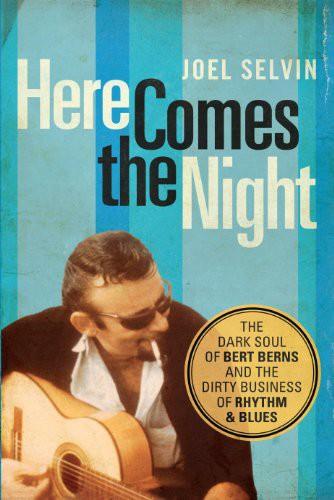 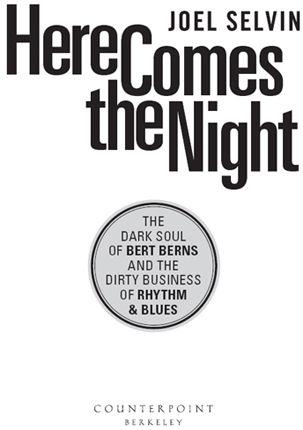 Here Comes The Night : the dark soul of Bert Berns and the dirty business of rhythm & blues / Joel Selvin.

To Brett and Cassie

You made it possible

Ricky Nelson: Idol For a Generation

WITH STEPHEN KING, DAVE BARRY, AMY TAN, AND OTHERS

Sly & the Family Stone: On the Record

Treasures of the Hard Rock Cafe

Red: My Uncensored Life in Rock

Peppermint Twist: The Mob, the Music, and the Most Famous Nightclub of the ’60s

Wear Your Dreams: My Life in Tattoos 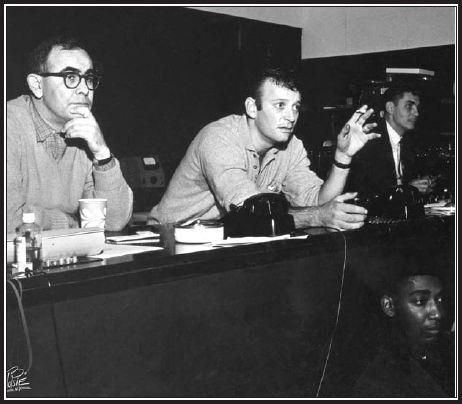 And Musical Appearances by 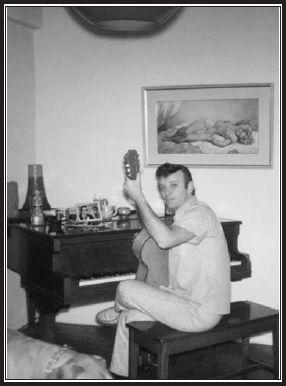 Berns with the Goya guitar at his penthouse

B
ERT BERNS WAS
one of the great originals of the golden age of rhythm and blues. He prospered and thrived under the auspices of Atlantic Records, a company devoted to authentic, vibrantly musical rhythm and blues records at the forefront of the art form. Under the beneficent encouragement of Atlantic’s Jerry Wexler, Berns developed into one of the leading record men of his day. His records with Solomon Burke established Burke as one of the most formidable figures of the rhythm and blues world, shoulder to shoulder with peers such as Sam Cooke, James Brown, Jackie Wilson, and Ray Charles. He brought the heart of the mambo into rock and roll—not the supple Brazilian samba rhythms found in records by Jerry Leiber and Mike Stoller or Burt Bacharach, but fiery Afro-Cuban incantations that pulsed with sex and sin. Almost alone among his contemporaries on the New York scene, Berns traveled to England as his song “Twist and Shout” rose as an anthem to a new generation of British musicians, where he made key records in the country’s pop transformation. As he devoted more time to running his own record label, Bang Records, Berns started the careers of future giants Van Morrison and Neil Diamond.

All the time Berns was making records, he was in a hurry. After falling ill with rheumatic fever as a teenager, Berns was told he wouldn’t live to see twenty-one. He didn’t even start in the record business until he was thirty-one years old, and once he started, success couldn’t come quick enough for him. He devoured his career. He vaulted from the ranks of the amateur into the highest realms of the music world in less
than two years, and his ambition never flagged. The ever-present damaged heart drove him relentlessly, as it filled his waking hours with the terror of death, fears he masked with a carefree, happy-go-lucky façade.
Tick . . . tick . . . tick
. Only a few intimates knew that Berns was standing on a trapdoor. It leaked into his songwriting. Other writers could employ the songwriting clichés around hearts without irony, but for Berns, these similes and metaphors were his life. The cries by his singers came from deep within Berns. He was a man with a bum ticker and he carried his doom like a cloak around his shoulders. For Berns to write
take it . . . take another little piece of my heart
was a plea straight from his life. When his own dark tragedy combined with the pathos of his music, his life took on epic dimensions.

At the end of his life, as the stakes rose sharply and events spiraled out of his control, Berns associated with big-time operators in organized crime, both personally and professionally. It caused a fissure in his world, but Berns was comfortable with these men and what they represented. He was a man who needed to take shortcuts. Threatened by a fatal catastrophe, surrounded by a world where moral boundaries blurred easily, Berns broke some eggs making omelets. In the end, his inflexible fate collided with his greatest aspirations and their frustration, a cataclysmic denouement of almost operatic grandeur.

How to Tell a Lie by Delphine Dryden
The Ice Princess by Camilla Läckberg
Shadows by Edna Buchanan
Federation Reborn 1: Battle Lines by Chris Hechtl
His Cure For Magic (Book 2) by M.R. Forbes
Connecting Strangers (Discovering Emily) by Rachel Carrington
At Your Service by Jen Malone
The Muse by Carr, Suzie
Billion Dollar Surprise: A Billionaire Romance by Green, Emilia
Squishy Taylor in Zero Gravity by Ailsa Wild
Our partner