Read Hero of the Pacific Online

Hero of the Pacific 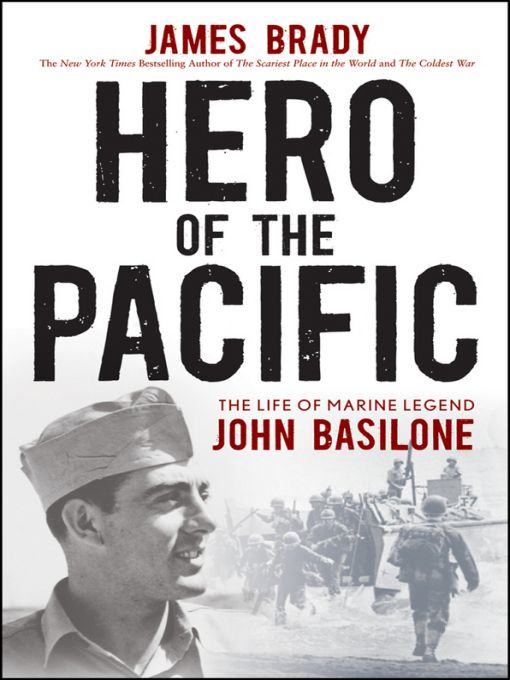 Copyright Â© 2010 by James Brady. All rights reserved
Â
Published by John Wiley & Sons, Inc., Hoboken, New Jersey
Published simultaneously in Canada
Â
Credits appear on page 243 amd constitute an extension of the copyright page.
Â
No part of this publication may be reproduced, stored in a retrieval system, or transmitted in any form or by any means, electronic, mechanical, photocopying, recording, scanning, or otherwise, except as permitted under Section 107 or 108 of the 1976 United States Copyright Act, without either the prior written permission of the Publisher, or authorization through payment of the appropriate per-copy fee to the Copyright Clearance Center, 222 Rosewood Drive, Danvers, MA 01923, (978) 750-8400, fax (978) 646-8600, or on the web at
www.copyright.com
. Requests to the Publisher for permission should be addressed to the Permissions Department, John Wiley & Sons, Inc., 111 River Street, Hoboken, NJ 07030, (201) 748-6011, fax (201) 748-6008, or online at
http://www.wiley.com/go/permissions
.
Â
Limit of Liability/Disclaimer of Warranty: While the publisher and the author have used their best efforts in preparing this book, they make no representations or warranties with respect to the accuracy or completeness of the contents of this book and specifically disclaim any implied warranties of merchantability or fitness for a particular purpose. No warranty may be created or extended by sales representatives or written sales materials. The advice and strategies contained herein may not be suitable for your situation. You should consult with a professional where appropriate. Neither the publisher nor the author shall be liable for any loss of profit or any other commercial damages, including but not limited to special, incidental, consequential, or other damages.
Â
For general information about our other products and services, please contact our Customer Care Department within the United States at (800) 762-2974, outside the United States at (317) 572-3993 or fax (317) 572-4002.
Â
Wiley also publishes its books in a variety of electronic formats. Some content that appears in print may not be available in electronic books. For more information about Wiley products, visit our web site at
www.wiley.com
.
Â
Library of Congress Cataloging-in-Publication Data:
Brady, James, date.
Hero of the Pacific : the life of Marine legend John Basilone / James Brady. p. cm.
Includes bibliographical references and index.
eISBN : 978-0-470-53555-4
1. Basilone, John, 1916-1945. 2. Medal of HonorâBiography. 3. United States. Marine CorpsâBiography. 4. Guadalcanal, Battle of, Solomon Islands, 1942-1943. 5. Iwo Jima, Battle of, Japan, 1945. 6. World War, 1939-1945âBiography. 7. MarinesâNew JerseyâBiography. 8. SoldiersâNew JerseyâBiography. 9. Raritan (N.J.)âBiography. I. Title.
VE25.B36B73 2009
940.54'5973092âdc22
[B]
2009015922
To all who put themselves in harm's way, especially the men and women of the United States Marine Corpsâthen, now, always.
Â
To absent friends and family, who are loved so well.
Â
And for Sarah, Joe, Nick, and Matthewâyour Pop Pop loves you so much!
Acknowledgments
The day after completing this book, Jim Brady died, suddenly and unexpectedly. Because he had not yet written the acknowledgments, we, his daughters, have done so for him.
Near the end of this book, our dad describes himself as “neither a scholar nor a historian, just another old newspaperman who once fought in a war.” This is true enough, and yet the statement is not entirely genuine. Jim Brady was a man fiercely proud of his bond with the Marine Corps and of the extraordinary experiences and friendships that he amassed over those six decades. He was also unabashedly delighted at having made a success in journalism. He grew up wanting to write and was a working writer to the last. As difficult as his loss has been for those of us left behind, there is a true sense of joy in knowing that he was doing what he absolutely loved right up to the end.
While our dad did not have the opportunity to compose his own thank-you list, he left stacks of notes and references. Clearly, a great many people gave generously of their time, knowledge, and insights. Some are mentioned in the text, while others remain unsung. Among those we would especially like to recognize are Stephen S. Power of John Wiley & Sons, who first proposed the idea of doing the book; USMC historian Robert Aquilina, who provided what our dad called a “Rosetta Stone of sorts” in primary-source materials from within the Corps' History Division at Quantico;
Leatherneck
magazine's executive editor, Colonel Walt Ford, USMC (Ret.); Colonel John Keenan, USMC (Ret.), editor of the
Marine Corps Gazette
; Colonel Bill White, USMC (Ret.); Raritan's John Pacifico, for his invaluable ad hoc reporting skills; the
Newark Star-Ledger's
Vinessa Ermino and Jeanette Rundquist; Marine Lou Piantadosi; and Marine Clinton Watters, John Basilone's best man. Sincere thanks to
all
who contributed to the making of this book.
Fiona Brady and Susan Konig
Marine platoon sergeant “Manila John” Basilone of Raritan, New Jersey, proudly wears the Congressional Medal of Honor, May 21, 1943. 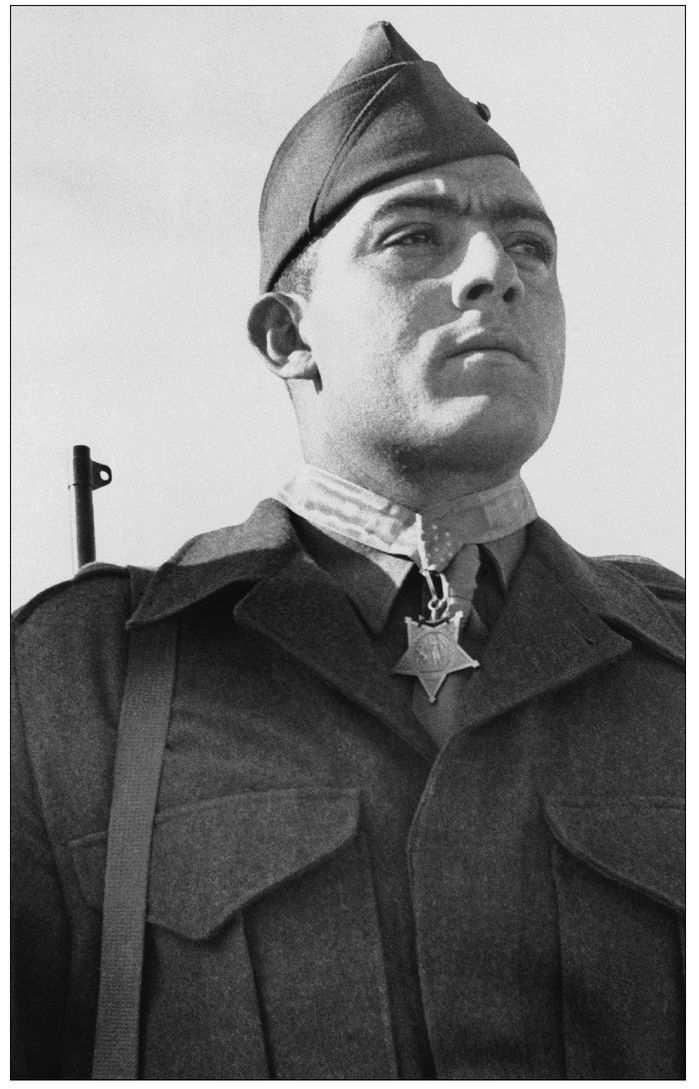 Prologue
Whatever the century, whatever the war, machine gunners have always been a different military breed, focused and lethal warriors armed with and operating a terrible weapon in a risky trade, very competent at killing en masse, pretty good at getting killed themselves.
F. Scott Fitzgerald, who came of age in the appalling slaughter that was then called the Great War, understood this, which may be why he made his iconic hero Jay Gatsby a machine gunner. We first learn about Gatsby's war as the mysterious but glamorous bootlegger reveals himself bit by tantalizing bit to narrator Nick Carraway while the two young men speed toward Manhattan in Gatsby's cream-colored roadster. Nick listens, fascinated, not sure just how to respond or what to believe, as Jay goes on in his strange, mannered style of speech:
“Then came the war, old sport.
“In the Argonne Forest I took two machine gun detachments so far forward that there was a half mile gap on either side of us where the infantry couldn't advance.
We stayed there two days and two nights, a hundred and thirty men and sixteen Lewis guns, and when the infantry came up at last they found the insignia of three German divisions among the piles of dead.
“I was promoted to be major and every Allied government gave me a decorationâeven Montenegro, little Montenegro down on the Adriatic Sea.”
A generation and a world war later, in the 1940s, another young roughneck of a machine gunner, not a character in a book but an actual Marine from Raritan, New Jersey, was similarly piling up the dead of famous enemy divisions before his guns. He would be awarded the most illustrious decoration for gallantry that we haveâthe Congressional Medal of Honorâfor what he did in the historic battle for Guadalcanal, and later, posthumously, the prized and nearly as rare Navy Cross, for his actions on the first day ashore at Iwo Jima. This man was Sergeant John Basilone.
Basilone was for several years during World War II one of the most recognizable celebrities in the country, a national hero and quite a famous manâyoung, laughing and roistering, unmarried and, in contemporary terms, quite sexy. Yet today, except among the hard men of the Marine Corps, which so reveres tradition, and in blue-collar, Italo-American Raritan, where the people of his hometown still tend the flame, few Americans could tell you who Basilone was or what he did in our desperate war against the Japanese in the Pacific.