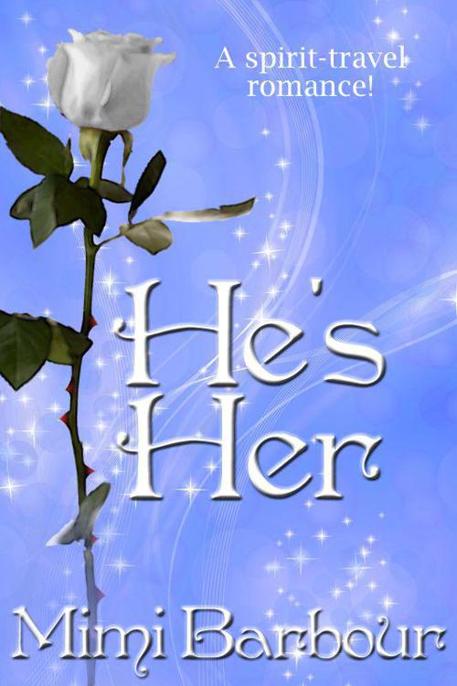 Praise for He’s Her

“I found the story line original and I love the focus on the distance that the characters travel—even some of the secondary ones. It’s tightly written with a crisp turn of phrase...quirky and sparky, and Ms. Barbour gets the mix right. And the end—well, it just made me want to go ‘Aaaaahhhhh...sweet!’ A great little story. Recommended.”
(Rating: Fantastic, Stays on Shelf)
~Vasiliki Scurfield, WRDF Reviews

“
He’s Her
is a fun read with a few twists and turns that make the characters endearing and even the gruff ‘Rhett’ worms his way into the reader’s heart. I was invested in these characters and couldn’t wait to see the end! I look forward to reading the other stories in the Vicarage Bench Series --do yourself a favour and pick up this fun, quick read.

(Next book in the Vicarage Bench Series)

“If we do this, there’ll be no turning back. Sweetheart, are you sure it’s what you want?” His frail voice wavered.

“I’ve never been more certain of anything in my life. I want to keep you with me—always. Please, please understand. You must.” The grey-haired woman, faded beauty in her weary face, leaned her slender form towards the pale travesty of a once vibrant man. The washed-out blue pyjamas he wore were typical hospital couture; not so was the luxurious navy velour robe that hung on his withered frame. In contrast, dressed in her stylish turquoise dress, the woman had a youthful heartiness and an innate vitality despite the tired lines around her eyes.

Her companion sighed, slapped his hands on his knees and nodded. “Right! We’ll leave as soon as we can make the arrangements. Each day my strength fails a little more. I don’t want to be a burden longer than necessary, and the doctors did warn us that the end would come quickly.”

“Darling, I’ve asked your brother to come, and he’s willing and ready to leave at a moment’s notice. He’ll be a strong arm to cling to, through everything.”

“Yes, it’s a good idea.” He leaned to tenderly caress the beloved face of the woman he’d adored for forty-seven wonderful years. “You’re still so beautiful, my wild rose.”

“And you’re still a silver-tongued devil.” She kissed him softly, lingeringly.

“Sweetheart, I must tell you. I feel a sense of relief in making this decision.”

“You do? I’m glad.” She gently patted his dear face.

He nodded, gazing into her eyes, his own full to the brim with tears. “It’s because I know now that I won’t be leaving you, after all.”

The tall, slim, well-endowed broad was strolling directly towards him. Damn! He didn’t want to share this bench with anyone else, even a classy chick like her. The last few hectic days had taken their toll. He needed to catch his breath and unwind. Alone!

She smiled and nodded to acknowledge him and continued to head toward the back of his bench, where a luxurious, fragrant bush full of wild roses spread its splendour. Rhett watched her slide tiny garden clippers from her shoulder bag. He supposed she was pilfering roses, and he wished she’d get on with it and leave him to his peaceful sanctuary. He heard a snipping sound, followed immediately by a whimper and a sucking noise as she babied what must be a wound. Feeling peevish, he ignored her.

This pretty spot, just in front of the timeworn vicarage and near a busy country lane, had become Rhett’s safe haven over the last few days as he organized and attended his father’s lonely funeral. The vicar, himself and his old man had been the only guests at the service. His father had wished to be buried in England, in the church cemetery near the vicarage close to where he’d grown up. Rhett decided to honour this last request, though why he felt it necessary was beyond him. The old guy had paid scant attention to his family, including Rhett, his oldest son. While Rhett was a boy, the old man ignored him. As the boy grew to be a man he reciprocated, and so they never had a close relationship.

Being an actor, making love to his leading ladies, and seeing his name in lights was all the fool cared about. Other than the ridiculous name bestowed on him, Rhett Parks inherited little else from the man who’d demanded to be called Father—never Dad.

“I’m sorry. I seem to have pricked myself. I feel slightly faint.” The intrusive woman stumbled toward the seat beside him and slumped onto it, letting her purse drop to the ground. Her rose, the instigator of the disruption, landed at his feet.

Without hesitation, he bent and picked up the stem, feeling a sharp prick in his thumb as he did so. His annoyance doubled.
Silly woman
was the last thought he had for some time.

“Mr. Parks? Sir? Oh, my goodness! Whatever has happened?” The vicar rushed over and tried to hold up the body of the collapsing man, an impossible task. The dead weight rolled over and landed in a heap on the grass beside the wooden bench. The clergyman turned to the white-faced woman, whose open eyes were fixed and empty. “Miss Temple? Miss Temple? Are you all right?” The vicar reached over and nudged Carrie’s shoulder.

“Ohhh!” Her head wobbled on her neck as she stirred.

A crowd had already gathered on the sidewalk, and the perplexed vicar, in need of assistance, gestured to several of the men to come over to the bench.

“What’s up, Vicar? What’s wrong with the bloke? Is Carrie all right?”

“Shush! Call an ambulance. Mr. Parks has collapsed. Miss Temple is coming around, but she’s ill, also. I don’t know what happened. I’d decided to take my afternoon stroll, as it were, when I came across these two sitting on the bench together. I couldn’t pass them by without saying hello, but before I had a chance to speak, Mr. Parks stiffened and moaned and started to fall over. I tried to catch him, but I couldn’t hold him. He’s a large man.” The vicar rambled on, his voice squeaking with nervous strain.

“Yes, Miss Temple, I can see that.” The vicar, pulled in two directions at once, dithered back and forth between the body of the man sprawled on the ground and the traumatized woman whom he’d known since she was a child. He ultimately settled on Carrie and sat on the bench beside the ashen girl. “You’re extremely pale, my dear, and you’re trembling.” He clutched her shaking hand and patted it consolingly. “I think you’re unwell, but don’t upset yourself, there’s an ambulance coming. Mr. Parks has passed out, and we need to get him help.”

A young man from the crowd bent over the fallen man and used his fingers to check the pulse in Rhett’s neck. He nodded to the vicar, whose expression lightened.

“I have not passed out. I’m right here. I’m...
What the hell is going on? How can I be here and my body be lying over there? Where am I?”
He looked down and saw a blue dress draped over the skinny knees in front of him. The hands he held up were slender, with long fingers and beautifully manicured nails. A small pinkie ring adorned one hand and flickered with the smallest diamond he’d ever seen.

“What in blazes is going on?” He could have sworn he’d bellowed out the words but the sound he made was weak and feminine and whined more than it roared. “Is this some kind of joke?”

“Not at all a joke, Miss Temple. Not for poor Mr. Parks, it isn’t. The man’s out cold and hasn’t moved a muscle since we found him.” The vicar was elderly and clearly disturbed. “Mr. Parks buried his father this morning, and I’m wondering if he isn’t suffering a form of grieving trauma. I thought him a cold, uncaring man at the graveside, but this teaches me a lesson. People suffer in many different ways.”

The approaching ambulance’s siren made talking difficult as it screeched to a stop in front of the bench. Two conscientious attendants bundled the fallen man onto a stretcher and carried him to the back of the ambulance. The vicar pranced alongside, providing the driver with the facts of the peculiar incident, embellishing them somewhat.

“Vicar, would it be possible for you to come with us to the hospital so you can describe to the doctors exactly what happened? Miss Carrie might appreciate your support, also.” The paramedic appealed to the vicar’s sense of responsibility toward one of his flock.

Candle Flame by Paul Doherty
Read Between the Lines by Jo Knowles
Rain Girl by Gabi Kreslehner
Flowers on the Water by Helen Scott Taylor
Lady of the English by Elizabeth Chadwick
Shattered World (Broken World Book 2) by Mary, Kate L.
Up in the Air by Walter Kirn
Chosen by the Alien Above Part 4: A Sci-Fi Alien Romance Serial by Nora Lane
Under Wraps by Hannah Jayne
Dragon's Ward by Newton, LeTeisha
Our partner