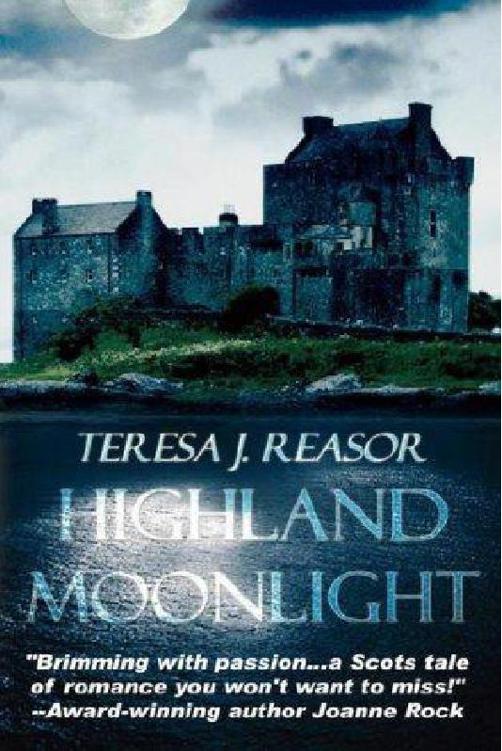 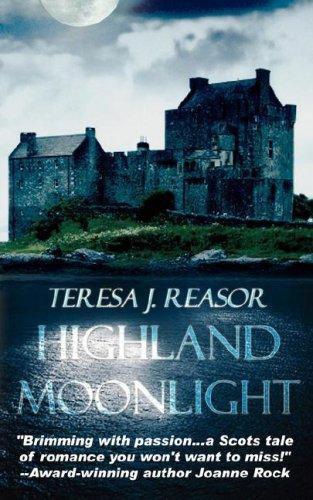 What people are saying about Teresa Reasor…

He kept his tone soft.

“Why did you offer me the bairn, Mary? I know you do not wish to be

“‘Tis better for him to be accepted into your clan than mine. He’ll have

the safety of a father to care for him, rather than a grandsire who will use

him or abuse him.”

“You know Collin well,” he said.

“Aye.” The huskiness of her tone tinted the word with pain.

Though she kept her head bent, he glimpsed her tear stained cheeks

and red nose. He eased closer, driven by a need to comfort her.

behind him. “He will be a Campbell and he will never have to know what ‘tis

to have a foot in two clans, and never truly belong to either. He’ll know what

‘tis to owe his loyalty to only one and be accepted without question.”

Something in her expression brought a tightness to Alexander’s chest.

“I do not wish to raise my son or daughter alone. A bairn needs its mother.”

Grasping her chin with his fingertips, he turned up her face. “Will you

allow your hate for me to deprive our child of your care and affection, as you

were deprived of your mother’s?”

his stomach with stones of guilt. “I did not wish to hate you, Alexander. I

wanted very much to care for you because you were to be my husband.”

The knowledge that she had meant to accept him, struck him with the

force of a battle-ax and he drew a deep breath.

She raised her chin. “‘Twas a lifetime ago when I was innocent

enough to trust you. ‘Twill not happen again.”

This is a work of fiction. Names, characters, places, and incidents are

either the product of the author’s imagination or are used fictitiously, and

any resemblance to actual persons living or dead, business

All rights reserved. No part of this book may be used or reproduced in

any manner whatsoever without written permission of the author or The

To my mother, who has unconditional faith in me in all my endeavors.

At the unexpected sound of booted steps in the narrow passageway,

Mary concealed herself in the rock wall’s craggy surface. The smell of peat

smoke hung acrid and strong in the confined space. With every breath, she

tasted it. Water trickled like perpetual rain from deep within the hillside. She

hoped its movement would cover the uneven sound of her breathing.

“Mary?” The sound of her name echoed through the cave.

his shoulders. Another man accompanied him, his face indiscernible in the

Bracing the weight of the crossbow against her hip, her fingers found

the trigger. She stepped from the shadows, careful to keep the fire between

Both turned at the sound of her voice. Recognition sent a tremor of

shock racing through her, and she stumbled back, swallowing a gasp. With

a practiced jerk, she leveled the crossbow at the larger of the two.

Her father threw out a hand stilling the man’s stride toward her.

“Loose the arrow, Mary, and you will have murdered an unarmed man,”

What purpose could he have in bringing Alexander to this place?

Almost as though he heard the thought, Collin said, “He has come to

She shook her head, amazed how obtuse her father could be. “Surely

you know that can not be done.”

“Aye, it can if you will allow it, Mary,” Alexander said, his deep voice

echoing through the chamber.

Those few words flayed her soul with promises that could not be. Her

throat grew tight and thick with instant tears. She blinked quickly to clear her

“You can not stay here alone much longer, lass,” Collin said.

“Not now you have seen fit to bring the likes of him about.” Her brittle

tone was rewarded by the fierce scowls of both men.

“I have signed the betrothal contract with Alexander. I have given my

oath. You will marry him.”

Overwhelmed by a sense of helplessness, she fell silent. If he were

any kind of father, he would not ask this of her. A panicked feeling of being

cornered raced through her. Her eyes searched the passageway behind

them. The bow dipped as she stepped closer to the dark opening at her left.

When no threat appeared, her gaze settled on the man responsible for

her plight. Heavy brows, the same dark chestnut as his hair, came together

in a fierce frown over a straight well-shaped nose. Thick auburn lashes

unusual. The generous curve of his bottom lip promised both humor and

passion. A heavy beard colored his lean jaw a rusty hue, underlining the

strong masculinity of his features.

A fresh wave of pain assaulted her just from looking at him. “You can

not expect me to abide by the contract now.”

“You are with child, Mary. He wants to be a father to the bairn.”

A short bark of bitter laughter broke from her. “Aye, he would.” She

drew a steadying breath and straightened her shoulders though she

trembled with a combination of reaction and cold. “I will not be his wife.”

“I signed the contract. You must honor it.”

“Nay! The contract be damned!”

Collin’s jaw tensed, his brows puckered in a severe frown. “The

marriage has been arranged to prevent a feud, Daughter.”

“A feud of your making not mine. ‘Twas you who started it, should be

you who ends it.”

“You will be shamed by bearing a child out of wedlock, Mary.”

“Do not talk to me of shame! ‘Twas you and your deceit that has

caused this!” She hated the defensive guilt that tormented her. How had

she ever thought he cared for her? How could she have trusted him with all

she had to offer? She shuddered, causing the bolt in the crossbow to jiggle.

“The child is mine, Mary. You can not deny me my rights as its sire.”

His jaw set, his dark auburn brows meshed into a fierce frown. The

masculine planes of his face held an undeniable strength and

determination, on other occasions, she had found almost beautiful. Now

to stand her ground.

Emotion held her silent a moment, her heart crying out against the

events that had brought her to this impasse. Her chin rose in open defiance

of him and his claims. “You are not my husband. You have no rights.”

Alexander’s lips thinned, drawing her attention to them for a moment.

Gentle memories brought fresh pain in their wake. He had tasted of

cinnamon and smelled of leather and wood smoke and man. She quashed

the thoughts before they could go any further.

Her attention shifted to her father, her distrust a living breathing thing

within her. A Campbell bastard beneath her father’s roof would be used

against her, or for his own purposes. She had known that from the first. She

would not see her child abused by him.

No matter how he had failed her, Alexander would not fail to protect the

child. Tears clogged her throat and for a moment pain threatened to

overwhelm her resolve. Her voice sounded hoarse. “You may have the bairn

in recompense for the contract.”

“You can not be serious, Mary!” Collin stared at her, his features blank

“Aye, I am serious, Father.” Her face felt stiff with the effort to retain her

chest. “If a father he wants to be, then I will let him be one.” She stepped

closer to the fire. “Let us see if he is as good a one as you have been these

many years past.” The enmity she felt for both of them lay like a stone in the

pit of her stomach. “You have both received what you came for, now leave.”

“We can not do that, Mary,” Alexander said. “You can not remain here.

‘Tis not good for you, or the bairn.”

She had given him her love, had shared her body without reservation,

and he had proven how little she had meant to him. How could he play the

Alexander’s lean jaw clenched. The scar along his cheekbone grew

white in the firelight.

“Do not pretend to be concerned for my well-being or the bairn’s. I

have learned well the ways of men since that night. Your only interest is

yourself, and what you can gain from this. Just as it is his.” She nodded

grimace of fierce displeasure. “You will come home with me.”

She ignored his attempt to intimidate her into submission. Even in this

he had not acted as a father, but the Chief of his clan. And once again, she

felt used and betrayed, just as she had that night. “I will not go with a man

so willing to hand me over to the likes of him.” She used the bow to point in

Alexander’s direction. “I shall go to the abbey and reside with the nuns until

the bairn is born. Afterwards, I will send the babe to Castle Lorne.”

She fastened her attention on her father. “You will leave me out of any

future plans you may have, Collin. From this day forward, I will owe you as

much loyalty as you have offered me in this matter, or any other.” She

swallowed against the tears threatening to overwhelm her. “Go now. I have

had enough of the both of you to last a lifetime.” Backing away, she slipped

into the chamber at the back of the cave. From the safety of the shadows,

she turned to watch the two men.

Collin grasped Alexander’s arm when he strode forward to follow her.

“She will kill you if she thinks you intend to touch her,” he warned. “She will

do as she has said. You shall have the child.”

Alexander had expected her resistance, but he had not expected Collin

to yield so easily to her wishes. He rubbed absently at the stubble along his

jaw, wondering how the MacLachlan chief hoped to use this to his

12 Hours In Paradise by Kathryn Berla
Bridge of Dreams by Bishop, Anne
Shadow Play by Katherine Sutcliffe
Can't Get Enough of You by Bette Ford
Bloodlines: Everything That Glitters by Green, Myunique C.
All the Light We Cannot See: A Novel by Anthony Doerr
Jodía Pavía (1525) by Arturo Pérez-Reverte
A_Wanted Man - Alana Matthews by Intrigue Romance
Quietly in Their Sleep by Donna Leon
Fairest of All by Valentino, Serena
Our partner