Read His Own Where Online 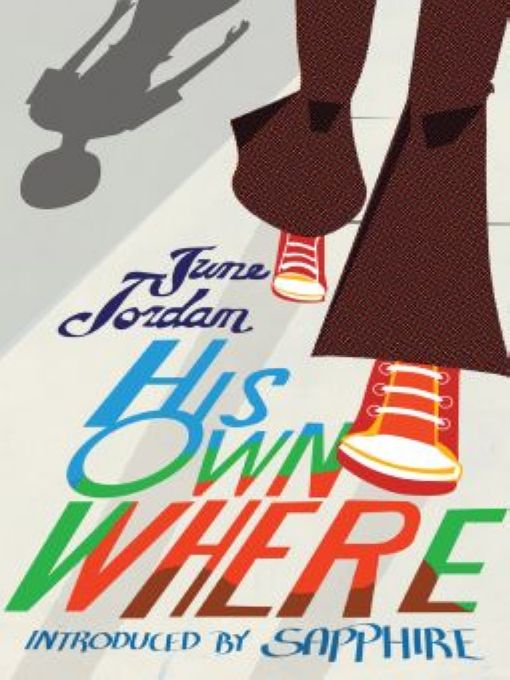 WITCHES, MIDWIVES, AND NURSES
A History of Women Healers
Second Edition
Barbara Ehrenreich and Deirdre English
WOMEN WHO KILL
With a new introduction by the author
Ann Jones
Great feminist books of the past fifty years don’t fade away. They become Contemporary Classics
. 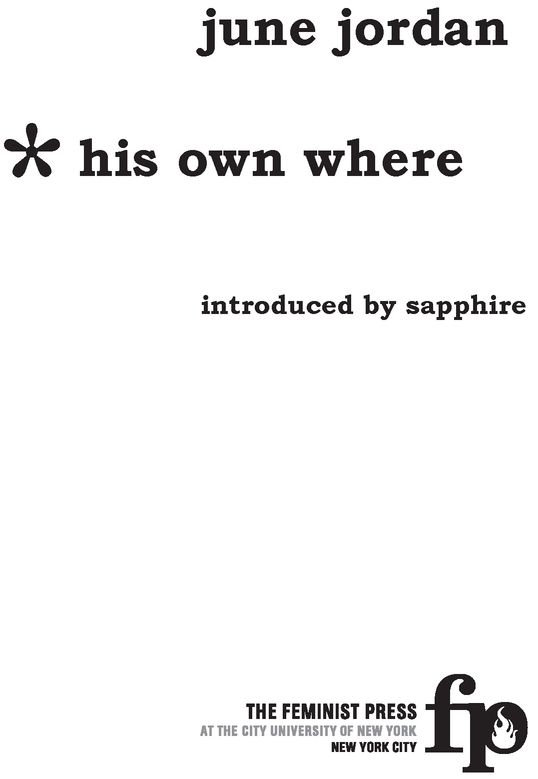 introducing june jordan’s
his own where

sapphire
“You be different from the dead,” says the young male protagonist in the first sentence of
His Own Where
, a wholly original novel written by June Jordan in 1971. Speaking in the language of the streets, and the larger language of the community that he comes from, he announces his ethnicity, class background, and urban environs in that first sentence by a uniquely African American use of the verb to be. His endangered status as a black man-child is also announced by revealing the magnitude of his bond with death even though he is still legally a child.
The three word title, the possessive form of he,
his
, is followed by another adjective, meaning belonging to oneself or itself,
own
, and it could logically be, but is not, followed by a noun, concrete or abstract, a thing or state of being, that is
his
. But we learn that what is his is a
where
, an adverb, describing at, or to what place. And it
is not long into the book that we learn that the only place of life for this young man is the country of the dead; “
his own where
” turns out to be a cemetery.
Ostensibly the plot is simple: young love beset by numerous obstacles, most noticeably race, class, and family structures, jeopardized from within and without. It is June Jordan’s use of language that makes this small novel a literary tour de force. Jordan wrestles with American English, flips it over her slim shoulder, and makes it serve her characters, Buddy and Angela, the challenged young lovers of
His Own Where
. If we say poetry is about language first and foremost, and I believe we can say that, then this novel rises above mere narrative from its very first pages. For example, on Angela’s first visit to the cemetery, to describe the girl’s discomfort at walking a long distance in uncomfortable shoes, June Jordan uses neither a character-driven interior monologue nor a heavy-handed explain-it-all omniscient narrator. She uses the literary device of a poet: “
b
lock after
b
lock after
b
lock
b
egin to
b
other her.” This alliterative sequence of nine words provides insight into Angela’s state of mind and her outer circumstances. It is more than a clever device; it is a powerful tool used by the emerging master poet June Jordan was to become.
Over and over June Jordan eschews typical narrative structure and relies on the tools of the
poet to further her narrative strategy and makes the sheer force of her poetics do what a different writer might need pages of prose to accomplish. For example, in a short chapter where she tries to explain his, Buddy’s, evolving love growing out from his singular attachment to his father to include Angela, June Jordan states, “his habits form him.” She goes on to say, “They [Buddy and Angela] become the heated habit of each other.” This heated habit of each other signifies their union, but it also signifies the actions, the erotic physical patterns, formed and repeated, which because of their formation and/or repetition, become heated.
That the only place for these young lovers to be, to celebrate life, and to procreate is in a cemetery is the true tragedy of this tiny yet epic novel.
From
His Own Where
written in 1971, June Jordan will go on to become a political essayist without peer, describing the American political landscape and psyche. Her poetry will become a “poetry for the people,” and she will develop a model for reading, writing, and teaching poetry for generations to come. She will publish twenty-eight books in her lifetime but she, and perhaps rightfully so, will never return to the linguistic and emotional landscape she visited with such pure wonder and language experiment as a new novelist. This makes
His Own Where
unique in her substantial oeuvre.
Let us celebrate this contemporary classic, with thanks to the Feminist Press and Amy Scholder, for bringing it back to life for a new generation of readers. And let us take in the vision and imagination of the late June Jordan, who ushered in a new language for capturing the American experience.
Brooklyn, New York
February 2010

the first page
you be different from the dead.
All them tombstones tearing up the ground, look like a little city, like a small Manhattan, not exactly. Here is not the same.
Here, you be bigger than the buildings, bigger than the little city. You be really different from the rest, the resting other ones.
Moved in his arms, she make him feel like smiling. Him, his head an Afro-bush spread free beside the stones, headstones thinning in the heavy air. Him, a ready father, a public lover, privately at last alone with her, with Angela, a half an hour walk from the hallway where they start out to hold themselves together in the noisy darkness, kissing, kissed him, kissed her, kissing.
Cemetery let them lie there belly close, their shoulders now undressed down to the color of the heat they feel, in lying close, their legs a strong disturbing of the dust. His own where, own place for loving made for making love, the cemetery where nobody guard the dead.

one
first time they come,
he simply say, “Come on.” He tell her they are going not too far away. She go along not worrying about the heelstrap pinching at her skin, but worrying about the conversation. Long walks take some talking. Otherwise it be embarrassing just side by side embarrassing.
Buddy stay quiet, walking pretty fast, but every step right next to her. They trip together like a natural sliding down the street.
Block after block after block begin to bother her. Nothing familiar is left. The neighborhood is changing. Strangers watch them from the windows.
Angela looking at Buddy, look at his shoes and wish for summertime and beaches when his body, ankle, toes will shock the ocean, yelling loud and laughing hard and wasting no sand.
Buddy think about time and the slowspeed of her eyes that leave him hungry, nervous, big and quick. Slide by the closedup drugstore, cross under the train, run the redlight, circle past two women leaning on two wire carts, and reach the avenue of showrooms. Green, blue, yellow, orange
cars driving through, cars at the curb, cars behind the glass, cars where houses used to stand, cars where people standing now, and tree to tree electric lights.
“Play the radio?”
Buddy turn it with his thumb. The plastic handle strings around his wrist.
No moon no more
No moon no more
I want to see what I seen before.
Please no surprise
Please no surprise
I just want to see your lovin eyes.

The Claiming of Sasha [Panther Cove 4] (Siren Publishing Ménage Everlasting) by Melody Snow Monroe
Earthborn (Homecoming) by Orson Scott Card
The Satanic Verses by Salman Rushdie
Ting-A-Ling by Faricy, Mike
Fiend by Harold Schechter
Adduné - the Vampire's Game by Wendy Potocki
The Cat, the Wife and the Weapon: A Cats in Trouble Mystery by Leann Sweeney
STARGATE SG-1 29 Hall of the Two Truths by Susannah Parker Sinard
Lost in a Stallion's Arms (Kimani Romance) by Deborah Fletcher Mello
Mama B - A Time to Dance (Book 2) by Stimpson, Michelle
Our partner