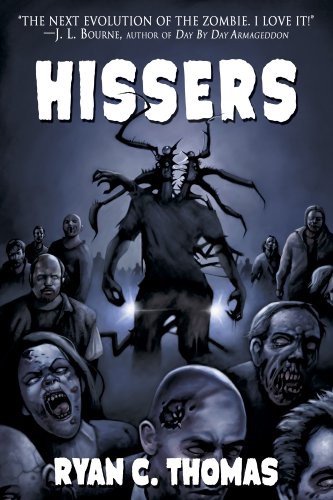 Lieutenant General Winston W. Davis, U.S. Marine Corps Special Projects Division, turned away from the video monitor with his mouth agape and his eyes wide. If he were alone he would have attempted a tap dance, but as he was not, he settled on a universal four letter expletive that conveyed his sudden excitement. What he’d just seen was going to revolutionize the world. It was going to revive long overdue fear in those damn bomb-loving camel-jockeys over there in the Middle Eastern sand pits of hell. Once again, America would raise its mighty democratic fist like it had in World War I and World War II. It would make the dictatorial lunatics in North Korea, China, Cuba, Somalia — you name it — think twice before even joking about America’s demise. It was the scientific breakthrough of the century. Hell, it was so brilliant he was still having troubling believing it.

Behind him the flatscreen monitor turned off. An after-image of a wounded soldier lying in a sterile hospital room some four floors below ground level faded to black. He flashed a smile at Dr. Haley.

She returned the smile, her hands behind her back. “It’s not perfected,” she said. “But we’re getting close, real close. In fact even
I
was surprised at this latest progress. But I assume you know the adage about horseshoes and hand grenades.” She raised her eyebrows and waited.

“So, we had to use an aggressive and modified strain

of Lyssavirus, combined with a crotoxin to contain the protein.”

“Crotoxin. Drawn from the venom of a South American Pit viper. It inhibits immune and inflammatory reactions, which is necessary to block any transplant rejection. It was all that would work. But, the downside—”

“The crotoxin is also neurotoxic. So if and when we perfect this drug, there will be a neural invasive side effect. You’ll need a
second
drug administered to combat that effect.”

Davis was lost. “Okay, wait. Back up. Explain the Lyssa thing?”

“Lyssavirus. Otherwise known as rabies. But it’s been modified so—”

“No, not exactly. As I was saying, we’ve altered the virus considerably, added some of our own synthesized strands. This is the only way we can wrap up the proteins, get them into the body without instigating cellular death. You understand this is a very tricky bit of medicine you have us creating. Once the serum is injected, the virus breaks off. The proteins attack the wounded area of the subject and do their job. The new virus makes its way to the brain but—”

“Okay okay okay, I get it, we’re back to needing a second drug. No big deal. What’s the gist here?” He pointed to the black monitor. “Obviously it’s working.”

“It’s starting to, yes. That boy you saw is our first brush with success. The proteins are like an incredible superglue. Tissue will accept tissue at an alarming rate. But the virus, the RNA strands—”

Just then Davis’ phone rang. He waved her off, answered it, said yes and no a few times and hung up. “Sorry. My wife. Told her not to call now but she’s planning a dinner party. Look, this is all making my head hurt, just tell me you’re getting results and I’m happy.”

“Perfect! Now, when I called you said you needed to talk business with me. What’s that about?”

Dr. Haley nodded. “We need more money. The research has hit a couple of walls and—”

“Walls?” Davis’ smile shrank back to a thin, determined line hidden under a graying mustache. “From what I just saw I’d say you leapt over a lot of walls. What kind of—”

“Unforeseen genetic anomalies. You have to understand we started on mice and cats, which is routine, so we allow for several negatives when we employ our tests on control subjects.”

“And this subject… he’s a negative? I thought you just said—”

“The secondary reaction was a negative, but an expected one.”

“Expected enough. We anticipated hitting some snags once we moved to human subjects. Such results are common in this type of research. We plan for them. It’s how we perfect the process. We can iron them out in time.”

“Well, it depends on the funding. Which brings me back to the point of my original statement. Give us what we need and we’ll get back to work immediately. Who knows? A year, two years tops.”

It was Davis’ turn to raise his eyebrows. “Two
years
? That long?”

“This is a delicate and untested procedure. You should be thrilled at how far we’ve already come. Two years more to deliver perfection is not much time in the long run.”

“Says you. Black market chatter is rife with talk of the H-bomb. Not dirty bombs, you hear, full-on
nuclear devices
. We’re gonna see more action in the deserts of hell before my next birthday. I’m telling you, you don’t know how these psychos fight. Not like us. These idiots
want
to die. If they can blow us all to hell with an H-bomb strapped to their hairy-ass chests they sure as fuck will.” Davis took off his hat and ran his hands through his hair. “If I put in for the money can you rush it?”

“Maybe. We’d still have to go through all the red tape before we can hand it over. Hell, the bid alone took us almost a year with the way you guys need everything signed in triplicate.”

Davis laughed. “Don’t hang that on me. I don’t deal in signatures and photocopies. I deal in finding the right people to build me the shit I need built so I can make it safe for Mr. and Mrs. Smith to walk their dog in the park without fear of some Allah-humping towelhead blowing them into kibbles and bits.”

“You do realize not all Muslims blow people up. I’ve worked with many Muslims in my time. They’re good people.”

“Tell me that after you spend a year in Afghanistan. Anyway, it’s our money so we can expedite the process if we see fit. I can promise you if you can get this working properly—” he pointed to the blank monitor screen. “We’ll take care of the red tape. Tell me, the soldier in the video… I couldn’t help but notice the, um, arm.It moved.”

“It surprised us all. There was a spontaneous grafting, an acceptance of foreign tissue without positive matching. About as uncommon as it gets. Which proves the serum is working. If this wasn’t top secret, it’d be the top news story in every medical journal. He’s being monitored.”

“He looked beyond sick. Will he die?”

Dr. Haley took a moment to study her shoes. When she looked up there seemed to be new lines in her face. “We’re not sure. For now all we can do it keep up the tests. We’ve altered the ratio of ingredients in the cocktail again and are planning to give him a new injection in two days.”

“Yes, I’m still working on it around the clock. The subject’s brain chemistry was affected beyond our assumptions. Much like the arm.”

Dr. Haley put her left arm forward. She was holding a disc. “As you requested. But please tell your superiors these are just hypothetical prognoses until we fix the current issues.”

Davis took the disc, flipped it over. “I’ll do that. Look, I’m gonna make a call. I want my bosses to get over here and see this stuff in action. I think they should see the video of the cat, too.” He took out his cell phone again and spoke for a minute to someone on the other end. Dr. Haley waited patiently, occasionally tapping her foot. Finally Davis hung up and said, “Well, I told them what I saw. They’re excited like pigs in shit, but there’s been a change of plans. They want you to come to Washington.”

“You and your team. And the…” he pointed at the dark video monitor.

Dr. Haley shook her head emphatically. “No way, I can’t move that boy.”

equipment, the cocktail. They want you to show it to them in person.”

“
What?
I don’t have the right equipment to transport it. It’s not safe. Tell them to come here.”

“I already suggested that. You heard me with them. They said no. I don’t question them and I
sure as hell
don’t disobey them. They want to watch it work in person. I assume they’ll supply a lab mouse or whatever it is you need. They’re arranging a plane now.”

“What?! General Davis, I appreciate—”

“I appreciate the honor of wanting to be seen by your superiors but I am not prepared to go to Washington nor can I just test this on anyone or anything. It takes days to set it all up. It’s extremely fragile and needs a sterile environment with proper temperature control and—”

Davis waved her off. “Look, Doctor, I appreciate your dilemma but all you have to do is show them the video, maybe some tissue samples, a bit of the medicine under a microscope, and inject some in a damn rodent in front of them and you’ll walk out of there with a blank check with your name on it. I guarantee it. If you want the additional funding — because they can still go to someone else — this is how you’re gonna get it. A couple of days of your life to show them, in person, what you have. I’ll even pay for the pizza and beer afterward. Just don’t tell my wife, she gets suspicious.” He chuckled but the joke was lost in the ensuing silence.

Dr. Haley looked at the black monitor behind the man in the dark green suit, thought of the young soldier they’d just been watching. He still hadn’t recovered from the abnormalities, and sometimes at night she could hear his moans. It didn’t matter that he’d signed up for the trial, was warned there were risks, he was
still
human and it
still
bothered her. There was, however, so much research yet to be completed before this project could be finalized.

And she needed the funding to do it so losing the account was not an option. Besides, if she was going to help cure the boy in the subbasement below her, she needed to appease the investors ASAP. In the end it would help untold numbers of American soldiers recover from the horrors of war. Wasn’t that why her team had bid on this account in the first place?

Sometimes the bottom line justified the anguish of experimentation and violation of human life.
Right?

Connor heard the howling engine and sinister laughter and realized he was in danger. He pedaled his bike closer to the curb, his muscles going rope tight, bracing for the car to clip him and send him spiraling into the trees. He’d no doubt connect with a thick, jagged branch and explode in a pink mist of entrails and bone shards. By the time he looked back, adrenaline coursing through his chest, the dented and dirt-covered Camry’s dark blue hood was already kissing the back tire of his bike.