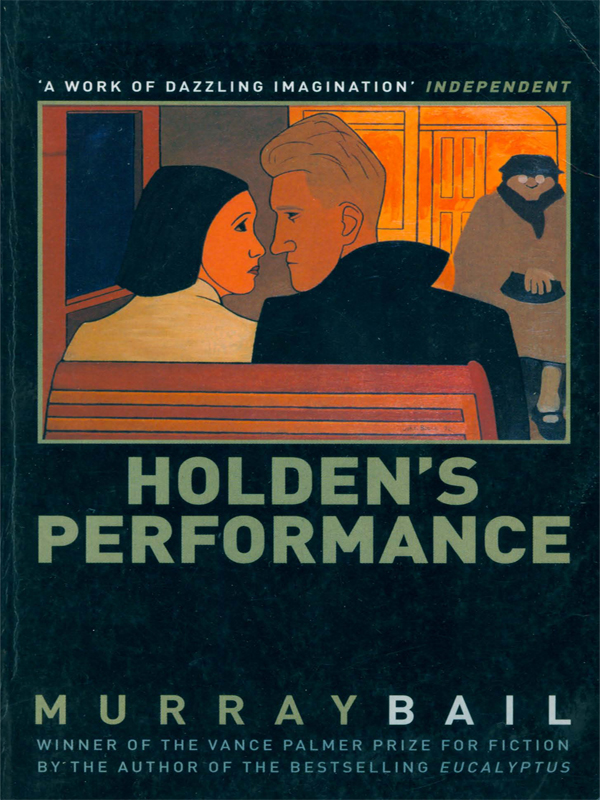 WINNER OF THE VANCE PALMER PRIZE FOR FICTION

âThis is a very amusing book. It is also well written, ironic and wiseâ¦
Holden's Performance
is a success, no doubt about it.'
Peter Corris,
Sydney Morning Herald

âBail is a writer of great talent and extraordinary concentration.'
Peter Craven,
Age

âHolden's Performance
can be placed with
Catcher in the Rye
in the tradition of Bildungsroman, the heroes of which stand in for artist-author.'
Island

âThis surreal novel is a kind of picaresque of the 1950s and '60s of Australiaâ¦Historical time provides few barriers to this free-flowing novel, in which Bail has fun with Australian archetypes and captures the flavour of several cities.'
Weekend Australian

Born in Adelaide in 1941, Murray Bail now lives in Sydney. His fiction, which includes
The Pages, Eucalyptus, Homesickness
and
The Drover's Wife and Other Stories
, has won a number of major awards. He has also written two works of non-fiction,
Ian Fairweather
and
Longhand: A Writer's Notebook
.

Printed and bound by Griffin Press

Cover painting of
The Tram
by John Brack is reproduced by kind permission of the artist, transparency courtesy of the National Gallery of Victoria. John Brack 1920â1999.
The Tram
1952. Oil on canvas 60.0 Ã 81.0 cm. Private collection. Â©John Brack 1952

W
hen the last of the city's trams were removed with their poles and bells and the industrial paraphernalia of lines imposed on the mind's eye, it was as though a great net had been lifted clear of the city, letting in light. The trams had been inflicting all kinds of untold damage, running amok at will. Anyone living there beyond a certain length of time was in danger of becoming marked, ruled by inner grooves.

Day after day, for years on end, the heavy oblong shapes had been lumbering backwards and forwards across the field of vision and conversations, or there'd be one travelling away in an absolute straight line, its pole waving, demonstrating the laws of perspective, which is how they entered the souls of generations.

It was a small city and flat. There could be no escaping the trams.

On summer nights it seemed as if the sky had been lowered to a false ceiling joined to the earth by a monopoly of constantly moving poles, emitting at set intervals their own brand of pale blue lightning.

All this had been going on for as long as anyone could remember, and no one thought much about it.

The city was laid out along the lines of a timetable. There were no hairpins or dog-legs, no French curves or crescents; diagonals were few and far between. Mondrian would have been pleased. It was a city based on the original grid pattern laid down by the first surveyor, a tall colonel who'd come out all the way from England and knew where to place his knife and fork. Under the circumstances he was incongruously named LightâColonel William Light. When the burghers muttered and sniffed in their balloons about the subversive elements or society's fabric, and other hot air, they should have looked at the directions of the streets and the presence of the trams. Instead, out of gratitude they had Light cast in bronze, and there he stands on a piece of high ground, a dunghill, the favourite of pigeons, one arm and forefinger pointing down to his regimented folly, Adelaide.

Other cities have a tralatitious effect on the people inhabiting them. Paris, constructed around glass and the melange of pavement cafe tables, where pedestrians allow themselves to be analysed from every angle, led naturally to the invention of Cubism, to the pre-eminence of Paris in the fields of haughty couture, love, vanity and selfishness. And northern Italian cities and towns: their medieval congestion breaking into sunlit piazzas channels those sudden outbursts of histrionic rhetoric, and the myth of the Italian tenor. There are other examplesâ¦

And in Adelaide, encouraged by the puritanical streets, the brown trams always went forward in straight lines, scattering traffic and pedestrians like minor objections or side-issues, and somehow this suggested the overwhelming logic
of plain thinking
. There always seemed to be a tram opening up a clear path to the distant goal of Truth. And so the people developed a certain ponderousness, a kind of nasal pendanticism; whole suburbs displayed maniacal obsessions with Methodism, with lawn manicure and precision hedge-cutting. These were a people who spoke slowly and distinctly, making frequent stops. There was a yes and a no, a right and a wrong. They liked to begin their sentences patiently with âLookâ¦'. The real facts and direction of things, look, lay out in front: anyone could see that. They prided themselves on plain thinking. Personal anecdotes were trundled out from memory-sheds as evidence. Subtleties, complications and deviations were seen as unnecessary obstructions. And so talent here was brief: the spurt of a night tram between stops.

With the removal of the trams in the 1950s the light was for a time blinding. A spaciousness returned to the city and the thoughts of the people; but it was too late. The martyrs had been the atheists, drunkards and determined divorcees, the motorbike gangs on the edges, women who wore red shoes (and men who wore suede shoes), the petty crims and flashers, and the rare deviants like that brylcreemed bank-teller with the tan briefcase who became famous locally for his practice of stepping off the No. 19 long before it stopped, avoiding the forest of onrushing poles, parking meters, fire hydrants and pedestrians, somehow keeping his balance, going on at a tilting half-run, as if the illuminated monster braking alongside had nothing to do with him. Such people were glanced at and thought of as âcharacters'.

Holden had never met his grandfather with the pale, speckled eyes. His sole contact was through a few photos handtinted in vibrating pinks and greens, courtesy Gyppo processing. His grandfather had been one of Adelaide's early escapees. A funny name,
Shadbolt
. It conjures upâ¦Etymology has this to say. It's Old English:
Shad
is from Shade, and
bolt
a local (nth. Eng.) reduction of bold or bottle, more than likely the latter. In those early days in Adelaide, days of vacant straw-coloured blocks, dry hedges and hum, Lance Shadbolt developed a thirst for, a deep hankering after, general knowledge and the bottle; was easily browned off. Instead of a silver spoon in his mouth he was born with a harelip. It's vaguely visible there in the smaller snapshot, the blur as if he's licking his nose. And yet after a certain age it didn't spoil his appearance. It gave him character.

In 1915 Lance Shadbolt signed up for the Australian Light Horse Brigade, leaving the missus and the kids bawling on the splintered wharf. Filing onto the bulging troopship and leaning over the rails were many jug-eared volunteers, ratbags who didn't give a fuck about the Empire, but were hellbent on escaping the straight and narrow of Adelaide and the wheat plains beyond; already they were horsing around, grinning and whistling, pulling faces, etc. The entire ship seemed to be in shade. Only the knitted nets draped over the steaming flanks bore any resemblance to the city they were leaving. The rest suggested chaos, chance and impending catastrophe.

The snapshots were taken a year later: Suntanned Lance-Corporal Lance Shadbolt facing the camera, head turned slightly away, a bucket in each hand. Khaki slouch hatâwrinkled khaki shirt with epaulettesâBombay Bloomers. Lousy photographer whoever he was: the Egyptian horizon is tilted like the side of one of the pyramids, and Shadbolt is sliced off at the ankles. He's squinting. A silent-looking man. The earth here is as bare as Simpson's Desert. In indelible (pre-biro) puce verso: â3.8.16â carrying in the evening meal.'

The second shot has more sand. Grandfather Shadbolt is astride a donkey on an empty beach, one arm dangling at side. His boots are almost touching the ground. A low wave is breaking behind the pair of them. Shadbolt is again unsmiling. Faint suggestion of harelip. Donkey is smiling. Written verso for the family: âHope you can distinguish which is which.'

Ha ha. Lance was evidently quite a card.

In his brief time away he saw the pitted Sphinx, child beggars and the death of thirty-four stock horses, papyrus and bent women scratching dry soil; camels with saddle sores, prisoners-of-war, Singer sewing machine after a direct hit by a shell; saw belly-dancing, the kasbah, grey scorpions in British tobacco tins, and a birth on the footpath. He saw very good Arab stallions. Bearded men banged their foreheads in tiled mosques. Almond eyes above veils. Orange trees. Confusing rigmarole of an unknown but strangely widespread language. Fantastic bloody sunsets; he saw with his own two eyes the longest river on earth: dhows, shadoof and a ramshackle dababeeyah. Porous walls of mud and straw. Unnatural acts unfit for print; and dilapidation, dilapidation.

He was sometimes flooded with an unaccountable nostalgia for nothing in particular, nothing at all. It seemed as if he didn't exist. Nobody in Egypt took any notice of him. At an oasis sou'west of Gamli, as he watered the horses early one evening, 1917, two shells exploded in the space of a frown: palms, shadows, legs and the silver water erupted. Covered in sand and horses' intestines Lance touched his face. He was thirty-nine. A second harelip had formed, splitting his nose. His ear and drum were also pierced. A faint pain spread out from his heart when he moved.

As small as a gold-filling: too small and close to the semi-lunar valves in those days to use the knife. Slowly Shadbolt died on a cane
chaise longue
at the Repat Hospital, North Adelaide. It took several years. From over the long immaculate hedge came the trundling of the trams, ironwheeled and regular, and the chirping of sparrows. His only advice to his son was shortly before he died, a whisper above a tram. âIf you ever get into this filthy business [desert warfare], put a tin of tobacco over your ticker.'

Staring at his father, Reg Shadbolt remained dry-eyed. He had no intention of smoking. He was still in shorts. Things wouldn't be easy from now on, that was sure. Already his mother had a loose stocking. She had the look of someone out of luck, singled out. In his confusion Reg felt a seepage of anger with his father and the invisible forces that had transported him away at long angles, and intersected at some distant isolated place. There and then he decided he wouldn't be signing up for any wars and leaving what he knew, namely the patterns and the rhythms of Adelaide.

Fire from the Rock by Sharon Draper
Statistics for Dummies by Deborah Jean Rumsey
Microsoft Word - Jacks-Marcy-The-Spirit-Within.doc by OWNER
Welcome to the Monkey House: The Special Edition by Kurt Vonnegut,Gregory D. Sumner
Under Hell's Watchful Eye by Sowder, Kindra
The House of Women by Alison Taylor
Our Daily Bread by Lauren B. Davis
Critical Mass by Sara Paretsky
Sword of Jashan (Book 2) by Anne Marie Lutz
The Courier's New Bicycle by Kim Westwood
Our partner