Read HOMELAND: Falling Down (Part 1 of the HOMELAND Series) Online

HOMELAND: Falling Down (Part 1 of the HOMELAND Series) 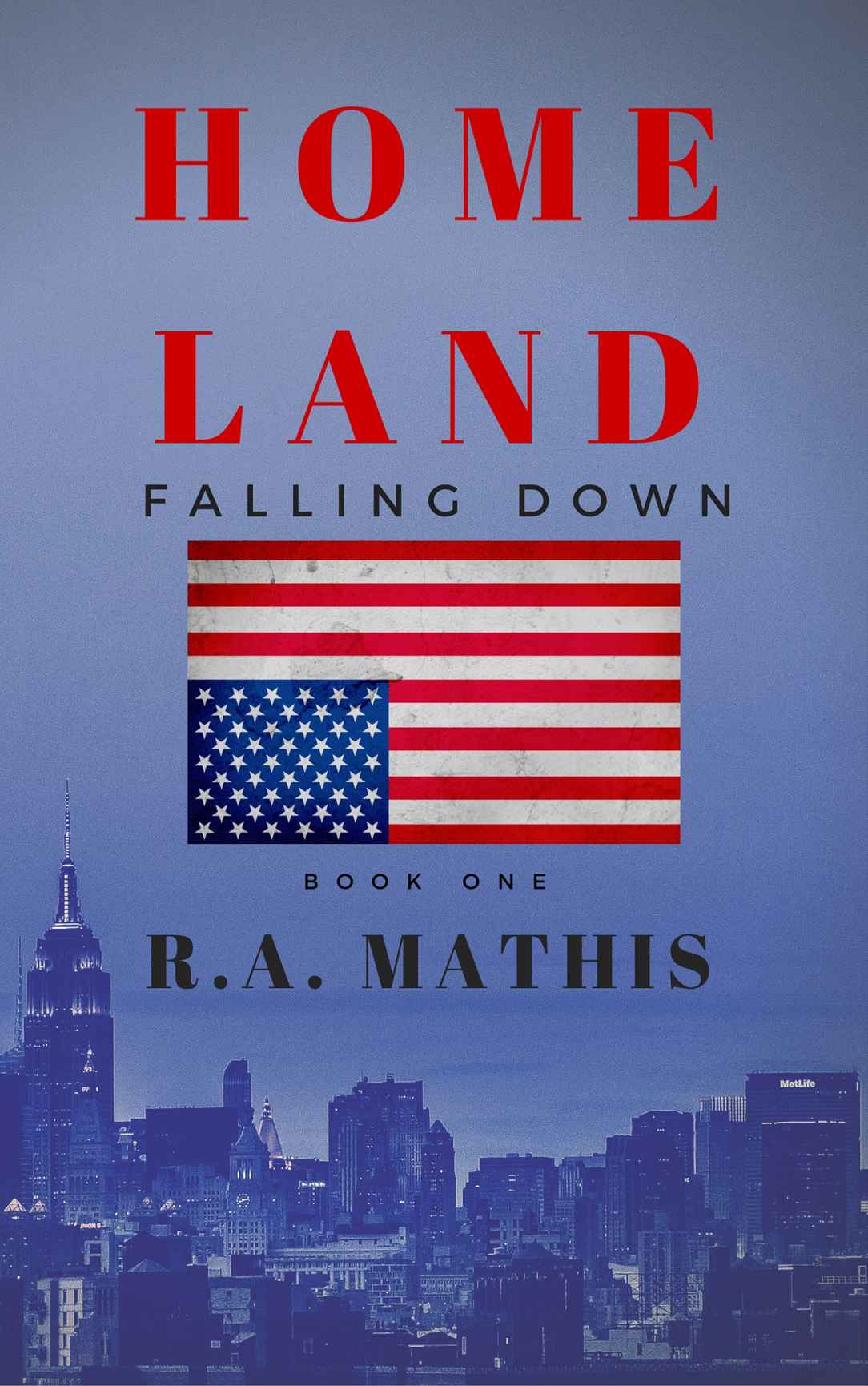 Part One: Falling Down

Thank you to my wonderful friends and beta readers, Gene, Claire, Steve, and Sam. I couldn’t have done this without you.

In addition, thank you, as always, to my wonderful family for your help, love, encouragement, and support.

“
In the end, more than freedom, they wanted security. They wanted a comfortable life, and they lost it all – security, comfort, and freedom. When the Athenians finally wanted not to give to society but for society to give to them, when the freedom they wished for most was freedom from responsibility, then Athens ceased to be free and was never free again.”

The Nature of the Beast

Eight Days before the Presidential Election

The young man stood on the far left of the crowd gathered in front of the State Capitol Building, as he was instructed to do. He had been there for hours. Waiting. Preparing.

It was almost time.

The unseasonably frigid autumn air made him shiver in spite of the dirty military surplus coat he wore. Unkempt hair poked from his woolen cap and ran down his cheeks to form a scraggly beard. A boyish brow framed dark, merciless eyes.

His shaggy appearance contrasted that of the crowd of typical bourgeoisie types, well dressed, middle-class, clean-cut. Some had their kids with them, bundled up snuggly against the cold. Thousands of them filled the frigid Capitol grounds. They were here to see one person, the person he came to kill.

Cheers and campaign chants filled the icy air as the excitement grew. Finally, an attractive woman in a thick coat and scarf stepped up to the outdoor podium in front of the gathering. She droned on and on about the Founding Fathers, tossing in a quote from one of them with every other breath. She was Congresswoman Martha Jefferson, freshman member of the House of Representatives on the newly formed Constitutional Party ticket.

“We are being lulled to sleep,” she said, her breath an ethereal vapor in the wintry air. “The media ignores injustice and covers up scandals within our corrupt government. Instead, they serve us stories about celebrities and sports teams disguised as real news and we eat it up and ask for more.” The crowd was silent, hanging on her every word. “Our nation is on the verge of bankruptcy, and we sleep. The educational system turns our children against the heroes and virtues that made America great, and we sleep. Government policies and pop culture destroy our families. The police are militarized. Our communications are monitored. Our every move is watched as our rights are stripped from us one by one. And we sleep. Our very civilization is on the verge of collapse. And yet we sleep!” Her eyes locked onto her audience. “But we cannot sleep anymore. We must wake up! Wake up to the intentions of those who seek to destroy our republic. Wake up and halt our nation’s drift into tyranny. Wake up before our children became slaves to the State!”

The crowd cheered in agreement.

Jefferson’s delivery was polished and charismatic. Her people were primed for the call to action.

“Boycott the media. Reclaim our educational system. Refuse to vote for establishment candidates. Educate your friends and neighbors before it’s too late.” She paused. “But the biggest thing I ask of you today is your help.  I know that we are leading in every poll, but Election Day is still more than a week away. A lot can happen between now and then. Now is not a time to rest. It is a time for action. It’s going to take every one of us to get the job done, but we can do it together. And with your help, I am going to be the next President of the United States!”

The crowd erupted into raucous applause.

Jefferson raised a hand to still the multitude. “In closing, I will defer once again to our founders. E Pluribus Unum. From many, one. They knew that our greatest strength is and always will be our unity. It is only when we come together as one that we are truly the
United
States. Thank you. God bless you all and God bless America.”

Jefferson turned to her right and exited the stage, shaking hands with exuberant supporters as she went.

The young man elbowed his way through the devotees, moving into Jefferson’s path until almost within arm’s reach. His hand slipped into his coat.

Jefferson looked to him, still smiling. She reached to shake his hand.

Campaign cheers turned to primal screams as people fought to escape the gunman.

Blood spattered the congresswoman’s face. An aid fell to the ground next to her, gore pouring from his chest and neck.

A body guard shoved Jefferson to the ground with violent urgency.

Hands from the crowd clawed at the young man’s arm as he tried to aim his revolver for another shot.

Another body fell—a woman in a ‘Jefferson for President’ sweatshirt this time.

The assassin went to the ground, tackled from behind by a muscular state trooper.

More body guards rushed Jefferson into a nearby car, shut the door and pound the roof. Tires squealed as the vehicle sped to safety.

The shooter wrestled free of the trooper as more police arrived. His quarry was gone. There was no escape. He had one bullet left.

He put the pistol to his head and proclaimed, “Long live the revolution!”

He pulled the trigger. His lifeless body crumpled to the frozen ground, steam rising from the bloody hole in his temple.

“Search him!” a senior policeman ordered.

Two officers rushed up and opened the killer’s jacket.

“No bombs!” one of the searchers called out.

The other officer rifled through the assassin’s pockets. All were empty except for one. In it he found a few dollars, a Vanderbilt University student ID, and a little green book.

The officer examined the book. It was about the size of a pocket Testament and worn from heavy reading. Handwritten notes and highlighted passages littered its thin, dog-eared pages. A rubber band marked a page with the underlined quote,

‘
There is only one way to shorten the death rattles of the old world and hasten the bloody birth pangs of the new—revolutionary terror.
’

The officer closed the booklet and examined the cover. Faded letters across the stained, dingy, emerald cover spelled out the title,

The dust was everywhere. In his ears. In his eyes. In his clothes. In his mouth.

Eduardo took a swig of bottled water. The lukewarm stuff tasted more like bath water. He swished it around his mouth to get the grit out of his teeth and spat it onto the parched ground.

“Thirty seconds,” a potbellied camera man said as he perched his sunglasses on the bill of his ball cap and raised the camera to his eye.

Eduardo stood in front of what passed for a hospital in refugee camps like this one. A cluster of dirty tents stood adjacent to piles of bloody linens. Severed limbs soaked the sand red.

Eduardo grabbed a little girl as she passed by and put his arm around her.

“You’re on,” the camera man mouthed through his scraggly salt and pepper beard.

With one hand on the girl’s shoulder and the other grasping a microphone, Eduardo began his report.

“As the fighting continues here in Syria, the human toll grows larger each day. I’m here in one of the many refugee camps scattered across the country.”

He pointed to the tents behind him. “Medical staff, many of them volunteers from around the world, are overwhelmed by the volume of civilian casualties.”

He knelt by the girl. “This is Sabeen. Her family was killed this morning in the crossfire between U.S. troops and Islamist insurgents. She is the only survivor.”

The girl looked at him quizzically, not understanding anything he said.

He looked into the camera. “Like all wars, this one will end in time. All that remains to be seen is what the cost will be in human lives. How many more ‘Sabeens’ it will create?”

Eduardo stood, keeping a hand on the girl’s shoulder. “For twelve years, I’ve covered conflicts and famines in more countries than I care to count. I’ve been your eyes and ears, all in hopes to show the truth. That’s all I ever wanted to do.” He paused. “It is with sadness that I announce my days as a field correspondent are over. I’m coming home to anchor the nightly news from our New York studio. I might be stuck behind a desk, but the job is the same…Delivering the truth.”

He flashed his winning smile. “From Adra, Syria, this is America’s Newsman, Eduardo Garcia signing off.”

“Great. Time to go back to civilization.” Eduardo pulled a candy bar from his pocket and gave it to the girl. “Thanks, kid.” He sent her on her way.

“Make stuff up. You don’t even know that girl’s name. And that story was bogus.”

“First of all, her name
could
be Sabeen for all we know. Second, that story wasn’t bogus. It happens here every day. Maybe it didn’t happen to her, but it happened to somebody and people need to know that. It’s called narrative license.”

“That’s how you get to sit in the big chair in New York, Sam. Otherwise, you get stuck holding a camera here in Hell.”

Sam shouldered his heavy camera and communications gear with a grunt. “Very funny. You know you’re gonna miss me.”

“Yeah, about as much as I’ll miss checking my boots for scorpions every morning.” He grabbed his backpack from the ground and climbed into the back of a waiting MRAP, a heavily armed mine-resistant armored personnel carrier. These war wagons were the mainstay of American forces in the Middle East. “Let’s get back to base. I need a shower and some chow.”

Sam entered behind Eduardo. He closed the heavy armored door as an army corporal climbed into the gunner’s turret atop the crew compartment.

“Hang on!” said the soldier behind the wheel as he drove the steel beast toward a cluster of nearby sand-colored MRAPs identical to Eduardo’s. “Gonna link up with our guys and convoy back to base with ‘em.”

An American medical officer approached on foot and said, “We’re finishing up here. Food, water, and medical supplies are all gone. We’ll be ready to roll in five mikes.”