Read That Night with You Online

That Night with You 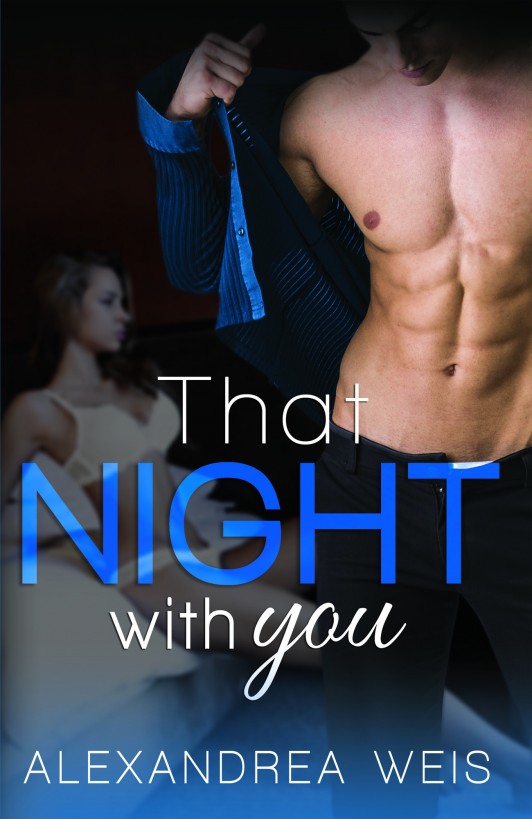 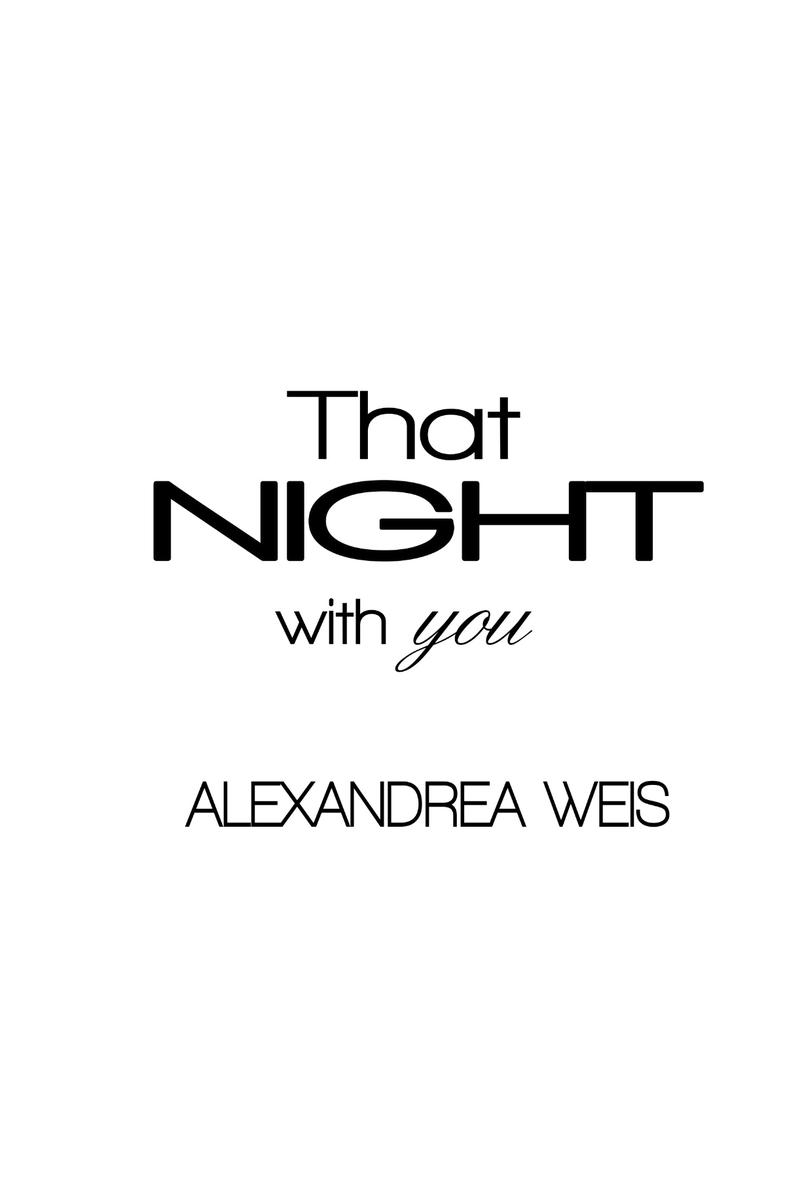 That Night with
You

This is a work of fiction. Names,
characters, places, and incidents are products of the author’s
imagination or are used fictitiously and are not to be construed as
real. Any resemblance to actual events, locations, organizations,
or persons, living or dead, is entirely coincidental.

All rights reserved. No part of this
book may be used or reproduced in any manner whatsoever without
written permission, except in the case of brief quotations embodied
in articles and reviews.

A swirl of cigarette smoke gathered
about the darkened entrance of Owen’s Bar, hovering in the air like
a ghost waiting for a divine wind to move it along. When the thick,
wooden door of the establishment opened, the smoke cloud parted. In
walked a slender brunette with alabaster skin, pink lips, and
cheekbones so well-carved that they seemed chiseled by a master’s
hand. Her lean body, shapely legs, and slender hips sauntered into
the dank bar. Dressed in jeans and a white tank top, she turned a
few heads of the men gathered about the worn walnut bar across the
room. She glided like a dancer as she moved amid the paltry array
of dark wooden tables set about the dirty stone floor. Her deep
green bedroom eyes flashed with recognition when they settled on
two young women, their heads together, at a table not far from the
entrance.

“
Hey guys,” the brunette
greeted as she stood by the table, gaping wide-eyed at her friends.
“What did I miss?”

A round-faced redhead with curls and
thick lips smiled up at her. “Madison Barnett, you’re late. We’ve
already done a round of tequila shots. You need to catch
up.”

The blonde narrowed her blue eyes on
Madison, smirking with delight. “I warned you, girl. We’re gonna
get shitfaced tonight.”

“
Sorry.” Grimacing in
apology, Madison removed the small black purse from about her
shoulder and eased into her seat at the table. “I got held up with
old man Pellerin.”

“
And how did the old coot
act?” the bouncy redhead inquired.

“
He was sweet, Lizzie, and
don’t call him an old coot. He told me if I ever wanted a job with
his architecture firm, I had one.”

The blonde reached for a half-empty
glass of beer. “Come on, Mads, you know you hated working for him.
You told me the other day that he was creepy.”

Madison glanced over at the blonde,
her green eyes clouded with misgivings. “I know, Charlie, but he
was really sweet today. He even got me a cake and had a nice little
sendoff with everyone from the office.”

Charlie raised her glass to Madison in
a celebratory toast. “Luckily, you’re done with Pellerin, Everly,
and Walters. Tomorrow you start working for Parr and Associates,
the biggest residential architectural firm in Dallas. You’ve hit
the big time, kid.”

Madison ran her fingers along the
gouged surface of the wooden table, her full lips turned downward.
“Not the big time, Charlie. I’m not working for a firm that builds
skyscrapers, only houses for rich people.”

Lizzie patted her hand reassuringly.
“Hey, you’re only twenty-six. You’ll get there. First, the houses
for the snooty people, and then the skyscrapers. Baby steps there,
girlie.”

“
Hey,” Charlie shouted as
she banged her beer glass on the table, “don’t go and get all
depressed on me, Mads. We’re here to celebrate! Your new job and my
wedding.” She waved her hand, summoning a barmaid who was resting
her elbows against the wooden bar. “It’s not every day I get
married, or my roommate gets such a cushy job. We need to top this
night off with some serious drinking.”

“
Absolutely.” Madison
smiled brightly and slapped her hand on the table, banishing her
unhappy thoughts. “But we can’t get too wasted. I start my new job
tomorrow.”

Charlie nodded. “Agreed. I’ve got my
last dress fitting at eight, so we have to make sure we’re in bed
by three at the earliest.”

“
Charlie,” Madison scolded
with a caustic gaze, “you’re going to be Nelson’s wife in three
weeks. Don’t you think you should start cutting back on the late
nights?”

The barmaid came up to the table.
“What’ll it be ladies, another round of beers?”

Charlie gave a wobbly shake of her
head, already appearing lit. “Three tequila shots and another round
of beers, please.”

The barmaid grinned, happy for the
business. “You got it.”

As she walked away, Charlie rolled her
blue eyes. “I’m not dead…I mean married yet, Mads. I’ve got to get
it out of my system before I make that march down the
aisle.”

Madison shook her head, angrily
pressing her lips together. “If you feel that way, why marry
Nelson?”

“
I love him,” Charlie
avowed. “I’m just terrified of marriage. You know, sleeping with
the same guy for the rest of my life seems so boring.”

“
I don’t know,” Lizzie
piped in. “It would be kinda cool not having to go out on any more
dates, have those awkward first times in bed with someone…you can
just be yourself with a guy.”

“
Hey, don’t knock those
awkward first times in bed,” Charlie countered. “They’re some of
the best memories I have of my sex life.”

“
Not me.” Lizzie grimaced.
“I remember the first time I did it, I was in high school and it
really sucked. Took me a few times to get comfortable with sex. I
always thought it was going to be like it is in the movies, you
know?”

“
Yeah, me too.” Charlie
slapped back in her chair, the spark dimming in her eyes. “When I
lost my virginity, I was sixteen and he was a senior on the
football team. What I remember was how much it hurt.”

“
What about you?” Charlie
turned to Madison. “You never told me about your first time.” She
rolled her eyes again with incredulity. “Let me guess…you and the
prom king on the night of your senior prom. I bet he rented some
expensive hotel room and everything. ”

Lizzie and Charlie snickered as
Madison ran her hands nervously up and down her bare arms. “No, ah,
it wasn’t like that.”

Looking over her glass at Madison,
Lizzie took a sip of her beer. “So, spill it. What was your first
time like?”

Madison sat back in her chair,
debating on how much she should disclose to her friends. “I was in
college, and I didn’t really know him. It was just the one
time.”

“
What did you do…pick him
up in bar?” Charlie’s smug look gave Madison pause.

The barmaid returned to the table,
saving her from having to come up with an answer right away.
“Twenty-six even, ladies,” she stated, removing the drinks one by
one from her black tray.

Madison eagerly reached for her purse.
She searched for her wallet while avoiding the inquisitive stare of
her roommate. After handing the money to the barmaid, she picked up
her glass of beer, looking for a distraction.

“
Are you going to tell us?”
Charlie insisted.

After taking a swig of courage,
Madison put the glass on the table and nodded her head. “I was
nineteen. Everyone I knew had done it, and I figured it was time I
did something about it. I felt so embarrassed to tell any of my
college friends that I was still a virgin. I remember pretending
that I had slept with guys, but the truth was I had never wanted to
do it with anyone until….”

“
Who was he?” Lizzie asked,
leaning into the table.

Madison skittishly smiled while
searching for the words. Christ, did she want to do this? She had
never told the story before, but now with her friends…was she ready
to talk about him? Breathing in the essence of beer and stale smoke
in the air, she rallied her nerve. “It was spring. I had just
failed my first midterm in my Introduction to Architectural Design
class and I needed to get out. I was feeling really low and I
remembered there was this bar around the UT Arlington dorms that
everyone talked about being great for hookups. So I got dressed up
and headed out. I never told anyone where I was going, not even my
roommate. Looking back, it was really a stupid thing to
do.”

“
Wait, you lost your
virginity to some guy you picked up in a bar? For real?” Charlie
angled closer to the table, her blue eyes ablaze with interest.
“You’re always so picky about men. You never want to go out with
anyone I set you up with.”

“
That’s because the guys
you set me up with are scary, Charlie.”

“
Doug the paralegal was not
scary,” Charlie argued.

Madison rolled her eyes, mimicking her
friend. “He was married.”

“
Separated,” Charlie
protested. “And so what if he wasn’t technically divorced. I
thought you two—”

“
Would you let her get back
to the story?” Lizzie cut in. She turned her doe-like, amber eyes
to Madison. “So what happened with you and the guy in the
bar?”

“
Skylar’s, that’s what it
was called. Inside there were a lot of business types hanging
out…you know, guys in suits. Some girls, but more men. I went to
the bar and had a seat on this torn, red leather stool. I remember
that stool…funny, huh? Anyway, it didn’t take long for a few guys
to hit on me, buy me drinks and stuff.”

Lizzie snorted. “You must have been
some real eye candy. Men love to watch you.”

“
It’s because she was a
dancer,” Charlie inserted. “Men love watching dancers.”

Lizzie slapped Charlie’s hand. “Let
her get back to the story.”

“
Well,” Madison went on,
“none of the guys that talked to me really hung around for long.
They just talked and left. I guess I had been there about an hour,
and was a little buzzed from drinking vodka, when this guy came up
to me.” She closed her eyes as her thoughts went back to that
night. “He was really good-looking, handsome with thick, dark wavy
hair, small gray eyes. I think he was in his late twenties.” She
opened her eyes. “He was slender, but built, like he worked out. I
remember he had on this dark blue sweater, a real nice one, and he
smelled….” She sighed. “Really good. His face was kinda rugged,
with a wide jaw and thick brow, which made him seem really intense.
The first time I looked into his eyes it was like pow.”

“
Whoa,” Charlie breathed.
“What did he say when you first met?”

“
What, no pick up line?”
Lizzie questioned.

Madison shook her head. “No, no lines.
In fact, the whole night he never used one line on me. I remember
he told me he liked to cut right to the chase. He thought ‘games
were better suited for cards, not people,’ his words.”

The Escapist by Fox, Madoc
Brother Willy's Traveling Salvation Show by Mitchell, W. Scott
Salty Sweets by Christie Matheson
One Night with a Quarterback by Jeanette Murray
A Rare Murder In Princeton by Ann Waldron
Death of a Glutton by M.C. Beaton
Sudden Death by Phil Kurthausen
Hold Your Breath (Search and Rescue) by Katie Ruggle
The Women of Duck Commander by Kay Robertson, Jessica Robertson
Las tres heridas by Paloma Sánchez-Garnica
Our partner