Read Much Ado About Mavericks Online

Much Ado About Mavericks 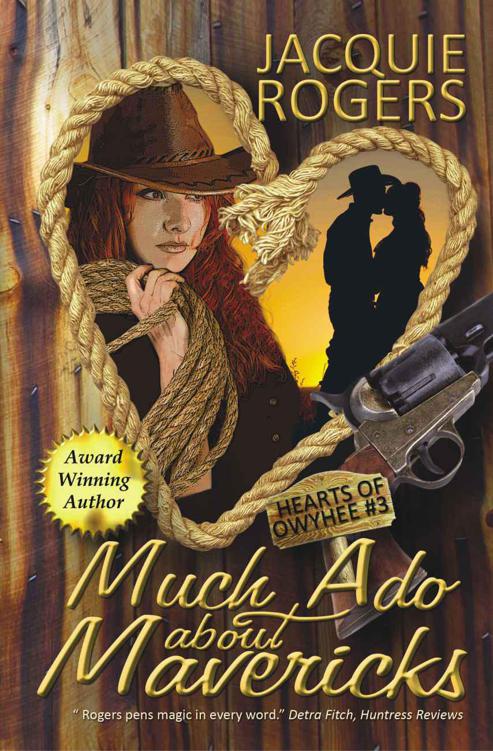 FIVE STARS! Jacquie Rogers writes some of the best Historical Romances on today’s market. Not content to simply write a plot and toss in a lot of bed scenes and/or filler, this author adds in subplots, humor, action, suspense, and some endearing strays.
~Detra Fitch, Huntress Reviews

Much Ado About Mavericks is a great way to spend a lazy weekend!  The third book in the Hearts of Owyhee series
delivers
a
sexy romance full of fun.  If you like men in chaps and a good time, this is the book for you!  ~BookwormForever

Much Ado About Mavericks

Other books to try

Benjamin Lawrence had left the Bar EL ranch thirteen years before as a gangly boy who couldn't rope a fence post if it stuck
itself
through the loop.  Now, he
’d return
as a successful
Boston
attorney in line for a partnership at the most prestigious law firm in the city.

He tipped his derby up with his sword-cane.
Local boy made good.  With a little luck, they'd also forget the detestable nickname his father had bestowed upon him—Skeeter.

As soon as he settled
his
father’s estate
,
all three of them would board the first train back to
Boston
.
Suzanne had grown into a beautiful woman and there’d be no trouble finding moneyed gentlemen to court her.  His mother would finally get the lady’s life the sweet woman deserved.

Desert
temperature
s
hovered at over a hundred degrees and the alkali dust hung so thick in the air he could’ve
sliced it with his epée
.

A kindly woman named Mrs. Perkins and her daughter shared the
jolting, lurching
stagecoach with him, along with a man of disreputable
appearance who called himself Rastin.  He was a bucktoothed
cowhand
sporting a week’s worth of grimy stubble
,
with a dirty bandana sagging around his neck
.  The only other humans
for
the
ten
miles
between
Nampa
and Huston
were the driver and the
shotgun messenger
.

“Hold up there,” a man’s guttural voice boomed from a distance outside.  “Stop the stagecoach!”

Ben amended his assessment.  Trouble had found them, although why anyone would hold up this stage was a mystery since
it carried few
passengers
and, according to the shotgun messenger, no valuables
.

“Go straight to hell,” the stage driver yelled back. “Hyah!” He snapped the whip.

Gunfire ripped through the heat.

“Get down!” Ben shoved Mrs. Perkins and her screaming adolescent daughter to the stagecoach floor.  Bullets pitted the wood around the windows as
he
forced the women out of harm’s way, the deafening blasts of gunfire unrelenting.

The stagecoach raced over the rutted, rocky
Idaho
road,
whip cracking
and the driver yelling, “Hyah, hyah!”
The woman and girl
ricocheted around the coach interior is if they were ragdolls
, battered by mailbags and luggage
.
Ben
held on to them in an attempt to buffer the bruising.

Rastin, however, sat through the ordeal with nary a flinch.

More gunshots rang out.
Mrs. Perkins
held her daughter
and the
girl
whimpered as she clutched her mother for dear life.  Rastin drew his Colt, then leaned back without even glancing out the window.  “Lots of holdups on the stages lately,” he remarked as if discussing the state of the stock market.  He motioned to Ben with the barrel of his pistol.  “Best be prepared to give up that fat bulge in your vest pocket.”

Ben studied the man’s overly calm demeanor. Men of the west took great pride in maintaining their composure under fire, but Rastin
showed no surprise
about the alarming turn of events.  One thing Ben had learned during his nine years as a lawyer was how to read a man’s demeanor.  This miscreant was in on the job, Ben would bet Thomas Edison’s next patent on it.

Rastin flexed his hands, as if delighted to have the opportunity to use his weapon.

The coach bounced with tooth-crunching violence over ruts and
washouts
, the axles enduring tremendous force.  Ben hoped to high heaven they didn’t break and leave them stranded in this god-forsaken country.  Shots came in volleys so he placed himself between the gunfire and the ladies for what little protection he could offer.

When men on horses raced by,
Rastin opened
the passenger door and as the coach slowed,
he
jumped out, tumbled in the dirt a few times, then sprang to his feet.

Ben held his cane with one hand so he could draw the sword if he deemed it the most effective weapon; otherwise, he’d use the pepper gun hidden up his sleeve.  While he couldn’t see the bandits, judging by the shots and the voices, there were two or three of them—and one of him.

Shouting and shooting continued, the coach slowed to a stop, and after some shuffling noises and a thump, Ben saw the driver’s limp body hit the ground not far from the coach door.

“He don’t look too healthy.”  Rastin kicked the
wounded man
.  To his cohort, he said, “That there lawyer has a nice roll of bills in his left vest pocket.  He sure does.”

Ben kept the ladies beneath him.  “Stay calm, and stay here.”

The woman and daughter held each other, the daughter sobbing quietly, the mother deathly pale.

His money clip was the only item of value on the entire stage, and he carried barely enough for
traveling expenses
and his ticket back to
Boston
.  Either the robbers had bad information or they weren’t very competent criminals.
This
holdup and Rastin didn’t
smell right
.

“Everybody out!” one of the robbers ordered.

Ben motioned for the women to stay in the stagecoach.

The woman and girl
remained huddled together, appearing all too happy to comply.  With a little luck, he might be able to save them from harm, even if he had to sacrifice his money clip to do it.

A bullet crashed through the coach wall but didn’t hit anyone.  Ben glanced outside.

The shooter was a big, scruffy man mounted on a nice looking paint.  “C’mon out, city feller.  We’re having a party.”

Rastin snorted.  “You can party with the feller—I’m having me a piece of that sweet young thang in there.  I been looking at her all day long.”

Ben wondered who their boss was.  Must be a powerful man to
buffalo
this
despicable
band of scoundrels.

Ben’s every muscle tensed, on high alert.  The odds weren’t great, but he did have a chance of talking his way out of this debacle and removing the ladies from further peril.

Three men, two on horses and Rastin, drew bead on him.  One of the mounted men, a string bean, fired a few inches from Ben’s foot. “
Let’s see a city feller do the two-step
!” he shouted to the others’ guffaws.

Ben took the opportunity to spring into his fencing stance and palm his pepper gun in his left hand.  Bullets thundered into the dirt around him, kicking up a cloud so thick he could barely breathe.

“Your citified hide—and your money roll wouldn’t hurt my feelings, either.”  The hefty robber spat a wad a chaw that landed a foot from Ben.

“I’m rather fond of my hide, but you can have the money.  All of it.”  He still couldn’t make sense of this holdup, but his skin crawled with the horrifying notion that they were more interested in hurting someone, probably the women
,
and the
felons
knew they’d have to get rid of him to do it.  The money roll was only an excuse.  He had to keep them occupied until he could position himself more strategically.

“Hell, boys, quit your dawdling and do what we came to do
.
”
Rastin sneered and cocked his Colt.  “We got more fun waiting in the stagecoach.”

The skinny villain obliged by shooting at Ben’s feet two more times.  The dust made good cover for him to grab a rock and leap within a step of Rastin.

Ben squeezed off a
lucky shot
that
sent the skinny man’s pistol flying from his hand, and then Ben heaved the rock at the fat one and knocked him off his horse.  In a split second, Ben had the pepper
gun aimed at Rastin.

Rastin dropped his sidearm and backed away.  “You’re bluffing.”

An explosion and pellets from the guard’s scattergun sent the two robbers’ horses rearing and the villains landed in the powder dirt, which billowed around them, obliterating any visibility at all.

“He ain’t bluffing,” the guard rasped.

Rastin caught his spooked horse
by one rein
, mounted, and sped for the hills, leaving his buddies to run after him afoot.

The guard
’s
wound
s, two shots in his right arm,
spewed blood and he
tipp
ed
, about to fall off the side.
Ben leapt for the driver’s seat and
hauled him back up to the top of the stage.

“I hope that shotgun blast isn’t the last
thing you ever do, buddy.  We’ll
make a break for
Huston
just as soon as I get the driver.”

“Beginner’s luck I guess—first time I ever shot that pepper
gun.”

Ben assumed Pudge was the driver. “Don’t know.”  He reloaded the shotgun and shoved it into the slumped guard’s hands.  “Can you handle this?”