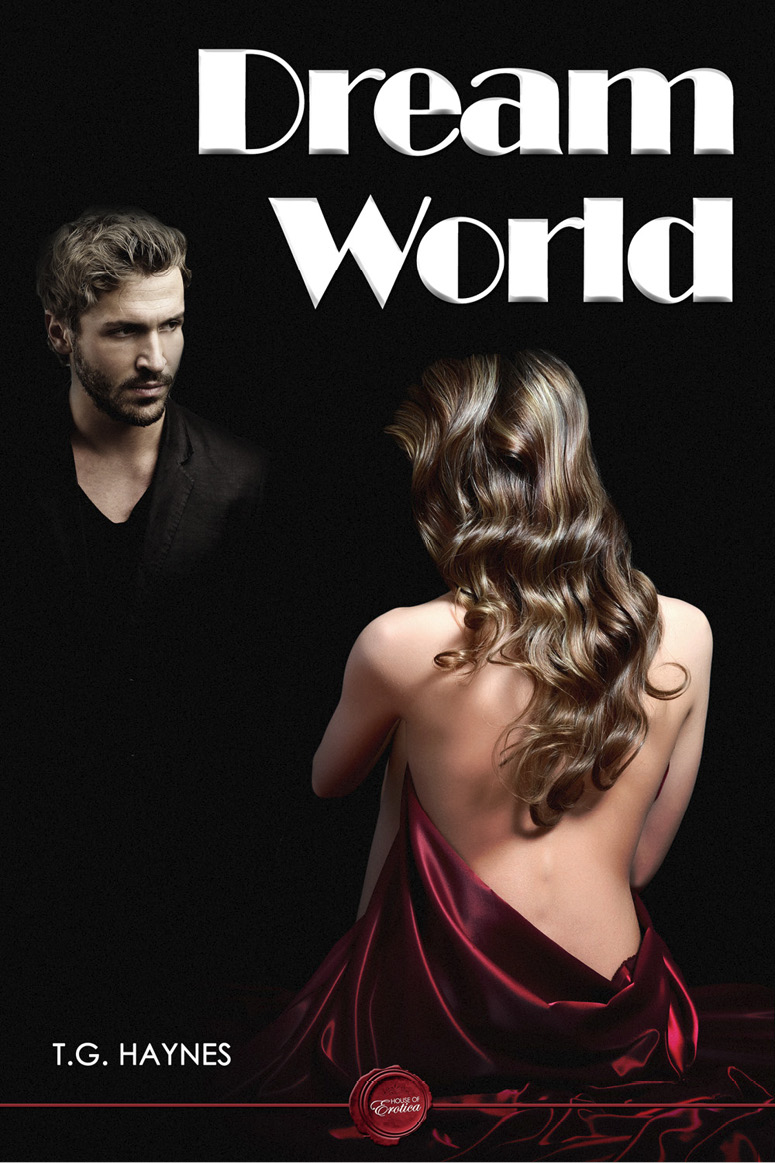 published in 2015 by House of Erotica

an imprint of Andrews UK Limited

The right of T.G. Haynes has been asserted in accordance with sections 77 and 78 of the Copyrights Designs and Patents Act 1988.

This book is sold subject to the condition that it shall not, by way of trade or otherwise, be lent, resold, hired out or otherwise circulated without the publisher's prior written consent in any form of binding or cover other than that in which it is published, and without a similar condition being imposed on the subsequent purchaser.

The characters and situations in this book are entirely imaginary and bear no relation to any real person or actual happening.

The Kindest, Loveliest, most Beautiful Woman in the world.

âNothing.' A few minutes passed by in silence then Kate tried again. âAlan.'

The only problem was, Kate wasn't sure how to address the issue that was troubling her. In a half-hearted attempt to show his girlfriend that he took her seriously, Alan made what he considered to be a real concession by lowering the volume on the television. Anxious to ensure that he listened to her, Kate took the remote control out of his hand and switched the television off. She really didn't need any added distractions given what she was about to say.

Nervously fiddling with the remote control she asked, âAre you satisfied with the way things are?'

Alan shrugged his shoulders in response. It was a typical Alan answer. Now that she had broached the topic, however, Kate was determined to discuss what was irking her. It seemed like an age since they had last had a proper conversation. Kate tried a different approach.

âDon't laugh,' she said. âI'm trying to be serious here.'

Before replying Alan went to take a sip of lager. To his disgust he found the bottle empty. Sensing that Kate wasn't going to allow him to escape into the kitchen to get another he tried to second guess what she wanted to hear.

âYes, I'm happy, OK? Satisfied? Now I'm going to go and get another drink. Can I get you one?'

As he rose from the sofa Kate caught hold of his arm and pulled him back down. Alan hit the soft leather with a resigned thud.

He didn't understand. âNot what?'

âDon't try and avoid the issue.'

âI'm not,' he replied. âI just hate these kind of conversations.'

âWhat kind of conversations? We hardly ever talk these days.'

âWhat are you on about? We talk all the time.'

âNo we don't,' Kate said, putting her foot down. âThat's one of the reasons why I feel unhappy.'

âAlright,' he grunted. âWhat else?'

Kate risked trying to hold hands. Instinctively, he flinched away.

âYou're sure there's nothing wrong?' she persisted.

âYou would tell me if there was, wouldn't you?'

Unable to ignore the situation any longer, Alan turned and faced his girlfriend. âYou know how busy I've been at work recently. I've just got a lot on my plate, that's all.'

âDon't worry about it,' he said.

Alan reached across, drew her into his arms and hugged her tightly. As her head nestled into his chest he half thought about switching the TV back on. Kate kissed him. His lips felt cold and distant. He tried his best to shrug her off only she persisted.

Kate snaked her right hand out and began to undo the buttons on his shirt. She managed to pop two open before he broke away from her.

âWhat's the matter?' she asked.

âI'm not in the mood right now,' he snapped irritably.

âBut it's true. You act like you don't fancy me anymore.'

In spite of his reassurance Kate couldn't help noticing that he struggled to make eye contact with her as he made the comment.

Sensing that he needed to make some kind of conciliatory gesture, Alan leant across and kissed her. The instant she responded, though, he broke away from the kiss, got up off the sofa and went into the kitchen in search of another drink. Much to his disappointment he discovered that they were out of lager. Re-entering the living room he threw his jacket on.

Kate could hardly believe it. âWhat are you doing?'

âBut I was going to cook later, then I thought we could watch a film and...'

She needn't have bothered saying anything, he was already half way out of the door. As if to illustrate just how happy he was with life he slammed it shut behind him. Kate pursed her lips, closed her eyes and counted to ten. Resigning herself to another evening alone in front of the television she reached for the remote control. As she clicked the TV on the chat show host on the channel that the television was tuned into looked directly into the camera and asked, âIs your relationship in crisis?'

Kate snapped the TV off instantly. The question disconcerted her. Grabbing her mobile off the coffee table she rang her best friend Sylvia. Sylvia answered with her usual cheery, âHi, Babe, how's it going?'

âI was just wondering if you fancied a game of squash. I feel like hitting something.'

An hour and a half later, having taken out weeks of frustration on the poor little squash ball, Kate felt a tiny bit better about life. As they strolled off court Sylvia asked what was wrong. She wasn't at all surprised by Kate's reply. âAlan.'

Sylvia flopped down onto the bench in the changing room, rolled her eyes and shook her head.

âWhat's that supposed to mean?' Kate asked, a note of irritation in her voice.

âWhen are you going to ditch that idiot.'

Much to her surprise Kate suddenly became quite defensive about her errant boyfriend. âHe's not that bad.'

âOh, please,' Sylvia said. âHe's such a loser. And he treats you really badly. And the worst part about it is that everyone can see it except for you.'

Kate couldn't bring herself to answer any of the allegations. Probably because, deep down, she suspected Sylvia was right. Trying to defend Alan to her friends had become a rather wearisome pastime recently and one that she was not prepared to indulge in that night.

Peeling off their tops and shorts the two girls made their way into the showers. As she lathered her body with shower gel Kate reflected on her lot once more. Perhaps it was her fault Alan didn't fancy her anymore. If only she had a figure like Sylvia's, Kate was sure that he would still want to make love to her. As the thought crossed her mind Kate cast a quick admiring glance in her friend's direction. Given that Sylvia was bi-sexual, Kate ensured that her glance didn't linger, just in case Sylvia got the wrong idea. Though they had been best friends for years, Kate couldn't help but feel ever so slightly jealous of Sylvia. Whereas Kate's hair was wavy and light brown, Sylvia had long, flowing blonde hair. Though Kate was a touch over five foot eight tall, she was still two inches shorter than Sylvia, plus she would have gladly swapped her brown eyes for Sylvia's sparkling green ones. Kate sighed and shook her head.

âYou know what you need, don't you?' Sylvia said.

âYou don't have to. I know what you're about to suggest. I can read you like a book Sylvia Simmons.'

âOh, really. Come on then little Miss mind reader, what was I going to suggest?'

âA trip to that dream centre you visit.'

Sylvia's eyes twinkled as she tried her best to tempt her old friend. âWhy not?'

Kate clicked the shower off, grabbed her towel from off the hook and wrapped it around her glowing skin. In a moment of weakness she said, âGo on then, do your best to try and sell me.'

Sylvia reached for her towel, âWell...'

When the first Dream World opened up on the outskirts of the capital back in twenty eighteen no one could have predicted just how successful it would be. Dream World offered trips in terms of time, space and reality, and if you harboured a slightly risquÃ© fantasy that you longed to fulfil, there was no better place to live it out than Dream World. You name it, Dream World catered for it. People clamoured to visit. The queues to get into the centre broke all known records. Those who visited spoke enthusiastically about the experience, which only went to enhance peoples' interest further. After having been open for six months, however, a legal challenge was put forward. Concerns were raised as to the effect the trips had upon the sub-conscious and so Dream World temporarily closed down until the issue was dealt with. Careful tests were carried out which proved that there were no lasting long term side effects. The centre was just about to re-open when another legal challenge was made. This time the questions raised concerned the nature of the trips that were being taken and what boundaries and limits were in place to stop minors from exploring scenarios that were deemed to be unsuitable.

The owner of the centre, Richard Hampton, did his best to assuage peoples fears, but the legal battle dragged on for so long he very nearly went bankrupt. Finally, Richard proposed a compromise. The original Dream World would have limits imposed upon the dream scenarios and be run as a family friendly venue, but a second Dream Centre would cater for adults only. A deal was struck and along with Dream World re-opening, the âadults-only' centre opened early in the year twenty-twenty. During its first six months of business the second Dream World proved so successful that Richard planned to expand and was due to open a further half a dozen venues across the country. Sylvia had attended the second Dream World's gala opening night - having won tickets in a prize draw - and she had been a regular visitor ever since.

âI still don't quite get it,' Kate said in the car on the way back to her apartment. âAre you saying that you can experience absolutely anything?'

âHang on, I thought you said there were no limits?'

âWell, obviously there are certain safety caveats put in place to stop any potential sickos from indulging in illegal fantasies, but apart from that, pretty much anything goes.'

âSo let me get this straight. You can visit any time, any era, any period?'

âNot only that, you can visit anywhere, with anybody and, best of all, get up to whatever you want to with them. The only limits are your own imagination.'

âWhen you put it like that it does sound tempting,' Kate mused. âBut...'

âBut what? Oh come on. Don't tell me you've never fancied a night of passion with James Bond or Heathcliffe or Mr Darcy.'

âNeither are your dreams, that's the whole point. It's completely harmless.'

âI don't know. I think it would still seem strange to me, as if I was cheating somehow.'

âWhat, on that slimy boyfriend of yours? Do me a favour. I bet he wouldn't think twice.'

âWhat's that supposed to mean?'

âNothing. Look, why not come along with me this weekend. What have you got to lose?'

As she made the suggestion Sylvia's left hand slipped off the gear stick and brushed against Kate's right thigh. Kate flinched. Sylvia immediately withdrew her hand, pulled the car over to the kerb and apologised.

âDon't be silly, there's no need,' Kate assured her.

To show that there was no harm done the two girls hugged.

âTell you what,' Sylvia said. âIf I can't persuade you to visit Dream World with me, how about we go out and paint the town red tomorrow night?'

âI'll come around and pick you up at seven?'

âMake it seven thirty and you've got a deal.'