Read The Girl From Number 22 Online

The Girl From Number 22 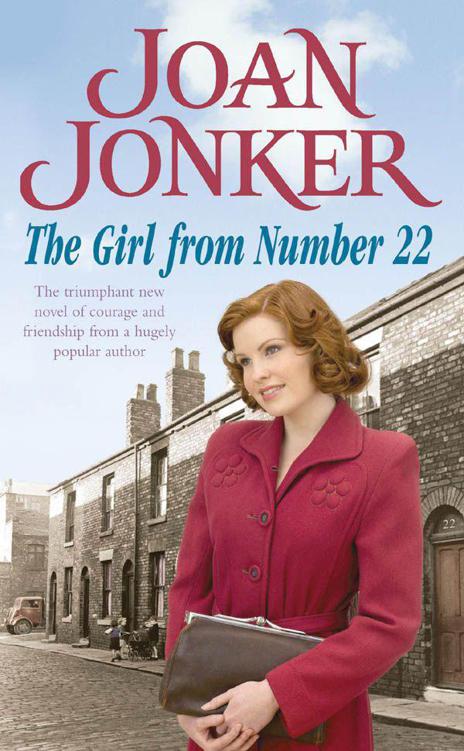 The Girl From
Number 22

Copyright © 2004 Joan Jonker
The right of Joan Jonker to be identified as the Author of the Work has been asserted by her in accordance with the Copyright, Designs and Patents Act 1988.
Apart from any use permitted under UK copyright law, this publication may only be reproduced, stored, or transmitted, in any form, or by any means, with prior permission in writing of the publishers or, in the case of reprographic production, in accordance with the terms of licences issued by the Copyright Licensing Agency.
First published as an Ebook by Headline Publishing Group in 2011
All characters in this publication are fictitious and any resemblance to real persons, living or dead, is purely coincidental.
Cataloguing in Publication Data is available from the British Library
eISBN : 978 0 7553 9038 0
HEADLINE PUBLISHING GROUP
An Hachette UK Company
338 Euston Road
London NW1 3BH
www.headline.co.uk
www.hachette.co.uk
Contents

Joan Jonker was born and bred in Liverpool. Her childhood was a time of love and laughter with her two sisters, a brother, a caring but gambling father and an indomitable mother who was always getting them out of scrapes. Then came the Second World War – a period that Joan remembers so well – when she met and fell in love with her late husband, Tony.

For twenty-three years, Joan campaigned tirelessly on behalf of victims of violence, and her first book,
Victims of Violence
, is an account of those years. She has recently retired from charity work in order to concentrate on her writing. Joan has two sons and two grandsons and she lives in Southport. Her previous bestselling Liverpool sagas have won her legions of fans throughout the world:

‘Your sense of humour and knowledge of the old Liverpool is unsurpassed by any other writer’ Judy Down, New Zealand

‘I am proud to say I own all the books you have written. Thank you, Joan, for so many hours of pleasure’ Ena Gardner, Newbold Verdon, Leicestershire

‘Wonderful . . . The characters are so real I feel I am there in Liverpool with them’ Athena Tooze, Brooklyn, New York

‘I picked up my first Joan Jonker book and knew I had made a friend. You make me laugh, cry and are like a light in a dark room’ Thelma Morris and Karen and Geoff, New Mills, High Peak

‘When I’m low and feeling sorry for myself . . . all I need is to pick up one of your books . . . and I’m soon feeling better’ Marion Carver, London

When One Door Closes

Man Of The House

Home Is Where The Heart Is

The Pride Of Polly Perkins

Sadie Was A Lady

Walking My Baby Back Home

Stay As Sweet As You Are

Many A Tear Has To Fall

Taking A Chance On Love

Strolling With The One I Love

Featuring the McDonoughs and Bennetts

Stay In Your Own Back Yard

After The Dance Is Over

The Sunshine Of Your Smile

I am dedicating this book to all my readers, who have enriched my life so much with their letters and their friendliness.

As one of my characters would say, ‘I love the bones of yer.’

Hello to all my friends.

This is another of my one-off stories. The characters will be strangers to you until you get to know and enjoy them. You will love the goodies, and from the depths of your easy chair you can hiss at the baddies.

‘I’m going to the shops, Ada. Is there anything yer’d like me to get for yer?’ Harriet Watson looked up to where her next-door neighbour was standing on the top step. ‘Save yer going out yerself.’

‘No, I’m going to the shops meself, girl, but thanks all the same. I haven’t made up me mind what to get for the dinner yet.’ Ada Fenwick opened the door wider. ‘If yer want to come in and wait a few minutes, Hetty, I’ll come with yer. I’ve only got to wash me hands and comb me hair.’

‘Yeah, okay, I’m not in a hurry.’ Hetty smiled at what she was about to say. ‘I’ve even got time for a cuppa.’

‘Ye’re a cheeky sod, Hetty Watson. Ye’re certainly not backward in coming forward. And I suppose yer’d like a biscuit to dunk in the tea?’

Hetty squeezed past her neighbour of twenty years. ‘It pays to be cheeky sometimes, queen. But I’ll repay yer kindness by giving you afternoon tea, eh?’ Her mousy-coloured hair was neatly combed, and with her slim figure and the smile that was never far from her pretty face, she looked much younger than her thirty-eight years. ‘We could always buy ourselves a cake to bring back, and make a proper job of it.’

‘Don’t be going all posh on me, Hetty Watson. Next yer’ll be
asking me to go to Reece’s tea dance with yer.’ Ada’s ample body shook with laughter. ‘Someone told me once, bragging like, that Reece’s dance hall had a sprung floor, and it would need it if I started doing me stuff on it. I used to be quite a raver in me time. Jimmy will tell yer, the boys used to queue up to dance with me.’

‘To hear you talk, anyone would think yer were like Two Ton Tessie O’Shea. Ye’re not fat, Ada, ye’re pleasantly plump. Yer can certainly move when ye’re in a hurry. While I’m puffing and panting, you sail along as though ye’re floating on air.’

Ada’s bonny, rosy face broke into a smile. ‘No, girl, I only float on air after two bottles of milk stout. Anyway, I’ll go and make that pot of tea, girl, before I forget I promised yer a drink. Once I get started on the old days, I don’t know when to stop.’

Hetty looked around the room and nodded. It was like a little palace as usual. You could see your face in the sideboard, it was so highly polished. The net curtains on the front and back windows were pure white, and the panes of glass gleaming. ‘Have yer got any bright ideas for what to get in for the dinner?’ she called. ‘It’s a worry every day, trying to come up with something for a change.’

Ada came in drying her hands. ‘It’s a toss-up between a sheet of ribs, which would please Jimmy and Danny, or sausage and mash. We had stew last night so we can’t have that again, or I’ll be getting complaints. The kids aren’t fussy. They’re like me, they’ll eat anything that’s put in front of them.’

‘Me too. I’m not a fussy eater,’ Hetty said. ‘It was easy before Sally and Kitty left school and started work, they weren’t fussy then either. But now they expect me to do miracles with the few bob they hand over.’ Her elder daughter, Sally, was eighteen, and her younger, Kitty, was seventeen. ‘So shall we stick with ribs tonight, sausage tomorrow, and to hell with whether they like it
or not? I’m not going to start cooking different meals for everyone, they’ll have to eat what’s put in front of them. As me mam used to say, hunger’s a good sauce.’

The kettle began to whistle, and Ada made for the kitchen to turn off the gas and pour the boiling water into the brown teapot. ‘Yeah, we’ll do that, girl,’ she shouted back. ‘Not that mine would moan no matter what I served up, but I like to please Jimmy and Danny. I think they deserve to come home to something they fancy after putting in a hard day’s work. And when the two youngest start work and are bringing a few bob in, then I’ll listen to their likes and dislikes.’

Hetty pushed her chair back and walked into the kitchen. ‘You bring the cups in, queen, I’ll carry the pot.’ She turned her head to add, ‘And don’t forget the promised biscuit.’

When they were sitting facing each other across the table, Ada said, ‘I haven’t seen much of Eliza the last few days. D’yer know if she’s all right?’

Eliza Porter was an elderly woman who lived across the street from them, and most of the near neighbours kept an eye on her. ‘She waved to me this morning when she was taking her milk in, so she’s all right.’ Then Hetty frowned. ‘Mind you, come to think of it, I haven’t see her going to the shops for a few days. Shall we give a knock on our way out, and ask if she needs any shopping?’

Ada nodded. ‘Yeah, we’ll do that, just to make sure.’ Again she nodded her head, but this time it was towards the plate. ‘Yer may as well dunk that last ginger snap, then I can take the empty plate out. I’m not going to ask if yer want any more, ’cos our Danny would blow his top if there were no ginger snaps.’ Danny was her eighteen-year-old son, and her pride and joy. ‘Honest, he’s like a big soft kid sometimes.’

‘Oh, don’t be trying to kid me, Ada, for I know yer love the bones of him, and yer spoil him rotten. But I have to admit if he was my son I’d spoil him too. He’s a lovely lad, and it’ll be a lucky girl who gets him.’

‘She’ll have to be more than lucky to get past me,’ Ada said jokingly. ‘I’ll want to know everything about her and her family, right down to how many blankets they have on their beds.’

‘For heaven’s sake leave the lad alone and let him enjoy himself.’ Hetty tutted. ‘He’s only young once.’

‘And he’s making the most of it, girl, believe me! He’s out every night at one dance hall or another, having the time of his life. And I don’t begrudge him one minute of it. He may as well enjoy himself before he settles down. His mates tell me he’s a smashing dancer, and he’s got all the girls after him. But Danny never mentions girls to me, so I can’t see there being anyone in particular . . . not yet, anyway.’

‘He wouldn’t tell you if there was, queen, not the way you dote on him. He knows he’d get the third degree if he even mentioned a girl’s name.’

‘Ay, I’m not that bad! I’m only thirty-seven years old, young enough to remember what it was like to have a mother who wanted to know every time I took a breath. She was so strict with me, I used to have to tell her fibs, just so I could go out.’ Ada chuckled. ‘I have to confess, though, that I asked for it. I was a cheeky little beggar when I was at school, and a damn sight worse when I left. I thought the world was there for me to enjoy meself, and I led me poor mam and dad a merry dance.’ She became serious, and said, ‘I made it up to them, though, when I learned a bit of sense. I met Jimmy, we fell in love, and suddenly I realised what I’d put me parents through.’

Caminarás con el Sol by Alfonso Mateo-Sagasta
Always Right by Mindy Klasky
Dead Run by Sean Rodman
Aftermath (Book 1): Only The Head Will Take Them Down by McArdle, Duncan
Forbidden by Lincoln, Abbey
Mahu Fire by Neil Plakcy
Abide With Me by Delia Parr
Do You Take This Enemy? by Sara Orwig
Flipped Off by Zenina Masters
The Summer Wind by Mary Alice Monroe
Our partner