Honor Reclaimed (All About Honor) 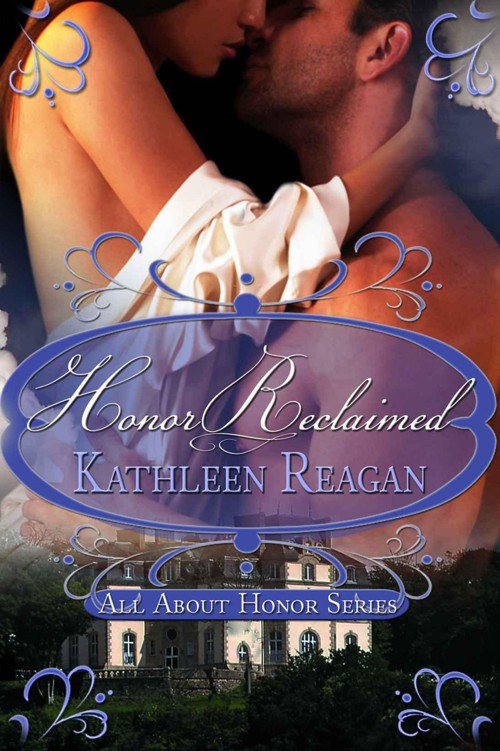 
All
About Honor Reclaimed Copyright© 2005 by Kathleen Reagan All rights reserved.
No part of this book may be reproduced in any form or by any electronic or
mechanical means including information storage and retrieval systems –
exceptions being in the case of brief quotations embodied in critical articles
or reviews, and not without the prior written permission in writing from the
author.

A
huge
thank
you to my support staff who were
responsible for the editing of this book.

It pleases me no end that I gave birth to this particular staff.

Thank you Reagan, Koleen and Ashley!

The warm summer day found the Lewis
family out side enjoying the sun and the garden.

John and the three children were playing chase among the
shrubs while Johane sat on the wrought iron bench in the shade.

William, their oldest, and their
only son, managed to keep just a little ahead of his father as they ran around
and around one of the larger shrubs.

His mistake was dart away and trying to out run his father on the
straight stretch.

He swept William
up, holding him protectively in his arms, rolled across the thick green lawn,
stopping to tickle the helpless boy.

That was all the invitation two little girls needed.

They piled on top of their father and
the three children all began tickling their overwhelmed father.

Johane held her the sides of her
overstretched belly as she laughed at their antics.

It gave her great pleasure to see her husband and their
children cavorting and enjoying each other so much.

She felt truly blessed to have found such a loving man.

He was a good and considerate husband
and a wonderful and loving father who took great joy in his family.

If she were to die today, she would die
a happy fulfilled woman.

Laughing Johane said, “John, you
must stop that.

I have laughed so
hard my sides hurt.

I think they
are insulted because it is already stretched so tight with your new son.”

John stopped immediately and went to
her side.

“Are you sure that is
not my son telling you that he is ready to make his appearance”, he asked?

“I really do not think so, but one
never knows.

I am tired
though.

Maybe you could help me
get up now.

I think I shall go lay
down for a while.

Nanny, I think
it is time for the children’s nap as well.”

Johane held out her hands for John to assist her.

John took her hands to help pull her
to her grossly swollen feet.

He
had been worried about her during this pregnancy.

She did not have the strength that she had had with her
previous pregnancies.

She had been
experiencing a great deal of swelling in her face and hands as well.

Recently she had begun to complain of
frequent headaches.

He would be
very glad indeed when this baby was finally born.

He was considering asking the midwife if there was anything
they could do to prevent another pregnancy.

The Church was adamantly against any form of birth control,
and it was illegal as well, but he was not willing to chance another pregnancy,
Johane was too dear to him.

Johane stood for a few minutes to
get her balance when suddenly she doubled over as the contraction hit her.

At that moment she felt a pop and the
gush of warm liquid down her legs leaving a large puddle of fluid at her
feet.

John scooped her up in his
arms and carried her to the house.

Matthews, the butler opened the door for him as he approached.

“Matthews, send right away for the
midwife.

Have them tell her that
it is their mistress’ time.”

He
carried her on up the stairs to their chambers.

“Joan, pull back the covers so that I can lay your mistress
down.”

“No John, don’t lay me down just
yet.

I need to get out of my wet
gown and Joan needs to arrange the bed with the pads of old sheets that we have
already prepared for this occasion.”

John did not wait for Joan’s
assistance.

He had Johane out of
her wet gown and into her nightgown by the time Joan had the bed ready.

He scooped Johane up again and
deposited her in the middle of the bed, on the center of the pad.

It took about an hour for the
servant to return with the midwife.

John had not left his wife’s side the entire time.

He held her hand with each
contraction.

When the midwife
arrived, Johane’s contractions were only 2-3 minutes apart and very hard.

After banishing John from the room, the
midwife checked her and pronounced her almost ready to push.

Three pushes later and the
baby entered the world with a lusty cry.

He was pink and perfect.

Johane could not stop the tears of joy as she held her newly born
son.

John had been pacing in the
hallway when he was amazed to hear the sound of an infant’s cry.

He remembered her first labor, which
had taken the better part of an entire day and had been quite difficult.

What a relief he felt when he opened
the door to see his beloved wife with their beautiful newborn babe already at
her breast.

She smiled up at him
with tears in her eyes, “John, meet your new son.

I have decided that I would like to name him after his
handsome father.

My hope is that
he will grow up to be half the man his father is.

She lay back against the pillows
that were propped behind her and closed her eyes.

John pulled up a chair next to the bed so that he could hold
her hand as she rested.

The midwife pronounced it a
successful delivery.

She collected
her pay and left as Joan was lifting baby John from his mother’s arms.

He was placed in the cradle that had
been prepared in advance for him.

It was the same one that little John’s brother and sisters before him
had used.

Johane stirred as they lifted the
baby from her arms.

She looked up
at John and tried to smile up at him, but it came out as more of a
grimace.

“Not really,” she replied, “it is
just that my head really aches.

I
have never had a head ache as bad as this before.”

John got up and went over to the
basin.

He poured out some fresh
cool water and wet a cloth in it.

After wringing it out he folded it and placed it on her forehead.

Johane closed her eyes again and tried
to rest, but the pain continued to increase.

She became restless and began to thrash around in the
bed.

John wasted no time in
sending the servant to once again fetch the midwife.

He knew from past experience that this was not a normal
result of the childbirth.

Fortunately, the midwife had stopped downstairs in the kitchen to take
dinner before she left.

It only
took her minutes to return upstairs.

Just as she entered the room Johane began to have a convulsion.

Her back arched and her arms and legs
began to thrash violently.

The
midwife rushed to her and quickly turned her on her side.

After a couple of minutes the
convulsion subsided and she lay there placidly.

John was absolutely frantic, “What
is happening?

What is wrong with
her?

Tears were in his eyes, as he looked
down at his wife as she lay so pale and helpless on the bed.

“I am so very sorry sir.

This is bad, very bad.

I have only seen it a couple of times
in all the years I have been delivering babies.

I have never had a mother that survived, I am sorry to
say.

I think that sometimes
childbirth release bad humors in the mother and poisons their system.

If the baby is already born, the baby
will be fine.

If it happens while
the mother is still carrying the baby then we loose them both.

I am terribly sorry, but there is
nothing more I can do but wait.

For a moment he could not speak past
the huge lump in his throat.

“Are
you telling me that there is absolutely no hope that she will recover?”

Not wanting to give him false hope,
but being honest with him she replied, “I have heard of a few who did survive,
but I have never had one of my mothers who survived the convulsions.

If this is the only convulsion she
suffers, she might live, but if she continues to have more, there is no
hope.

She will grow weaker and
weaker with each one until her body can not longer stand it and she will leave
us.”

John was beside himself.

He sat on the side of the bed and
gathered her as much as he could manage in his arms.

“Please, please my love, please do not leave me.

He began to cry in earnest as he rocked
her in his arms.

“I do not want to
live without you.

You must be
strong and get better.”

His voice
seemed to have a calming effect on her and the jerking subsided.

He continued to hold her for a few more
moments.

It took her a second to
focus on him.

He stoked her face
with tears streaming down his face.

“Johane, please do not leave me.

I love you so much!

The
children and I need you so much.

You have to live for our baby.

He needs his mother!”

“I do not want to leave you, my
love, but if God does take me, I know you will take care of my children.

Little John will need all of your love
if he is to be the remarkable man I expect him to be.

Do not morn me for too long.

You know I want you to live a full life and my children need
a mother.

I love you so much.

You have made me very happy and my life
very complete.”

She reached up to
stroke his face.

John held her hand to his face and
then kissed her palm, just as her body was wracked by another seizure.

This time the seizure continued until
she could not longer withstand the onslaught.

She went limp in John’s arms and her body was stilled forever.

John was inconsolable in his
grief.

Just getting through the
day was almost unbearable.

He felt
bad that he did not even have the desire to be with his children.

It was not their fault that their
mother was no longer there.

In
fact they had suffered just as great a loss as he, they just seemed to be
handling it better.

The Secret of Willow Castle - A Historical Gothic Romance Novel by Burns, Nathaniel
No Rest for the Witches by Karina Cooper
Foggy Mountain Breakdown and Other Stories by Sharyn McCrumb
Unstoppable (Fierce) by Voight, Ginger
Mountain Man by Diana Palmer
Mysterious Warriors: Alone by T. N. Hayden
Ask the Oracle by JJ Black
Shadows and Light by Anne Bishop
The Rancher Takes A Bride by Sylvia McDaniel
Black Listed by Shelly Bell
Our partner