Legends of the Riftwar, Book 1

This one’s for Janny Wurts, who showed me that

two heads often were far better than one.

When I think of Honour, Colonel Donald V

me. When duty called, they served unflinchingly. I

am honoured to call them my friends.

Other Books by Raymond E. Feist and William R. Forstchen 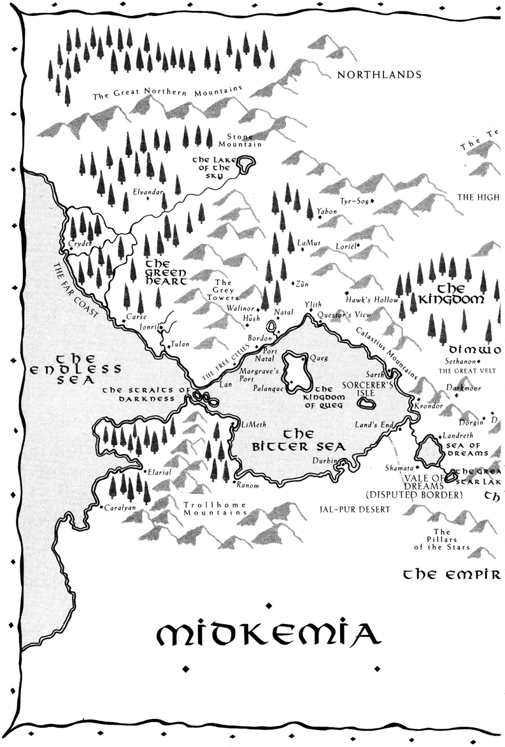 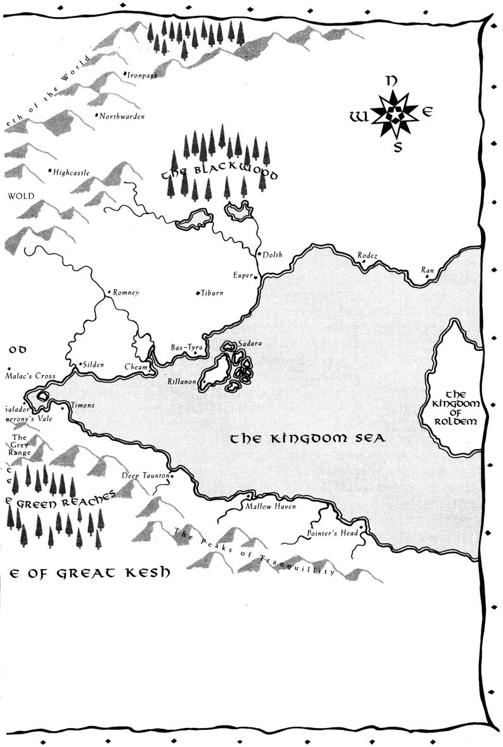 The rain had stopped.

Lord Brucal, Knight-Marshal of the Armies of the West, entered the command pavilion, snorting like a warhorse and swearing under his breath. ‘Damn weather,’ he finally said. The elderly general, still broad-shouldered and fit, ran a gloved hand back from his forehead, getting the damp hair out of his eyes.

Borric, Duke of Crydee, and his second-in-command looked at his old friend with a wry smile. Brucal was a steadfast warrior and a reliable ally in the politics of the Kingdom of the Isles, as well as an able field general. But he had a tendency towards vanity, though.

Borric knew he was getting irritated by the regal mane of hair now being plastered to his skull.

‘Still sick?’ Borric was a striking man of middle years, with more black in his hair and beard than grey. He had on his usual garments of black – the only colour he had donned since the death of his wife many years before – and over this he wore the brown tabard of Crydee, emblazoned with a golden gull above which perched a small golden crown, signifying Borric’s royal blood. His eyes were dark and piercing, and currently showed a slight amusement at his old friend’s bluster.

As Borric expected, the old grey-bearded duke swore an oath. ‘I’m not sick, damn it! Just a bit of a sniffle.’

Borric remembered Brucal when he was a young man, visiting Borric’s father at Crydee, his laughter, with his robust joy and a 1

glint in his eye. Even when his reddish-brown hair and beard had turned grey, Brucal had been a man who lived each day to the fullest.

Today was the first time Borric recognized that Brucal was now an old man.

On the other hand, it had to be said that Brucal was an old man who could quickly draw a sword and do considerable harm. And he refused to admit he was ill.

Brucal pulled off his heavy gauntlets and handed them to an aide.

He allowed another to remove the heavy fur-lined weather-cloak he had worn from his own tent. He was dressed in simple blue trousers and a grey tunic, his tabard left behind in his tent. ‘And this bloody rain doesn’t help.’

‘Another week of this and the snows will be falling in earnest.’

‘According to our scouts, it’s already snowing heavily up north, around the Lake of the Sky,’ replied Brucal. ‘We should consider sending the reserves back to LaMut and Yabon for the winter.’

Borric nodded. ‘We might get one more week of clement weather before the winter storms come, though. Just enough time for the Tsurani to start something. I think we’ll keep half of the reserves close by; I’ll order the other half back to LaMut.’

Brucal looked at the campaign map on the large table before Borric. He said, ‘They haven’t been doing much, lately, have they?’

‘The same as last year,’ said Borric, pointing at the map. ‘A sortie here, a raid there, but there’s little evidence they seek to expand much any more.’

Borric studied the map: the invading Tsurani had taken a large chunk of the Grey Tower Mountains and the Free Cities of Natal, but had seemed satisfied to hold a stable front for the last five years of the war. The dukes had managed one successful raid through the valley in the mountains the Tsurani had used as their beachhead, and since then intelligence about what was occurring behind enemy lines was non-existent.

Brucal blew his nose in a rag used to oil weapons, and then threw it into a brazier nearby. His large nose now looked red and shiny.

The nine-year campaign had taken its toll on him, Borric noticed.

Borric thought back a moment to when the first sightings of the Tsurani invaders had been reported, by two boys at his own keep 2

who had found a wrecked Tsurani ship on the headlands near his castle at Crydee. Later, word had been brought by the Elven Queen of aliens in the forests that lay between her own Elvandar and the Duchy of Crydee.

The world had changed: the fact of an alien invasion from another world via a magic gate was no longer a source of wonder. Borric had a war to fight and win. He had added some marks with brush and ink to the campaign map.

‘What’s this?’ asked Brucal, pointing to a notation Borric had added earlier in the morning.

‘Another migration of Dark Brothers. It looks as if a fairly large contingent of them are moving down the southern foothills of the Great Northern Mountains. They’re treading a narrow path near the elven forests. I can’t understand why they’d come over the mountains at this time of year.’

‘Those blackhearts don’t have to have a reason,’ observed Brucal.

Borric nodded. ‘My son Arutha reported a large force tangled with the Tsurani while they were besieging my castle five years ago.

But those were Dark Brothers driven from the Grey Towers by the Tsurani; they were striking north to join their kin in the Northlands.

They’ve been quiet since then.’

‘That’s a bloody long trek for nothing,’ observed Brucal, as he wiped his nose with the back of his hand. ‘They’re not fools.’

‘The Dark Brotherhood is many things, but never stupid,’ agreed Borric. ‘If they’re moving in force, it’s for a reason.’

‘Where are they now?’

Borric said, ‘Last reports from the scouts near the Elven Forest.

They’re avoiding the dwarves at Stone Mountain and the elven patrols, heading east.’

‘Lake of the Sky is the only destination,’ said Brucal, ‘unless they’re going to turn south and attack the elves or the Tsurani.’

‘It makes sense if they’re trying to get up to the eastern side of the Northlands. There’s a spur of mountains that runs north-east out of the Teeth of the World, hundreds of miles long and impassable. Over 3

the Great Northerns, past the Lake of the Sky, and up a trail back north over the Teeth of the World is a short-cut, actually.’ The old duke stroked his still-wet beard. ‘It’s one of the reasons we have so much trouble with the bastards up in Yabon.’

Borric nodded. ‘They tend to leave us alone in Crydee, compared to the encounters your garrisons have with them.’

Made For Each Other by Parris Afton Bonds
When She Was Bad by Tammy Cohen
The Good Muslim by Tahmima Anam
A Tale of Two Princesses by Ashenden, V.
Crystals by Henry, Theresa L.
The Boy I Love by Lynda Bellingham
Shifter Singles (Dating the Werewolves)(BBW Steamy Paranormal Menage Romance) by Nikki Wild
Serving Crazy With Curry by Amulya Malladi
NYPD Red 4 by James Patterson
Fan the Flames by Katie Ruggle
Our partner