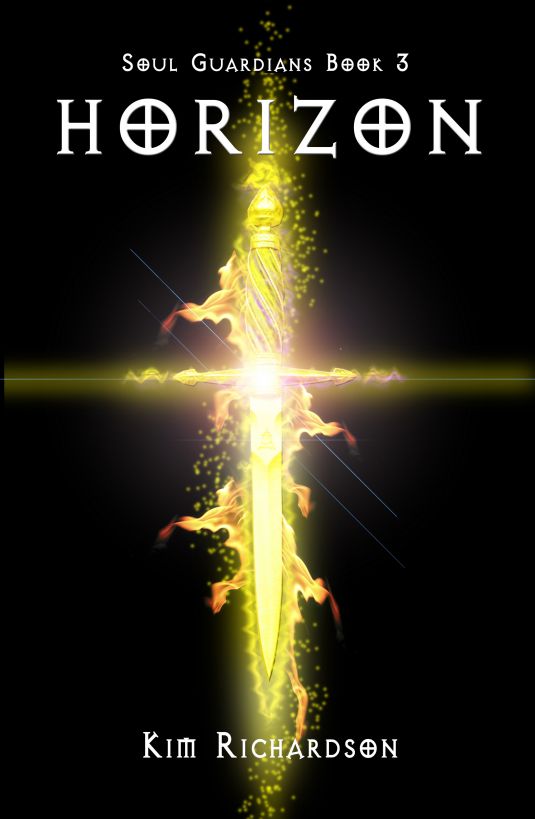 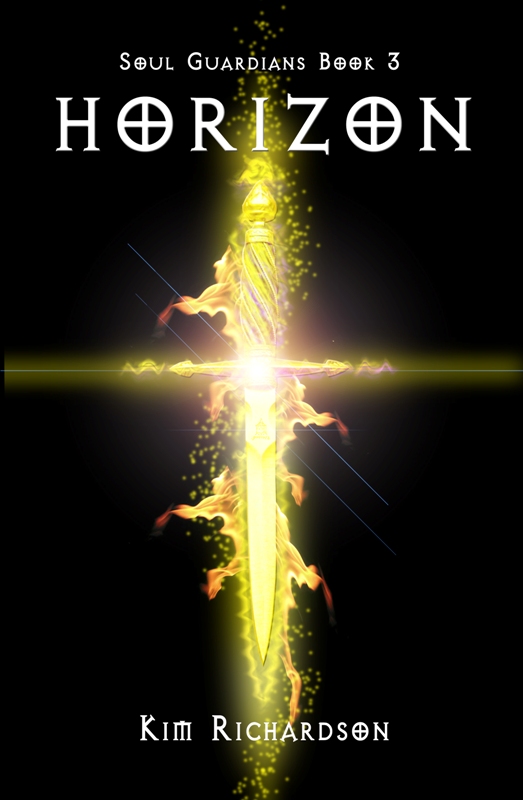 This ebook is licensed for your personal
enjoyment only. This ebook may not be re-sold or given away to
other people. If you would like to share this book with another
person, please purchase an additional copy for each person you
share it with. If you're reading this book and did not purchase it,
or it was not purchased for your use only, then you should return
to Smashwords.com and purchase your own copy. Thank you for
respecting the author's work.

K
ara Nightingale sat on a cold stone floor. She felt numb and
empty, drained of all feeling. She could hear a frayed chorus of
distant moans from the other prisoners, and she wondered when she
would start having hallucinations herself. She didn’t want to lose
her mind to shadows in the perennial darkness of her prison cell.
The voices of the dead and the forgotten were her only
companions.

Over time, the jagged grey walls had
become a comfort to her. She had had no visitors since the
archangel Zadkiel himself had brought her to the prison and thrown
her in the cell. He had ridden on the back of one of the great
eagles, like a knight riding on a powerful steed. She had dangled
below in the bird’s sharp talons, like a prey ready to be eaten.
Zadkiel had been the last person she had seen, and she wondered if
she’d ever see another soul again.

Kara sighed. She grabbed a sharp
pebble and turned to face the wall behind her. She reached up and
pressed the rock into the stone with just enough pressure to make a
small indent and form a rough line. She sat back on her heels and
admired her work. Each mark accounted for one day.

She counted twenty-eight tiny marks.
She wasn’t sure if her calculations were correct; it was hard to
determine time in Horizon, because darkness surrounded her all the
time, and she never saw the light of day. But she figured it was
about right, give or take a few days. But what did it matter
anyway? Angels were not mortals. Time had an entirely different
significance in Horizon. Her very first assignment as a guardian
had taught her that.

She remembered the first
time she had been locked up in Tartarus. She could see David’s
smiling face when he had come to rescue her and had stood at the
threshold of her prison cell. Her
knight
in shining armor
, he had said. But no one
had come for her this time. She had been locked up for nearly a
month, forgotten like an old pair of shoes.

It wasn’t doing her any good to dwell
on the past.

She was amazed she was
still sane. The insane moans and howls of her neighbors led her to
believe that there were at least a dozen others in here, locked
away on separate levels.
How many levels
and cells were there in all of Tartarus
?
She could only guess—thousands perhaps. She wondered how long the
other prisoners had been left to fade away until their minds
couldn’t tell the difference between reality and illusion. How long
until she began to moan and wither away? Perhaps counting the days
kept her mind functioning and sane.

She burned with the desire to speak to
the council and claim her innocence once more. It kept her going.
She hoped that one day soon she could stand up to them and prove
once and for all that she wasn’t a demon spy, but a regular teenage
angel, if such a thing existed. She wasn’t the enemy they accused
her to be. They could trust her. She was one of the good guys,
wasn’t she?

Kara sat back. Her head smashed
against the hard wall. She knew she had really made a mess of
things. She had nearly killed a fellow guardian. Then, she had
escaped from Tartarus, without waiting for her trial. She had
forgotten her mandate to save the mortals and had been preoccupied
with a selfish quest to save her mother’s soul. She had become an
angel vigilante, an outcast from the supernatural world. What the
council would do with her now, she could only guess. Though she
knew it was going to be very unpleasant …

With a sigh, Kara let her head fall on
her knees. She remembered the evil grin on archangel Zadkiel’s
face. Dust and small debris had fallen from the ceiling and into
her eyes when he slammed her prison door shut. His eyes had gleamed
with gratification. Broad wrinkles, like potato chips, had formed
on the top of his bald head. His deep-set black eyes and heavy
brows had mocked her. She remembered wondering why he looked so
satisfied. It seemed to her that the archangel had a personal
vendetta against her and couldn’t wait till she was locked up.
Zadkiel had ignored her pleadings to take her straight to Gabriel.
He had ignored her information about Asmodeus’s plans . . . she
wasn’t even sure he had heard her at all. It was as though he had
become deaf. He wanted nothing more than to shut her up, throw her
in prison and be rid of her for good.

Kara swallowed her resentment. She
shook her head. “I’m so screwed—”

Kara froze. She strained her ears and
realized the voice came from the wall behind her.

Kara turned around on her knees and
faced the wall. Closer inspection revealed a large crack like a
lightning bolt in the jagged rock. The voice came through there.
She edged closer to it.

“
You need to get out of
here, Kara,” said the raspy voice through the fissure.

Kara imagined that the voice belonged
to an elderly man. The image of Merlin, the wizard with wispy white
hair and a scruffy white beard that brushed the floor, popped into
her head. “You need to stop Zadkiel before it’s too
late.”

“
What—? Who are you? And
how do you know my name?” asked Kara. Her lips brushed the sharp
rock wall. She strained to see through the crack, but she was faced
with only a shadow.

There was a moment of silence, and
then the man spoke again.

“
I heard the guards talk
about you before. I know you are the guardian angel, Kara
Nightingale. I also know that you are different from most angels,
and that you possess unique and incredible powers, powers that
frighten and anger the High Council. You have many enemies in the
Legion, my dear.”

Kara heard the stranger
clear his voice, and then he spoke again. “I understand this is
your
second
time
in Tartarus, and that you are Asmodeus’s daughter.”

Kara flinched at the last words. It
was strange to her how the man had said it so matter of factly, as
if it was common knowledge amongst all the prisoners. She found
herself wondering if this man was another nut job and if some of
his sanity still remained. Would he be the kind of nut case that
never shuts up and keeps rambling on forever? Would his ramblings
accompany her till the end of time or until she lost her mind all
together? He knew who she was. Perhaps the other prisoners weren’t
so insane.

“
My name is Legan,” said
the stranger. His voice was soft and kind, not at all the tone of a
rambling madman.

He continued, “… and what I
have to tell you now is very important. You have to promise to tell
the council
exactly
what I’m about to tell you. You cannot forget a single
detail. Promise me, Kara.”

Kara straightened. She couldn’t help
but be astonished at what she heard. “Um … nice to meet you, Legan.
But what are you talking about? What is it exactly you want me to
tell the council? It’s not likely I’ll ever get out … so you might
be wasting your time. I have a feeling I’ll be stuck in here for a
very, very long time.”

Kara heard the shuffling of feet, and
then a soft plop. She knew Legan had just sat with his back against
the wall. She pressed her cheek against the wall and felt a cool
tingle against her angel skin. The prisoner was silent again behind
the wall. Kara wondered if he was preparing his next words
carefully, to try and persuade her somehow.

“
You need to tell the
council,” said Legan finally, “that Zadkiel is a
traitor
,” he
hissed.

Kara noticed the disgust in the
pronunciation of Zadkiel’s name, as though the name itself rotted
in his mouth. She had never liked the archangel Zadkiel; he had
always made her feel unwelcome and grotesque. He had called her
demon filth more than once. Kara smiled and felt an immediate
empathy towards Legan for hating Zadkiel, too. Perhaps they could
be friends?

“
Never liked him,”
announced Kara. “He always gave me the creeps. A traitor you say?
Are you sure?” She crossed her fingers. “You got proof?”

“
Not yet,” answered Legan,
and Kara heard the disappointment in his tone. “He has all the
council fooled. But
I
wasn’t fooled. I know which master he truly serves. That’s
why I ended up here. He knew I was on to him. He had to get rid of
me, you see. I was about to reveal his
mark
.”

Kara shivered at the mention of the
mark. The demon mark was the symbol of loyalty to the demon lord
who had made it. A nasty angry scar, a demon’s mark, like a
spider’s web, had wrapped around her ankle once. The entire Legion
had accused her of being a demon spy because of it. David had
pulled away from her when he saw it. She recalled his angry and
confused face when she had shown him her ankle. She had just
brushed it off as if it were nothing. She could never have imagined
the chaos it would cause later on. Although the archangel Raphael
had removed her mark, she couldn’t remove the distrust it had
caused. The damage had been done; she knew some angels would never
trust her ever again.

“
Where is he marked?” asked
Kara abruptly, her voice higher than she would have wanted. She
couldn’t imagine where the mark would be on him. Clearly, it was
cleverly concealed.

“
I do not know,” said
Legan, and Kara heard him sigh. “The mark is hidden well on him.
How he managed to conceal it, I cannot tell though he must be using
some sort of illusion to mask it. A cloaking device of some sorts,
I am not sure. But I know he is marked!”

Kara bit her lip. She questioned
Legan’s story. Maybe Zadkiel had locked up the old man, and he
wanted to get back at him somehow. Getting involved with a madman
couldn’t help her present situation, she knew. With a sigh of
resignation, she pushed herself off the wall slowly and sat back
down with her back against the jagged rock. She didn’t want Legan
to hear.

“
You do not believe me,”
Kara heard Legan say after a few minutes of silence. “You think I’m
a crazy old fool, don’t you? You believe I made this all
up.”

Shot in the Back by William W. Johnstone
Bottled Up: April Fools For Love by Roxy Mews
November by David Mamet
Summer on the River by Marcia Willett
The Lost Witch by David Tysdale
The Siren Series 1: Ember by Marata Eros
Lissa- Sugar and Spice 1.6 - Final
False Future by Dan Krokos
The Mortal Instruments - Complete Collection by Cassandra Clare
Hook and Shoot by Brown, Jeremy
Our partner