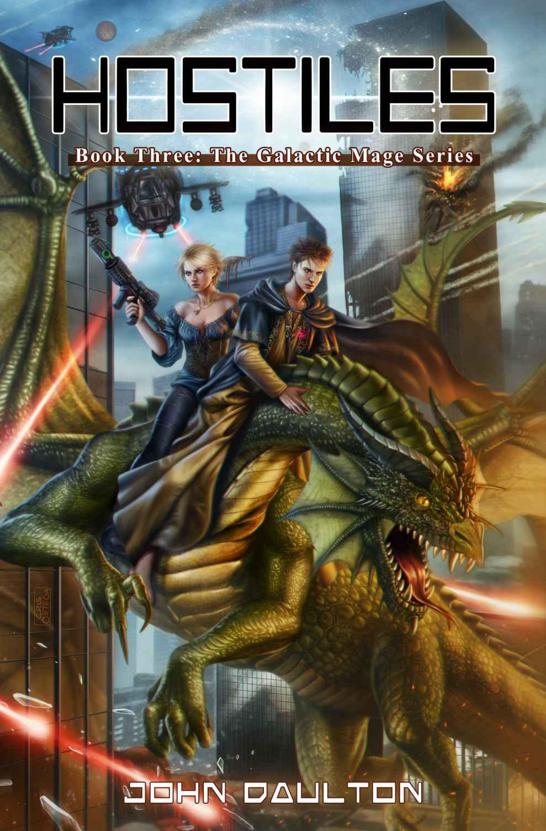 Book 2: Rift in the Races

This is a work of fiction. All characters and events portrayed in this book are fictitious. Any resemblance to real people or events is purely coincidental.

The phrase “The Galactic Mage” is the trademark of
John Daulton.

For Mom, who believed in me long before I did. 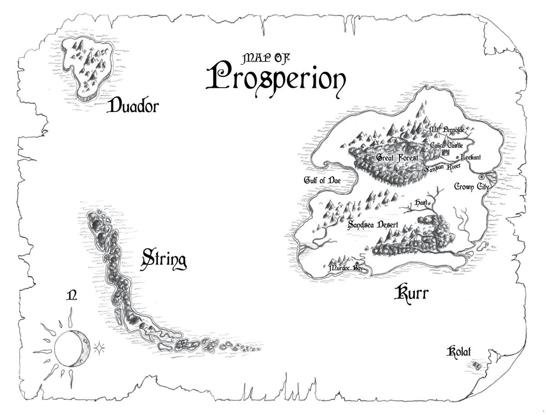 G
romf crouched behind a stalagmite, binding a long cut on his forearm with a strip of deerskin. He thought about healing it, but his last glimpse into the mana pool showed the stuff of magic waning. He didn’t want to waste any of it repairing this minor wound. If he were going to win, he’d need that mana later. Besides, healing was a cowardly thing for an orc to do, an act of last measure, of desperation. Gromf was hardly in a position for that.

He tied off the wrap with his free hand and his teeth, his thick green fingers nimble and efficient at the work. When it was done, he risked a look back down into the arena, a vast expanse of empty aquifer, though filling rapidly with the dark blood of so many dead and dying orcs. Thousands lay strewn about, twisting and moaning, their bodies like a bed of fallen leaves that have found the lungs for agony. A pile of them had formed at the center of the cavern, an enormous heap, at least a thousand corpses, mounded high and surmounted by the current holder of the yellow stone: Drango-Kal, a shaman of the sand orcs.

Gromf saw him and shook his head. It was a mistake for Warlord to bring that clan to this holy event. Sand orcs would never hold to Discipline.

None of that mattered now. Drango-Kal had the stone, and somehow he had made it work for him. He stood atop the mountain of dead competitors and roared defiantly.

Gromf wished he could cast an ice lance. It was a favorite spell of the humans for good reason. Low mana, reasonably quick to cast. But he dared not do it. If he sent one, Drango-Kal would know where he was, would trace the line of its flight back to Gromf. And so would any number of the stupid hundreds down below.

He let his yellow eyes slide up the dark face of the opposite wall, far off, where the golden light of torches flickered and shaped a long rectangular balcony high above the embattled cavern floor. Warlord watched from up there, he and his high shaman, Kazuk-Hal-Mandik, a detestable withered old husk. Gromf would let them know what he thought of this when the time came. And he would get his due. But first he must win.

He watched as a knot of twenty gray orcs from the western tribes moved in to wipe out six idiots from his own clan, one of his whelp mates among the doomed. They should have known better than to get themselves cornered. Stupid. Undisciplined.

The grays fell upon the six with howls of victory echoing up at him. Gromf shook his head at the stupidity of his race. Then he began his ice storm spell.

The icicles fell like a rain of spears, hurtling down amongst the flailing motions of the gray orcs with their fists and their clubs and their rods of coarse iron beating upon the green flesh of the local tribe. The meaty mash of their blows stopped suddenly as the first, then the second, and a third gray cried out in pain and alarm. Some looked up to see what fell upon them, and the rough shafts of ice slipped through the soft balls of their eyes like fork tines into salmon eggs. Mouths wedged open and jaws broke. Skulls gave way to the force of gravity and icy element, and in moments, Gromf had his own small mountain to stand upon.

Twenty-six down, he thought. So easy. But not with the yellow stone. It had to be
with
the stone, or the victory wouldn’t count. That was the only rule, the entire contest: master the stone and take a place at the high table when all the others were dead.

Right now, it was Drango-Kal holding it. And the mounded corpses upon which he stood suggested he’d found something like mastery.

Gromf climbed down from his perch and took up an iron rod from one of the fallen grays. He looked at it in the dim light of ten thousand torches running at even intervals around the vast arena, God’s Cauldron, his people called it. The metal was rough, almost like stone, and black as an old woman’s teeth. The heft was good, but he was embarrassed for his people anyway, even if it was a weapon of the grays. No wonder the humans owned the open places beneath the sun. No wonder they ate the fat meat of the mammoth and the wooly rhino while his people ate wolf and wolverine. “We deserve the scraps,” he spat as he flung the crude iron aside. He would not stoop to using it. If he could not have steel, he would rely on magic and teeth.

Drango-Kal upon his mountain of gore was being rushed by a group of thirty orcs, several green-fleshed northern orcs, a handful of grays and three of the sandy-skinned southerners from Drango-Kal’s own clan. They came from all sides, clamoring over the bodies, their big hands groping for handholds, their feet driving into the soft purchase of fallen comrades and enemies alike. The bodies rolled and shifted beneath the powerful press of their growling ascent, slowing them, giving Drango-Kal time.

He laughed at them, cried down a boast in the secret cave language of his people, and then, with not enough time to chant, at least not by Gromf’s measure, filled the air with lightning of a kind Gromf had never seen. A ring of it. A cylinder of it, a great barrier of floor-to-ceiling electricity that sparked and danced and hissed in the air. This arcing, sparking formation perfectly encircled the mound of bodies upon which Drango-Kal stood and then began to rise, to constrict, a choking grip of blue-white lightning growing tighter, moving slowly inward, upward, in pursuit of the attackers climbing to the top.

The curving wall of electricity came upon the clambering orcs in an instant, closing in on them and popping them like kettle corn. Gromf could hear it from where he was, the hissy
pifff
as they burst from the inside out, turned to breezy gusts of blood and steam.
Pifff. Pifff. Pifff
. Thirty of them, just like that. They were gone before he could really fathom what he had just seen, before he could put some kind of context on a magic spell like that. And before he had, he found himself blinking into the blackness, the lightning stain on his retinas blinding him even after the spell was done.

Drango-Kal’s laughter came to him across the expanse of darkness. Gromf blinked and covered his eyes, hoping to speed them back to sight.

“Do you see me, Warlord? Do you see me, old shaman hiding in his wing? I am Drango-Kal of South Rock. I am the master of the yellow stone. Prepare my feast and wash a fat woman for me, for I come tonight to sit at the table of Discipline and respect.”

Gromf shook his head and grinned as he listened to the taunts of the sand orc.
You have no concept of Discipline, you fool
.

He muttered a brief spell of darkness, an illusion to hide him, making himself invisible, then snuck his way along the rock face that was the eastern wall. He wanted to understand what he could of the yellow rock before he took it from Drango-Kal. He wanted to observe. Its power was obvious. And not only by the nature of that impossible lightning wall, or even by the monstrous fireballs and hideous transmutations that he had seen during the last two days of this combat. No, the real demonstration of its power was the fact that Kazuk-Hal-Mandik wasn’t using it himself. Gromf had the advantage of being a clansmate of the dried-out old warlock. He knew the elder would never have given such a treasure over for the purpose of sport, not even one meant to find a successor, as he claimed. No, Gromf was not so stupid as that. Gromf was a new orc, an orc of Discipline. He would think first if he could. And his thought was that Kazuk-Hal-Mandik was afraid of it, afraid of the yellow stone.

Another of Drango-Kal’s clansmates ran up the mound at him. “Drango-Kal, the great one. I will stand by you,” called the dusky orc as he stumbled and crawled toward the ruler of the heap.

Gromf shook his head, once more ashamed of what passed for guile amongst his people. He was glad that Drango-Kal was not stupid enough to fall for his clansmate’s ploy.

“A harpy’s tongue won’t save you, Lod,” said Drango-Kal. “Save it for God.” Gromf watched as Drango-Kal mouthed two short words. A blinding stroke of lightning came, huge, thick as the orc’s head, and drew the jagged line in the darkness that burst Lod into yet another puff of steam.

Gromf was not a conjurer of lightning, so he had to think very hard about what he knew. Lightning was common enough magic. Easy for some, if not for him. But he’d seen it before and it was never like that. Not thick like that. The bolts should be slender, narrow streaks of light, drawn flat upon the air like the cracks in breaking ice. He’d never seen them wide and fat before, not thick bands of glare like Drango-Kal had cast.

So this was the effect of the yellow stone. It had to be. And only two words. The stone made magic fast. And big. That had to be what it did, and that made it very powerful.

So why would Kazuk-Hal-Mandik be afraid? What orc should fear power? That was not in keeping with reason, much less in keeping with Discipline. He knew there was something he was missing.

The sound of breathing came behind him, disrupting his thoughts. He turned and saw an orc of his own clan coming toward him along the wall. Another of his whelp mates, the one with the tattered ear. Gromf would not speak his name, would not think it. This was a mate stealer, a
doh-ruek
. That ear was the price of his shame. Gromf would be glad to see him die at the hands of Drango-Kal’s lightning.